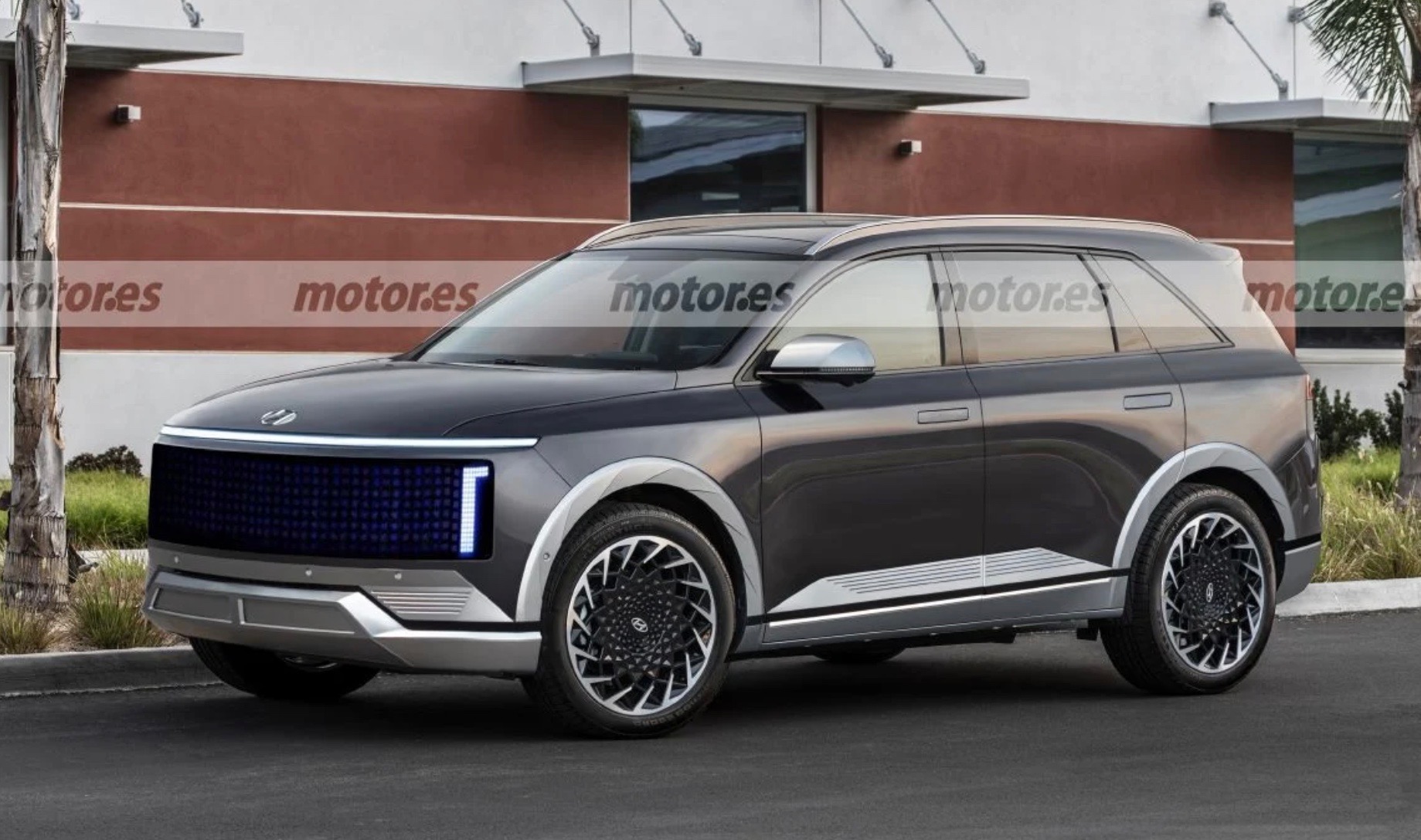 Check out this for an interesting design concept. Hyundai has confirmed it is working on an all-new fully electric large SUV, which will be called the IONIQ 7, and this rendering could give us a preview of what to expect. 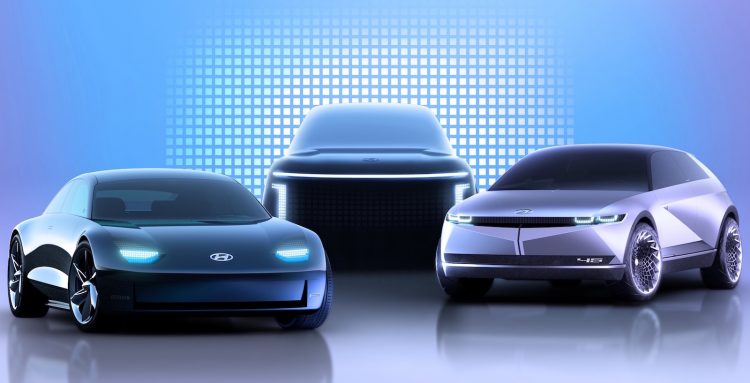 The IONIQ 7 will be the third model under Hyundai’s recently-divided IONIQ sub-brand, with the 5 hatchback set to launch in Australia in just a couple of months. There’s also an IONIQ 6 on the way, which looks set to be a four-door coupe about the same size as BMW’s i4. It will arrive some time in 2022.

There’s no question around the overall appeal of the IONIQ 5’s retro design language. We were all surprised (and excited) to see the production version carry through the cool theme of the initial 45 concept. Here (below), motor.es has produced a digital depiction of what the 7 could look like, clearly using the 5 as inspiration. 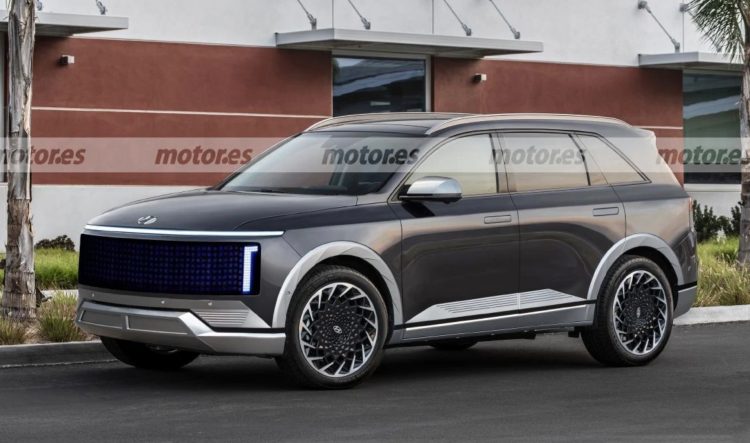 We love the classic mesh-style wheels, while the full-width daytime running light at the front seems plausible given the new Hyundai Staria features a similar arrangement, and even Hyundai’s official preview (at top) shows it. We’re not sure about the full-width pixel headlight system below, which fills the entire grille area. Imagine the repair costs in an accident.

The same clean lines and flat surfaces make up the body panels, similar to the 5, with emphasised wheel arches and lower skirting in metallic-like grey. Topping it all off are a set of flush door handles that likely pop in and out automatically. 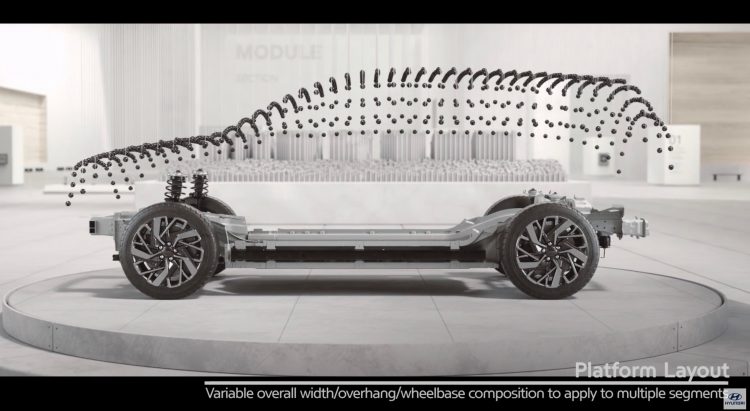 It will be a very interesting model for the popular market segment. At the moment there are no competitors in terms of fully electric, large seven-seat SUVs in the non-premium class. Hyundai hasn’t confirmed much at this stage, unfortunately. In 2020, the company said:

“In 2022, Hyundai will introduce IONIQ 6 sedan, which is based on the company’s latest concept EV ‘Prophecy’, unveiled in March; followed by IONIQ 7, a large SUV in early 2024.” 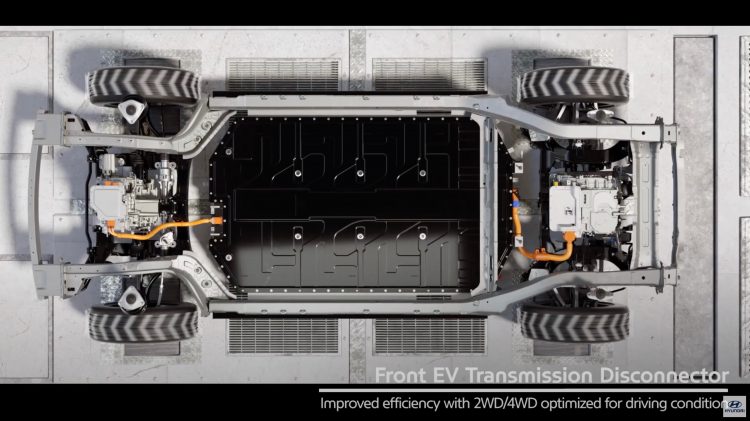 The 7 will ride on Hyundai’s new E-GMP architecture, just like the 5 and 6, and the upcoming Genesis GV60, as well as products from Kia such as the EV6. This modular platform has been developed to cater for a variety of vehicle templates, while supporting both rear- and all-wheel drive electric motor setups, and even the possibility of a front motor disconnector system to conserve battery levels when AWD isn’t needed. More on the platform in the video below.

It’s expected to feature a stretched platform compared with the 5 and 6 models, opening up space inside for three rows of seats. Some speculations suggest the model will be as big as or even larger than the Hyundai Palisade. This will help it fit in with the American market. As such, production is set to take place in the USA, at least for models sold in that market.

As for the performance, well, we only need to look at what other electric vehicles are offering for some clues. Even the new Kia EV6 GT, with its 430kW and 740Nm dual-motor system and 77.4kWh battery, capable of dusting off 0-100km/h in jus 3.5 seconds. We’d imagine Hyundai will fit a similar package to the IONIQ 7, with a range of up to 650km. Being a bigger and heavier vehicle though the sprint time might be extended somewhat, but it’ll still be very quick, no doubt.

More details are expected to trickle out over the coming months, particularly as the IONIQ 5 rollout commences around the world; during launch events company staff are usually interviewed and questioned by the media and info is leaked out or even straight-up confirmed.