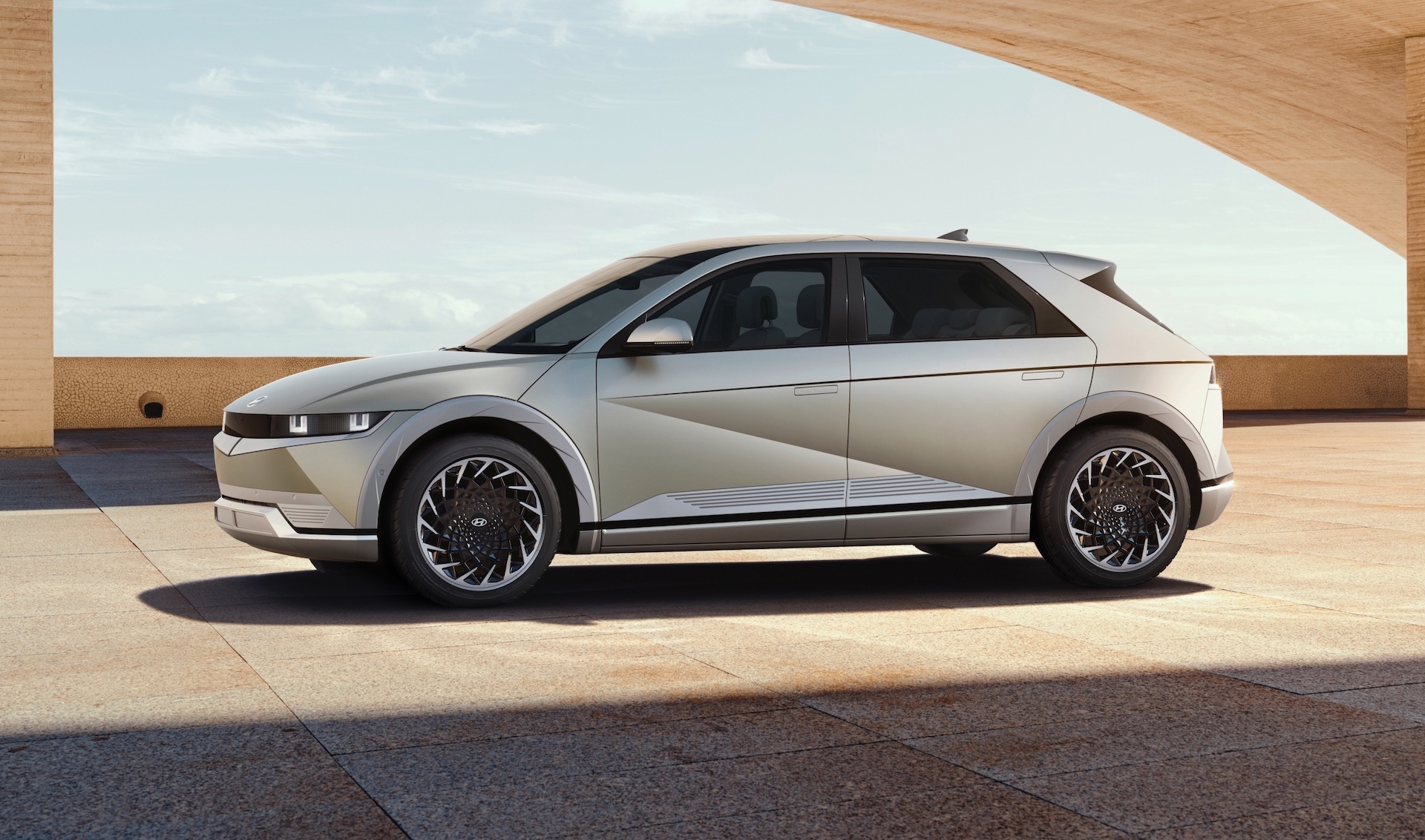 This is it. The highly-anticipated 2022 Hyundai IONIQ 5. This is the company’s brand new electric vehicle, designed and developed from the ground up as a next-generation eco-friendly yet practical and innovative car. It’s also described as redefining the electric mobility lifestyle. 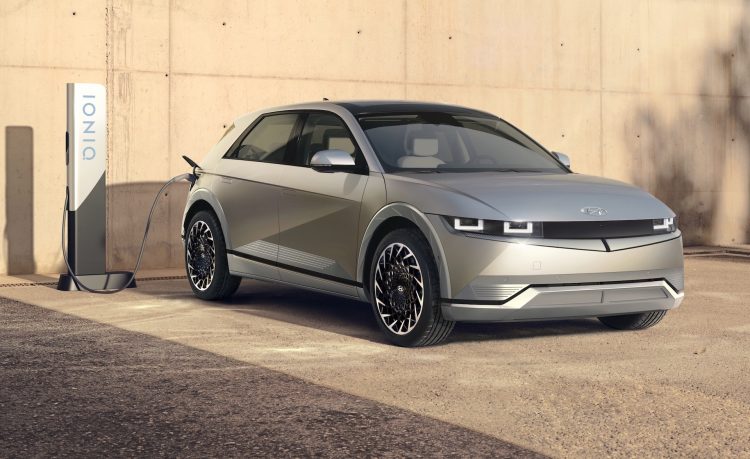 The design is inspired by the 45 concept, which was designed to celebrate 45 years of Hyundai. And, excitingly, it carries much of the styling theme of that concept straight over to the production version. Flush door handles, Hyundai’s first clamshell bonnet, retro-inspired pixel headlights and taillights, and a classic hatchback profile certainly place in into a unique section of the market. Speaking about the design, SangYup Lee, senior vice president and head of Hyundai Global Design Center, said:

“A new mobility experience for the next generation—this was the mission from the first day we began this project, to look ahead towards the horizon, but stay fundamentally Hyundai. IONIQ 5 is the new definition of timeless, providing a common thread linking our past to the present and future.”

If you love the exterior, you’ll adore the interior. Not only are most of the common touch points, such as the seats, floor, and arm rests, made from eco-friendly and recycled materials, the cabin is filled with unobtrusive technology. Hyundai calls it a “living space”, as the cabin is designed to be a welcoming environment for all passengers. As such, it debuts a moving centre console that can slide back and forth by 140mm.

There’s also a completely flat floor for a clean and uncluttered feel, while the hatchback layout provides wagon-like practicality. In the back is a 531-litre boot, which can be expanded to 1591L with the rear seats folded down. There’s also a front boot offering 57L in RWD form, or 24L in AWD form. 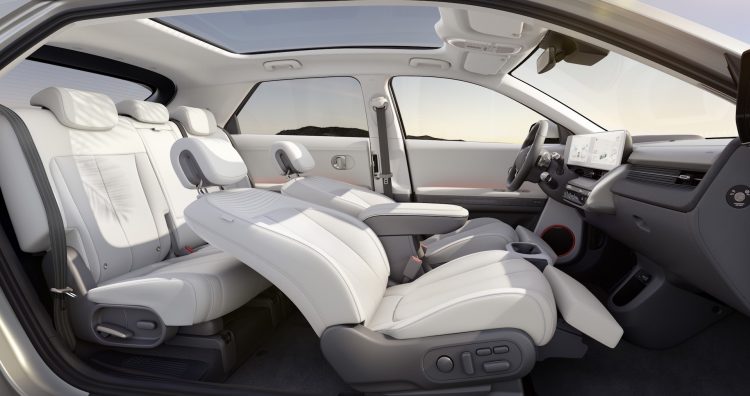 As for the dash, it’s made up of twin 12-inch digital screens, with an Augmented Reality Head-up Display (AR HUD). Hyundai says the AR HUD essentially turns the windscreen into a display screen. The IONIQ 5 also debuts futuristic side cameras in the place of conventional mirrors, with digital screens placed at each end of the dash. However, these are likely to be available in select markets only where laws permit.

The IONIQ 5 has a wheelbase of 3000mm, which is quite long, pushing the wheels to the far corners for optimum space efficiency but also optimum driving dynamics. Overall length is measured at 4635mm, making it longer than the current Tucson (4480mm), with a width of 1890mm and height of 1605mm. 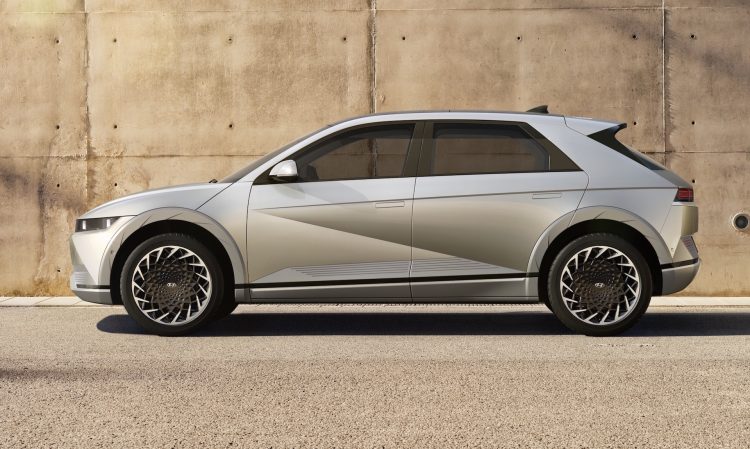 If its performance you want, the Long Range RWD produces 160kW and 350Nm, with 0-100km/h coming up in 7.4 seconds. However, the flagship Long Range AWD develops a combined 225kW and 605Nm, slashing the 0-100km/h time to a claimed 5.2 seconds. These are some impressive figures for a practical hatchback. 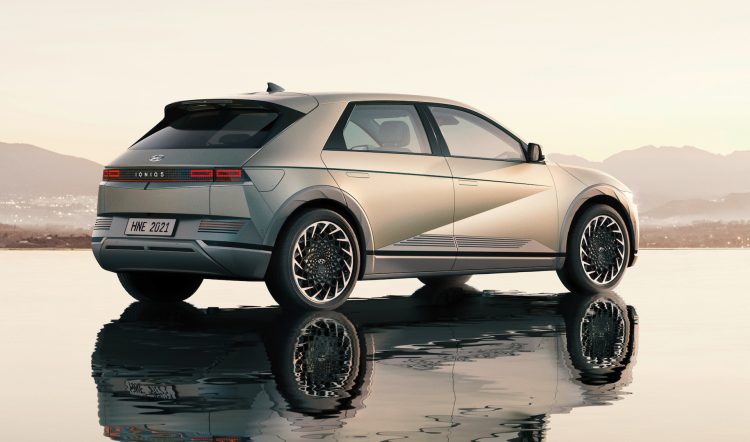 The full range figures haven’t been provided, but according to the WLTP test cycle the RWD Long Range model offers a range of 470-480km. Again, that’s quite decent for a practical EV. And the IONIQ 5 accepts both 400V and 800V charging systems, with 10-80 per cent charge achieved in as little as 18 minutes. Up to 100km of range can also be achieved with just 5 minutes of charging, with the right socket.

Hyundai Australia says the new model will go on sale locally during the third quarter of this year. See below for the highlight specs and features – these may vary for different regions.