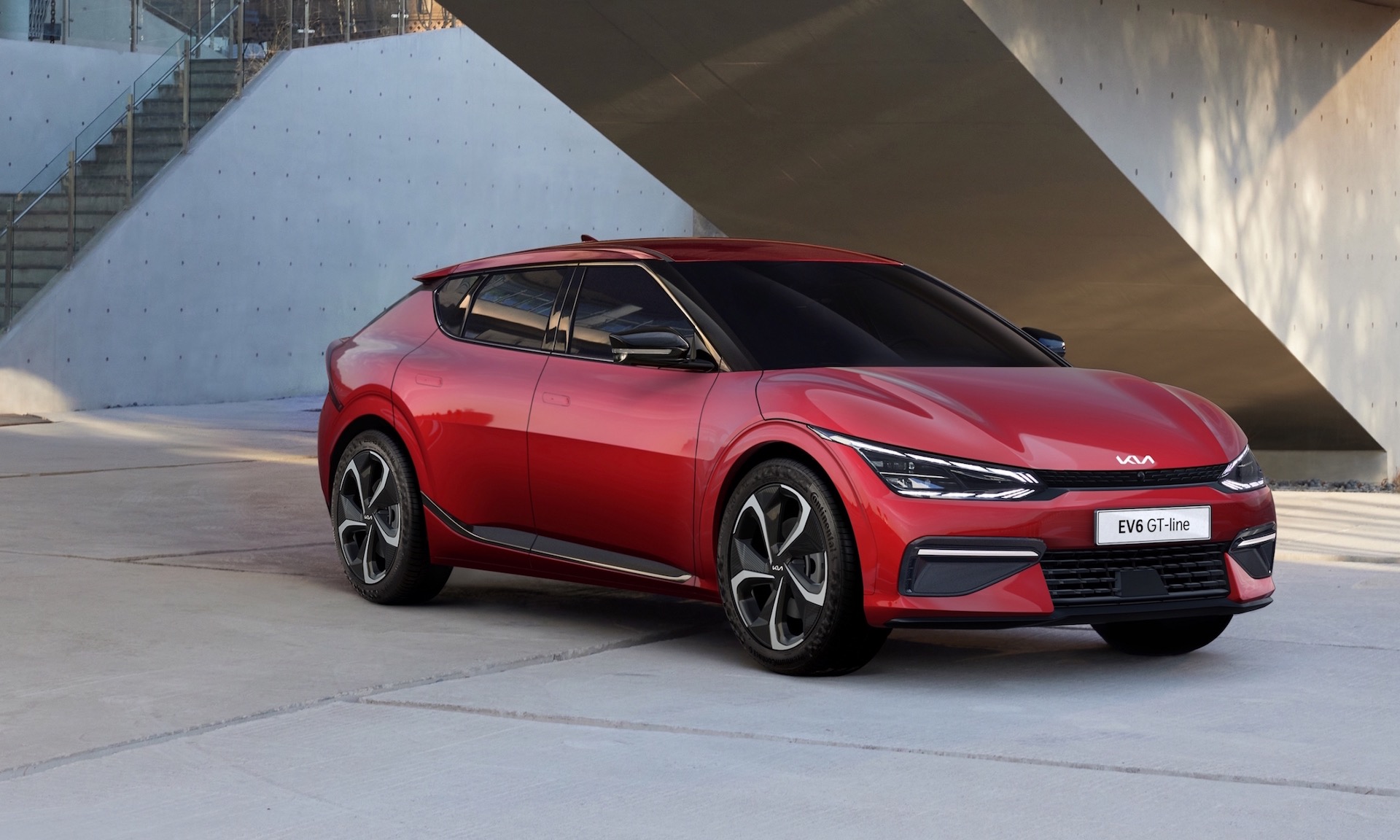 Following the initial unveiling of Kia’s new EV6 fully electric hatch, the company has now confirmed and indeed revealed the sportier GT-Line and GT versions. The full specs are also confirmed for all variant levels, including a 0-100km/h time of just 3.5 seconds. 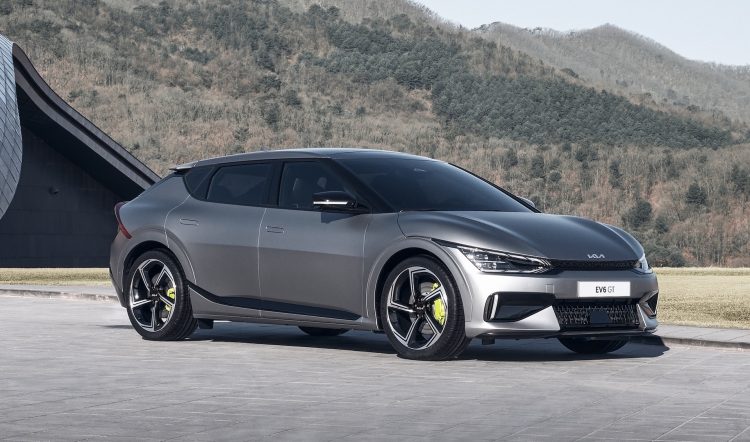 The EV6 is the first vehicle for Kia based on Hyundai Motor Group’s special EV-dedicated platform known as E-GMP (global modular), and it shares some key characteristics and components with the Hyundai IONIQ 5. That includes rear- or all-wheel drive running gear, with electric motors producing up to 225kW and 605Nm. Even the 0-100km/h time is the same, at 5.2 seconds for the best-specced main variant.

However, the new GT version is an even sportier proposition, with no Hyundai equivalent (at this stage). It follows a long line of GT products from Kia that we’ve seen over the years, including the Stinger GT, Cerato GT, and Picanto GT, all featuring a boosted engine and some kind of sporty exterior and interior treatments. Well, it’s the same sort of thing with this EV6 GT. A GT-Line variant is also being confirmed today, which will come in as an intermediate step. 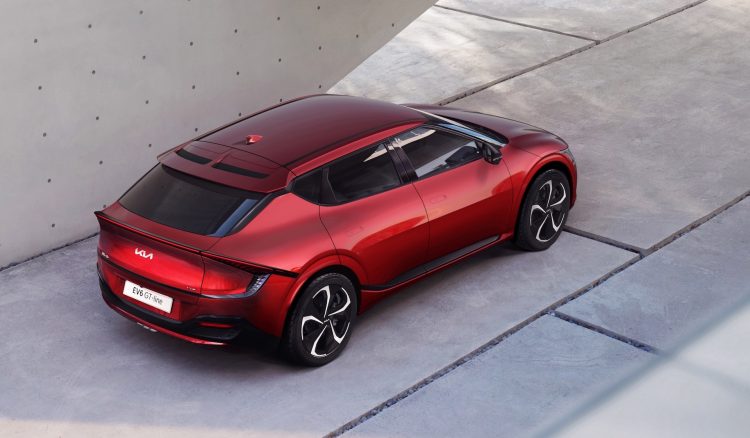 Although the EV6 was revealed earlier this month, the full detailed specs were still under wraps. Now, Kia confirms the new model uses an electric system that is capable of being recharged at 400V or 800V, supporting standard and long range battery setups. These feature a battery capacity of 58kWh and 77.4kWh, respectively. The GT-Line will be available with both, while the GT will come with the long range setup only.

At the entry end of the range, the EV6 with the 58kWh battery will be available with either a 125kW/350Nm single motor for the rear wheels, or a pair of motors that produce 173kW/605Nm combined, for the front and rear wheels. In this latter AWD configuration Kia says 0-100km/h comes up in just 6.2 seconds.

At the top of the range, the GT version comes with a whopping 430kW/740Nm dual motor setup, with the 77.4kWh battery. Kia says this variant offers a 0-100km/h time of just 3.5 seconds, making it one of quickest non-premium vehicles in the world, outright. In fact, Kia has put together a drag race between a prototype EV6 GT and a number of super sports cars, including a McLaren 570S, to show us the performance – see the promo video at bottom of story (at the 12:20 mark). 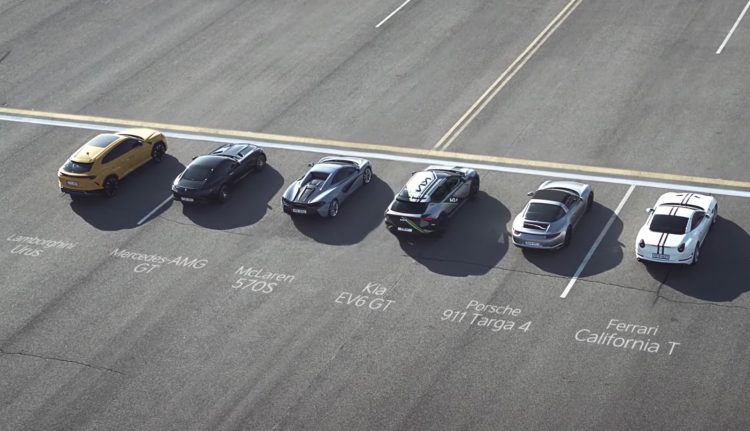 “The GT version of EV6 demonstrates our technological leadership through its combination of outstanding high-speed charging and acceleration performance like a super sports car. With our dedicated EV platform, there is no need for compromise between inspiring spaciousness and performance.” 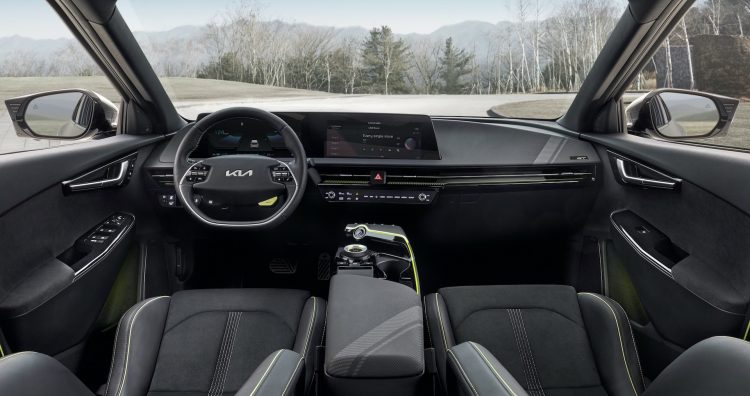 In terms of recharging, users can expect to go from 10-80 per cent battery level in just 18 minutes using an 800V system. It also provides 100km of range in just 4.5 minutes of charging using this type of charger. And thanks to the clever V2L (vehicle to load) capability, users can utilise the energy reserves to power external toys and accessories. For example, a 55-inch TV, air-conditioner, and other gadgets. It supples up to 3.6kW in this way.

Despite the impressive performance and stats, the Kia EV6 will also be a practical vehicle as per the brand’s reputation. For example, boot space is rated at 520L, or up to 1300L with the rear seats folded. There’s also 52L under the bonnet in RWD configuration, or 20L in AWD. Other highlights include the availability of a 14-speaker Meridian sound system, over-the-air update capability, augmented reality head-up display, and dual digital screens across the dash.

The Kia EV6 will go on sale later this year. Exact specifications and availability of variants are yet to be confirmed for Australia. Prices are also still under wraps.

*The vehicle specifications and features in this press release may vary depending on country/region.