The highly-anticipated Hyundai IONIQ 5 will be unveiled on February 23, the company has confirmed. So to build the excitement a teaser image has been released giving us a glimpse of the “spacious and versatile” interior.

This will be Hyundai’s first dedicated fully electric vehicle model, and first to be launched under the new IONIQ sub-brand. Yes, Hyundai already offers a model called the Hyundai Ioniq, but since that car arrived Hyundai has decided to launch IONIQ as a separate brand dedicated to electric vehicles only.

The 5 will be the first to arrive, with IONIQ 6 and 7 also on the horizon. These will be underpinned by the group’s new Electric Global Modular Platform (E-GMP), which is also set to form the basis for electric Kia models, and models from Genesis such as the purported GV60.

In terms of the 5, this will be a very interesting vehicle. Design inspiration comes from the 45 concept car of 2019, showcasing a large hatchback-like profile. In fact, Hyundai says the E-GMP layout allows for a longer wheelbase compared with mid-size SUVs. This, along with a flat floor, should provide a very spacious and practical interior.

As indicated by today’s teaser image, the IONIQ 5 will feature an innovative centre console that can slide back and forth. Called a “Universal Island”, the system is described as the centrepiece of the 5’s interior. The console contains a large storage tray and dual cup holders, while the dash shows dual wide digital screens. Speaking about the car, SangYup Lee, senior vice president and head of Hyundai Global Design Centre, said:

“IONIQ 5 is a statement of design that offers an optimistic look at what customers can expect in the new EV era. The long wheelbase is translated to a new dimension of space. We designed this special space as a perfect place to recharge, your home away from home.” 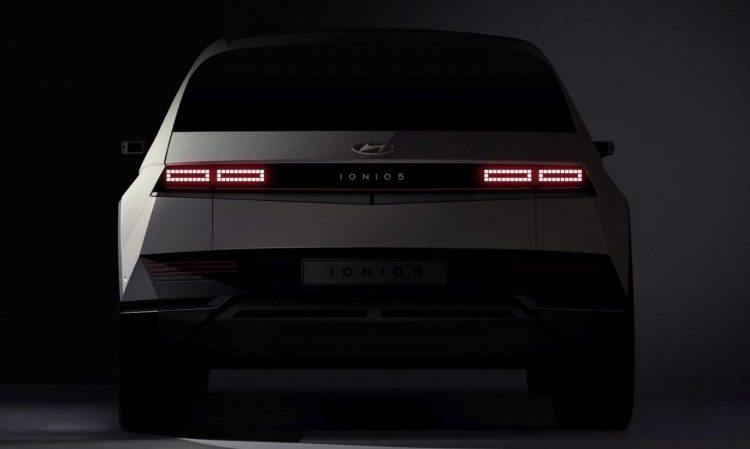 Hyundai also says the seats can be repositioned, ensuring maximum practicality, while the front seats feature leg rests so passengers can sit back and relax when the vehicle is being recharged. A lot of the interior is made using eco-friendly and sustainably-sourced materials too, including seats wrapped in eco-processed leather, and sugar cane bio components, wool, poly yarns, and woven fibres from recycled PET plastic bottles also used.

No further details have been revealed regarding the powertrain. However, an earlier leak seems to have confirmed at least two options; a base rear-wheel drive setup and an all-wheel drive option. Power output is set to peak at 231kW, with a full-charge range of 510km on the WLTP cycle.

This is probably just the beginning in terms of teasers, with Hyundai likely to trickle out more details on design and features in the lead up to the February 23 debut.