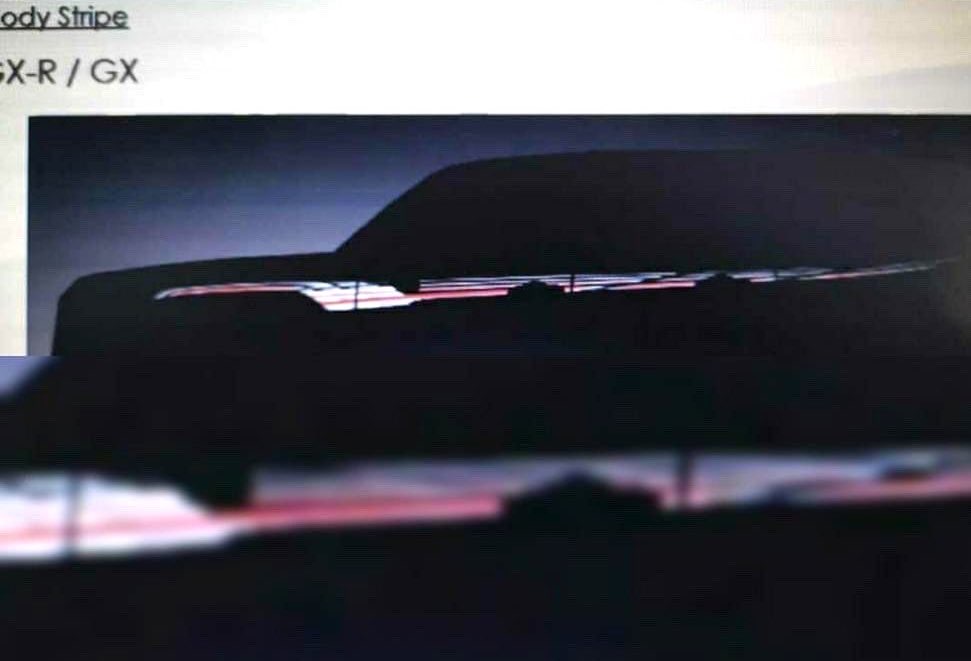 Yet more snippets of potential detail on the all-new 2022 Toyota LandCruiser 300 Series has found their way online. This time we get a glimpse of the exterior side profile, as well as more hearsay to add to the ever-growing pile of unclear information. 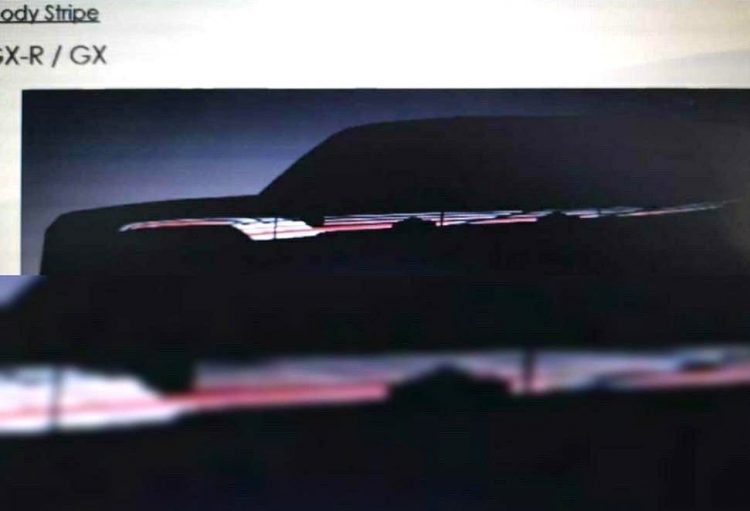 To be honest, it’s a pretty vague glimpse of the side profile. However, it is possible to imagine some of the body lines and contours. The image, surfacing on Instagram, is apparently taken from a dealer catalogue for the Middle East market, and seems to confirm GX-R and GX variant levels. At least for that market.

In showing what is probably an optional body stripe accessory, it’s clear to see the outline of the new slab-like body. And one of the main things we notice is the completely flat and horizontal bonnet line. Now obviously there could be a bulging section in the middle, just like the current model, but it’s interesting to see this runs all the way to the grille. If there even is a power bulge.

The front end also appears to be quite square, however, we’re guessing the headlight area is recessed somewhat, with a protruding wheel arch also set back, although not shown due to the darkness of the image. You can just see the completely flat and straight roofline as well, and the squared-off tailgate. (Current 200 Series side profile shown below for reference, and speculative rendering further below by Mag-X.)

As far as we know the new model will be based on a form of the TNGA platform, featuring a traditional ladder-style setup. According to reports, the overall body length is said to grow 20mm, with 50mm added to the wheelbase. About 5mm is also set to be added to the width.

So, what other juicy details do we have on the specs? Well, there’s talk of the 1GR-FE 4.0-litre petrol V6 coming in known as the GRJ 300 for the new LandCruiser, at least for some markets, as well as the V35A-FTS 3.5-litre twin-turbo V6 from the Lexus LS 500, known as the VJA 300 for the LandCruiser.

The latter engine is set to replace the 4.6-litre naturally aspirated petrol V8, which has since been discontinued from the Australian 200 Series lineup. In the Lexus the V35A produces 310kW and 600Nm, which is a lot more than the last 4.6 we got here that developed 227kW/439Nm.

Lastly, and perhaps most interestingly, Toyota is almost certain to introduce a new 3.3-litre turbo-diesel engine, known as the F33A-FTV, or FJA 300 for the LandCruiser 300 Series. It’s understood the F comes from TNGA-F, which is the company’s latest platform for trucks, while the A could represent being part of the latest ‘Dynamic Force’ engine family; for example, the RAV4 Edge features the A25A-FKS 2.5-litre Dynamic Force engine.

As for the FTV, that simply refers to DOHC, turbocharged, and common rail diesel injection. There has been rumours this could be a four-cylinder engine, but a V6 seems more likely. Whatever is it, it’s expected to produce at least 200kW and 650Nm as to replace the current 4.5-litre twin-turbo V8 diesel.

Either or all of these engines could be matched to a hybrid setup. Toyota has already confirmed that all of its core models will be available with an electrified engine option by around 2025. If we were to guess, we’d suggest the 1GR V6 petrol might be linked to a hybrid system, as this engine is quite old now; electric assistance would no doubt reduce emissions and consumption to help it fit in with strict regulations in certain regions. 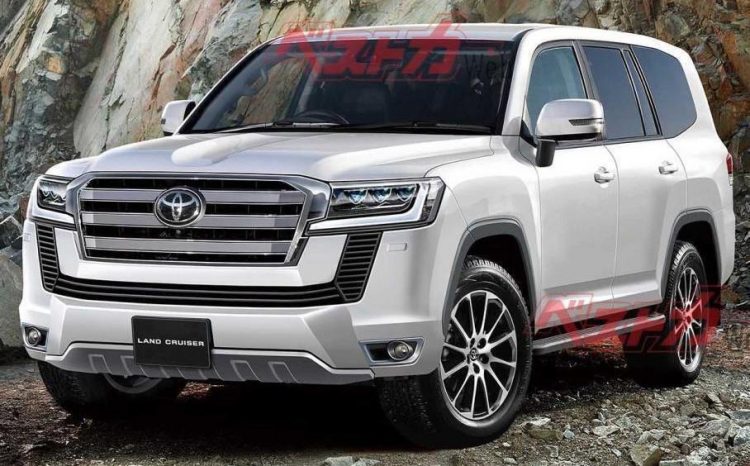 Slightly afield, we’ve done some further digging and it seems the next Lexus LX might not be entirely based on the 300 Series. Instead, we’ve heard it could switch to a monocoque-style platform to become a more luxurious proposition to help contend with the likes of the BMW X7 and Mercedes-Benz GLS. This could also explain why the LandCruiser is being discontinued in the USA this year.

If the Lexus becomes a slightly different model, the company might not see room for both the LandCruiser and LX in the US market, but only the LX. After all, Lexus literally stands for Luxury EXport to the US. Again though, no official details have been announced.

Even wilder in terms of rumours, the next LX could be topped by an LX 600 variant, featuring a 4.0-litre twin-turbo V8 that belts out 450kW or more – such an engine is in line for the rumoured LC F and LS F. That would be very interesting, and it would finally give Lexus an answer to all of the high-performance SUVs from Germany. There is a current trademark registered on the LX600 name in Australia and the USA. 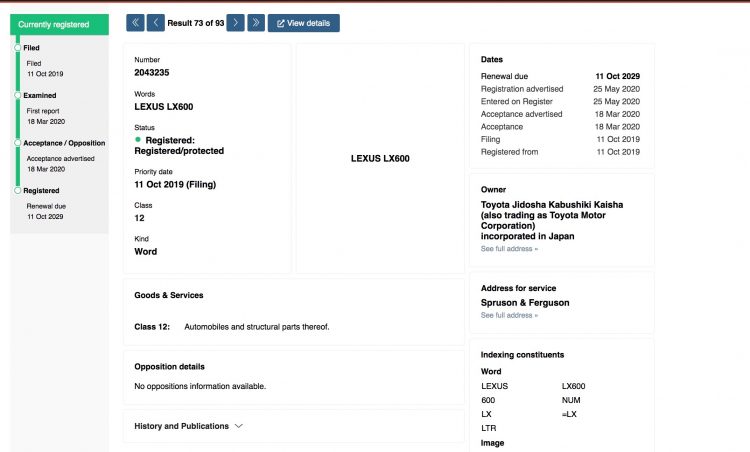 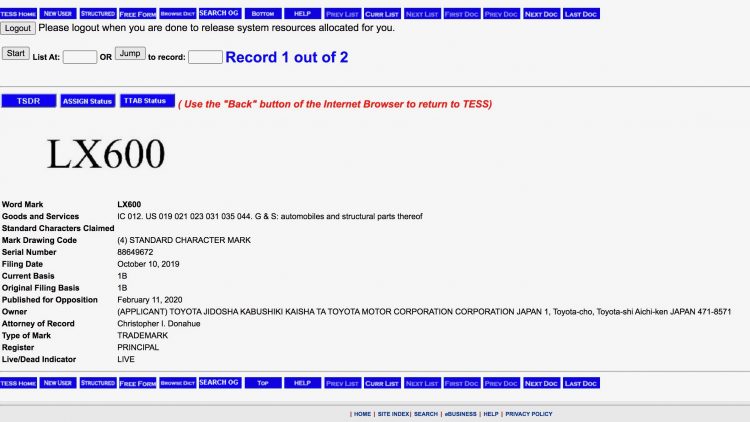 As we saw earlier this month, some images of an actual 300 Series model in Russia revealed the new interior. It incorporates a fresh wide touch-screen media interface, and a partially digital instrument cluster. The model also showcased plenty of physical buttons and controls, going against the current market trends.

It’s believed the 300 Series will debut in April. But since this dealer catalogue does seem legit, with engine codes and so on also popping up, the official reveal must be just around the corner.