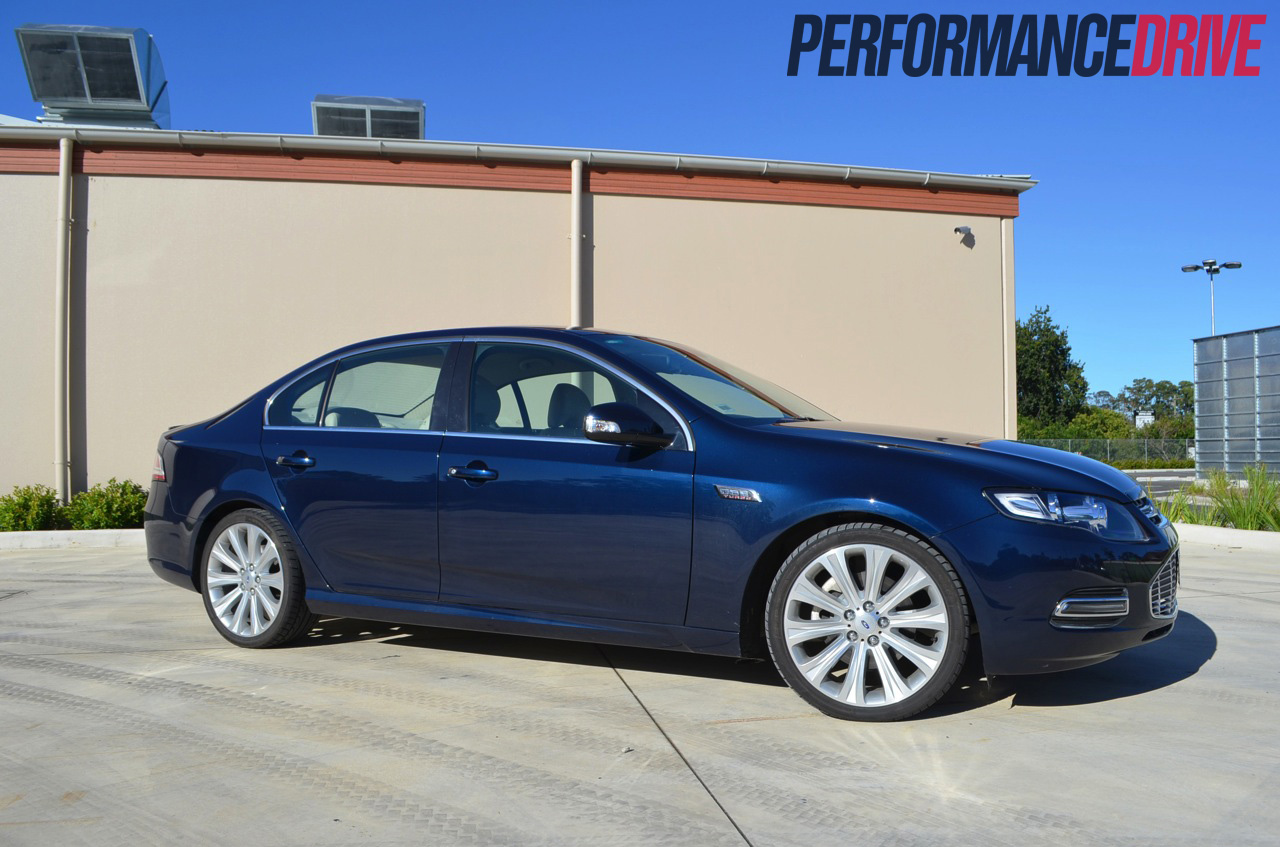 What we have here is the very impressive 2012 Ford Falcon G6E Turbo FG MKII. Think of it as an XR6 Turbo in a tux’ – it shares the same powertrain, but offers a more sophisticated in-car environment for those who like things more snazzy than sporty. 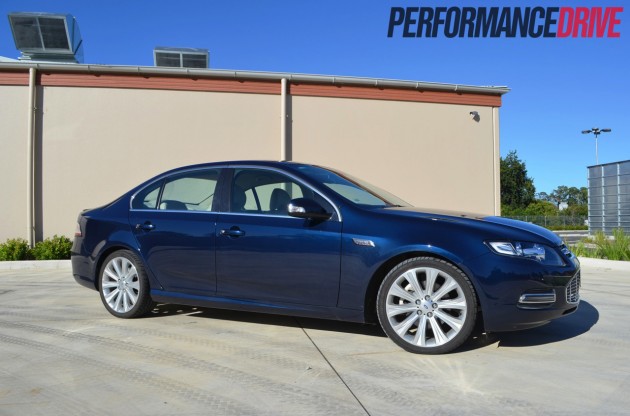 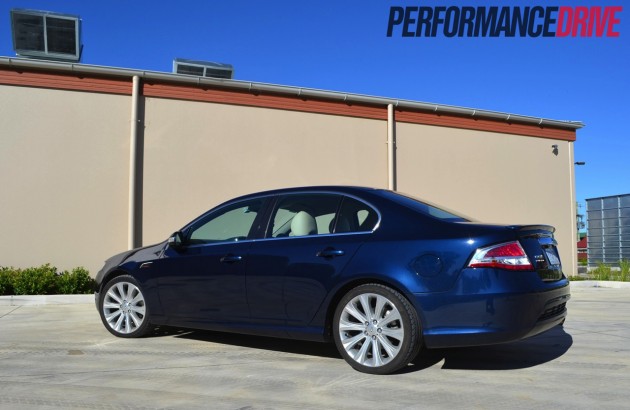 Up front, the 2012 G6E Turbo FG MKII receives the same 4.0-litre 270kW/535Nm turbo six-cylinder that you get in the FG XR6 Turbo. Power output is unchanged in the new MKII version.

The engine comes equipped with the highly regarded slick-shifting ZF six-speed auto. There’s no manual option given the G6E is more focused on luxury motoring than outright performance driving, that said, it’s no ‘hat on the back shelf’ Sunday driver either – this is a serious performance sedan. 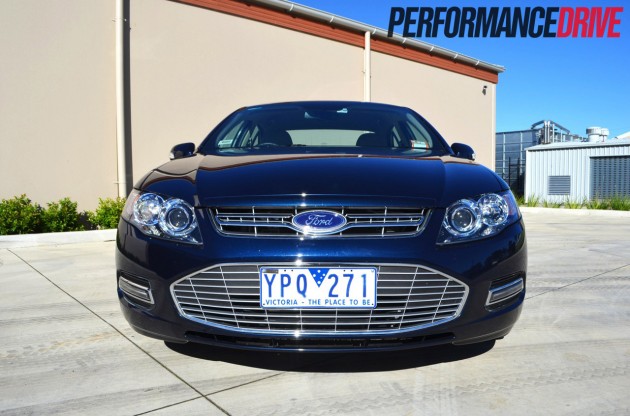 Sit inside the G6E Turbo and you’ll see it’s a complete Falcon affair; loads of passenger space in all corners and loads of luggage space. Look- and feel-wise, it’s the standout in its class in our opinion.

The no-cost option ‘Cashmere’ cream leather seats are comfortable to sit in, while all of the leather trimmings are soft and luxurious. If we had one complaint about this interior colour scheme it’s that it does tend to attract dirt and marks. Luckily, a dark grey ‘Shadow’ leather is also available if you prefer. (This test vehicle had almost 10,000kms on the clock and there were already dirty markings starting to form.) 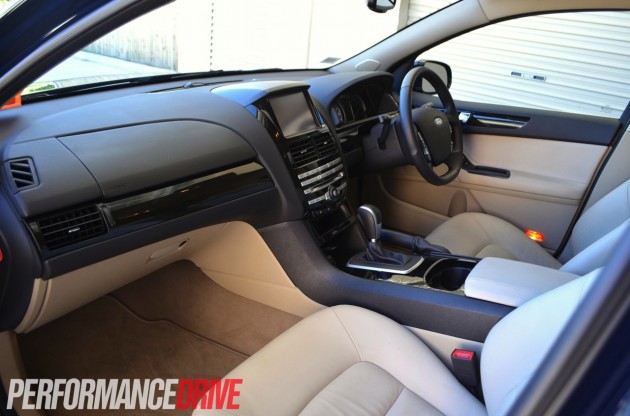 The dash layout is very handsome, with easy-to-navigate controls and dials. Sitting in the middle of the dash is the new-to-MKII eight-inch Interior Command Centre (ICC) LCD touch-screen multimedia interface, with integrated reverse-parking camera. The new interface replaces the old Human Machine Interface (HMI) screen. It’s head and shoulders ahead of the old system, and much clearer to read.

If you love your loud kicking music, the eight-speaker stereo is good for an ear bashing. Clarity is good for a well-priced luxury car, as is the bass levels. You can link up your iPhone and other MP3 devices, as well as USBs, aux-in, or use Bluetooth for both streaming music and connecting your phone for hands-free motoring. 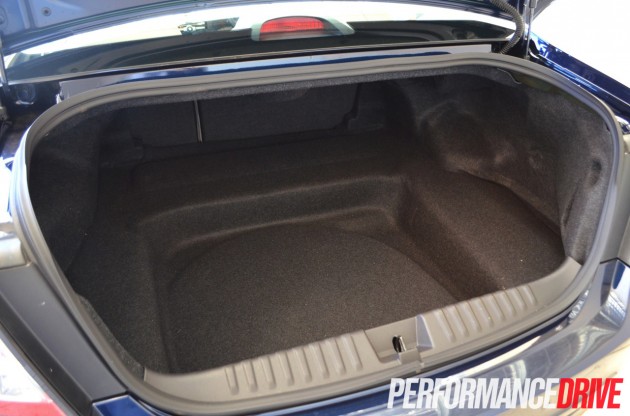 Like any large car boot space is generous, with up to 535 litres on board. This becomes even more handy when the 60/40 split rear seats are laid down to expose a portal; very handy for weekends away and carting long objects.

If you’re planning on using the car for towing, there’s an optional tow pack available for an extra $500 (1600kg max).

Be it in Winter White, Seduce metallic red, Vanish metallic blue, or Havana metallic yellow, the chrome highlights and stealthy theme give the G6E a sense of class and style. 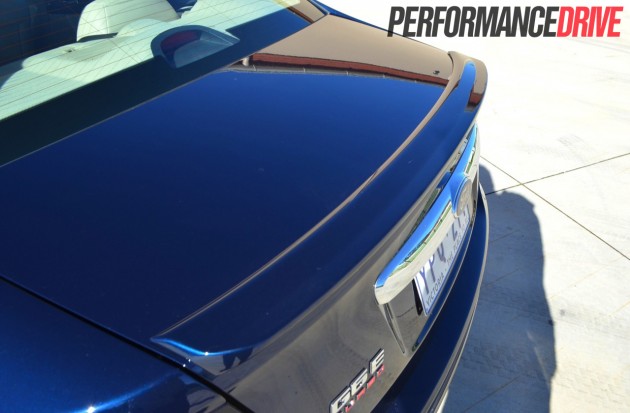 The 19-inch wheels, as well as subtle body additions like the boot lip spoiler and side skirts, and the new front air dam that looks more Aston Martin than Melbourne taxi, make it a true gem to look at.

The FG sedan has been awarded a five-star ANCAP safety rating. Up front you get driver and front passenger airbags, as well as belt reminders, side curtain airbags, and front seat side thorax airbags. Other standard safety equipment includes ABS, ESC, EBD, traction control, and brake assist.

Fire up the 4.0-litre six and you’d almost think it was a regular naturally aspirated version. Put it into gear and lean on the throttle though and you’ll quickly hear that’s not the case.

With every burst of acceleration you can hear that distinctive turbo sound as it spools up. It also makes a subtle turbo flutter when you back off. Under full acceleration, the engine roars like a lion with a stubbed toe, and whistles like a kettle that’s at boiling point.

On take off, the G6E doesn’t take much convincing to get up and move. There’s a hint of turbo lag when you first stomp on the throttle, but you are greeted with warp speed (or tyre smoke) once the boost kicks in. The six-speed self-shifter clicks gear after gear with a very cool turbo pop and burble from the exhaust between shifts. 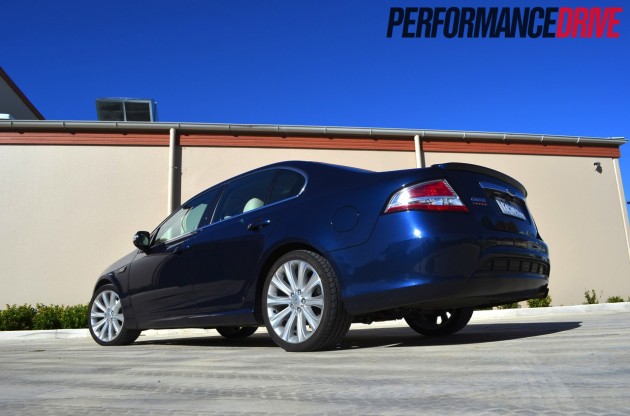 We timed a 0-100km/h time of 5.3 seconds, which is pretty fast when most of its competition would struggle to get below 6.5 seconds.

Pick any speed in any gear and kick down acceleration is nothing other than brutal. Other than waiting that spilt second for the boost to fill the engine, the big six fires up and moves along with great haste – often dialing up more speed than you want (goodbye licence?).

Fitted with Ford’s Luxury control blade rear and Luxury suspension at the front, the ride is forgiving on the heavy bumps but still firm enough to support some fun in and out of the corners. Ford says the spring rates for the G6E Turbo are slightly softer than what is featured on the XR6 Turbo. We found the setup to suffer a tad from bumpsteer, although, the upshot of this softer setup is the ride is very forgiving especially over jolting bumps. 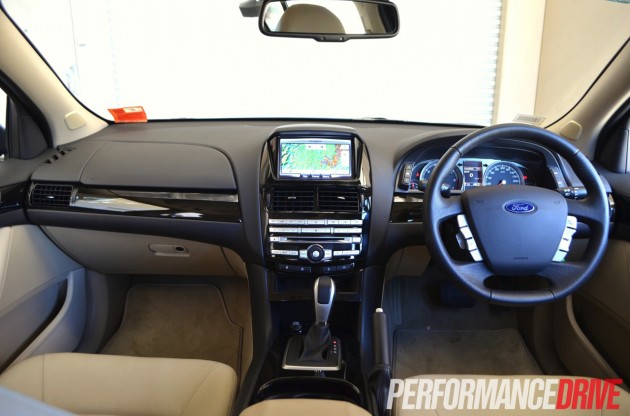 Steering the big 1745kg G6E ship can feel a bit disconnected at times while the steering is more on the light side, again, possibly due to the more luxury-inclined chassis setup. That said, the 19-inch wheels and low-profile tyres provide good response when it comes to changing direction.

Like most modern cars, the brakes are sufficiently up to the task, but we found some mild fading issues after we gave them a proper lashing, but that could be expected though given the G6E is not a dedicated sports machine.

Now here’s a fast affordable family sedan that sticks its middle finger up at the Germans. Sure, it doesn’t have as much gadgetry or an exotic V8 bi-turbo monster under the bonnet, and it doesn’t carry as much ‘golf club’ cachet as a Bismarck, but it doesn’t cost a million bucks, either.

And with so many tuners out there offering performance upgrades that could see this engine and transmission combination spit out huge numbers on the dyno, it’s no wonder it’s a favourite with those who like the whole ‘wolf in sheep’s clothing’ deal.

Inside is saturated with all the essentials, like sat nav, Bluetooth, and power everything. The leather is soft, and space is aplenty. It boosts 270kW onto the tarmac to bring up a blisteringly fast 0-100km time of 5.3 seconds. What’s not to love? For $56,235 it certainly gets a big green tick of approval from us. 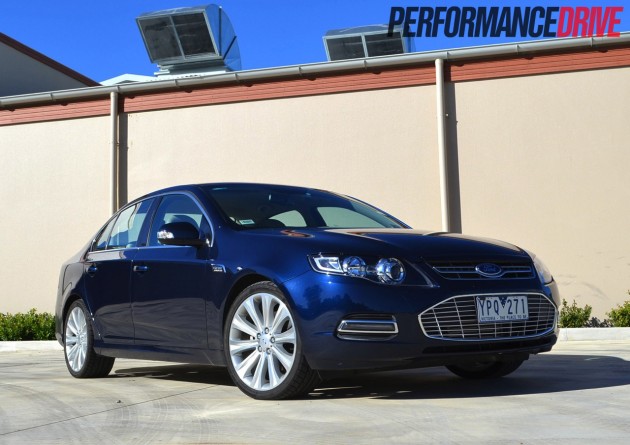