The ARK Performance Hyundai Veloster turbo has been completed and revealed in these first images. This is the Veloster turbo project previewed a few weeks ago, featuring a completely modified body, interior and engine. 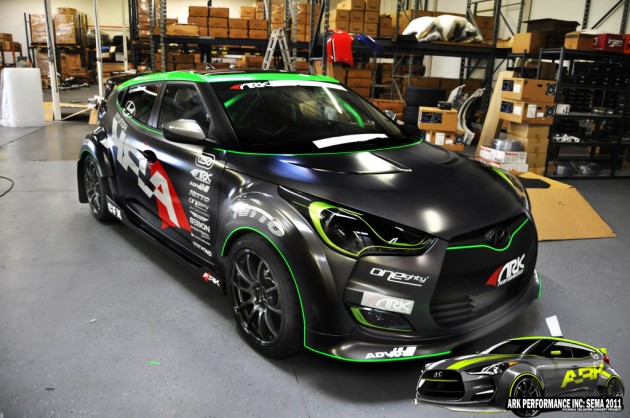 The project goes for an overall rally theme, offering heavily pumped guards front and rear, as well as a low and hunkered down stance thanks to new front and rear bumper bars and side skirts. The front bumper bar is sharp and low and extends around to form part of the wheel arches, while at the rear also features a race-like extension which blends in from the rear wheel arches.

Under the bonnet is where is the action is though. ARK Performance has fit a custom twin-scroll turbocharger kit with all custom piping and intercooler. ARK Performance says the package is good for around 157kW (210hp) – quite a boost from the standard Veloster’s 103kW.

Almost every other mechanical component has been swapped for a high-performance item in the ARK Performance Hyundai Veloster turbo. There’s six-piston brakes, a DTP coilover suspension kit which brings the Veloster down neatly over the Advan RZ wheels. The wheels are also wrapped in Nitto NT05 racing tyres.

ARK Performance has also fit its own custom camber arms and control arms for the suspension joints, as well as sway bars and an ARK GRIP full exhaust system for that rally car bark.

Hyundai and ARK Performance will debut the project at the 2011 SEMA Show next week. The show will run from November 1 to November 4. Stay tuned for plenty of coverage on some of the show’s standout cars.