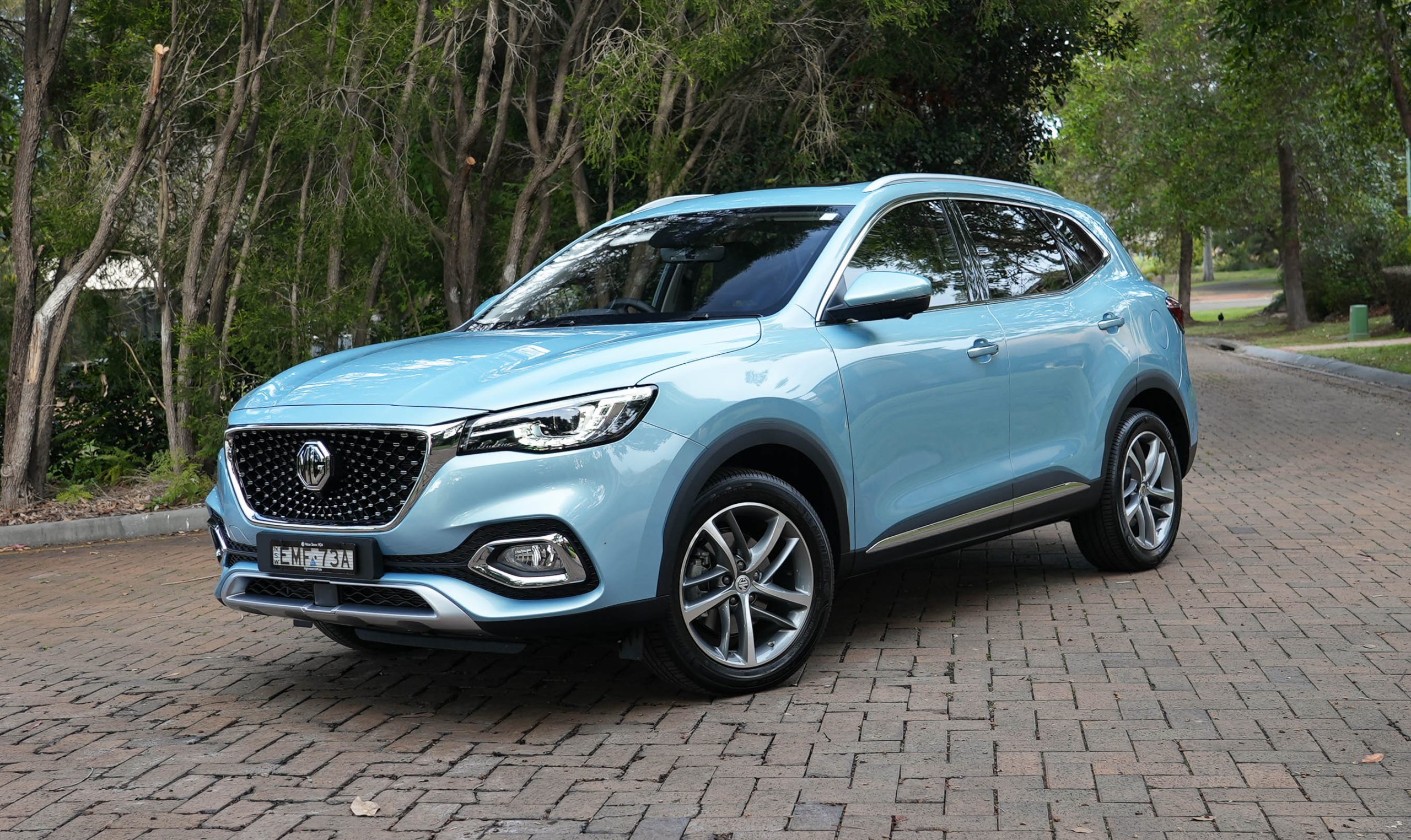 While plenty of the more established SUV makers in this space are running around trying to sort out their electrified plans for the future, MG has swooped in, pretty much straight away, with a proper plug-in hybrid version of its latest HS. 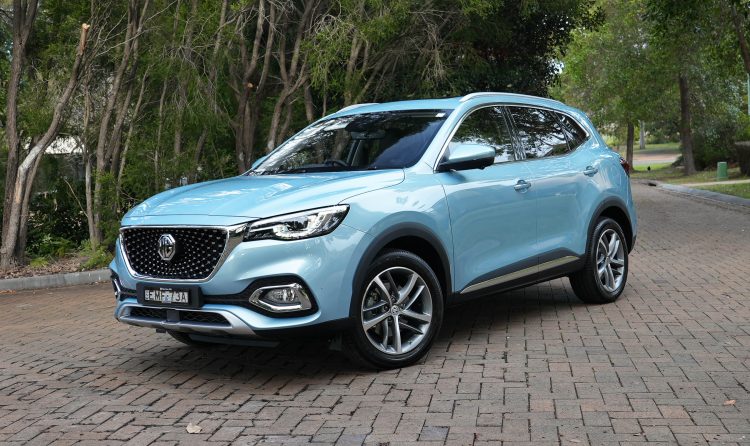 It’s one of only two plug-in hybrid options in this very competitive mid-size SUV market segment at the moment (in Australia), but obviously that will soon change – the other being the Mitsubishi Outlander PHEV. Even so, MG presents a very interesting proposition here.

Firstly, the PHEV variant sits atop the HS range in Australia, and comes in Essence trim level only. It is priced quite high, at $47,990. However, there is some respite in the fact MG offers this as a drive-away price deal. Buyers can also take comfort in the fact that the vehicle is covered by a seven-year, unlimited kilometre warranty. 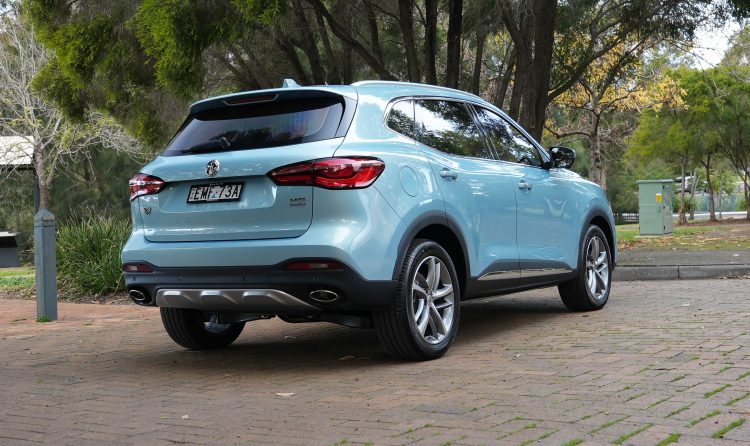 The hybrid model looks pretty much exactly the same as the regular HS, aside from a badge on the back and the inclusion of a charge plug cap on the driver’s side (fuel filler cap is on the other side). What we’re getting at is this doesn’t immediately stand out as some eco-focused, weird and wacky green machine.

MG’s design team has obviously taken plenty of classes in modern auto themes. The HS meshes in extremely well with the crowd, showcasing nice curves and defining trimmings, and the panel gaps and quality of the fixtures seem to be at the industry standards. As with the ZS small SUV, we think the wheels do sit inward from the body too much compared with most rivals, which can make it look odd (and cheap), in our opinion. 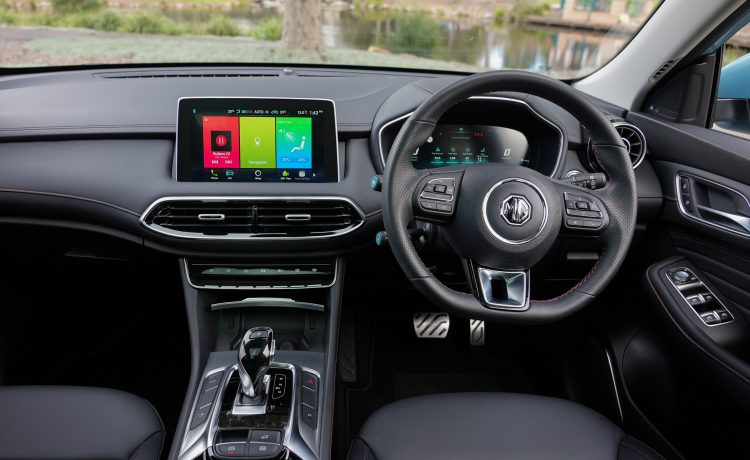 The interior is really well presented and looks surprisingly premium. In that sense, it’s good to see that initial outlay is justified, at least to some degree. There’s a big touch-screen (10.1-inch) on the dash and a fully digital gauge cluster (12.3-inch). However, the touch-screen is very laggy and some of the menu pathways are not very intuitive and/or crude.

A surround-view parking camera, big sunroof, satellite navigation, and two front and two rear USB charging ports are standard. For a near-$50k non-premium vehicle though, we’d expect something better than this basic six-speaker sound system. We’d also expect digital radio. Fortunately, Android Auto and Apple CarPlay are included, although the Bluetooth connection setup is a bit clunky and often forgets your phone (well, it did for us on numerous occasions). 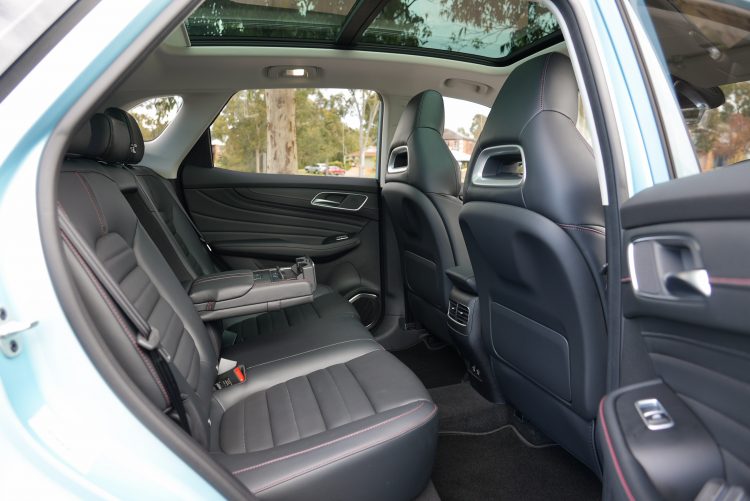 Check out these front seats. They not only look awesome – almost out of place for this style of car – but they’re quite comfy and supportive, too. The fixed headrest might be an issue for some; if you’re short the rest isn’t level with your head, but if you’re really tall you’ll overshoot the rest.

Rear seat space is very good for this class, with climate vents and those charging ports providing excellent long-distance accommodation. Most surfaces are covered in decent-quality materials, and the general sense of airiness and freedom to move is great. Visibility is also good, helping to reduce the chances of car sickness and claustrophobia, particularly among the young ones.

Boot space puts some competitors under pressure. Especially for a hybrid. It measures in at 451 litres, or 1275L with the rear seats folded flat. You won’t find extra storage under the floor though, or a spare wheel for that matter, which might annoy some buyers. There’s no 12 volt socket or pull-tabs for the rear seats, either, like what’s seen in some rivals. 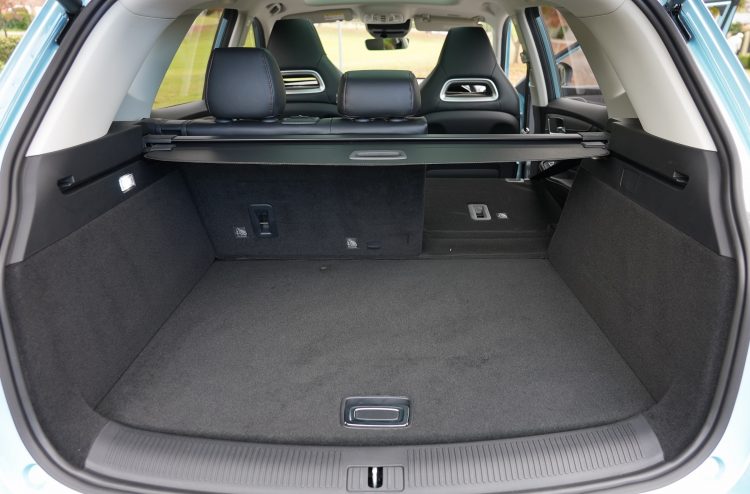 The hybrid model is front-wheel drive and features a multi-link rear suspension setup. Like other HS models. And like those, we find the ride comfort here to be a bit bouncy for Australian roads. At times, it can feel uneasy and almost unstable in certain conditions. There is a lot of body tilt, and under hard braking the platform tends to wobble excessively (for this class).

Braking performance is more than satisfactory, with our Vbox tests showing a 100-0km/h stop in 37.84 metres. That’s slightly shorter than average from what we’ve tested in this segment. It’s great to see MG has fit some decent Michelin tyres to ensure optimum grip, but with an electric motor providing instant torque, traction off the line can be challenging – if you’re a bit of a bogan, like us, it can be fun. 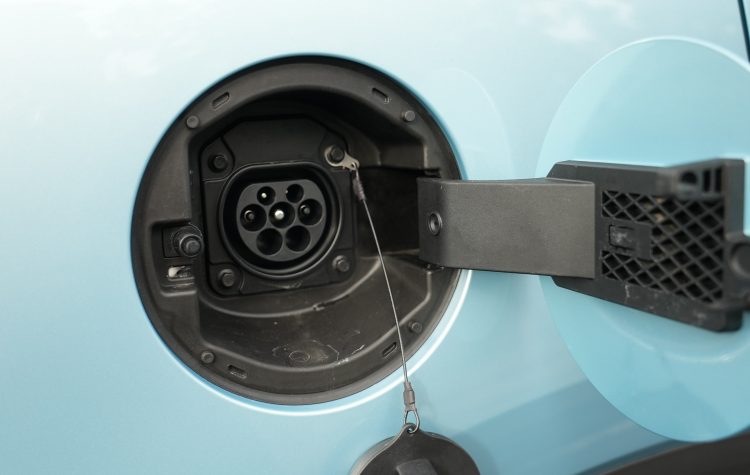 So, what’s involved under the bonnet? MG has paired its usual 1.5-litre turbo-petrol four-cylinder engine, producing 119kW and 250Nm, to an electric motor assist system. The electric motor supplies up to 90kW and 230Nm, and receives energy from a 16.6kWh battery pack. Combined, the system dishes out an impressive 189kW and 370Nm.

That makes it one of the most powerful vehicles in its class. In fact, as far as we can see, it is the second-most powerful SUV in the non-premium, mid-size SUV class in Australia right now. Toyota’s 225kW RAV4 Prime PHEV is not available here, and the 221kW Peugeot 3008 PHEV is yet to arrive. Hyundai’s 195kW Tucson PHEV and the Kia Sportage PHEV equivalent are also yet to arrive. 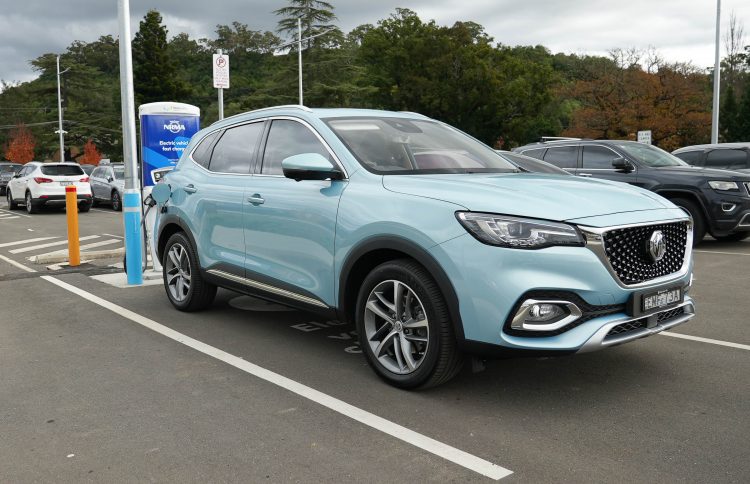 As we said at the start, it is impressive that MG has been able to bring its plug-in hybrid straight across to Australia, while all of those veteran rivals are still trying to figure out how to do it. The issue with those rivals is that the carmakers don’t see Australia as a high-demand market for electrified models. So they allocate such options where there is big demand. MG is still a relatively new brand since Chinese ownership, so we guess that does open up production flexibility, to some degree.

As a result of all that power, performance is in proper hot hatch territory. We clocked 0-100km/h in a best of 6.96 seconds. That’s basically exactly what MG claims, at 6.9 seconds. According to our performance results database this is the second-quickest-accelerating current-model SUV in this class that we have tested – behind the Ford Escape ST-Line (6.44). Well done, MG.

Despite being a modern hybrid, the powertrain is certified up to Euro 5 standard only; first introduced in 2009 and superseded in 2013. The average emissions output is 39g/km, which is excellent, and the official fuel consumption on the combined cycle is stamped at just 1.7L/100km. That’s all thanks to the full-electric driving capability, with an NEDC-rated range of 63km. 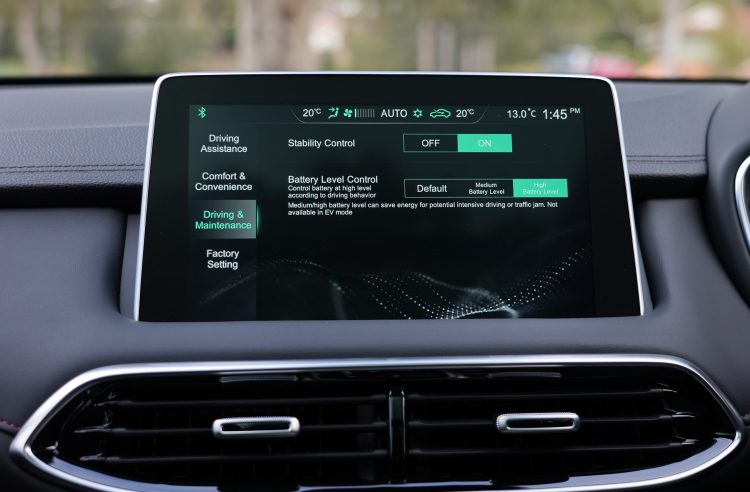 Charging (type 2 plug) takes around 5 hours using a 7kW system. There is a setting whereby you can save the current charge status, and we can confirm leaving it in this mode will provoke the petrol engine to try and recharge the battery to a high level. That is, without the plug. But we’re not sure how this could come in handy considering it uses more fuel in this mode.

Our experience returned an average overall consumption of 7.4L/100km. That included around 220km of driving, in mixed conditions and using the electric range. But that also included running our usual full-throttle performance tests. We think, after extended ownership in normal scenarios, you could expect to see a figure down around 5L/100km, or even less if you’re able to rely on the electric side for the majority of driving. 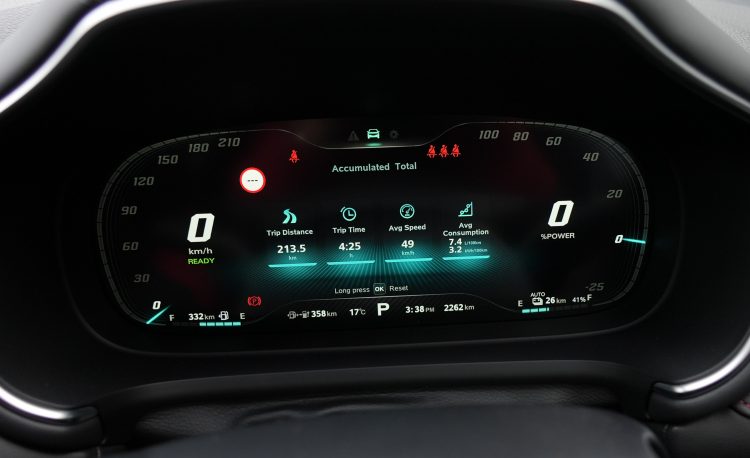 While this is clearly an impressive powertrain package for this class – and for MG to be already on the front foot in this area – we do have some reservations buying into such tech from a company that doesn’t have much experience in this field. The asking price of $48k also puts it nervously close to the well-established Toyota RAV4 Cruiser hybrid (from MLP$43,415 FWD, MLP$46,415 AWD).

Even though the Toyota is not a plug-in hybrid and the price doesn’t include on-road costs, if it were our money, especially at such close prices, we’d be going with the company that has over 20 years experience producing and selling hybrid vehicles over the one that doesn’t. If MG reduced the price here, then it’d be much more tempting. And that’s with factoring in some of the other shortcomings.