It’s been on sale for almost two years now, and although it does present some very appealing numbers, including power and performance figures, and price, it hasn’t really captured the Aussie market as much as we were all expecting. To remind everyone that it’s still simmering with fiery vivacity, Kia has launched a fitting Neon Orange colour option for the MY2020 range. 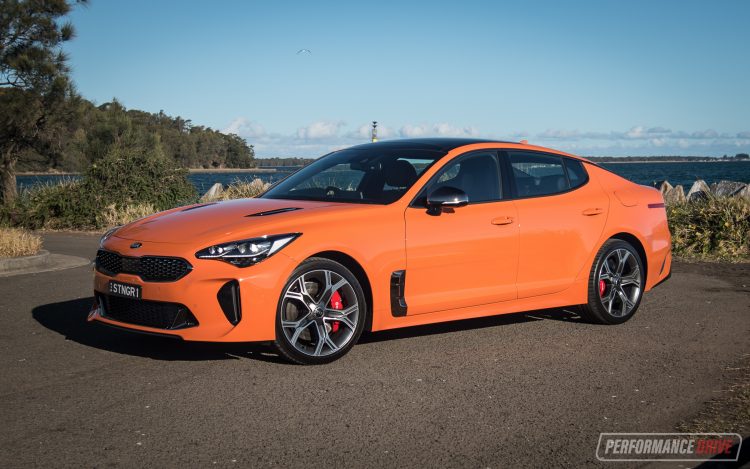 So far this year (through July) Kia Australia has sold 1094 Stingers, which is down 13 per cent on the sales effort during the same period last year. If it’s any consolation, demand for sedans is weakening in general, with the ‘large below $70k’ segment (same market as Holden Commodore and Skoda Superb) reporting a downturn of 31.5 per cent during the same period. In other words, it’s hard for any carmaker to get buyers back into sedans.

Let’s take a look at the flagship MY2020 GT variant to rediscover its attractions and flaws. Prices have jumped slightly from the initial launch, with the GT priced from $60,790, up from $59,990 of the MY18 version (excluding on-roads). Premium paint is an additional $695, and this test vehicle also showcases the bi-modal sports exhaust option which now costs an extra $3208.44 (up from $2298.18). 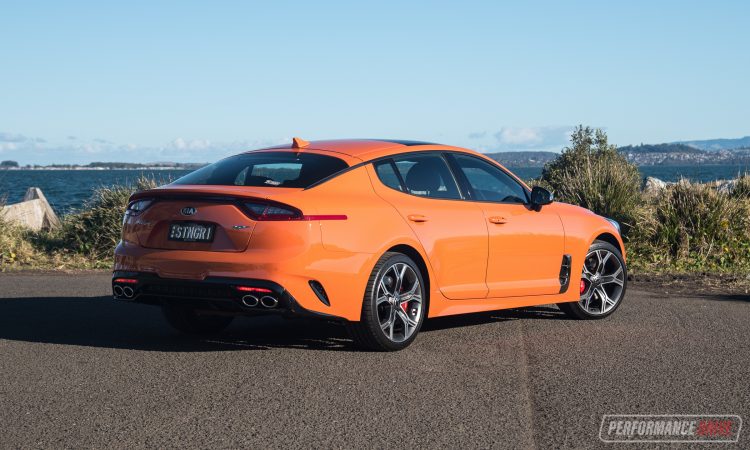 From the plush suede trim for the A-pillar and headliner, to the soft-touch material for the upper-half of the dash and door cards, to the metallic feel of the rotary knobs and buttons, the level of luxury and quality touches in here are substantial. Particularly considering this price point. It feels and looks like a genuine luxury vehicle, and the build quality and fit and finish put some of the premium Euro brands to shame.

Being a sports car the driving position and overall cabin layout is low and hunkered. The seats seem like they are mounted close to the ground, with only a small step up from the car’s floor. In that sense you do need to crouch down to get in and step right up to get out. It’s not as bad as a conventional sports car though because it is a four-door, with wide-opening doors. You’ll find the A-pillar isn’t as raked as a two-door coupe either, so there is some clearance for your head during entry and egress. 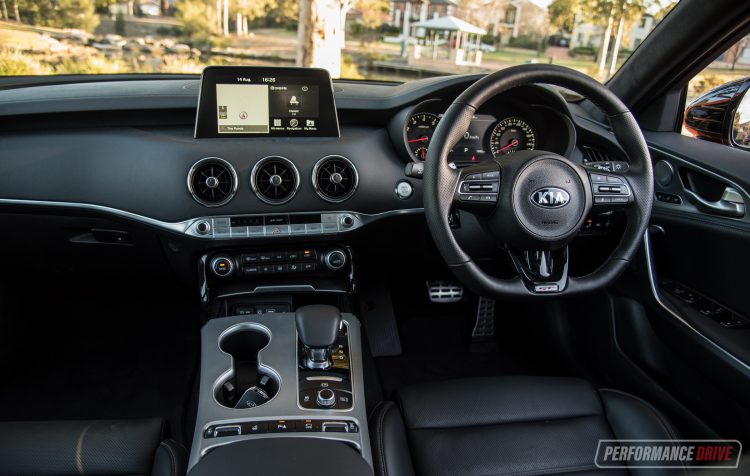 Accommodation and facilities are exceptional. It is a Kia, after all. And the GT comes with all the extra fruit. Dual-zone climate control with separate temperature control in the back, power front seats with memory for the driver, wireless phone charging, and a 7.0-inch digital screen for the instrument cluster packed with special sport displays (boost gauge, lap timer, g-force gauge) come as standard. The GT also adds Nappa leather for the seats, which is different to the non-premium leather featured in the 330Si (combination of genuine leather, polyurethane, and man-made materials).

Both the Si and GT come with an 8.0-inch touch-screen media interface, which provides full connectivity via Android Auto and Apple CarPlay as standard. Going for the GT, the screen also houses in-built sat-nav, a 360-degree parking camera, and sounds are sent through a 15-speaker Harman/Kardon sound system.

The front seats are very comfortable, with nice side bolsters to keep you stable in the corners. Engaging Sport mode sees these bolsters pump out and grasp you in further, automatically. You can adjust them at the touch of a button as well. If you’re doing a lot of long-distance touring, the cushioning is supple and forgiving for optimum relaxation, yet they are cradling enough to support sporty driving when the opportunity arises. 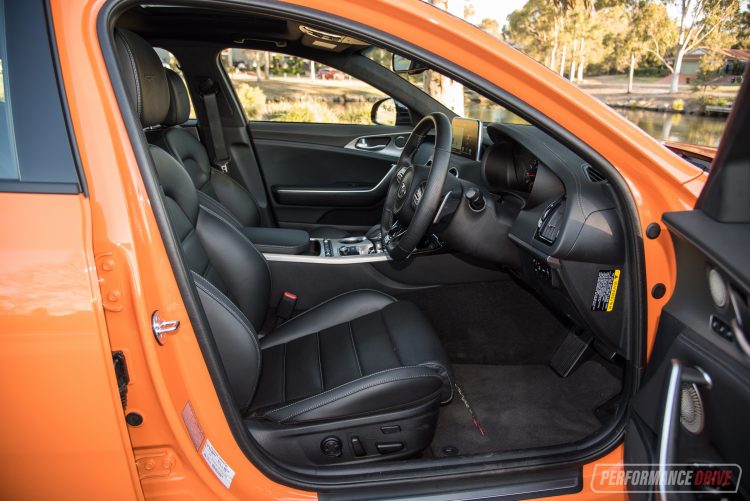 Seating space in the back is very respectable. Legroom in particular aligns well with the class standards, while headroom is slightly compromised due to the swooping roofline. There is plenty of clearance for average-height adults (or shorter), though. There’s also a flip-down centre armrest with cup holders, and climate vents to keep you cool or warm. A pair of charging ports is also available, including a 12V socket and a USB slot.

The Stinger is classed as a fastback, which is basically a four-door coupe. Despite this, it is categorised as a large sedan according to the Federal Chamber of Automotive Industries in Australia. But it does separate itself from a convention sedan by featuring a practical hatch lid at the back, whereby the rear windscreen lifts up with the boot lid. It means you don’t have to reach down and in to access the full capacity of the boot. You can also fold down the rear seats, expanding volume from 406 litres to 1114L. 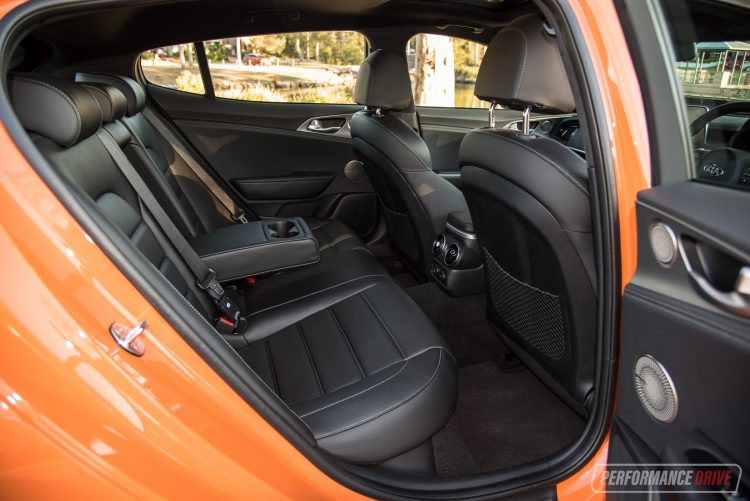 This is a vehicle that provides two characters; on one hand it’s a great grand touring luxury car, while on the other it is a savagely-fast sports sedan. We maintain our original view in that it is more inclined to the luxury side as opposed to outright sportiness. Think of it as like a modern (a lot more modern) version of the old Holden Calais V8 and Ford Fairmont Ghia, for those of you over the age of 30. Let’s take a closer look.

Power comes from a Hyundai-Kia-developed 3.3-litre twin-turbo V6 that produces 272kW at 6000rpm, and a strong 510Nm between 1300-4500rpm. These are some impressive numbers by today’s standards, especially for this class. In fact, no other vehicle in this specific class is able to surpass these numbers. So, right away the Stinger GT is the highest-performance vehicle available in this space. All of that power is sent through a Hyundai-Kia-developed eight-speed auto and into a rear-wheel drive system via a mechanical limited-slip differential.

During normal day-to-day conditions the Stinger GT will very happily and pleasantly stroll around.  The transmission is calibrated to offer smooth shifts, and its ratios are spaced to provide great highway cruising. In the default Comfort driving mode the adaptive dampers are also relaxed and absorbent, soaking up road imperfections, including our poor country roads, with very little negative after-shock coming back into the cabin. There is some minor body roll in this mode, which is to be expected given its comfort focus. 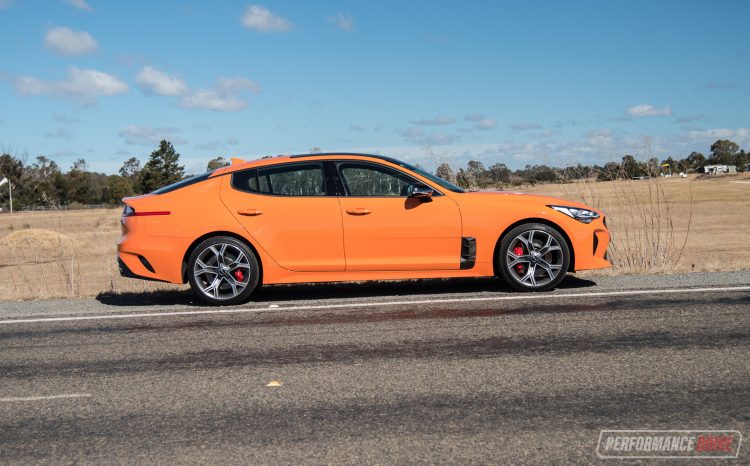 Switch it over to the Sport mode and you’ll notice everything becomes more lively and excited. The transmission is eager to shift down gears more frequently, often holding gears for longer and withholding upshifts. In this mode the car feels very quick and punchy, too. The throttle is more sensitive so you only need to lightly press the pedal to provoke a grin-inducing response. We think the first three gears aren’t as short as you might experience in more focused sports cars, but the engine’s ample output is substantial enough to pull you up to speed without hesitation.

In Sport mode the dampers become very taut. In our opinion, this is where consistency becomes a little blurred. During Comfort driving the Stinger GT is a quick luxury tourer. But in Sport mode it seems like the bound setting for the dampers is simply turned up to very high levels, while the coil springs remain at their comfort-suiting rates. What you’re left with is a highly-tensioned ride across the smaller bumpers, such as bridge connections and so on, but push it further and you do experience some of the underlying flex and body roll. It’s almost floppy, but only at the higher end of driving aggression. Fortunately, the limited-slip diff does well to pivot the car around corners and improve agility.

We think there could be more work done on the spring and damper combination for this specific driving style. In that respect, it becomes clear the twin-personality of the car is more skewed toward luxury. Another area that seems to resonate this is the transmission. While it does a commendable job in regular conditions, there is no specific manual mode. You can use the paddle shifters to ask the transmission to change gear when you want it to, but if it has other plans it will take over. We also experienced some transmission overheating during our test, and we weren’t doing anything out of the ordinary compared with any other vehicle we test. This is a bit disappointing in our opinion, especially if it wants to be regarded as a serious sports sedan. 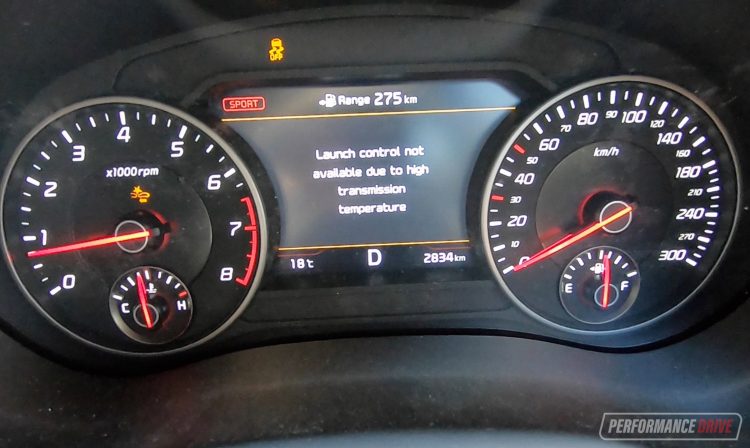 All of this is fine if it wants to be regarded as a luxury car, first and foremost. Take it as a bonus that it’s also one that happens to be very powerful and fast. Speaking of speed, we clocked a best 0-100km/h in just 4.84 seconds. This is the first time we’ve been able to dip into the 4.0-second zone with the 3.3 Stinger, following three previous tests that we’ve done in different MY18 models – Stinger GT without sports exhaust option: 5.28 seconds, Stinger 330Si with sports exhaust: 5.64 seconds (summer test), and then again a different 330Si with the sports exhaust option: 5.18 seconds (autumn test).

We think we were able to find a quicker result this time because the conditions were cold and we tested with a half-tank of fuel – usually we test at near-full because it’s easier to maintain consistency. Why didn’t we test with a full tank, then? Basically we wanted to see if Kia’s claim of 4.9 seconds was ever possible in real-world conditions. Now we can officially confirm a standard Stinger GT, albeit with the optional sports exhaust, is part of the four-second club. Another possible explanation is that Kia has since moved to Michelin Pilot Sport tyres, replacing the original Continental ContiSportContact 5P items that were fitted to all previous models we tested.

As for fuel consumption, we averaged 10.2L/100km during our test, matching the official rating. This is a pretty good score considering the performance that’s available. And keep in mind it isn’t a featherweight, with a tare mass of 1780kg. There’s also no CVT automatic or dual-clutch automatic. These are common measures applied by manufacturers to quick-fix fuel consumption levels.

The Stinger remains as a brilliant product for the brand, and for customers looking for a sports sedan. It is a shrinking market space, yes, but without the Stinger there really is only the pricey European options to turn to. In fact, you won’t find anything else on the market in this price range that presents this level of rear-wheel drive performance.

We love the power and performance of the 3.3 V6 engine, and Kia’s outstanding cabin practicality and packaging. The industry-leading seven-year warranty should also be taken very seriously, particularly if you’re an avid driving enthusiast and like to enjoy the upper levels of performance on a regular basis. Our only concerns are the transmission, as it doesn’t seem to match the tempo of the punchy V6, and the ride is very rigid in Sport mode.

CONS:
– Transmission lacks sharpness, and no manual mode
– Suspension bound is very rigid in Sport mode, doesn’t fix point below
– Chassis has underlying floppiness; great for luxury/comfort but not so much for outright sportiness