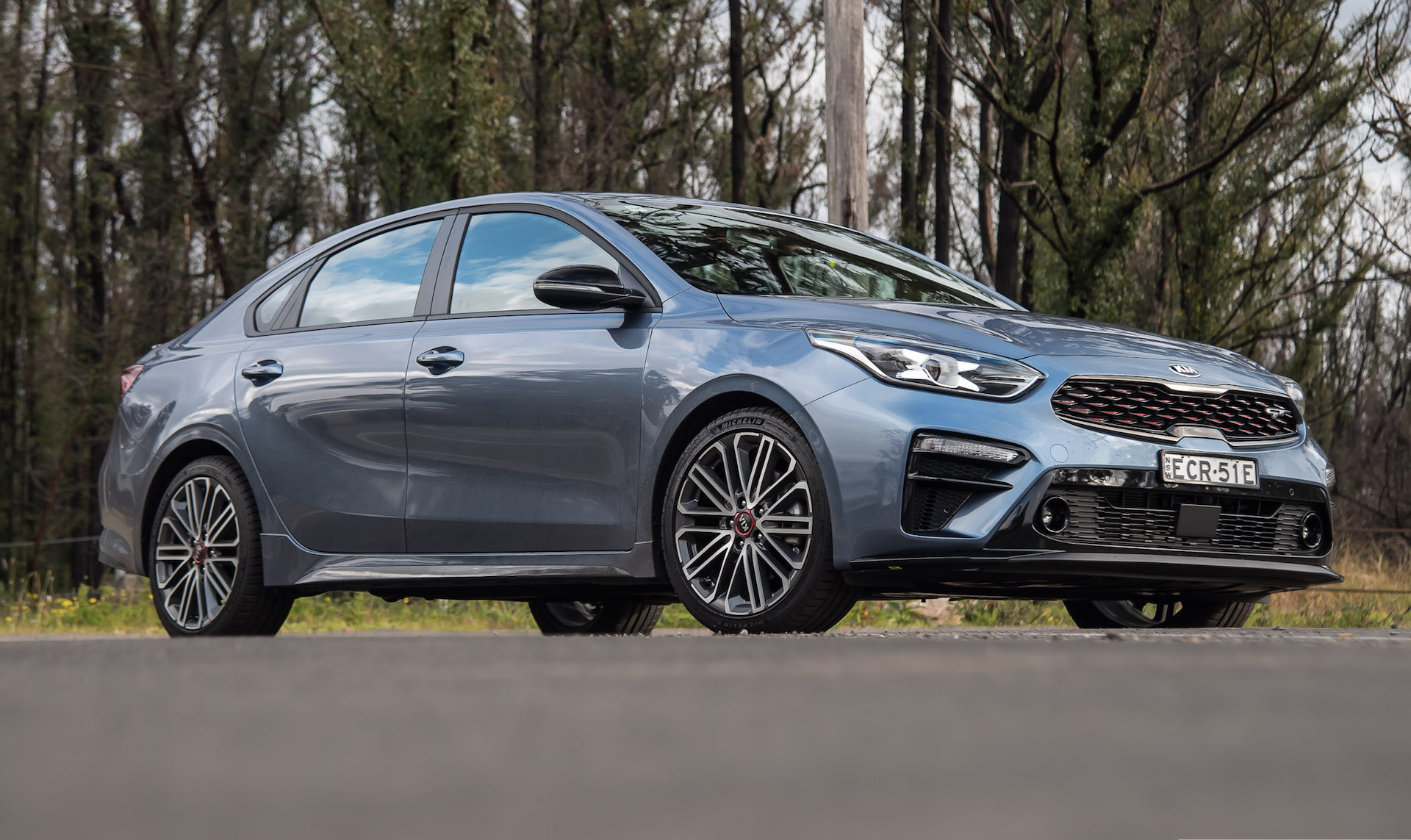 As the name suggests, PerformanceDrive loves to get its teeth stuck into all sorts of sport-oriented vehicles. Although the 2020 Kia Cerato GT falls short of the full Hyundai i30 N equivalent hot hatch, we think there is a huge amount of appeal to be found here. 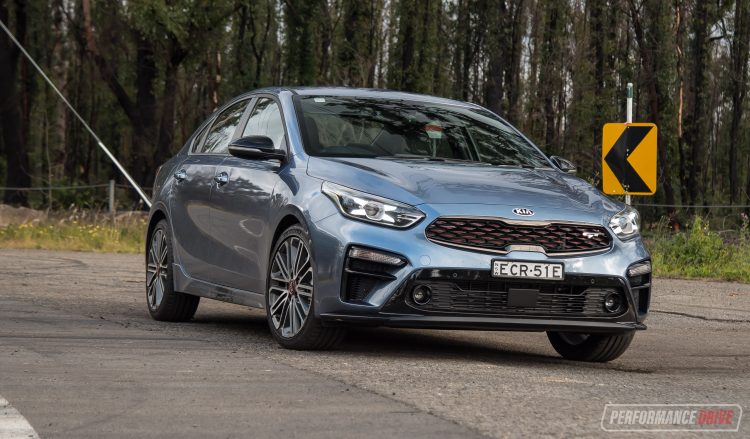 The Cerato is one of the many models to turn the South Korean carmaker into a success story in the last few years. Kias and the Cerato have some of the most contemporary designs, the longest feature lists and still the best warranty in Australia.

All models but the GT get by with a naturally aspirated 2.0-litre, four-cylinder petrol engine that produces 112kW and 192Nm. The GT speaks more to our desires with a zippy 1.6-litre turbo petrol four-cylinder that produces 150kW and 265Nm. Sadly, there are no manual transmissions to be seen above the Sport model, but the GT is exclusively paired with a seven-speed dual-clutch auto gearbox. 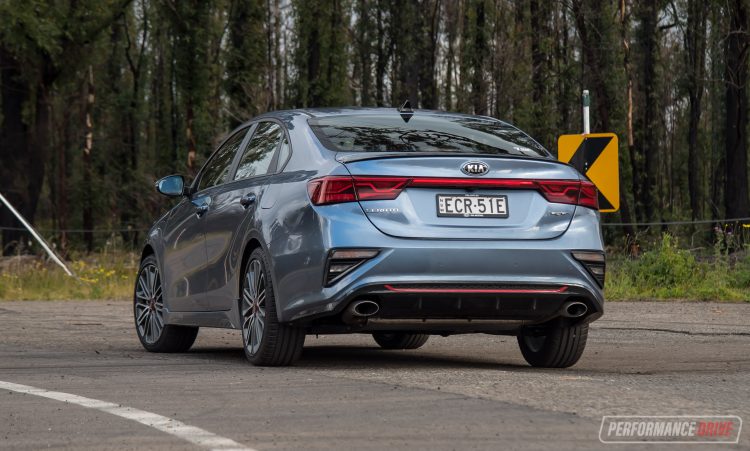 One of the bragging rights for the Cerato GT is in the amount of features you get for the price. It’s always important to check through the model range to see what additional features you get on top of the lower models, as the lower spec models might serve your needs too. For example, all Ceratos receive autonomous emergency braking with forward collision warning, lane keeping assist, front and rear parking sensors, and an 8.0-inch touch-screen with Android Auto, Apple CarPlay, and digital radio. If those features are all you want, and you’re not fussed on engines with a bit of oomph, then the base S may suffice. 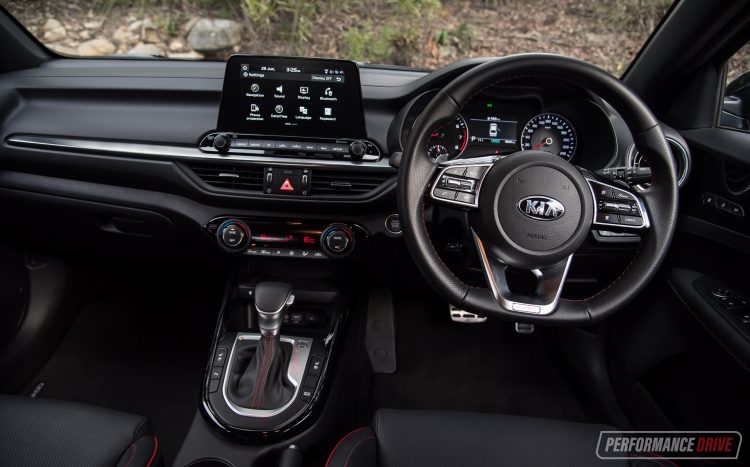 All Kia models from 2017 onwards look more contemporary than their price tag suggests, likely thanks to ex-Volkswagen and Audi chief designer, Peter Schreyer, moving over to Kia in recent years. Even though the Cerato shares the same platform as the Hyundai i30, they look very different.

The Cerato sedan looks a little more conservative than the hatch. At the rear, it goes with neat angles, horizontal lines and joined taillights that help it look wider than it is. We love the fresh-looking gloss black areas and subtle body skirts. But its flair doesn’t go so far to ruin a very respectable looking car fit for visits to your in-laws. 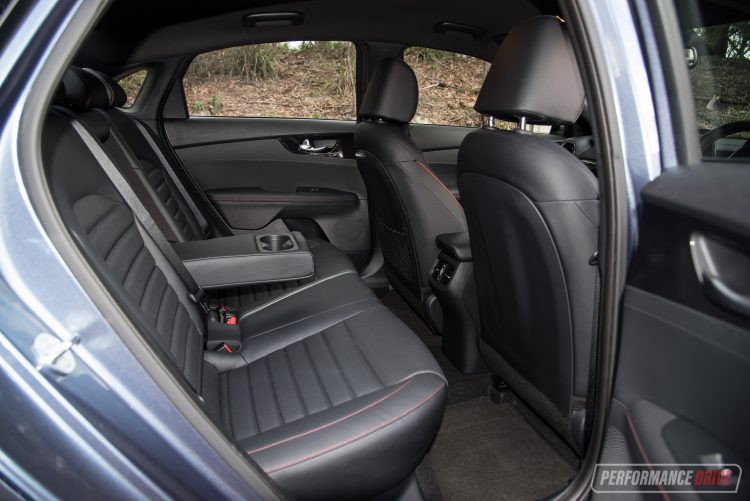 The GT’s interior design still conforms to the latest styles and trends even though it has been out for a number of years now. And it’s even more practical than most at this market level. Materials and the instrument panel look and feel premium in quality. Especially the soft-touch buttons. The dash is well laid out and super easy to navigate.

Kudos to Kia for providing a practical environment with plenty of storage holes, even though the GT is all about sportiness as well. All too often sports-oriented cars can feel cramped and restricted. The centre storage bin in here is huge for a small car, and there’s a nifty two-tier shelf above the gear stick, and the cup holders in the centre console and doors are big enough to fit a 1-litre bottle. 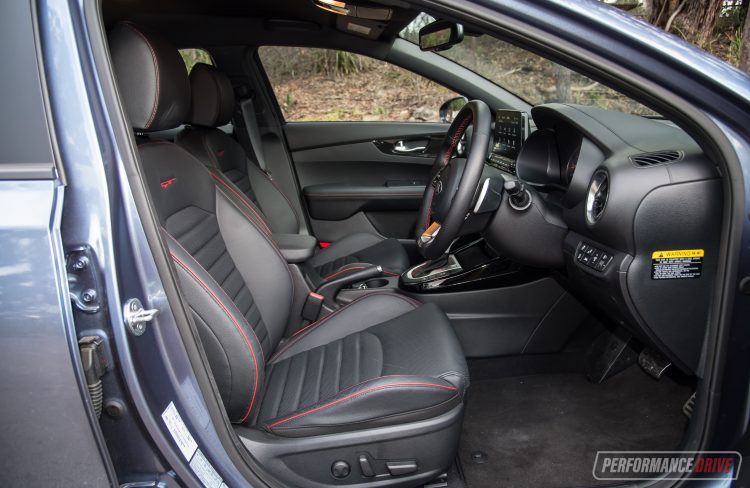 If comfort is more important than being fastened when you’re whizzing around corners, the GT’s sports seats lean more towards the latter. They are heavily bolstered on the sides like bucket seats, so you feel secured in tightly. No issues from us, but they might pose an annoyance to bigger-framed people. There are also no complaints with space in the front and rear seats. In fact, space is very commendable for this class.

In the boot, the sedan is officially bigger than the hatch. At 502 litres versus 428 litres, you will fit lots of groceries in there. Obviously, the hatch has larger opening access than the sedan, but both rear seats fold down 60:40 for transporting longer items. Comparing to the rest of the market, the Corolla sedan measures smaller at 470 litres, and the Mazda3 sedan is smaller again, at 444 litres. The Cerato GT uses a space-saver spare wheel like the Corolla and Mazda3. 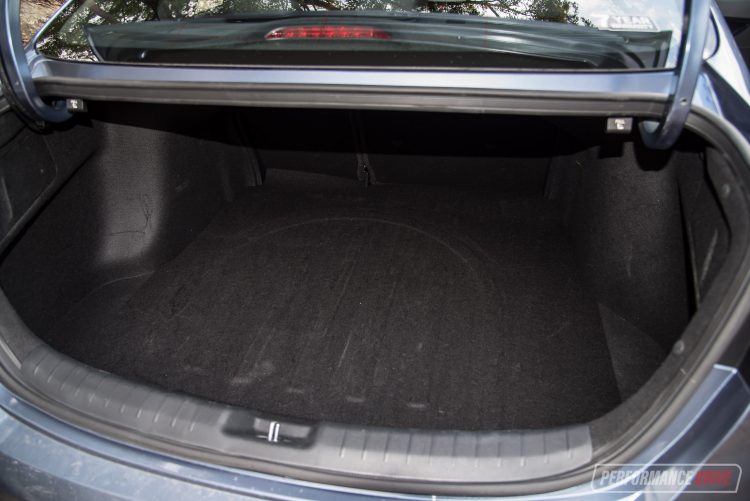 Having driven the 2.0-litre naturally aspirated engine offered in the first three variants (review here), the two engines are worlds apart in performance and character. The GT turbo engine significantly incentivises the higher price tag. It feels more willing and livelier. You can feel the quicker pick up at low revs, and unlike the standard engine, the GT feels happy to be revved up and played with higher in the rev range. With this, it’s easy to mistake it for a hot hatch. Our testing revealed a dashing 0-100km/h time of 6.73 seconds – bettering our 6.95-second effort we previously achieved in the GT hatch.

That dual-clutch auto also helps to make it notably quicker to zoom about. It takes a little getting used to as there is a slight delay on take-off when accelerating gingerly, compared to the conventional auto gearbox. But when driving with a heavy foot, the transmission suddenly snaps to the job and punches through the gears quicker than the conventional auto. 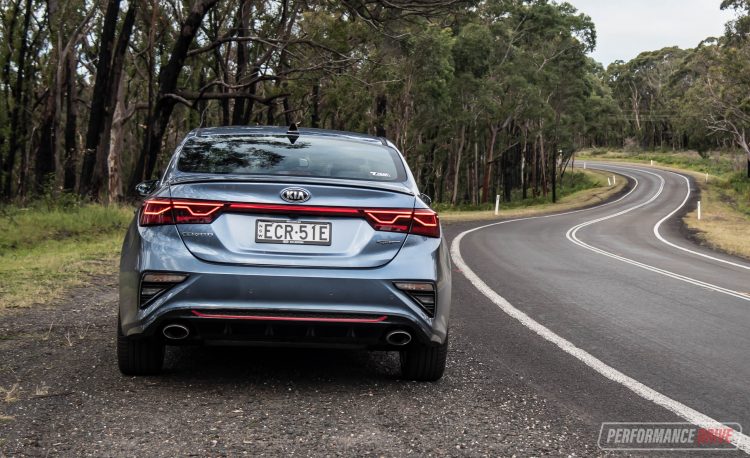 The GT outputs a sneaky, artificial engine sound through the sound system inside. We feel that it is a little disingenuous, especially when it cannot be turned off. The engine sounds athletic enough on its own and from the exhaust outlet, so why bother with such a gimmick?

All that performance might have you think that you’ll pay the price at the petrol bowser – not true. Our average fuel consumption was 0.8L/100km better than what we saw in the base model Ceratos. We burned 6.9L/100km, similar to the official 6.8L/100km average. The naturally aspirated engine burns 7.4L/100km, officially. One positive about the GT not being a full hot hatch/sedan is that it runs on the lowest 91 RON fuel in Australia, and is compatible with ethanol E10 blend. 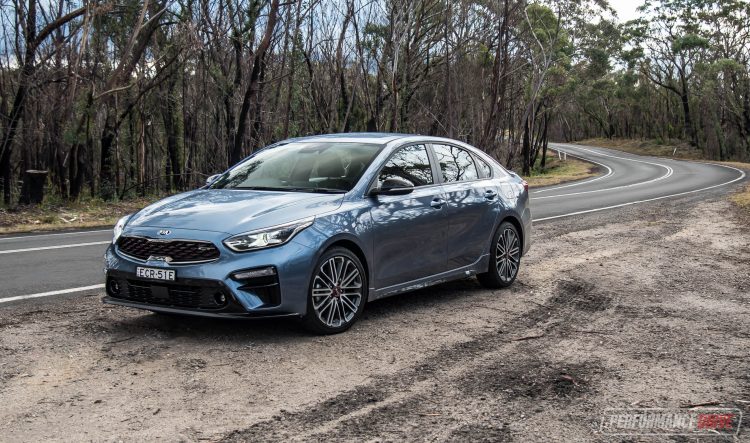 Like with most Kias in Australia, the GT has a locally engineered and tested suspension setup. They’ve come up with a tensioned ride for a small sporty sedan. The mix between comfort and stiffness is about on par with this style of vehicle we think. It absorbs pot holes without too much bother but it also prevents body roll during dynamic driving. Because of the stiffer setting, you will notice smaller bumps more than in the lower-spec variants.

There’s a huge amount of grip from the Michelin Pilot Sport 4 tyres. You can really push it and the car remains flat and neutral. The steering is tuned to feel slightly weightier in the GT to give a sturdier character when driven hard. But it lightens to a comfortable level at carpark speed for easy manoeuvrability.

The Kia Cerato GT is one of our favourite small cars – in sedan or hatch shape. It is competitively priced compared to the rest of the market, yet still loaded with features and safety tech. Not to mention that well-proportioned design. It is also one of the few that bothers to offer a brilliant little engine for those who don’t want to comply with breathless, naturally aspirated, or de-tuned engines. And there’s no CVT auto, which is great.

If that is not enough to convince you to add it to your test drive list, Kia still has the best warranty in Australia, with seven years and unlimited kilometres. Servicing intervals are required every 10,000km or 12 months.

CONS:
– Artificial engine sound inside, cannot be turned off
– GT is as high as the Cerato goes; where’s the Hyundai N equivalent?
– Space-saver spare wheel