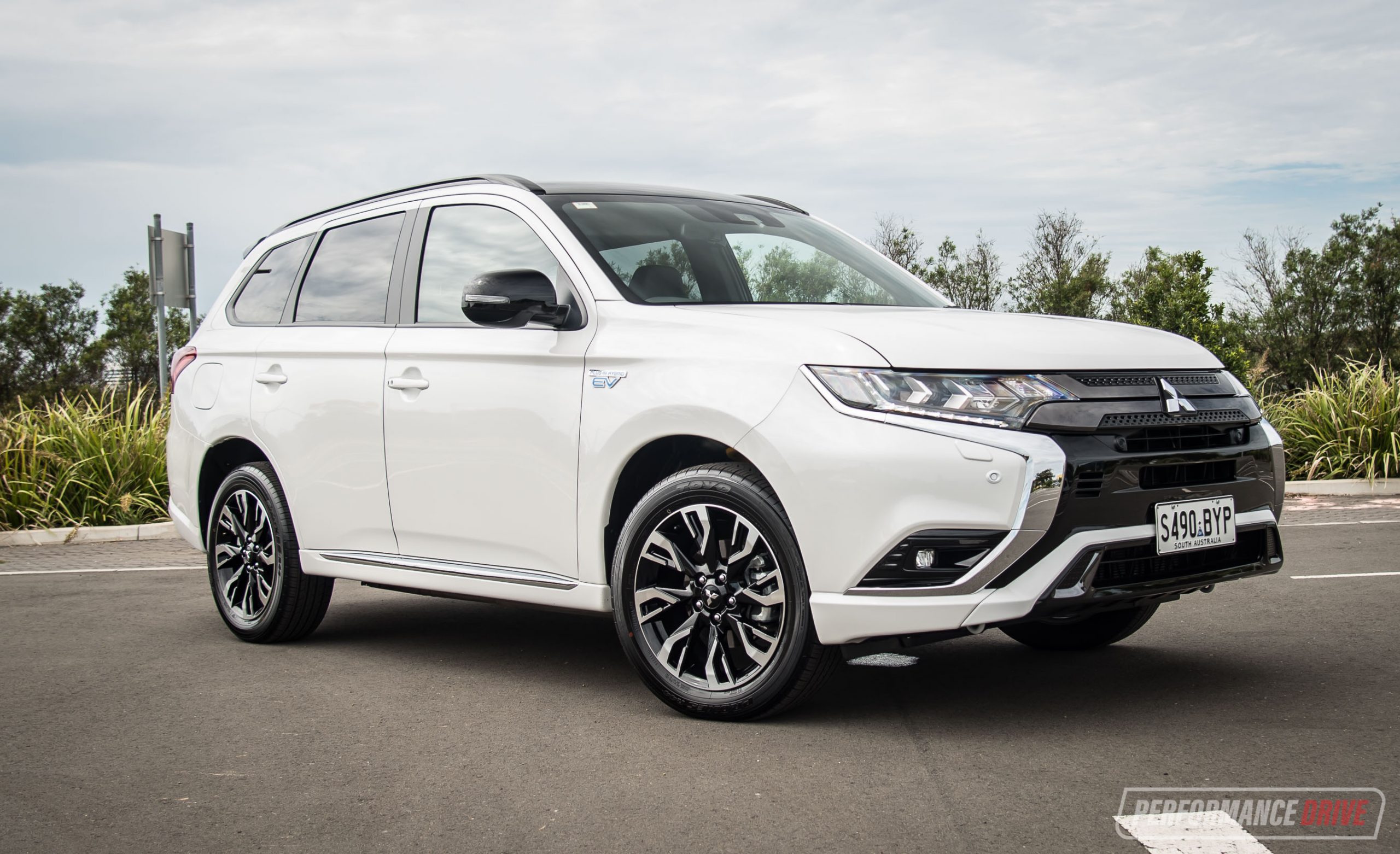 Fuel-saving technologies are finally on the rise in Australia. Hybrid vehicle sales increased by 94 percent from 2019 to 2020. But the increase is modest for plug-in hybrid vehicles (PHEVs), with just an 18 per cent increase over the same period. Mitsubishi took this bolder approach to being environmentally friendly back in 2013, pairing its popular mid-sized SUV – the Outlander – with PHEV technology instead of just a plain hybrid. 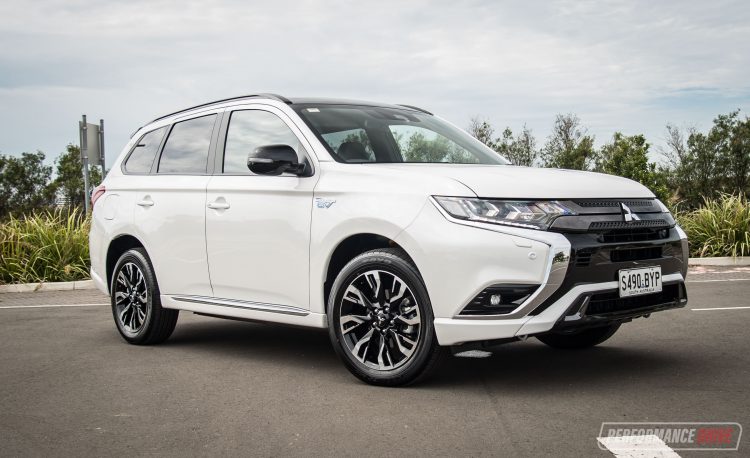 The Outlander has done a lot for the Japanese manufacturer over the years, seeing it enjoy strong sales from what is now quite an old model. Yes, it has had many mid-life facelifts and spruiking, with new features added along the way. But this current third-generation Outlander landed in Australia way back at the end of 2012. The brand new fourth-gen model, sharing Nissan X-Trail underpinnings, is due out by the end of 2021.

In the meantime, we thought you might like to learn more about the current Outlander PHEV before we say bon voyage. You can get it in three grades; the ES, GSR or the Exceed. We have the mid-spec GSR on test here, which retails for $52,490. Prices start at $47,990 for the ES PHEV. If PHEVs are not your thing, you can also pick up the base model Outlander from $29,990. (All prices exclude on-road costs.) 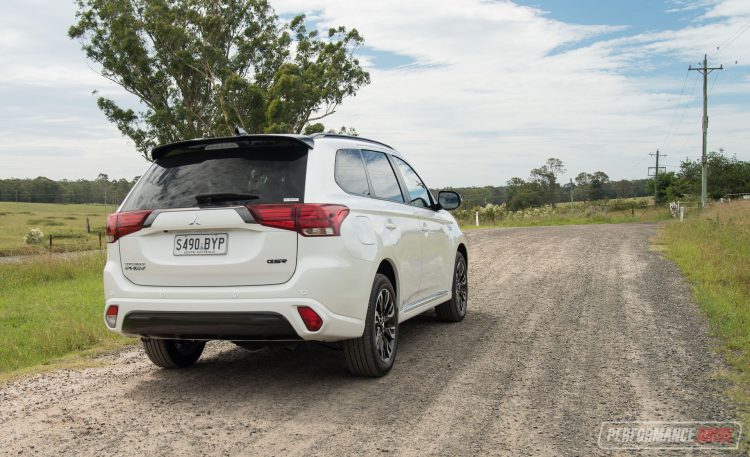 Looking beyond what is now quite an outdated overall shape, the 2021 Mitsubishi Outlander has had lots of cosmetic surgery to keep it looking fashionable. It heads the streets with the company’s ‘dynamic shield’ front facia, where a huge star-shaped glossy black grille embodies the headlights with lots of chrome edging. The stern-looking flat bonnet line still dominates the front end like it did in 2012. Not much has changed in the middle section and rear of the SUV except for some more glossy black areas and semi-LED taillamps. Bring on the next generation later this year.

There’s not a big deal of boasting to do about the interior, either. Plain, like a car from yesteryear. The dash layout is simple to use and quick to grasp, but it lacks style, elegance and innovation. Materials look and feel inferior compared with most of the competition. For example, the indicator stalks make a cheap plastic clanging sound when moving as if they are going to snap off, and a poignant plasticky smell that we remember from our last Outlander review has not changed. There is a newish 8.0-inch multimedia touch-screen with Android Auto and Apple CarPlay. It also incorporates a rear-view camera that is, frankly, of terrible quality at night. 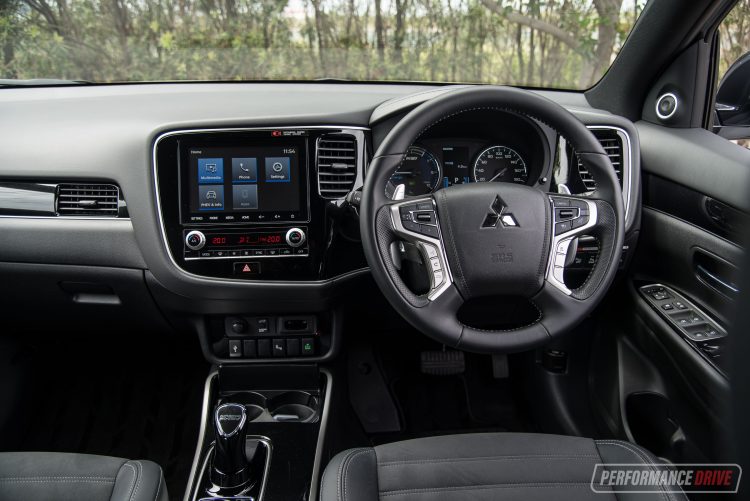 Although there is not a lot to get excited about on the inside, presentation-wise, it is pleasingly practical and easy to understand, with loads of storage spaces to fit your belongings. This might be more important to you than style, but we have seen that you can have it both ways these days. There is an adequate amount of leg and headroom in the front, with impressive legroom in the second row.

Boot space is slightly below average for this segment if you look at official figures. It fits 463 litres of volume and expands to 1602 litres if you fold the second row down. Official boot volumes are sometimes hard to compare as different measuring methods are used. We think the Outlander’s boot looks much deeper than most. Though, only a space saver spare tyre is offered. Some models that officially measure bigger are the Toyota RAV4, Honda CR-V and Subaru Forester. But few others offer a seven-seat option like the Outlander. 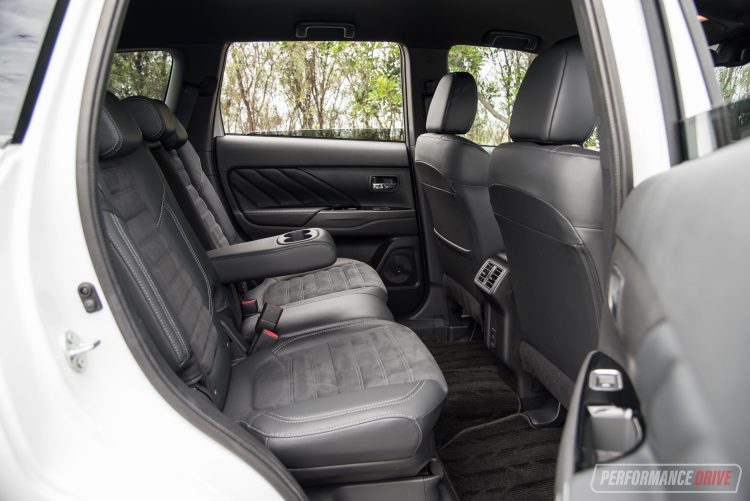 It misses out on speed sign recognition, a digital instrument cluster, wireless phone charger, rearward collision mitigation, and 360-degree view cameras. Many rivals now offer this as standard or at least on mid- to high-spec variants like this one. 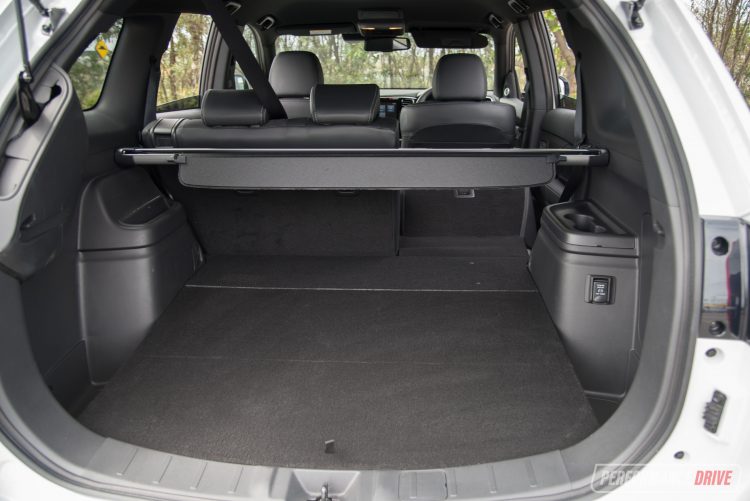 Starting purely with the performance of the PHEV setup, it is great to see you gain power with hybrid over the conventional engines on offer – you’re not sacrificing, in other words. It is made up of a 2.4L naturally aspirated four-cylinder petrol engine that produces 94kW, and two electric motors; 60kW for the front wheels and 70kW for the rear wheels. A maximum combined output is an impressive 157kW, but torque is only 332Nm. On the road, that translates to a 0-100km/h sprint in 9.17 seconds, according to our tests. There are no complaints in the get-up when your foot demands it.

The electric motors are powered by a 13.8KWh lithium-ion battery that needs to be charged up either by plugging the vehicle into a DC fast charger, or your standard 240V AC home power point. Or, you can use the petrol engine by activating the ‘charge’ mode from within the car. Charging via the DC fast charger takes 25 minutes to reach 80 per cent capacity, and a 240V outlet will take seven hours to reach 100 per cent. It’s a very easy system to use if you are lucky enough to have a DC charger within reach regularly. There is a suite of dashboard stats and measurements to look at on the multimedia screen if you are a numbers nerd, too. 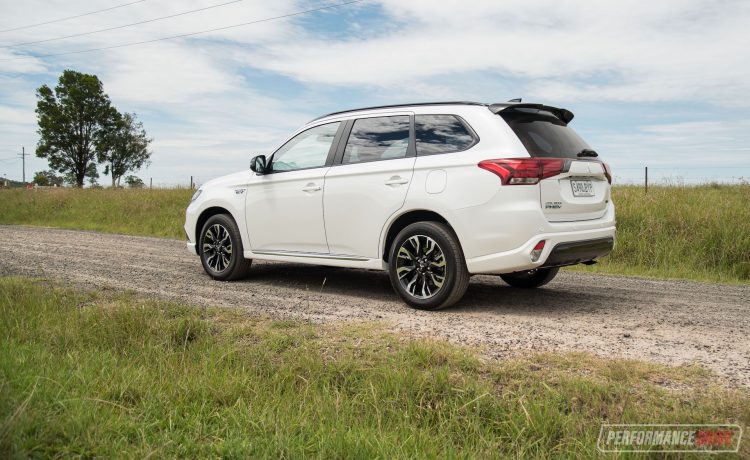 Here is the catch. Fuel consumption is rated at an average of 1.9L/100km on the official cycle. A very good figure. However, you will only consistently achieve this if you plan to recharge the battery roughly every 50km.

During our test with a full battery, it seemed happy to rely entirely on electric power at all speeds if not pushed too hard. This is until it quickly diminishes to empty within around 55km. At this point, the combustion engine is more heavily used, and fuel consumption rises to an average of 9.2L/100km. As mentioned, you can change drive modes to have the engine charge the batteries while driving. But if you do this, expect the fuel consumption to increase further, effectively cancelling out any gains you could make later by using the generated electric power.

Essentially, official fuel usage tests do not take in the full picture. They do not test over an entire fuel tank range where you may not be able to charge it after every short trip. You only benefit from that 1.9L/100km figure for the first 50km, then it will increase quickly until you recharge the battery again. 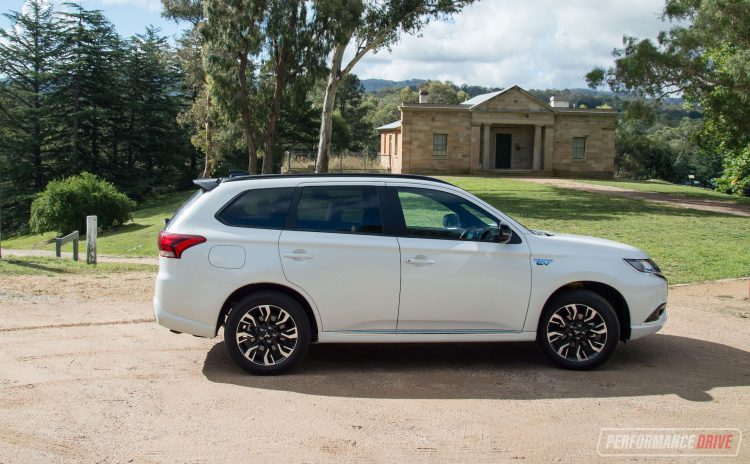 Sadly, electric charging stations are not widely available in Australia. There is also no government requirement to build new multi-storey dwellings with charging stations in them. Australia is well behind in this department, and that does not help the case for the Outlander PHEV. Most buyers will have to charge their Outlander via the slow 240-volt standard power outlet.

The fuel tank is quite small, at 45 litres. So, refuelling will be a common task. But it runs on 91RON fuel, so the fuel bill will be low. 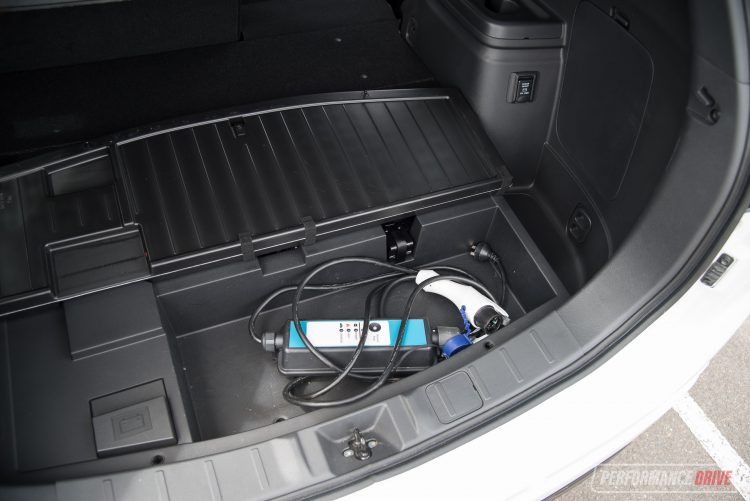 Exclusively to the GSR, you score sports tuned suspension. There are Bilstein shocks and tighter springs underneath to create a less sloppy ride compared with the standard setup. It still exhibits some slovenly body roll and roughness over bumps, but it is sound for the price and market it targets. We’re willing to bet the Bilstein dampers will hold their tension and effectiveness longer than the standard items as well.

All new Mitsubishis now come with a five-year, 100,000km kilometre warranty. But it can be extended to 10 years if serviced at an approved Mitsubishi service centre. Servicing is required every 15,000km or 12 months, and capped-price servicing is offered for up to 10 years at a cost of $4091.

It’s a mixed verdict for the Mitsubishi Outlander GSR PHEV; it’s an old model now, but it is a familiar, tried and tested medium-sized SUV that still gets plenty of safety features and tech. The appeal is broadened by a practical interior and the option of seven seats for some variants.

The benefits of the plug-in hybrid really depend on your location, lifestyle and availability of charging. With a short electric range of about 50km, you’d need to live in the city and have access to power outlets to enjoy the full fuel-saving potential. The technology is great and Mitsubishi has been a pioneer in this segment, but it is now time to welcome the new generation model.

PROS:
– Competitive pricing throughout the entire range
– One of the few SUVs in this segment available with 7 seats
– If you have easy and regular access to charging, huge fuel savings can be enjoyed
– PHEV does not mean you have to compromise on power, it packs plenty of punch
– Bilstein dampers are a nice touch

CONS:
– ‘Hybrid’ operation (petrol and electric) has ordinary fuel consumption; only 54km electric range
– Ageing model, old switchgear inside (new model coming end of 2021)
– PHEV is not ready for off-road adventures (Mitsubishi’s website has a full disclaimer warning about it)