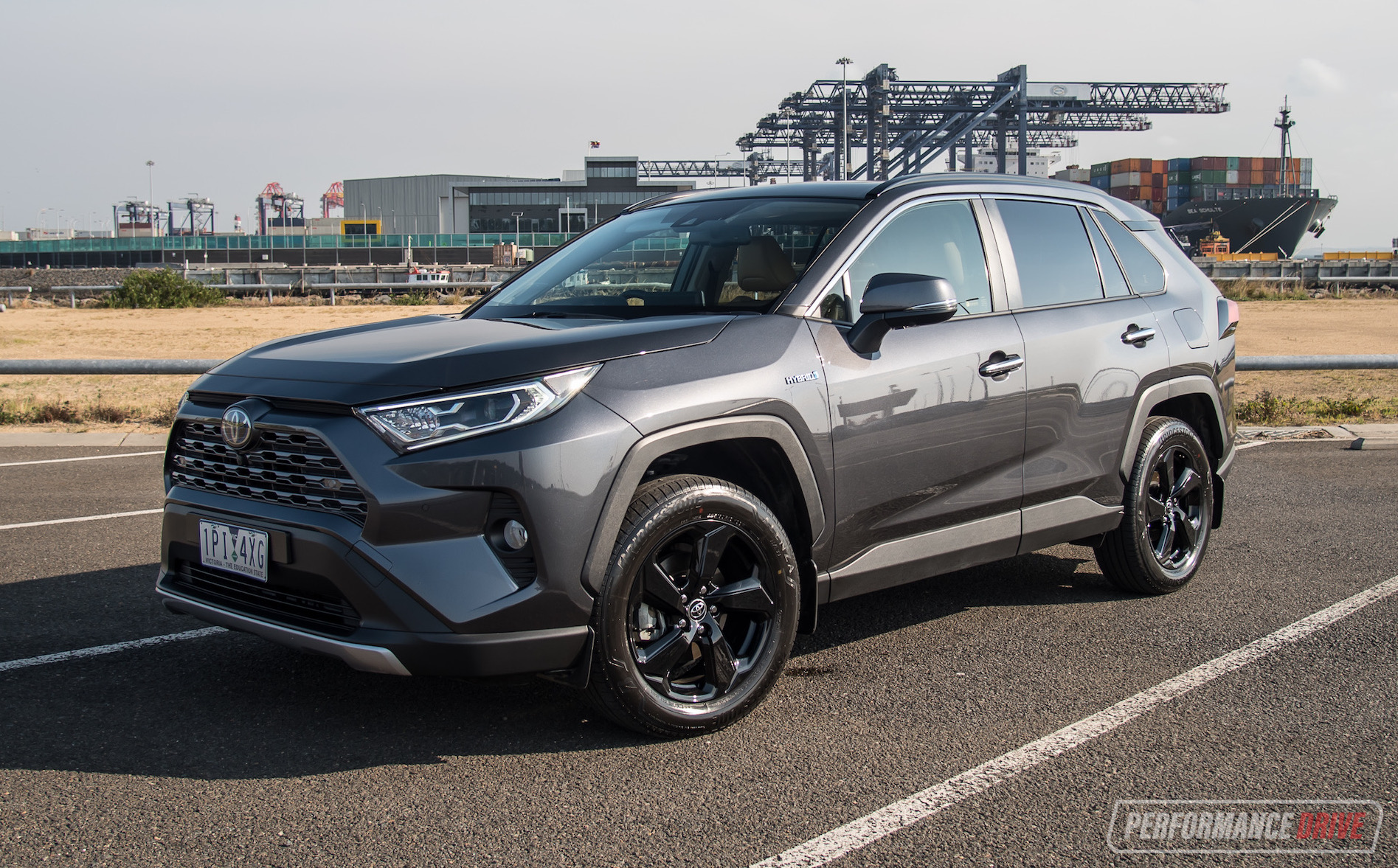 Toyota is off to a cracking start with the new-generation RAV4, accumulating a tonne of sales in its first year on the market. In fact, it’s been such a success that it’s about to overtake the Mazda CX-5 to become the best-selling SUV on the Australian new car market this year. 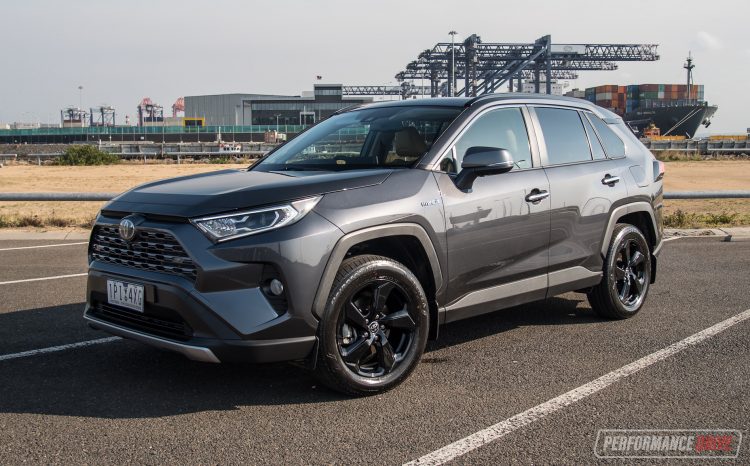 As we write this the year is just about to come to an end, and we eagerly await the December VFACTS new vehicle sales figures. However, up to November, Toyota has racked up 22,048 sales of the RAV4 in Australia. That’s only just behind the current best-selling SUV, the Mazda CX-5, which has posted 23,711 sales. RAV4 figures across the 11-month period are up 7.9 per cent compared with last year, while the CX-5’s are down 2.0 per cent. In other words, it is going to be an extremely close finish between the two.

The sales numbers give us a strong indication of the sway in demand and popularity for the new RAV4. So, it must be a good thing, right? Well, the 11-variant range spans wide and far, with four different powertrains options including two hybrids (2WD and AWD) and two different petrol setups (2.0L and 2.5L). And then trim levels span from the GX, GXL, Cruiser, to the almost-special-edition Edge variant. Uniquely, the Edge is powered by an exclusive 2.5-litre petrol-only engine that’s mated to the range’s only eight-speed auto. As you can see, Toyota is providing a variety of options to cover as much of the market as possible.

Here we’re testing the Cruiser with the all-wheel drive hybrid configuration. The Cruiser used to be known as the flagship model, and it still kind of is, but the Edge tops the lineup in terms of pricing. Speaking of which, this specification Cruiser retails from $44,990 (excluding on-roads). That’s actually more affordable than the previous flagship model, the Cruiser AWD diesel, which started from $50,500. It also undercuts the Mazda CX-5 GT 2.5T, which would be the closest equivalent rival for the Cruiser (one below the flagship CX-5 Akera), starting from $48,390. In fact, even the RAV4 Edge is priced lower than that, at $47,140.

Without even stepping foot in the vehicle we can already begin to understand why the new RAV4 is attracting attention from buyers. Enough of the figures, though. Let’s take a closer look at the Cruiser. 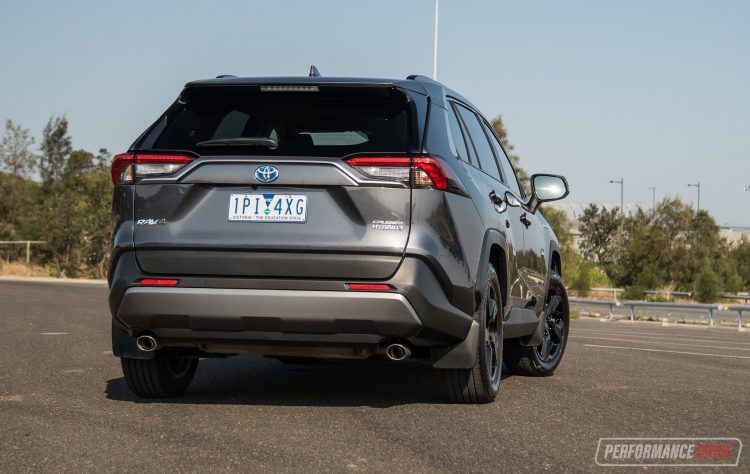 Toyota has done a wonderful job on packaging of the new model, across the range. Even if you go for the base GX model, you’ll be surprised by the sheer level of standard equipment and convenience-focused features. All models come with Toyota’s latest 8.0-inch touch-screen multimedia interface packed with sat-nav, voice recognition, digital radio, and a rear-view camera as standard.

It’s not the best touch-screen in the business in our opinion, as some of the around-screen buttons are a bit small and difficult to read, while the on-screen menus are quite basic in terms of colour and graphics. However, it is a big improvement over the previous Toyota system, and, like most setups, you do get used to it and it all becomes second nature. 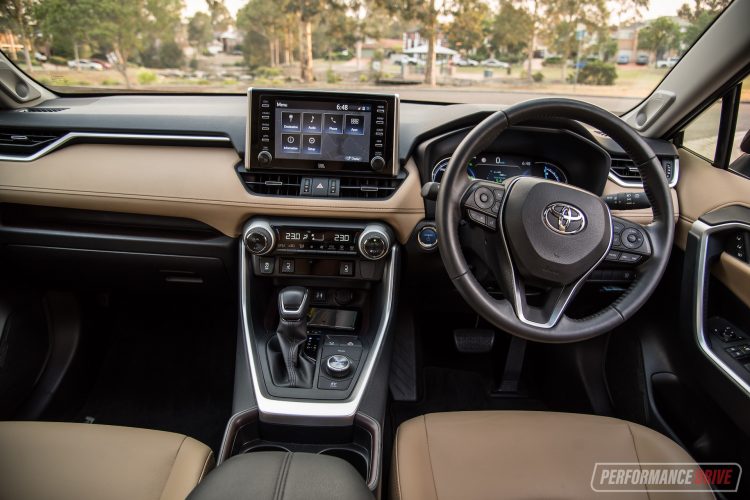 With the Cruiser variant there’s dual-zone climate control and a nine-speaker JBL sound system added in. We love the climate control knobs that are coated in what looks like tyre tread, with matching knobs for the volume and tuner. We also love the padded areas for the wireless phone charger (standard on GXL, Cruiser, Edge), the base of the cup holder cluster, and the neat little shelf that runs across the passenger side of the dash. It all seems very well thought-out and innovative, and clearly designed to be a practical as possible.

Passenger space in the front is excellent. Even though the cabin orientation has gone from a tall and upright layout in the old model to more of a lower-slung wagon-like theme for this new model, there doesn’t appear to be any sacrifice in headroom. Toyota’s New Global Architecture (TNGA) has obviously helped out here to optimise space efficiency. Legroom is also impressive for this class, and there’s a good sense of airiness to help with long-distance comfort and to minimise any of that fatigue you sometimes get from cluttered surroundings. 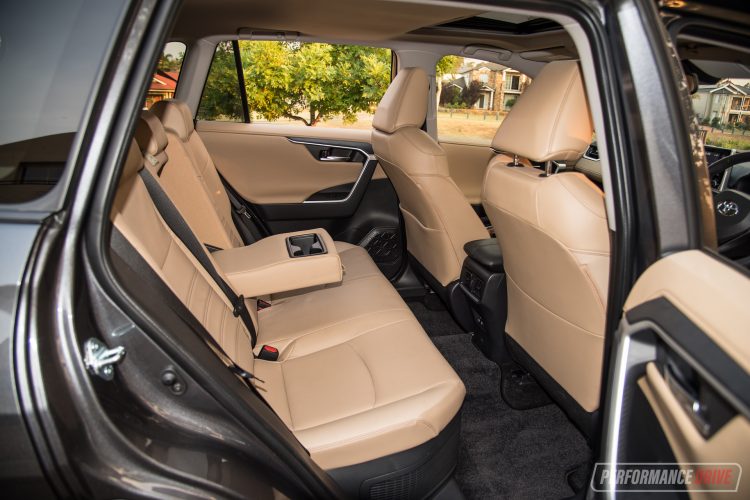 Rear seat comfort and accommodation is outstanding for this class. Legroom is abundant, and the seat height is perfect for a simple step-in and step-out manoeuver. There’s also twin climate vents and twin 2.1A USB charging ports in the back, twin cup holders from the flip-down centre arm rest, and bottle holders in the doors. Everything you need is here.

Boot space is rated at 580L, which, again, pushes the boundaries of the class standards. Most models come with a dual-level boot floor to make it more versatile, and there’s a space-saver spare wheel right underneath. If you go for the GX you can opt for a full-size spare, but that removes the dual-level capability and reduces the default volume to 542L. 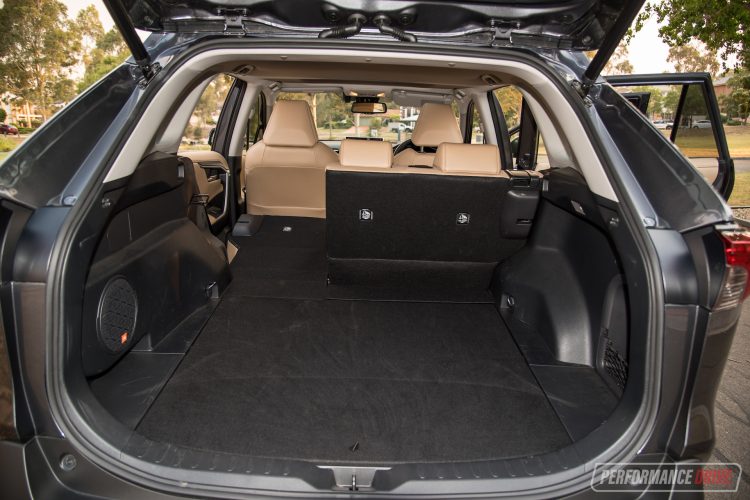 We really like what Toyota has done with this new platform. Now the RAV4 feels much more like a station wagon to drive, as opposed to the somewhat heavy-duty feel of the old model. The steering is light and easy, and now it turns into corners with pleasure – unlike before, it used to feel a bit uncomfortable turning in.

The ride comfort is also spot-on for this class, ironing over Australia’s backroads with very little judder or tram-lining character. In that sense, the composure and compliance is in a completely different (and better) world than the previous model. You can drive in a sporty manner and the RAV4 responds surprisingly enthusiastically. It’ll hold its line and remain committed to the corning arc, although, the 225/60 Bridgestone Alenza tyres fitted here do eventually yelp for mercy. 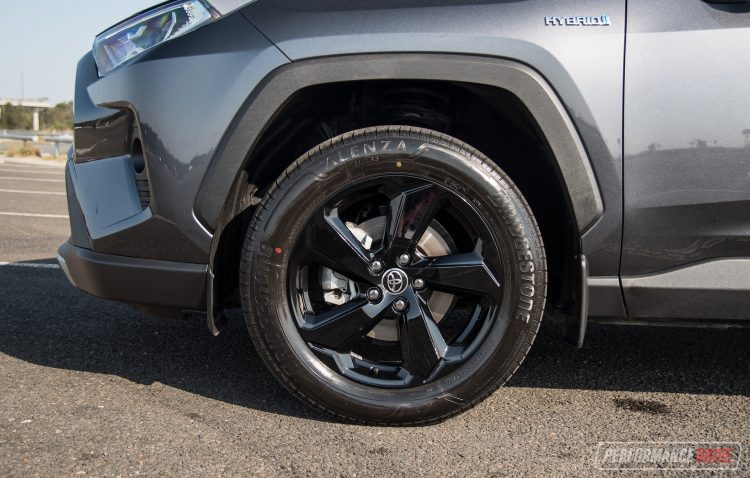 Going for the AWD hybrid brings in three electric motors. There are two generators for the engine and transmission, and another electric motor which is the sole energy source for the rear axle. This means that under normal conditions, the system can operate in complete front-wheel drive mode to save fuel. Conversely, engaging the Trail driving mode fires up (zaps?) the rear electric motor for all-wheel drive grip. And in fact Toyota says the system is able to drive with up to 80 per cent of the total drive torque coming from the rear wheels.

On the official combined cycle the fuel usage is stamped at just 4.8L/100km. There aren’t many rivals that get close to this. In the real world we recorded an average of 5.6L/100km over a week of driving (587km in total), which included performance testing. This is an extremely impressive result for the real world. A lot of the economy is down to the RAV4’s ability to drive on electric power alone for short periods, and at low speeds. 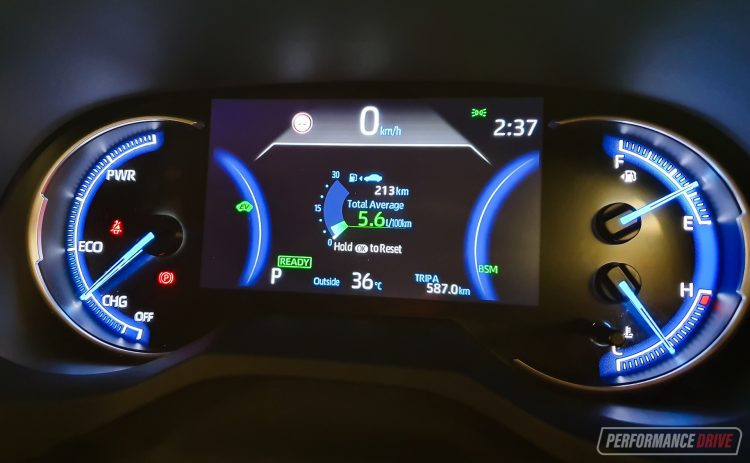 You can keep an eye on all of the trip information and driving stats via the instrument cluster. It’s not quite a fully digital cluster, but it does provide plenty of information and it is fairly easy to toggle through the display options via buttons on the steering wheel. There’s even a display that shows the real-time power distribution and energy recuperation processes.

So, with such good economy, does this mean it is very slow? Hybrid technology has come a long way over the last five or so years. Unlike early generation hybrid setups which were primarily focused on economy, today’s systems also provide very respectable performance compared with petrol-only and even turbocharged engines. The instant power and torque of an electric motor is unsurpassed, effectively reducing the lag of the progressive power delivery of a conventional engine. 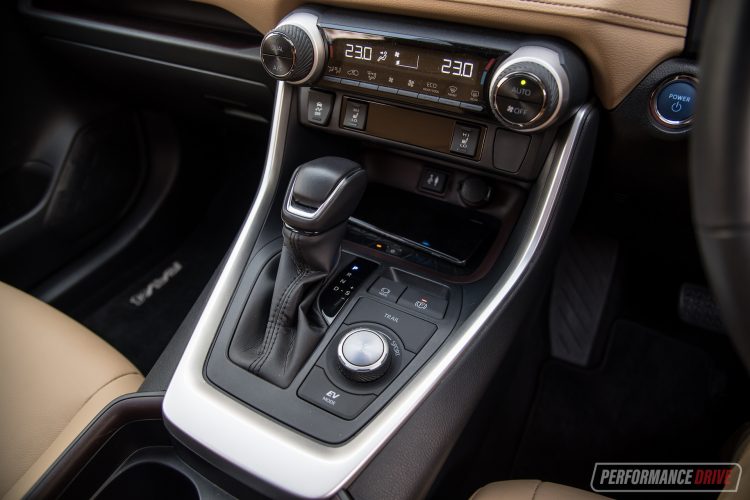 It’s a marvellous powertrain overall, especially for this class and for this price point. Paired with the TNGA platform which presents great balance and ride comfort, this is a winning combination. The only potential downsides to the drive experience in our view are the CVT auto, which is pretty boring as per usual CVTs, and the fact that the AWD hybrid only increases total power by 3kW compared with the 2WD hybrid.

There have been some production delays for some models, but once these are fixed up, we won’t be surprised at all if the RAV4 overtakes the CX-5 to become the most popular SUV in Australia. Toyota has obviously worked very hard to nail the perfect formula for this vehicle category. The new RAV4 is fun, adventurous, very economical in hybrid form, and now really good value for money.

If you are looking for a new purchase in this space, we strongly recommend you check out the new RAV4 range. We think it sets new standards in almost all of the important areas for this class.