Volkswagen is apparently set to unveil the new Volkswagen Golf GTI cabriolet at the 2012 Geneva Motor Show early next month. The Golf cabriolet has been around for some time, but this is the first sporty GTI version since the Mk1 Golf Cabriolet of 1974-1983. 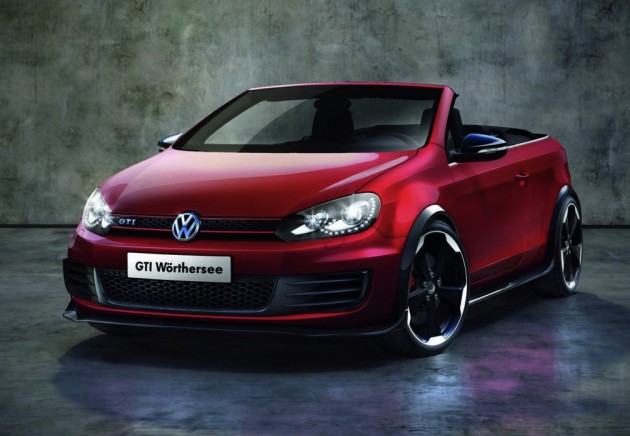 According to reports, the Golf GTI cabriolet will be the last iteration of the Mk6 Golf until the all-new Mk7 arrives next year. Like the GTI cabriolet concept revealed at the Worthersee 2011 Volkswagen show in Germany, the cabriolet is set to be based on the two-door Golf platform.

It’s believed the new Volkswagen Golf GTI cabriolet will feature the same 2.0-litre TSI turbo four-cylinder engine producing 155kW of power and 280Nm of torque as the current GTI. Both manual and DSG dual-clutch auto options are on the cards. Acceleration from 0-100km/h is expected to take around 7.0 seconds.

It could be a fun little car if the rumours come true. It’s nearest rival would be the equally fun MINI Cooper S Cabrio, which is much smaller. The GTI cabriolet is expected to feature five seats, while boot space could be reduced over the normal Golf due to the fold-away space required for the roof.

We’ll have to wait and see for official confirmation. The Geneva show starts March 6.