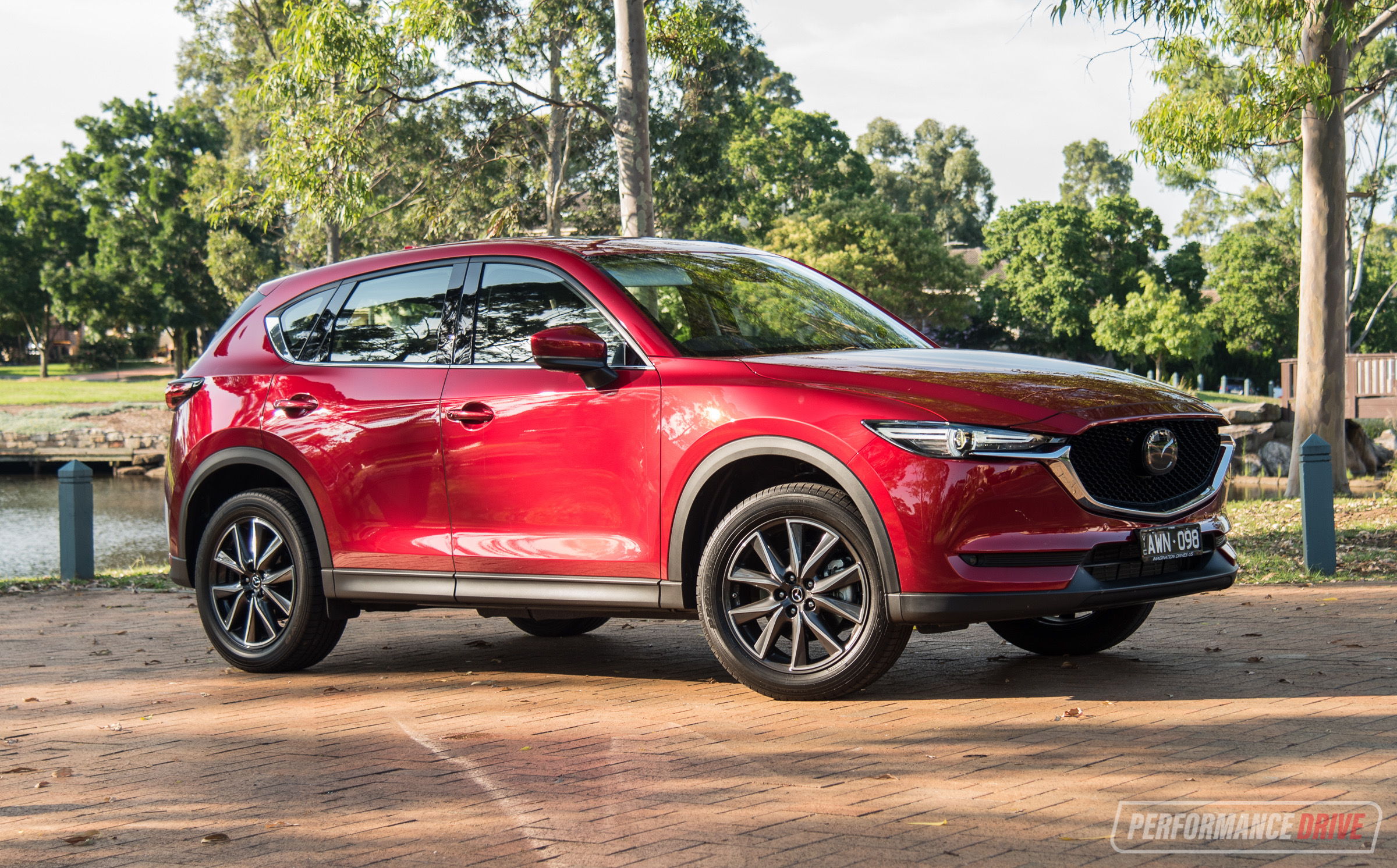 Mazda’s flagship mid-sized SUV has finally succumbed to the benefits of turbo power with a petrol engine. The CX-5 is now available with a boost from the 2.5-litre turbo petrol engine seen in the Mazda CX-9 and Mazda6. 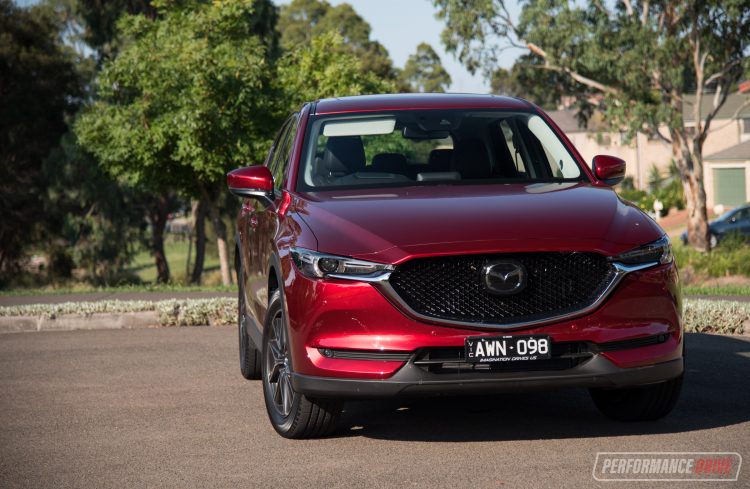 But to get your hands behind the wheel of one, you’ll need to purchase either the GT or Akera top-end variants. We’re guessing it will only be a matter of time before the engine is offered in more variants, and perhaps even replace the existing 2.5 non-turbo petrol.

The new engine, which produces 170kW and 420Nm, is paired with a six-speed auto transmission and feds to an all-wheel drive system. We’re testing the GT, which starts from $46,970. The top Akera version is priced from $49,170 (before on-road costs). 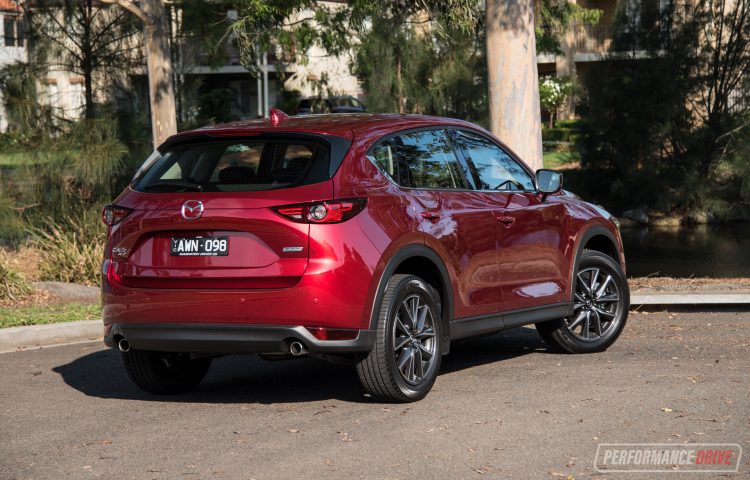 Mazda seems to have earned a winning formula when it comes to design. Australians love the look of the latest range. The CX-5 inherits the large grill and small headlights with a protruding bonnet shape like a bull shark. Many curvy contours flow along the body to produce a strong and fluid appeal.

The interior is a wonderfully familiar place too. Tried and won over by many already, yet still modern and user-friendly. Materials are presented with a high-quality feel and bring a certain elegance to the segment.

Once you invest some time into getting used to the MZD Connect media interface and the hand controlled down near the gear shifter, it becomes very useful in helping you keep your attention directed on the road. It’s easy to steer through all the menus, without the need to reach out to touch the screen – touch-screen functionality is there but it disables when the car is moving. 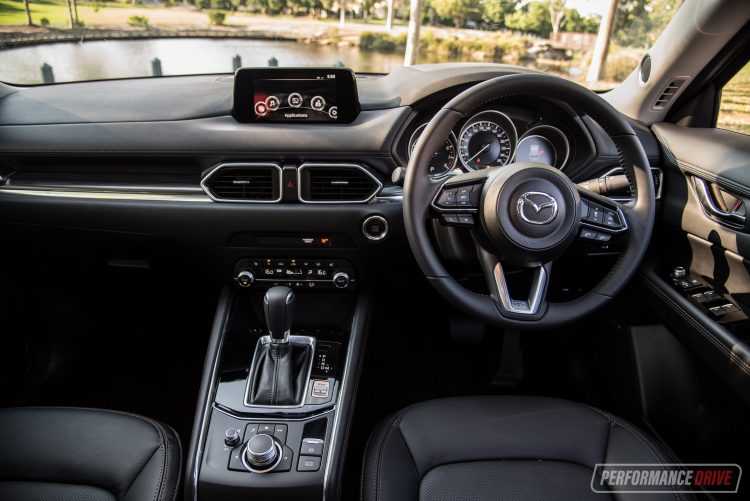 In what you’d expect from the Japanese-built Aussie favourite, the seats are beautifully supportive and fit for long trips. And that’s regardless of whether you’re in the front or rear. There’s a plethora of adjustments that can be made to suit all shapes, and an abundance of storage pockets and little cavities for your things.

Resale value is a strong point for Mazda. And the brand now offers a generous five-year/unlimited kilometre warranty. However, servicing is required every 10,000km or 12 months, which is comparatively frequent if you plan to do lots of kilometres. 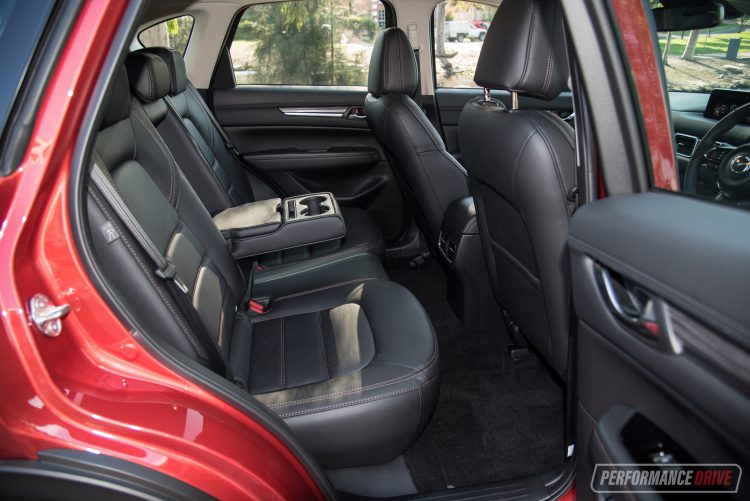 PerformanceDrive welcomes the new turbo engine with open arms. It produces 170kW and an impressive 420Nm. It’s worth noting that Mazda claims if you fill up with 98 RON petrol, power is boosted to 185kW. Either way, it will aggressively throw down the gears and get up to speed enthusiastically. The engine is happy to rev, although it peaks out at a bit over 5000rpm, but the torque levels are a blessing compared with any other petrol model in this market segment.

The official 0-100km/h time is 7.7 seconds, and our testing revealed 7.63 seconds. The main area where it lags behind some of the competition is in fuel consumption. We couldn’t gather a rate lower than 9.5L/100km, which is quite a lot more than the official 8.2L average. Your fuel bill will be higher than most of the competition. And with a 58-litre fuel tank, it means you’ll only be able to travel about 500km before refuelling. 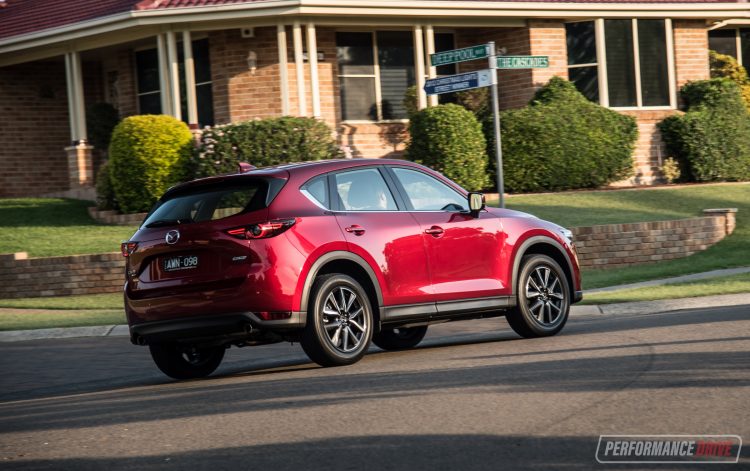 Although six gears would be considered low compared to other SUVs on the market today, the engine ties with the gearbox perfectly. Being the torquiest petrol engine in this class, you really don’t need more gears to divide up and spread out torque. It does just fine with six gears, and we guess it is smoother than others as there are fewer gear changes.

Gear shifting is so smooth and refined, you never feel it as a passenger – under light or heavy acceleration. It thinks ahead and selects the right ratio before you accelerate out of a slow turn as well, and doesn’t just jump into higher gears as soon as it can like some rivals. However, we guess some extra ratios could help to reduce fuel consumption overall. 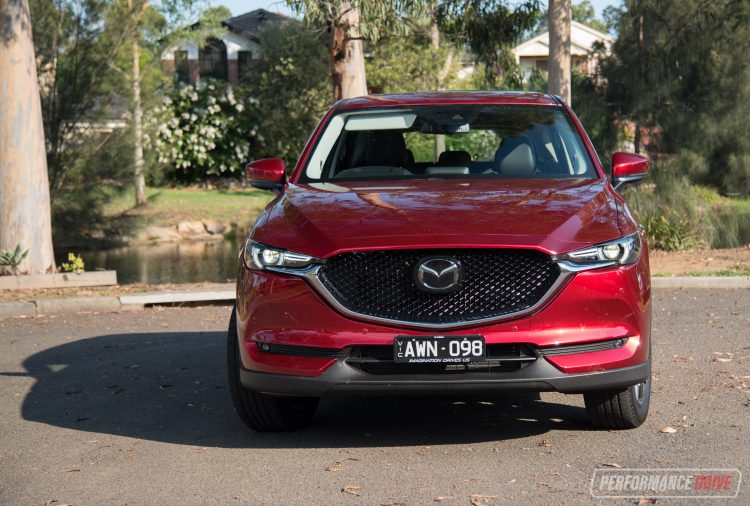 On the road, the CX-5 does not feel like an SUV. It feels nimble and light to throw around. Bumps are absorbed confidently, most of the time, except when taking a corner or braking at the same time. It can get shaken up and can feel a little nervous when pushes hard or when encountering corrugations. Road noise and vibration levels are kept to an absolute minimum. In our opinion, the CX-5 is still one of the most refined SUVs in this department.

Our tested GT variant is only available in all-wheel-drive. But there are no selectable off-road modes or diff lock functions. This gives you an idea of what this vehicle is intended for: mainly the soccer run and the odd weekend adventure. It does okay in light dirt road duties, but it is more designed to stick to the bitumen.

The Mazda CX-5 is still at top-of-class in many areas, including refinement, quality and design. It doesn’t feel like an SUV to drive either, but it also doesn’t have some basic off-road driving modes that other SUVs have. That probably won’t concern most drivers.

In terms of the new turbo-petrol engine, it is highly welcomed and gives a decent power boost over all other variants. Though, you do need to play the premium price to get it (only available with GT and Akera). Fuel economy is satisfactory but far from the most appealing. For that you need the twin-turbo diesel version.

CONS:
– Not the most off-road-friendly SUV in this class
– Six speeds considered outdated?
– Fuel consumption a bit high