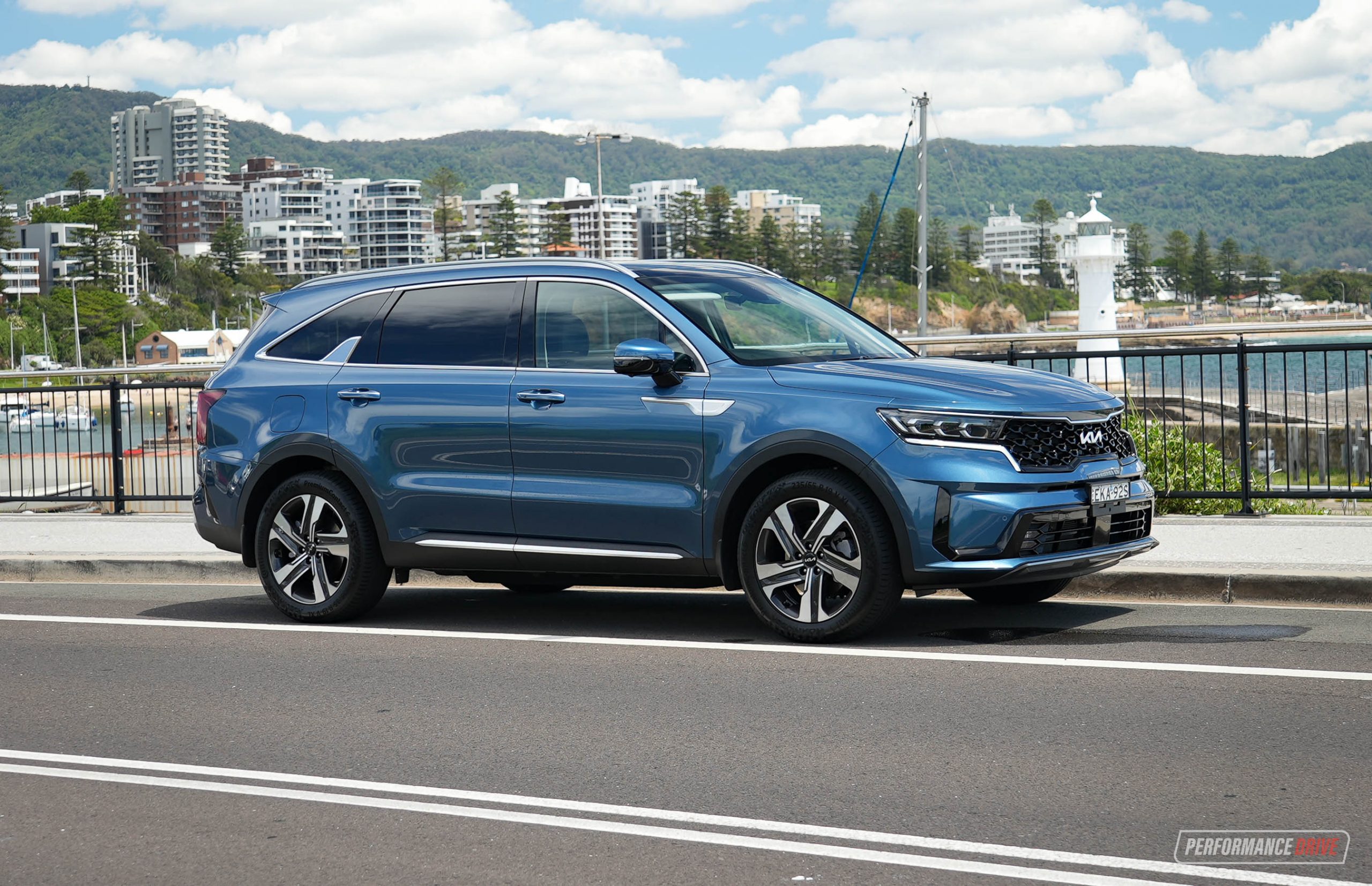 Up until now, Kia has been quiet on the electric/hybrid phenomenon. Prior to 2022, the Korean brand only had one model dedicated to the new technology, the Niro. But going forward we should start to see more existing nameplates offered with hybrid choices. The first cab off the rank is the Kia Sorento. Adding to its petrol and diesel engine options is a plug-in hybrid petrol/electric combo. 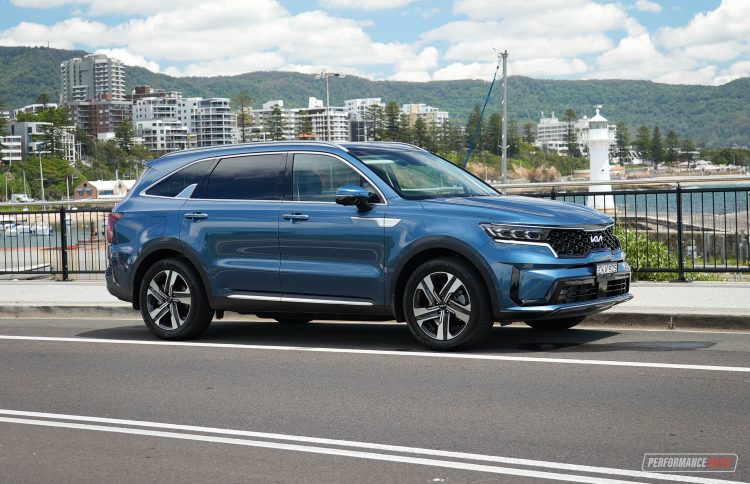 It makes sense to offer its biggest, thirstiest model as a PHEV (Plug-in Hybrid Electric Vehicle) first. It competes with the likes of the Toyota Kluger hybrid (though, not a plug-in hybrid) and to some extent, the Mitsubishi Outlander PHEV (in the smaller mid-size class).

The Sorento PHEV is quite expensive, starting from $80,330. That’s partly because it is offered in the top trim GT-Line only. Prices for the GT-Line with conventional engines start from $65,990 (all excluding on-road costs). 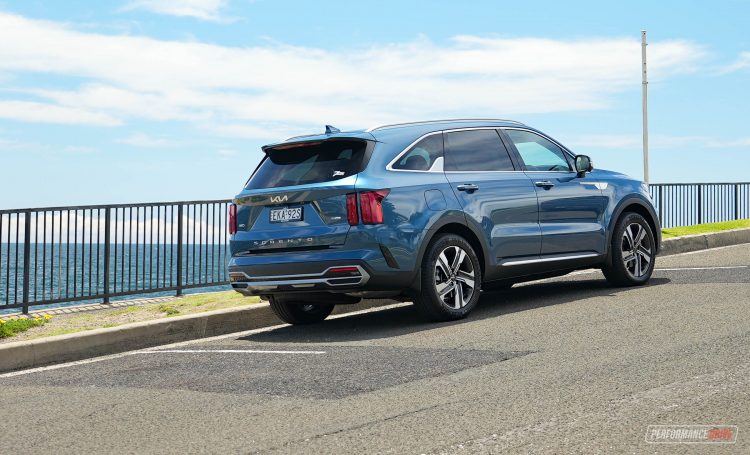 Kia designs lead the way in many segments in our opinion. The front end of the latest Sorento tackles the road with a sharp stance, from the carefully crafted tri-section headlights to the chiselled glossy black ‘tiger nose’ grille. It contrasts perfectly with neat chrome surrounds. Gone are the days of a bulgy, unfit shape for the nameplate. The rear takes a renewed look with sharper creases and vertically-opposed taillights. All of which help to make the Sorento appear more athletic and agile than before.

The Sorento’s modern appeal is also backed up by a class-imposing interior. It showcases components like bushed metal surrounds and inlays with a snakeskin pattern. When the customisable mood lighting shimmers through them at night, it looks brilliant. There are also lots of glossy black areas that add sophistication. Materials look and feel particularly premium in the GT-Line as well, right down to the buttons and knobs. 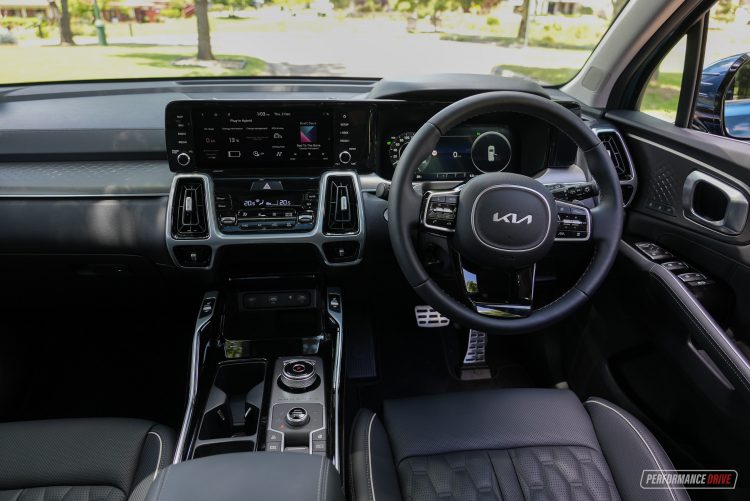 Another eye-catcher is the crisp 10.25-inch centre touch-screen and the 12.3-inch TFT digital instrument cluster. The high contrast and menu designs are fresh, yet easy to navigate. A $65k price tag is easily justified when you add together the amount of equipment that comes with the GT-Line. But $80k might be pushing the envelope. 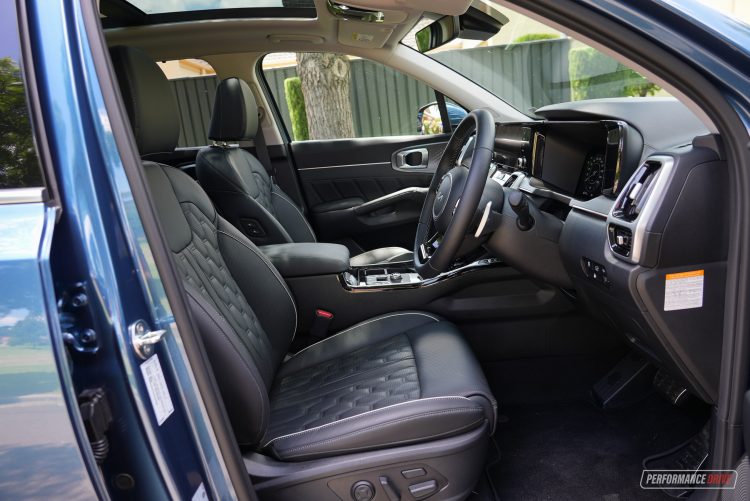 In terms of safety, the list is comprehensive. Some highlights are forward, reverse and junction collision mitigation with braking, front and rear cross-traffic alert, blind-spot sensors, lane-keeping and lane following assist, passenger safe exit assist, and auto high beam. Sadly, airbags for the third row have been omitted.

The Sorento will effortlessly accommodate five adults with long legs. And if you have an even larger crew, the third row suffices for kids, or shorter distances for adults too. To make bustling in and out as simple as possible, the second-row slides on rails and reclines 60:40. There is also a one-touch flat-folding mechanism. 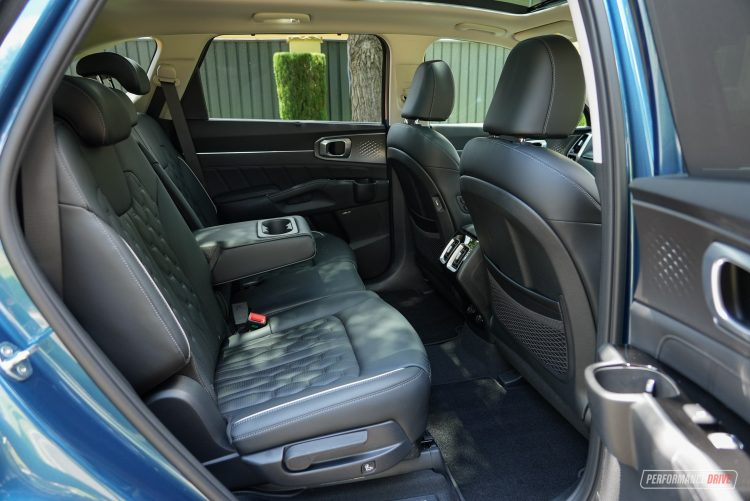 Boot space is slightly reduced for the PHEV GT-Line to make room for the battery pack. Using the VDA measuring standard, you get 604 litres with five seats upright, 1988 litres with two seats upright, and 175 litres with all seven up. These are competitive figures, especially considering the PHEV comes with a full-sized alloy spare wheel under the rear.

Kia offers peace of mind with the most generous warranty on the market; a seven-year, unlimited kilometre warranty. Servicing is required every 10,000km (5000km less than non-PHEV models) or 12 months, at a capped price. 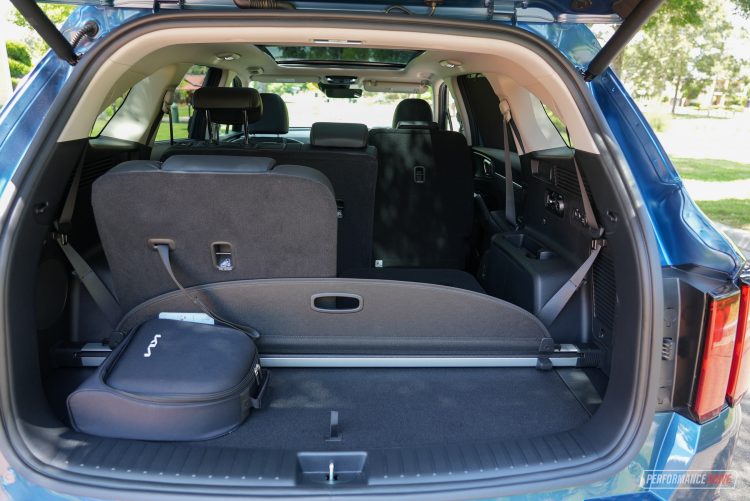 Here’s the breakdown underneath the Sorento PHEV’s bonnet. You get a 1.6-litre turbocharged ‘Smartstream’ four-cylinder petrol that develops 132kW and 265Nm on its own. It pairs with a synchronous electric motor that is powered by a 14kWh lithium-ion battery stored under the second-row floor. They are charged when braking, by the engine, or by plugging into an AC single-phase charger supporting up to 3.3kW.

The electric side produces 67kW and 304Nm on its own. When you combine both energy sources, it is not just a matter of adding them together. They collaborate to produce a maximum of 195kW and 350Nm. That’s pretty decent power for this vehicle, but the torque isn’t all that impressive.

Behind the wheel the Sorento PHEV feels effortless in getting up to speed. There is no shortness of breath. Immediate levels of torque from the electric motor can be felt on take-off while the small engine builds its momentum. They both complement each other harmoniously when hard acceleration is demanded. The boost from that turbo engine jumps to action quickly as well. We tested 0-100km/h in 8.33 seconds using a Vbox, which is about 0.2 seconds quicker than the diesel GT-Line we previously tested. 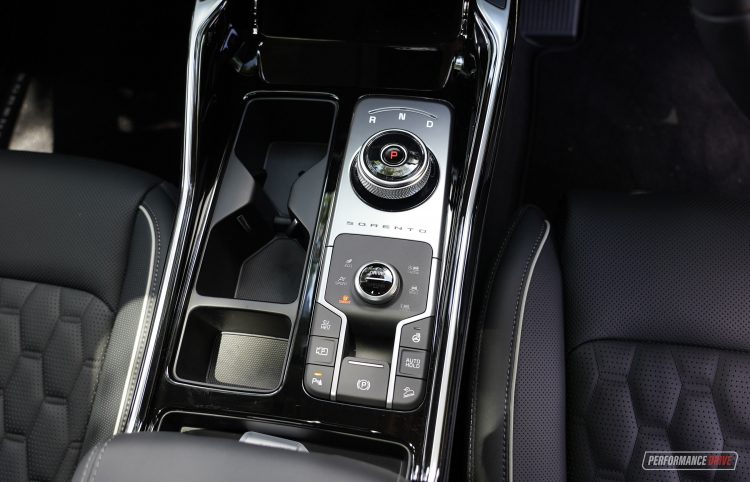 The great thing is you can choose to run on petrol or electric solely – on the proviso that you have charge in the battery. If fully charged you will be able to travel for about 68km (based on the NEDC measuring standard). We were able to get 67km out of it during our testing. Essentially, if your commutes are less than 68km return, you can run the Sorento PHEV as a fully electric vehicle and never use the petrol side. All you would need to do is keep the batteries charged, and not accelerate too heavily as this activates the petrol engine to produce more oomph.

You can also charge the batteries with engine charge at the touch of a button. This temporarily increases fuel consumption though so we’re not quite sure where the advantage lies with this function. 68km might not sound like a huge range, but it could be perfect for drivers with the same short commute lengths who also might feel a fully electric vehicle is a bridge too far at this stage. 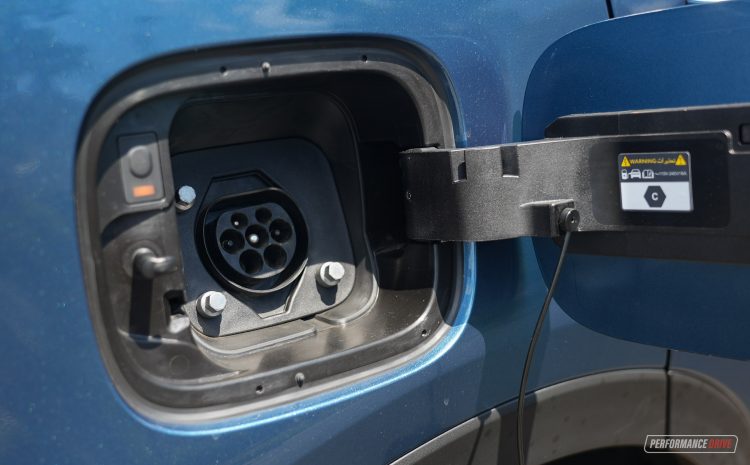 The official 1.6L/100km average fuel figure does not mean much, as it only reflects the average consumption recorded in a very specific set of circumstances. In fact, this average has little meaning at all in our view. If you have full battery charge and run on electric only for 68km, your average fuel usage will obviously be nil.

If you don’t charge the batteries at all and run it in hybrid mode, you might expect an average like we experienced, of 6.6L/100km. It included a mix of highway and city driving. Then, in the middle, if you commence with fully charged batteries, and continue to drive until the batteries and petrol tank are depleted, you can travel about 800km and will get an average of about 5.5L/100km.

So, you need to think about how you will drive it to see if you will get the maximum benefit. Our guess is the 1.6L/100km rating comes from a test where it travels for 80km with a full battery that depletes after 68km and so travels for only 12km on petrol.

Kia’s in-house built six-speed automatic gearbox is used in the Sorento PHEV. And it is a standout in terms of being ultra-smooth and quick to transition through the gears. It’s also nice to see proper automatic in a hybrid and not a CVT. 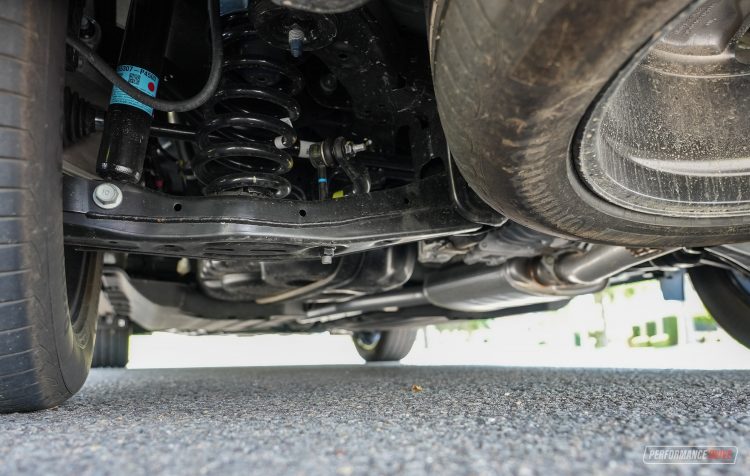 Turning to dynamics, and the Sorento PHEV is one of the few SUVs where comfort does not compromise dynamics. With local tuning done specifically for the Aussie market, it handles quick turns better than expected. Nasty potholes are dealt with smoothly and quietly, and you get the added traction benefits of all-wheel drive.

This has a tare weight of 2052kg while the equivalent GT-Line diesel weighs in at 1908kg. You can feel the added weight around tighter corners, but most of it is lower down, helping to optimise the centre of gravity. Pushing harder does result in mild understeer and tyre squeal coming in earlier than the non-PHEV models. In general conditions though it steers nicely and feels very confident and refined for this class.

Unfortunately, choosing the Sorento PHEV means you won’t be able to tow anything significant. Engineering for electric and semi-electric vehicles has not yet matured in this area in same classes. The towing capacity for the Sorento PHEV drops from 2000kg to just 1350kg compared with the non-PHEV variants. 1350kg is nearly equivalent to a Toyota Corolla’s towing capacity. 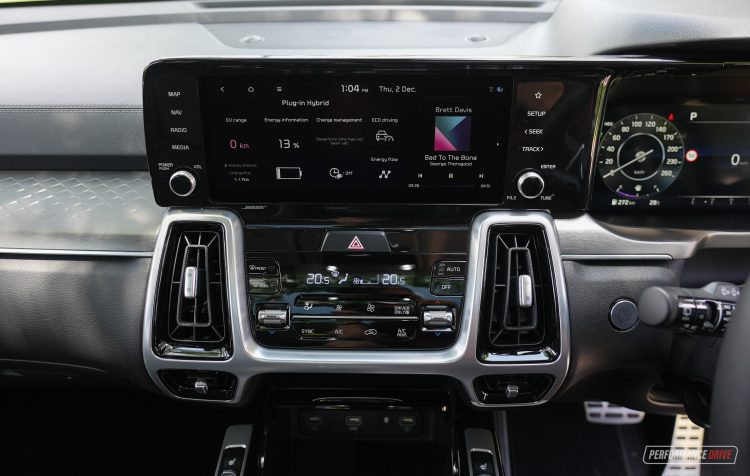 Before the PHEV GT-Line came along, the Kia Sorento was already a brilliant SUV with a modern design, loads of features and plenty of room. But as fuel costs rise, the PHEV fills an emerging market. It gives you the benefits of electric vehicles without abandoning petrol altogether in one quick swoop.

The plug-in hybrid goes one better than a standard hybrid SUV because you can run fully on electricity alone, for about 68km. But this is at a premium of about $15k over the standard GT-Line. Here’s to hoping the cost of PHEVs decreases and their towing capacities are improved.