For Porsche fanatics and Ruf fans alike, this is one of those raw videos that you need to turn up the volume and just sit and enjoy. There’s no talking, it is simply a few minutes of automotive brilliance. The video is thanks to Sport Auto magazine in Germany. 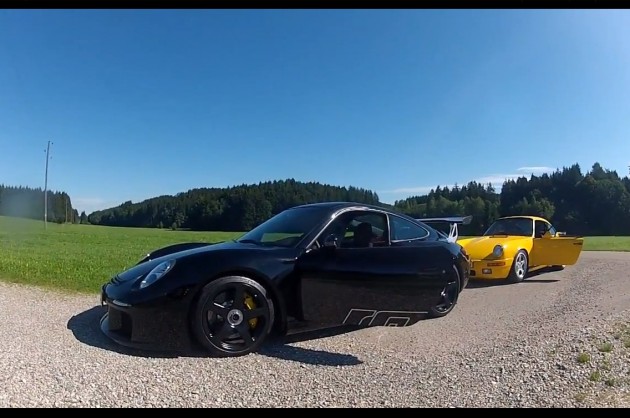 Ruf Automobile, for those who don’t know, is a manufacturer in its own right. It produces Porsche-based vehicles from its small factory in Pfaffenhausen, Germany.

One of the company’s latest projects is the awesome Ruf RGT-8. It features a 4.5-litre V8 using a flat-plan crank allowing up to 8500rpm. As you can hear in the video, the RGT-8 sounds like a superbike. Maximum power is rated at 405kW; astonishing for a naturally aspirated engine.

Meanwhile, the Ruf CTR ‘Yellowbird’ is perhaps the company’s most iconic vehicle. It was once the fastest production car in the world, recording a mind-blowing top speed of 340km/h. It uses a 3.4-litre flat six twin-turbo engine producing 350kW. In a car weighing 1170kg, we’re talking truly incredible performance.

The CTR in this video is the original Yellowbird prototype – famously known as the star in the ‘Faszination at the Nurburgring’ video – as evident by the cutaways in the rear haunches.

Seeing these two chasing about on the streets of Germany is what gets the performance car juices flowing. Click play below to take a look. And don’t forget to turn it up.