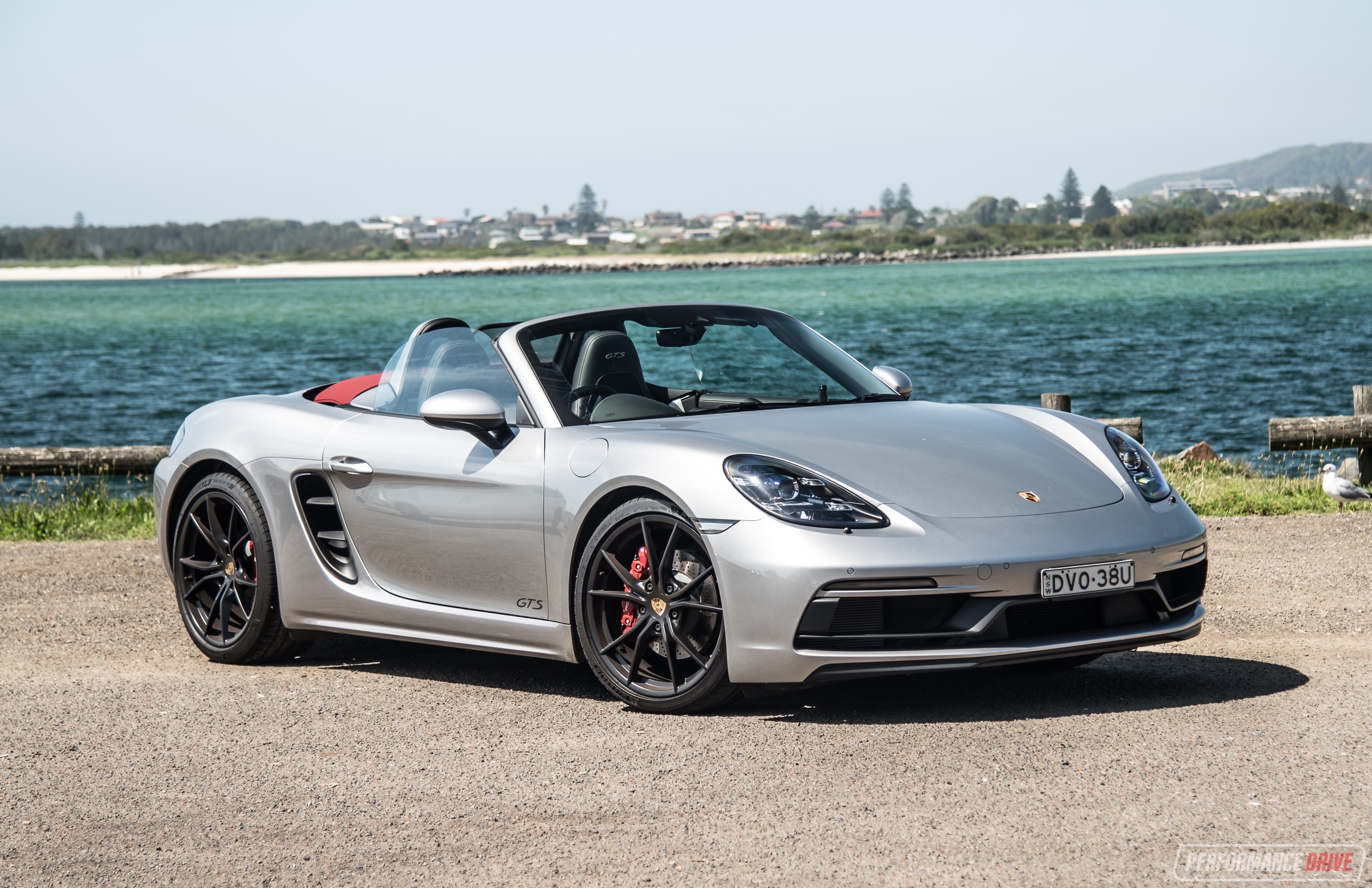 Sitting at the top of the foodchain as Porsche’s entry level sports car, it’s a hard life for the Boxster GTS. Because, for one, it’s very pricey. To the point where it is snapping at the heels of the 911. But it is extremely quick. And the handling is sublime. Does it justify the price, though? Let’s take a look. 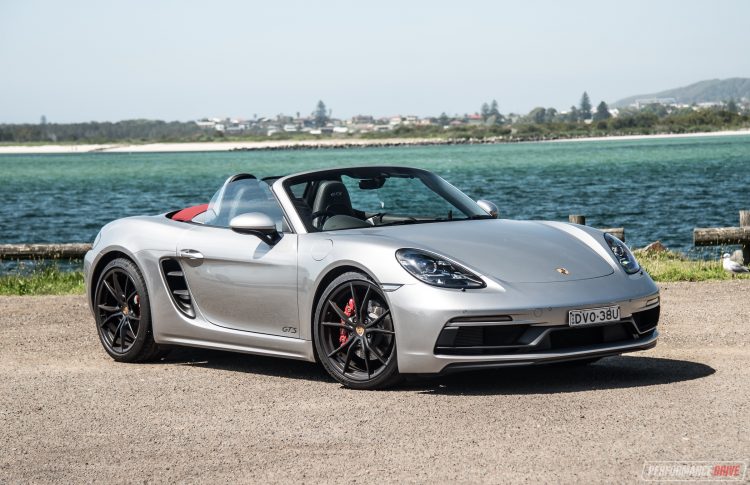 The Boxster GTS, or 718 Boxster GTS as Porsche would prefer you call it, is the flagship model in the 718 range at the moment (also available as coupe; Cayman). In other words, it’s the fastest and most powerful variant, and perhaps the flashiest to look at with the unique black alloy wheels and neat aero kit and whatnot.

What seems to be annoying a lot of Porsche purists for this new model is the engine. Instead of a traditional flat-six like most of Stuttgart’s finest, the latest GTS adopts a 2.5-litre flat-four engine. With a big turbocharger breathing heavily into it, the boxer vier produces an impressive 269kW and 430Nm.

Porsche will probably be one of the last carmakers to offer a manual transmission. So it comes as no surprise the standard GTS uses a six-speed manual. What we’re testing here is the seven-speed dual-clutch ‘PDK’ automatic. 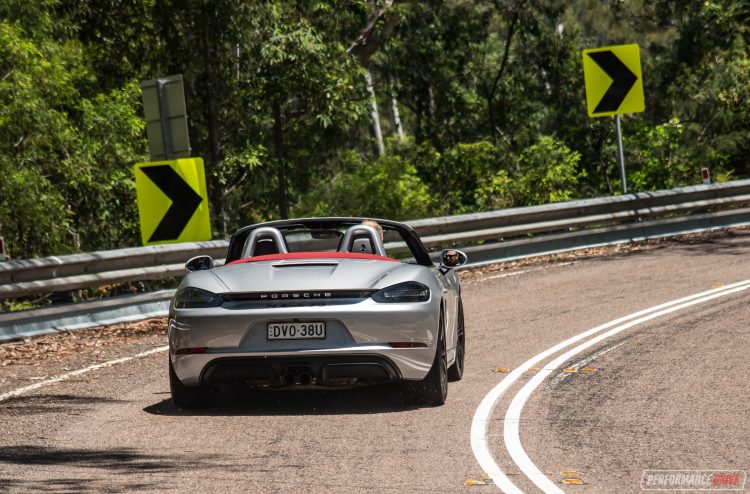 From the outside there’s no doubt this is a thoroughbred German sports car. It has something of the 550 Spyder about it, in that it kinda looks like the back could be the front and vice-versa. Porsche has applied its four-pointed box LED headlights to the Boxster range by now, following its bigger showroom brothers, and the rear end showcases that fashionable full-width taillight (or taillight housing in this case).

In GTS spec it does look a bit angrier than the regular 718. There’s a set of 20-inch satin black alloy wheels, staggered in size with 235s on the front and 265 on the rear, with the sinister black trimmings including for the headlight surrounds, front and side intake grilles, and exhaust tips. 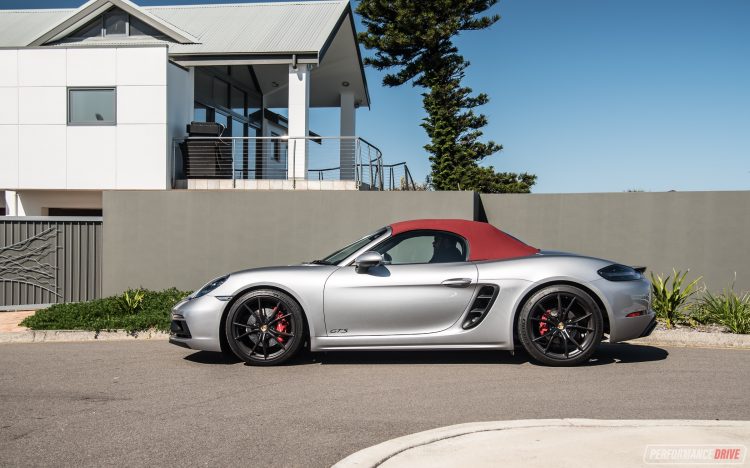 We love the fastidious German build quality inside. It feels like every component has been delicately meshed into place with the tolerance of hair-thickness between fixtures. All of the buttons and controls have a distinct solidity to them, and the instrument dials only show you what you need to know in a clean, mess-free layout.

Trimmed in soft Alcantara, the seats are supportive and surprisingly adjustable, and capable of accommodating taller individuals. However, after a longer drive it can start to feel a little cramped. This nice-to-touch material extends to the glove box, while leather wraps the rigid centre console which feels like it could be the base plate for an i-beam on a construction site; it’s that sturdy and well built. 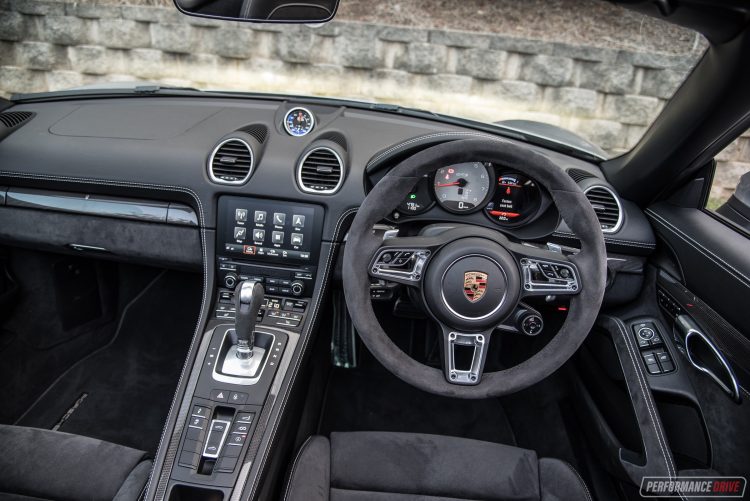 Porsche continues the cascading layout for the controls near the refined yet masculine gear selector, with toggle switches for the climate control, all making it look and feel like you’re about to take off in a light-speed spaceship. It’s very cool and definitely enhances the theatre and build-up to commencing a drive. Some of these lower buttons give you options for the drive modes, including the adaptive suspension, and also the bi-modal exhaust, adjustable rear wing and the stop-start system.

Flipping back the roof is easy and takes around nine seconds. You can do it on the go as well, which is great if you suddenly encounter a downpour of rain, so long as you don’t drive at over 50km/h. With the roof up it obviously becomes a more confined and intimate environment in the cabin, while the roof down is the more exciting and fun setting.

Contrary to what you might think, especially when talking about a Porsche, the Boxster (and Cayman) are mid-engined. This means the engine sits just behind the cabin, behind the seats, leaving some room for a boot behind the rear axle. There’s also a boot forward of the front axle. These provide up to 275L of storage, which is about enough for a weekend bag or two and a picnic basket. Unfortunately, storage space in the cabin is very limited. There are no exposed cup holders (only flip-out ones) and only a small centre console box. 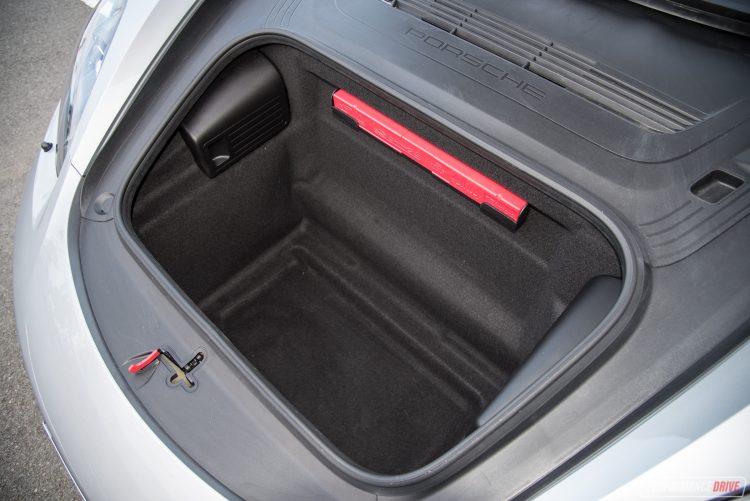 This is the part that’s the most important. Porsche is synonymous with pure driver’s cars and is perhaps the longest-running carmaker to continuously concentrate on this area of motoring. It, arguably, has the most experience in this field. And thus, in our opinion, should know better than to fit a rowdy four-cylinder engine.

We’re sorry to report, and we’re afraid Porsche probably won’t lend us another vehicle for saying this, but this engine really does detract from the overall enticement and desirability of this car. When it starts up, especially cold in the morning, it sounds like a tuned Subaru WRX with one of the spark plugs missing. It’s really rough. And not in a good way. 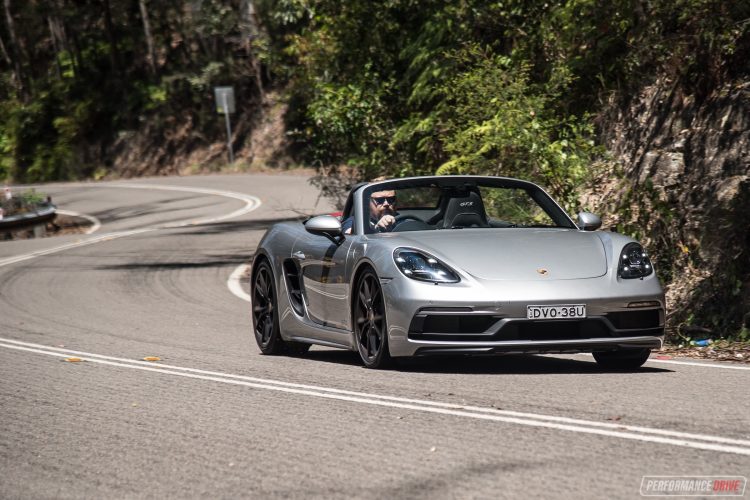 People are going to be watching you as you drive off up the road, because, let’s face it, it’s a junior supercar so why wouldn’t they be looking. But unfortunately they don’t get an exotic soundtrack to listen to. And this really is a shame. We know, engine and exhaust sound isn’t the most important thing. But in a sports car, particularly one that costs near-enough-to $200,000, we think it is important. This doesn’t sound like $200,000 driving up the road. Complete silence would at least provide a sense of luxury compared with this.

This is just in regards to driving around town and so on, which is where you’re going to be spending most of your drive time. Get out into the mountains and you’ll soon forget that rugged idle. Peel back the roof, hit sport plus mode and go for your life. Because this thing is just born to drive. 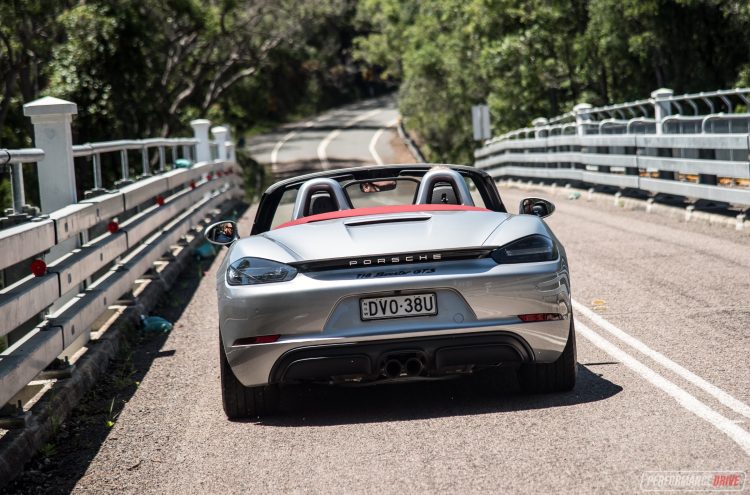 The performance from the engine is incredible. Although 269kW might not seem like much, it comes in at 6500rpm. Which is pretty high and perfect for a sports car. It gives off a concentrated, high-tempo roar during high revs, too. Peak torque, all 430Nm, is available from just off idle at 1900rpm and held until 5000rpm. That’s an insane breadth, and it means you don’t need to rev it out to enjoy very serious acceleration. But you can if you want to.

Using the standard launch control system we clipped on the Vbox and recorded an amazing 0-100km/h best of just 4.02 seconds. We tried around five launches because we really wanted to break into the 3.0-second zone, just for our own entertainment. However, 4.02 seconds is unbelievably quick. We also clocked the quarter mile in just 12.13 seconds. Again, we wanted to see the 11-second range but for a sports car of this nature, extremely low 12s is astonishing. 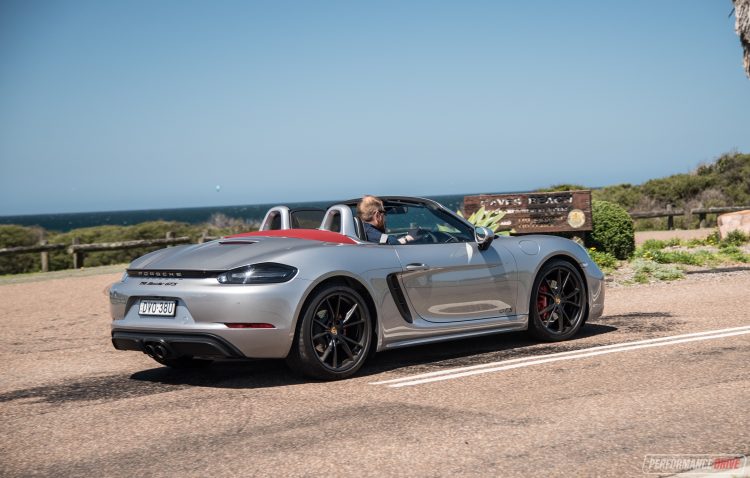 So, knowing these numbers, you can imagine the lightning speed it pulls in between corners. It jumps to them like a frog, basically skipping over the straight bits. And you don’t really need to worry about slowing down. Porsche is renowned for braking performance, and you can see why. We clocked a best 100-0km/h stop in just 32 metres. Usually we test cars and they take around 39-42 metres.

That measurement doesn’t tell the full story, either. You can repeatedly jump on these, corner after corner, and there’s no fade or diminishing pedal feel. At all. Speaking of which, the pedal feel is perfect. It gives you real confidence coming into corners as you can make fine adjustments with your foot and feel exactly what’s going on at the disc. 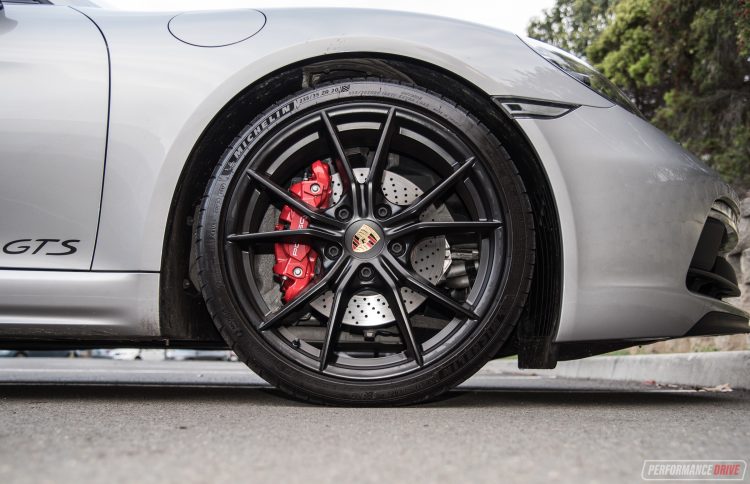 And then when it’s time to turn? Flawless. Utterly flawless. High-speed sweepers feel controlled and stable, while in the tight and really twisty stuff the GTS is super-agile and very precise. You get excellent feedback through the steering wheel, which is placed perfectly at your chest for an ideal driving position.

So, although it doesn’t sound good as a general run-around, when it comes to performance driving there isn’t much wrong with this car. With the roof down it is very exciting to drive as you get all of the outdoors rushing right past you, heightening that sense of speed and occasion.

Ordinarily, for a modern car, we’d say go for the dual-clutch auto. But the style of driving the 718 Boxster presents, we reckon the manual would provide a purer and more engaging adventure. We also think the auto, while extremely quick and smooth, doesn’t seem right for the flat four engine.

We love this as an extremely well built, fast and highly capable sports car. But for the money, you can just about get yourself a 911. This engine sound is also very disappointing for something that’s meant to be a slice of German automotive exotica. Lastly, yes it is extremely quick off the line with the dual-clutch auto option, but matched to the noisy flat-four, it’s somehow an odd combination. It just doesn’t feel right.

If you are considering buying one we’d recommend going for the manual. But what we’d really recommend is walking away from this and heading over to the 911. Wherever you got the circa-$185k from ($209k with options, as tested) to buy this, gather up a bit more and you can have yourself a legendary thoroughbred. The 911 starts from $220,500.