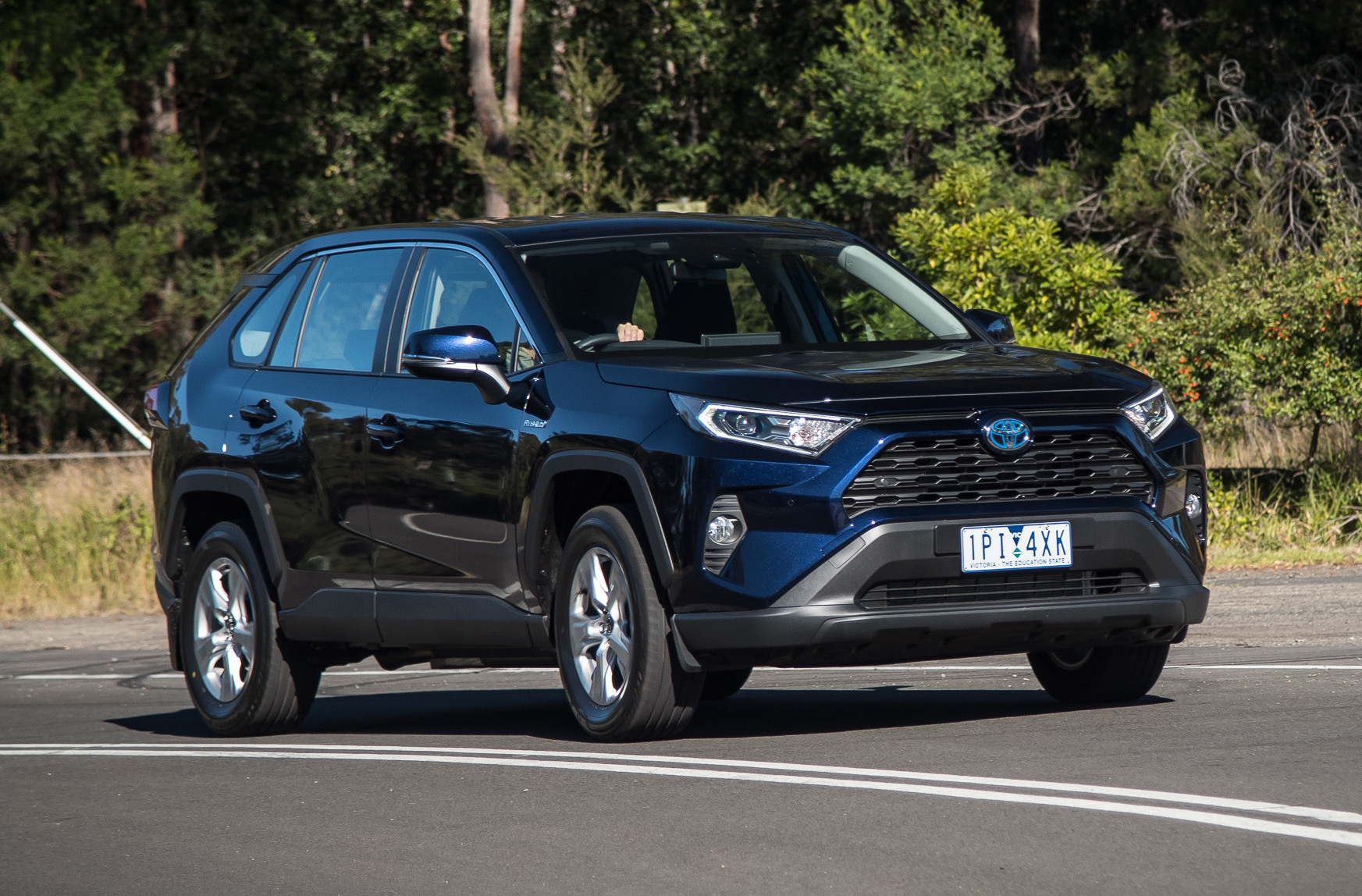 The RAV4 is, and has been for a number of years, the definitive SUV. It pioneered this segment. And now they’re one of the hottest tickets for the car buying public. In recent years we’ve seen a number of manufacturers throw their hat into the ring arguably because cars like the RAV4 are being eaten up like a proverbial stack of pancakes. 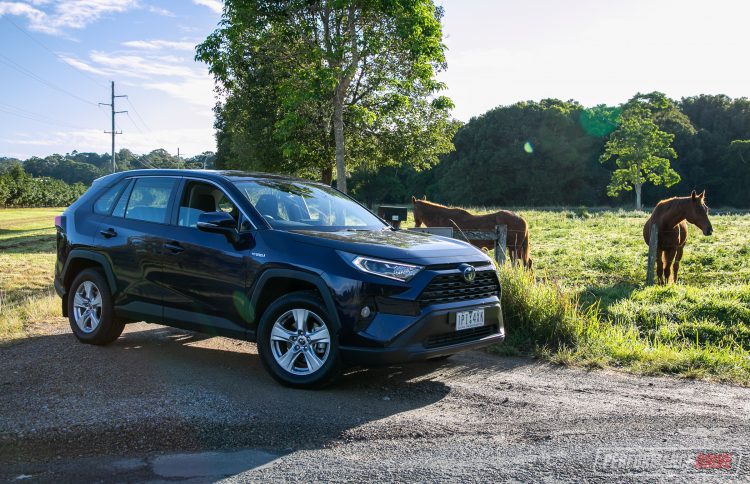 We thought the best way to celebrate the launch of an all-new generation of RAV4 was with an archetypally-Australian road trip. The reasoning behind our trip was to get a feel for the RAV4 in its natural habitat, which on school holidays will no doubt include a cruise up the Pacific Highway from Sydney to the Gold Coast. Or, in our case, to Byron Bay. A long trip like this also gives us a chance to identify the real-world pros and cons of owning a RAV4 GX hybrid. 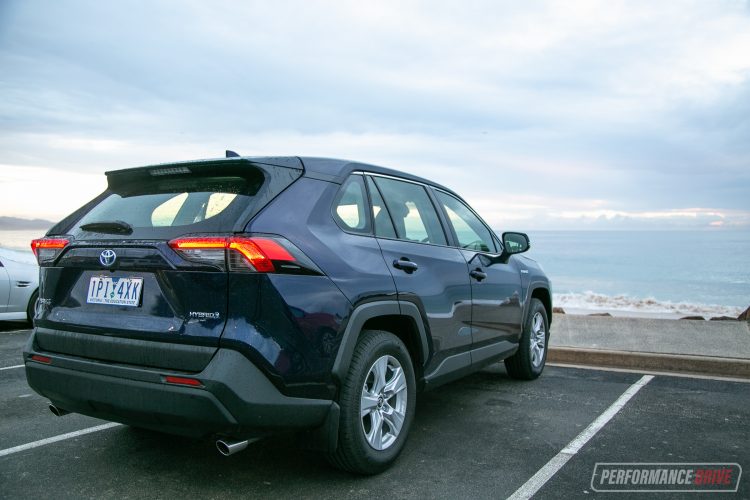 The GX sits at the base of the RAV4 lineup, coming in from $35,140 plus on-roads, which is $3000 less than its AWD bigger brother. While Toyota holds out on goodies like the sunroof, keyless entry, electric boot lift and wireless charging offered in the more expensive variants, Toyota is throwing in a heap of safety equipment to sweeten the deal, even on the base GX.

Blind-spot warning, rear cross-traffic alert, adaptive cruise control (we’ll get to the benefits of that later) as well as autonomous emergency braking all come as standard. This is on top of dual-zone climate control (with new, funky rubber-lined dials), a touch-screen infotainment system with navigation and Bluetooth connectivity, electric mirrors, an array of cubby holes and a number of USB ports for phone charging. Apple CarPlay and Android Auto connectivity will be available later this year, according to Toyota, via a complimentary software update. 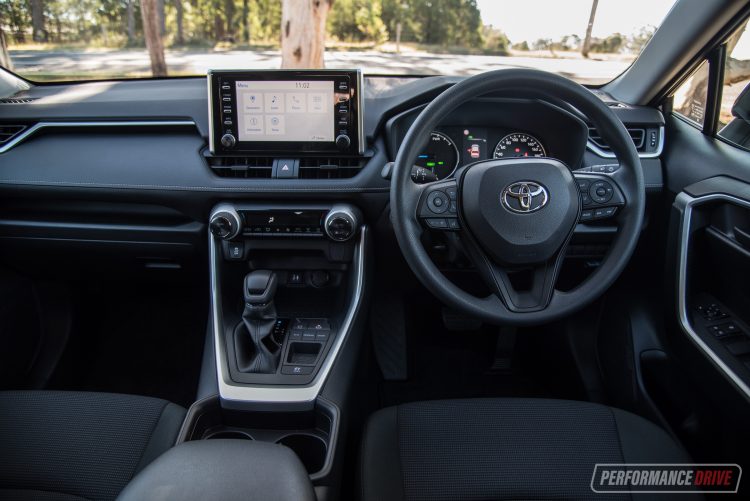 Any points about the RAV4’s styling we make here are completely redundant; you’ll either love it or hate it. One point we can make, however, is that after a week with it in the metal, the styling grows on you. There’s little doubt that the front fascia has been inspired by Toyota’s North American vehicles, and this will polarise its reception, but one undeniable thing about the refresh is you certainly can’t throw any allegations of the styling as boring. The rear might look uneasy to some, but you can’t win them all.

You can however throw that complaint firmly at the RAV4’s interior, which features a very monotone trim. We guess this is the base GX but some colour wouldn’t go astray. 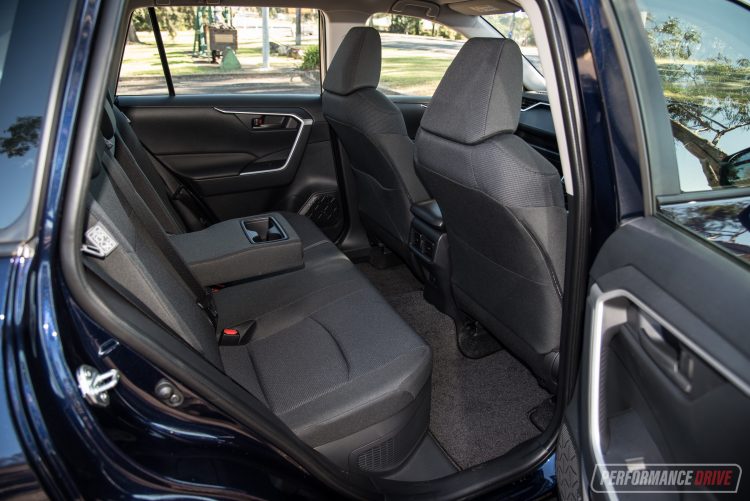 Having said that, the packaging is everything you’d expect from Toyota. There’s a plethora of stash spots and cubby holes around the cabin to eat up the belongings a lengthy trip with kids will throw at you. It’s plain to be seen that Toyota has paid keen attention to making the interior spacious and very practical. It feels a lot more spacious than its rivals.

Around the back there’s 580L of boot space on offer. If you go for the GX Toyota is offering an optional full-size spare wheel, which seas the space reduced to 542L, while all other variants (including this test car) come with a space-saver. And for those of you with kids, Toyota has made it as easy as possible to throw in a baby seat thanks to a number easy to reach ISOFIX points. 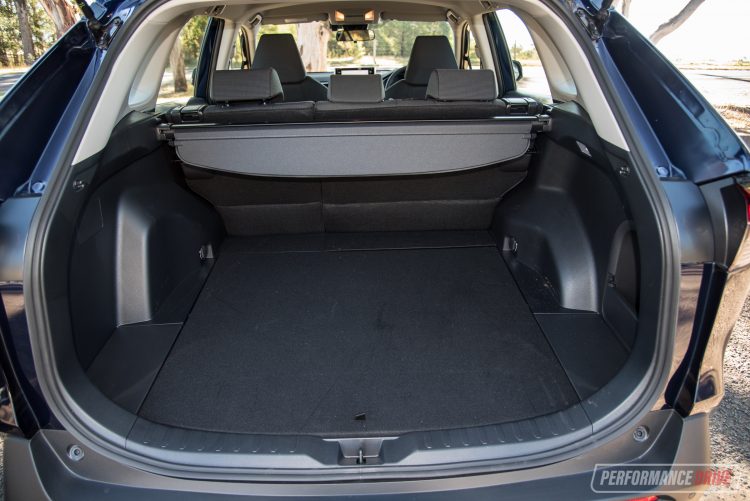 While it might be a mere base model, the GX has a surprising amount of power. The hybrid comprises of a 2.5-litre four-cylinder Atkinson Cycle engine, good for 131kW and 221Nm on its own, mated to an 88kW/202Nm electric motor. This equates to a combined 160kW for the 2WD variant, and 163kW for the AWD. The AWD gets an extra 40kW/121Nm from an electric motor positioned on the rear axle, and yes, we’re not sure how this equates to just 3kW extra. Toyota is a bit shy when it comes to releasing combined torque figures.

That power is fed to the front wheels via Toyota’s CVT transmission, which it has stuck with for a number of years now for its hybrid offerings. The obvious benefit of this is smoothness and efficiency, but it does somewhat detract from the driving experience when you’re pushing it. 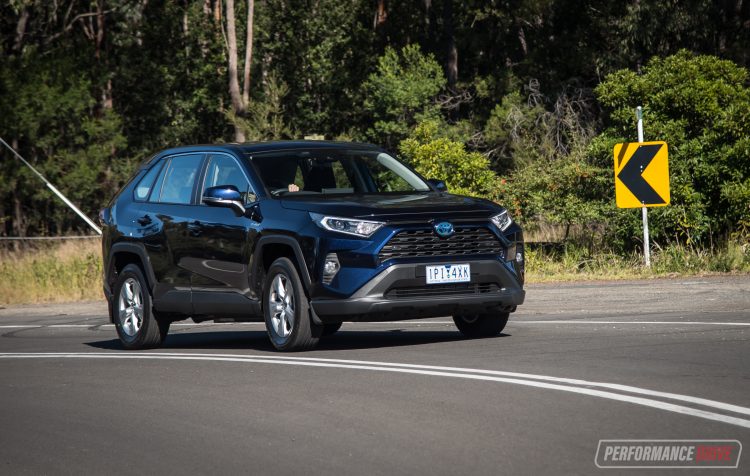 As you can probably anticipate, the RAV4 will eat up any road trip you throw at it. On the highway, the adaptive cruise control and lane-keep assist mean the RAV4 cruises with comfort and ease. Set up your cruise speed and turn on the adaptive lane keep function and you’ll need to do little more than stay awake and watch the scenery fly by. Toyota has also paid some attention to mid and rear pillars, as visibility is noticeably better than most of its soft-road competitors.

Holding the RAV4 together is Toyota’s beaut new TNGA platform. It has a more refined suspension setup than the predecessor, and driving dynamics are significantly improved. It’s comfortable without being spongy in the corners, and firm enough to minimise body roll. On the absolutely terrible B-roads around the NSW north coast, the RAV4 does a great job of soaking up the bumps, staying stable and minimising cabin disturbances.

In terms of fuel economy, despite the fact that this is a big car packed with a load of equipment, the RAV4’s economy is terrific. On the highway you’ll find yourself averaging less than 5.5L/100km with the family on board. Figures in sub-5s are also possible if you’re cruising around solo. Again, in a car of these proportions, all we can do at this point is take our hat off to Toyota. 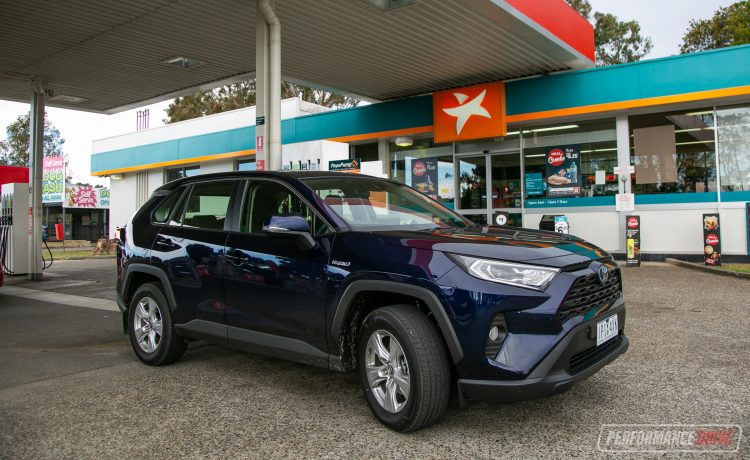 The RAV4 is everything you’ve come to expect from a Toyota product in 2019, with a little bit of charm and character thrown in. Our blue beast undertook a long east coast road trip perfectly. The power combined with the economy means you don’t have to make any sacrifices, and with its improved driving dynamics the RAV4 gives the driver more engagement than ever previously offered. We say this with no hyperbole intended; this is the best RAV4 Toyota has ever made, and now, even more so, one of the most appealing SUVs in this class.