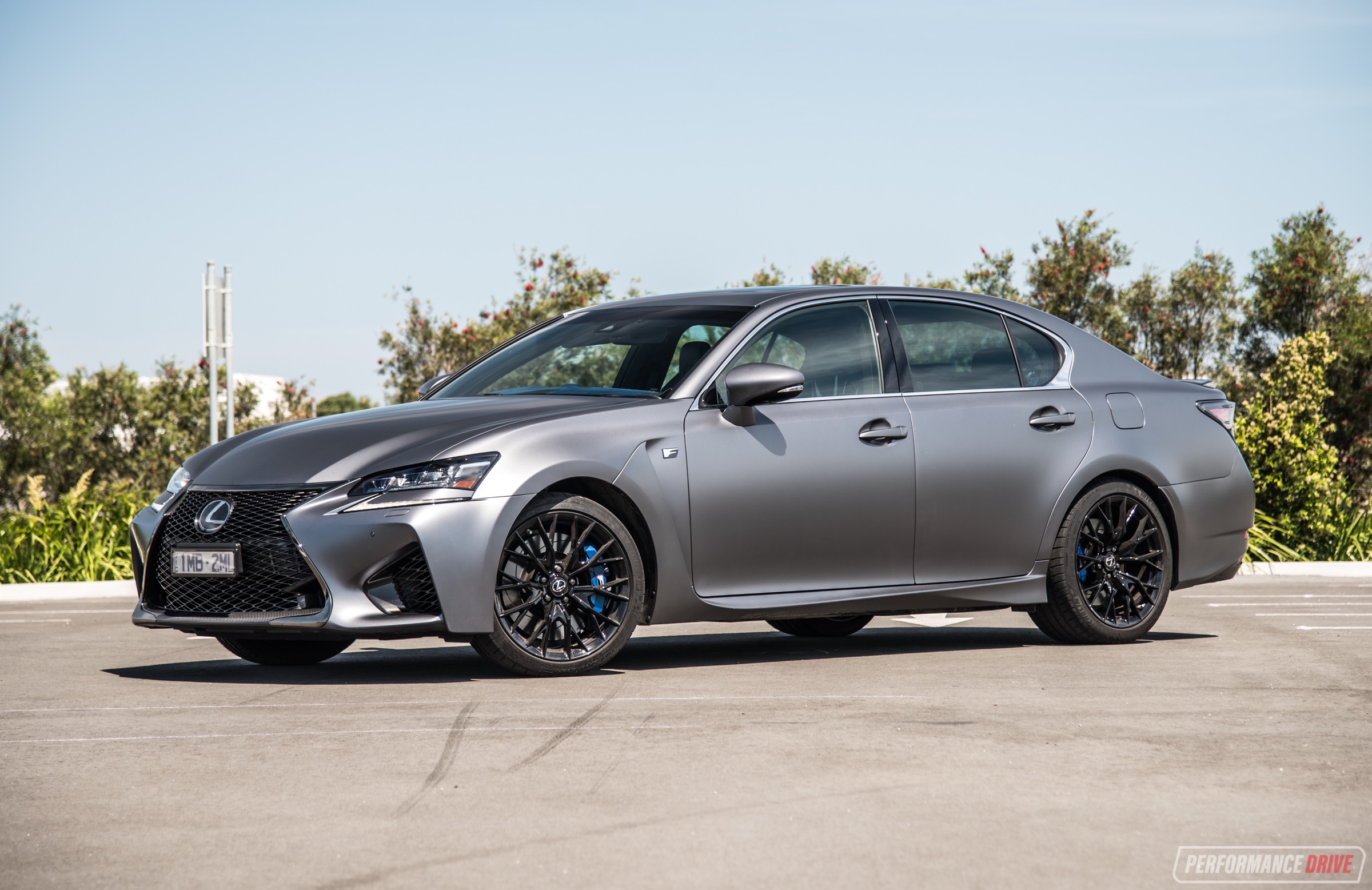 Every now and then Lexus brings out its bad boy side, such as with the LFA supercar, the original IS F, and now this, the GS F 10th Anniversary Edition. It was designed to help celebrate the 10th anniversary of Lexus’s F brand, since the initial introduction of our old friend the IS F back in 2008. 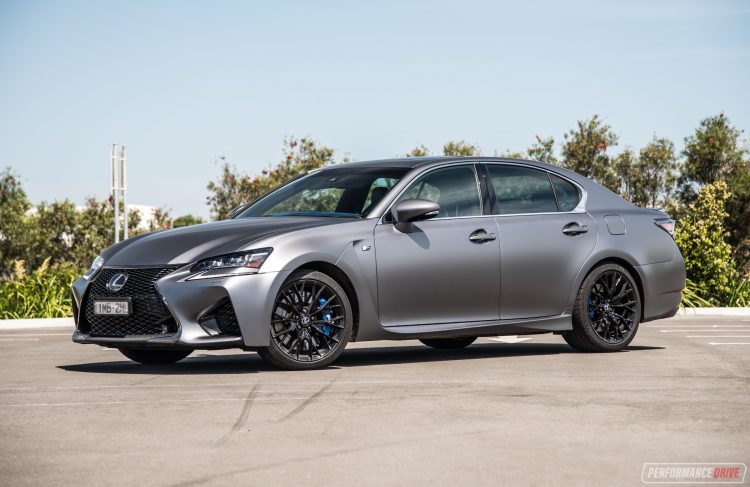 You might remember the RC F 10th Anniversary Edition we reviewed a few weeks ago. Well, this is essentially the same thing only it’s based on the GS F sedan. Obviously the main highlight is the sinister matt grey paintwork, called Fuji Graphite. This colour is exclusive to the special edition and not available on the regular GS F or GS.

Only a limited number are available, and prices start at $155,940 (excluding on-road costs). That’s about three grand more than the regular GS F, which is not bad considering the bespoke paint would probably cost more than that if a customer wanted to have their regular GS F sprayed in a similar colour. 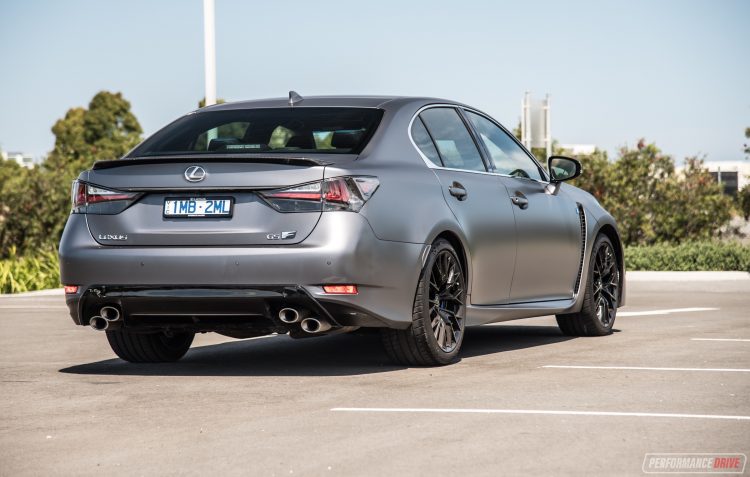 Open the front door and you’ll be flooded by the vivid blue semi-aniline leather that adorns the seats, with matching blue seatbelts and Alcantara trimming for the dash and instrument binnacle. There’s also some cool blue carbon fibre garnishes around the centre console and door trims, and some blue stitching front and rear. Blue leather is obviously not going to suit everyone’s taste, but we think Lexus hasn’t overdone it (much), as the rear bench is wrapped in the usual black leather, helping to provide some balance.

The GS is a large car so there’s no worries about legroom or headroom in the front or rear. You get a good sense of freedom, with big windows and an ergonomic driving position. All switchgear is ideally-positioned for reach, and there’s no real distractions in regards to pieces of structure. Actually, the blue Alcantara and alley key screws atop the dash can attract your view. Electric steering column adjustment is standard, as are power front seats. These chairs are really comfy, even for long distances, and they pack heating and cooling functions through the perforated leather. 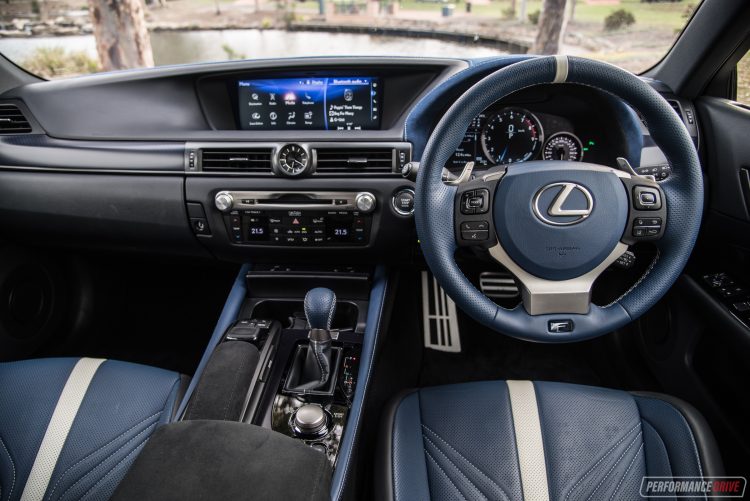 Being a product of Lexus, the build quality is flawless. Every fixture is firmly secured, with no rattles or annoying shaky bits to be heard or seen. Even the leather feels ultra-soft and of very high quality, with black Alcantara for the rest points, including on the centre console box and door arm rests for that club sport feel. About the only area that does feel slightly uneventful is the general interior design. While rival carmakers are keeping on top of this area with fresh and futuristic themes for the dash and instrument cluster, the GS’s decor remains mostly unchanged from when this fourth-generation was released in 2011-2012.

Take the climate vents, for example. Some of the European car brands present elegant or sophisticated designs for these. Whereas in the GS they are just basic rectangular items with the typical horizontal fins. There is a massive 12.3-inch LCD screen for the main media interface, which does stand out. The graphics are crisp with some cool background tones. However, we’re still not completely convinced on the fiddly hand controller ‘mouse’ system on the centre console. We’re sure that, after extended use, you would get used to it. But for us it just seems overly complicated for its intended purpose. It can also be a bit distracting if you’re attempting to make selections for the first time while driving the car. 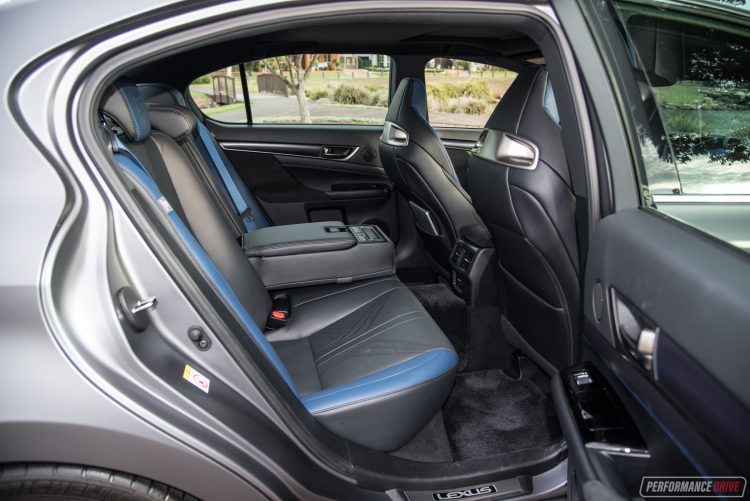 Overall, nobody is going to mistake this for a regular, business-suit-wearing luxury sedan. The blue definitely helps to create an exclusive environment inside, making it feel like something special, while the matt grey paint places it nearer to the aftermarket/underground world than the executive scene. Is the paint difficult to maintain? Not really. You obviously shouldn’t polish it, and like normal paint you should try to remove bird dirt as quickly as possible. Other than that, treat it like normal paint. This test vehicle actually has a clear wrap over the entire body, which is a great idea. You can’t really do this with normal paint as the clear wrap is never going to present the nice glossy shine of conventional coloured paint.

We love the GS F mostly for its engine. The ‘2UR-GSE’ 5.0-litre V8 doesn’t feature turbochargers or a supercharger. This is horsepower in its rawest form. Well, actually, it’s not that simple. Pulling apart the innards will reveal titanium valves and forged conrods, and heads development by Yamaha. Toyota utilised its partnerships in motorsport and Formula 1 in developing this engine. And with a compression ratio of 12.3:1 and a redline of over 7100rpm, the sound of it certainly shares some similarities with what you might hear in motorsport.

It’s a throaty, beefy note lower down in the revs before it turns into an all-out roar and scream as its climbs to the redline. There is an active sound enhancer (called Active Sound Control, ASC) which introduces additional inspiring volume through speakers inside the cabin. But, fortunately, this can be deactivated at the touch of a button. There are many carmakers that adopt these fake sound enhancer systems but this is one of the only systems which you can easily switch off. Thank you, Lexus – although, we don’t see why you thought there was a need for it in the first place. 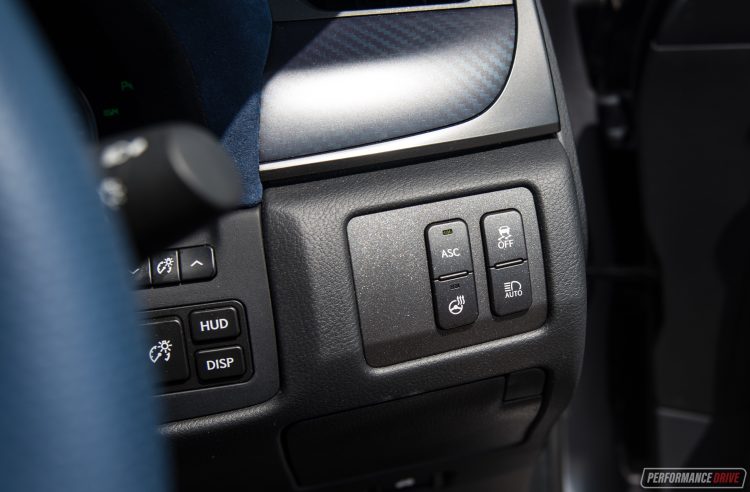 The AA80E eight-speed auto (started life as the world’s first eight-speed) is developed for Toyota by Aisin-Warner (Toyota owns 30% of Aisin). It is a very quick-changing unit, but not quite as quick at shifting gears as the newer 10-speed auto matched up with this engine in the LC 500. Off the line it tends to take long strides as it gets up to speed too, with a long first gear resulting in a less-than-neck-snapping 0-100km/h sprint. While some rivals can do the run well within the 4.0-second bracket, we couldn’t achieve anything quicker than 5.05 during our tests using a Racelogic Vbox Sport.

This engine loves to rev. In fact, peak power is achieved at 7100rpm. So, once you’re off the line and playing around with the paddle shifters in a high-tempo situation, such as up in the mountains, it feels like a car that does the 0-100km/h sprint in the 4.0-second range. Pull the left paddle shifter and it will automatically blip the throttle, producing a deep, baritone bark as it slots home a lower hear. And then you can apply the power as needed and keep the revs high for a very exciting drive. The sound alone will send goosebumps down your spine and a grin across your face.

In terms of handling, the GS F has always been a superbly balance and highly capable steer. It offers heaps of surefooted grip, too. Unlike other rear-wheel drive sports sedans, the GS F can be enjoyed by all driver skill levels. Even if you nail the throttle at the most inappropriate point of the cornering line, the GS F won’t necessarily kick you sideways and into a ditch. If you want to do that sort of stuff you need to coax it and let it know what you’re intending; throw the weight around, tip in the front end, unweight the rear slightly, and then use the high-revving V8 to poke out the tail for a smokey drift. Easy. 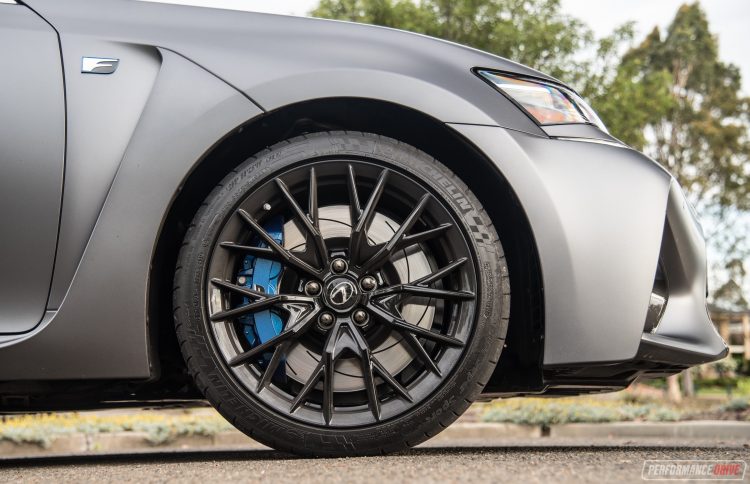 There’s a nice brake pedal feel coming into corners, allowing you to modulate the weight shift and speed with ease. They bite hard as well thanks to face-distorting six-piston front and four-piston calipers supplied by Brembo. They clamp 380mm front and 345mm rear discs. The aluminium monoblock clampers are painted in ‘Competition Blue’ for this special edition, as opposed to orange in the regular GS F. No performance enhancements are made in this area over the regular model.

During this test we drove up the coast for a few hours to see what the grand touring ability is like. As mentioned, the seats are very comfortable and there’s plenty of cabin space. Fatigue is a distant threat, especially listening to the brilliant 17-speaker Mark Levinson stereo. Surprisingly though, we saw a fuel economy average drop to around 9.7L/100km during highway use. This is very impressive for an ‘old school’ naturally aspirated V8. The engine doesn’t even incorporate cylinder-deactivation technology or stop-start, but it does use a clever direct and port injection system. For the entire week, including performance tests, the trip computer gave us an average consumption reading of 10.5L/100km – below the official average of 11.3L/100km. 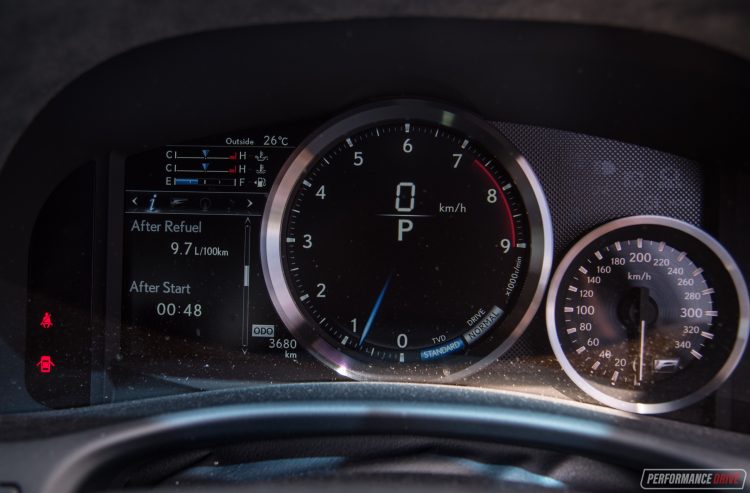 We love the horizon-hauling brute of this V8, and the sensational noise it makes. When you pair that with confident yet playful handling, and a responsive eight-speed auto, you’re left with a rewarding driver’s package. Put all of its performance credentials aside and you still have a very luxurious and comfortable premium large sedan. In this 10th Anniversary Edition specification, with the matt paint and black wheels, we think it’s one of the coolest Lexus models ever made.

CONS:
– Overwhelmingly blue inside?
– A bit slow off the mark compared with the latest rivals
– Some design traits showing age, especially inside