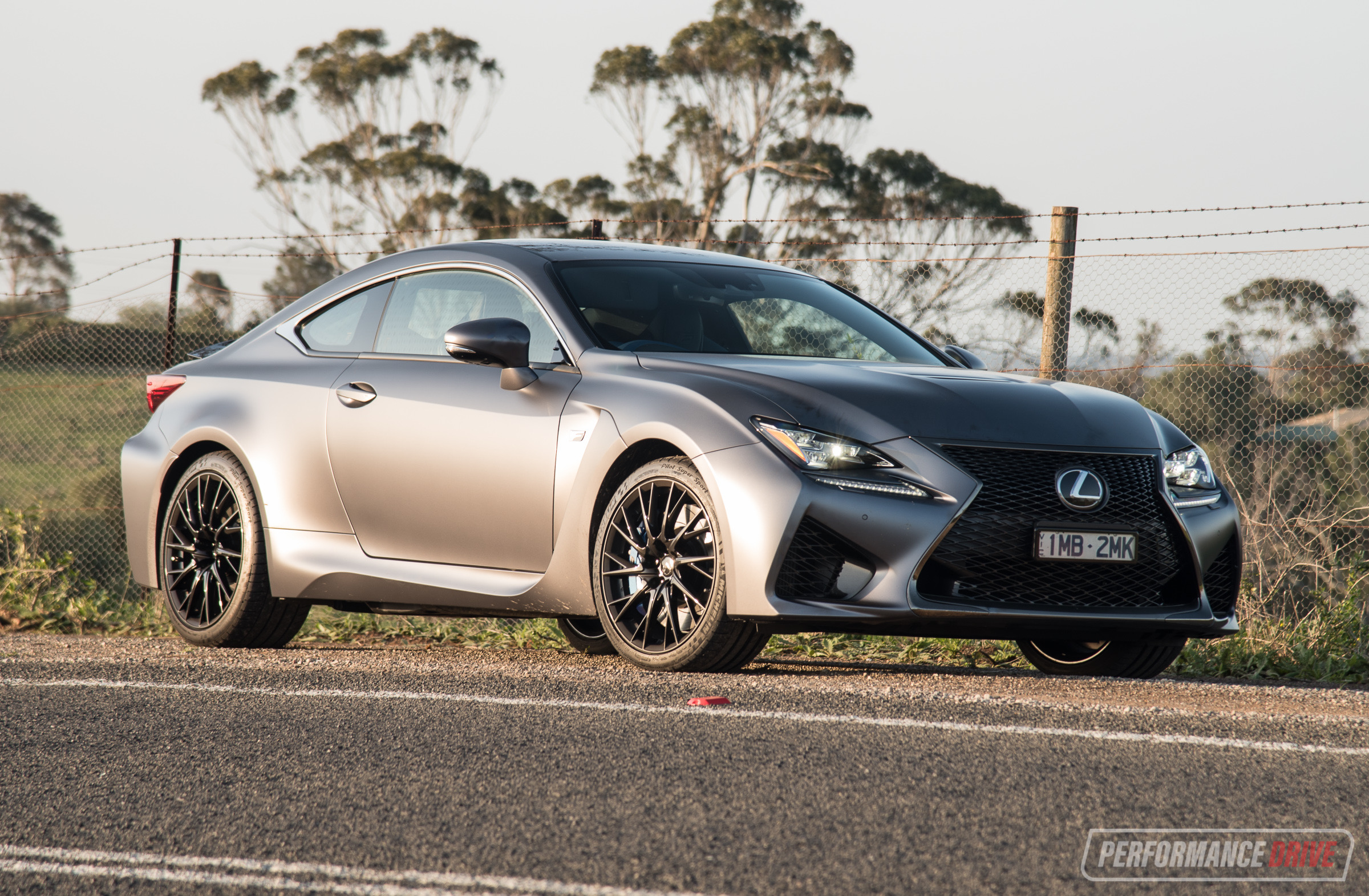 In a world of turbochargers, smaller-capacity engines, hybrid-electric, and fully electric cars, it’s actually refreshing – especially for those who appreciate the finer things in life – to see at least one mainstream carmaker is continuing to offer a raw, high-revving, naturally aspirated V8. We don’t like our chances, but of all combustion engine styles, we hope the aspirated V8 stays with us for the longest. 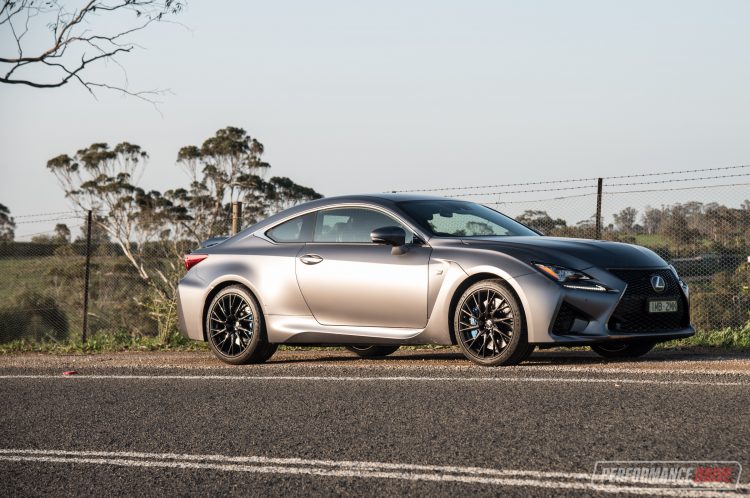 Despite its push for hybrid powertrains, Lexus, of all unlikely companies, still offers that classic, quintessential V8 recipe in the RC F, GS F, and the spectacular LC 500. The engine that powers all three of these cars – and similar to the engine in the old IS F – is one of our favourite production engines of all time. It’s unadulterated, full-bodied, crisp, and, above all, it’s capable of putting a big smile on your face.

Before we dive too deeply into the powertrain though let’s talk a bit more about what this, the 10th Anniversary Edition, is all about. This is a special edition that’s on sale for a limited time only. It was designed to help celebrate the 10th anniversary of the Lexus F sub-brand – since the launch of awesome IS F in 2008. Prices start at $151,929, or about $14,200 pricier than the regular RC F (excluding on-road costs). 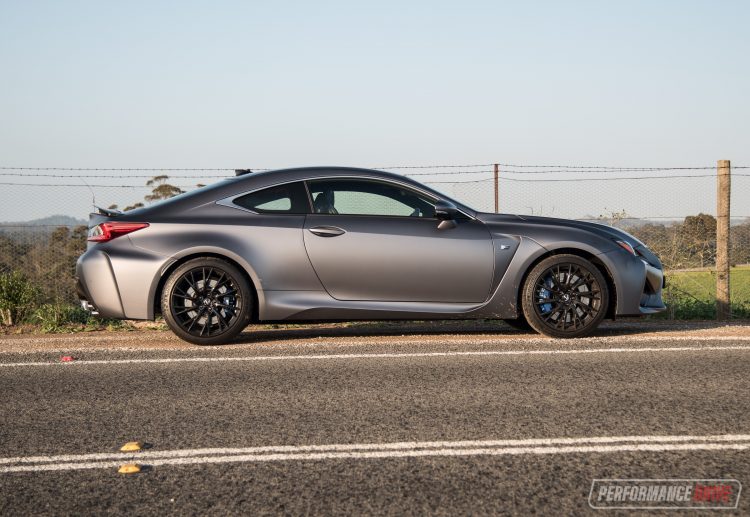 Firstly, you’ll probably notice the seductively sinister matt grey exterior, exclusive to the 10th Anniversary Edition. This ‘Fuji Graphite’ coat is contrasted perfectly with a set of bespoke 19-inch, 20-spoke alloy wheels painted in black. And then behind these are some slotted brake rotors clamped by six-piston front and four-piston rear calipers that are painted in a special ‘competition blue’. These, we feel, really help to give the RC F a cool street look, as opposed to the typical red-painted brakes on cars of this caliber.

Open the door and it won’t take you long to spot the difference between this and the regular RC F. The interior is blue. Blue leather is used for the seats, door trims, centre console and parts of the dash, with black sections to provide some contrast. Black Alcantara is also applied to the centre console box for that soft sensual feel, with blue carbon fibre for sections of the door trims. The attention to detail is pretty insane, right down to the blue and white stitching for the leather gear lever boot and steering wheel. 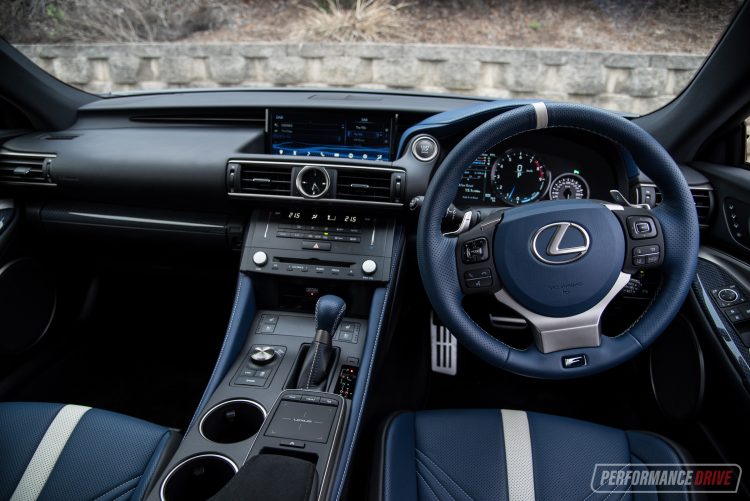 Lexus first introduced the RC back in 2014. The dash design is starting to age just that little bit in our opinion. It’s mainly due to the number of buttons and controls we think, as more modern cars are starting to cut back on buttons and instead incorporate as much as possible into the on-board media screen. This isn’t necessarily a bad thing for the Lexus. Sometimes you want to be able to make a selection without getting lost in a maze of virtual menus. We love the proper volume knob and its hydraulic-like feel, and the existence of an air-con on/off button right there on the dash.

Having the climate control presented on its own panel also has its benefits as you can quickly adjust the fan speed and so on. But Lexus was thinking ahead when it launched the RC as the dual-zone temperature is controlled via a cool swipe function. You simple slide you finger up or down the temperature line, or you can repeatedly press the top or bottom like a traditional plus/minus operation. Another element that does seem to have past its age is the matt-like black surface that surrounds the console controls, as well as the traditional textured plastic used for parts of the dash. 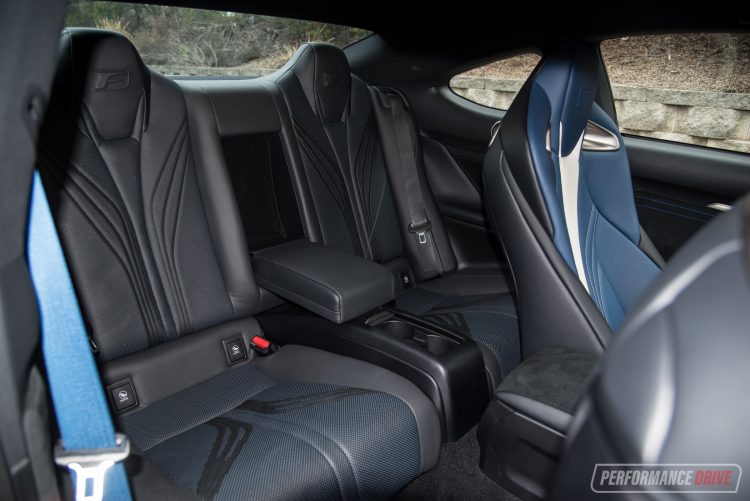 Down below on the centre console you’ll find the infamous touch pad system. It works a bit like mouse system on a computer. But, can you imagine using a mouse while driving? Well, that’s pretty much what it’s like using the touch pad. You need to spend some time getting used to it, that’s for sure. Making precise selections, such as changing the radio station to just one tile across, can be very fiddly and you often over-shoot and the cursor goes too far. We think Lexus has come up with this system as a way of showing off its technical know-how. However, it’s just not as practical to operate in the real world as some of the rival systems.

The driving position is pretty much perfect, with a fully-adjustable electric steering column and power seats. You can go for a hunkered-down racing position or raise the seat for a more commanding view. Keep in mind though this is a sports car, and it does require bending right down to get in and then leg-pressing your way back up to get out. You won’t find anything much more practical in this class, though. Fortunately, the door opening is very wide and ‘comfort access’ comes as standard (automatically retracting steering column and slide-back seat). There is some rear seat space to be had as well, so long as the front seats aren’t slid all the way back.

Boot space is rated at 366L, which is down from 423L in the non-V8 RC models. It goes in deep but it is quite shallow in terms of vertical depth. 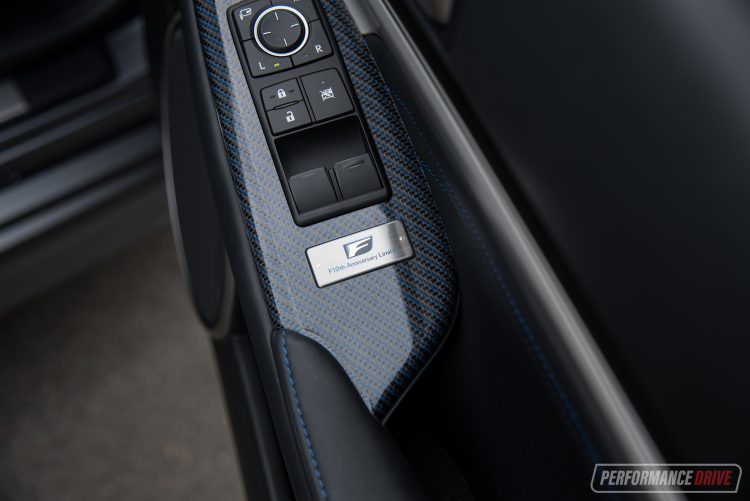 Yes, we know. The are some six-cylinder engines that make just as much power as this. And yes, there are twin-turbo V8 engines in this market space that have enough torque to twist the Earth out of rotation. But. In the real world, sometimes you just want to have a laugh and not be so serious all the time.

The V8 engine powering the RC F is one that anyone can enjoy. You can flatten the throttle at low revs and it will progressively build power and torque. It won’t hit you with an instant tidal wave of grunt that immediately overcomes the rear tyres, spitting you off into an embankment. That’s not to say there isn’t enough power to turn the tyres. Because there is. It just needs to be revved, like a traditional engine. 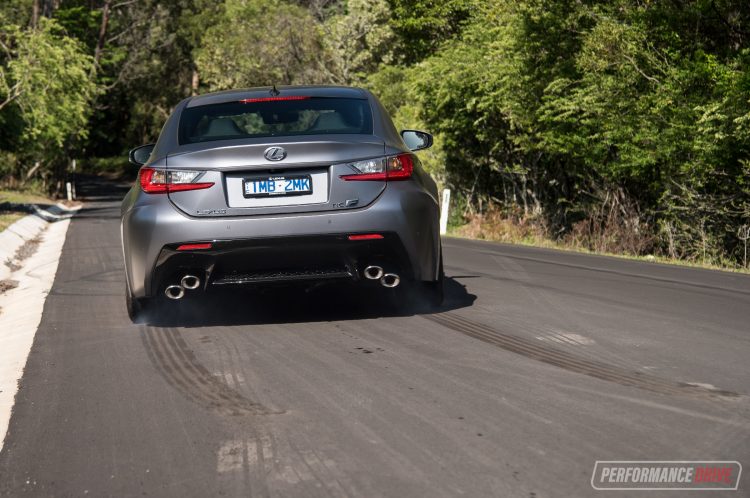 For the upgrade to the new 2UR-GSE engine from the older IS F version, one of the main things Lexus engineers did was turn up the redline. As we all know, with more revs comes more power. The redline is now 7300rpm, up from 6800rpm. The compression ratio is also higher, at 12.3:1 from 11.4:1. And D-4S fuel injection is added in, incorporating both port and direct injection. It also features some exotic stuff like titanium valves, cylinder heads flowed by Yamaha, dual-length intake runners that provide a deep induction growl, and dual VVTi variable valve timing.

It’s a masterpiece of an engine, really. At 7100rpm it develops 351kW. And between 4800-5600rpm it generates 530Nm. For an engine that isn’t boosted by turbochargers or a supercharger, these are some impressive figures. It’s 70kW/L. Anything above 100kW/L is usually outstanding, but often cheating with forced induction. The way this thing hammers its way up the rev range, and the noise it produces while doing that, it sends goosebumps up your spine. You can’t get enough of it. 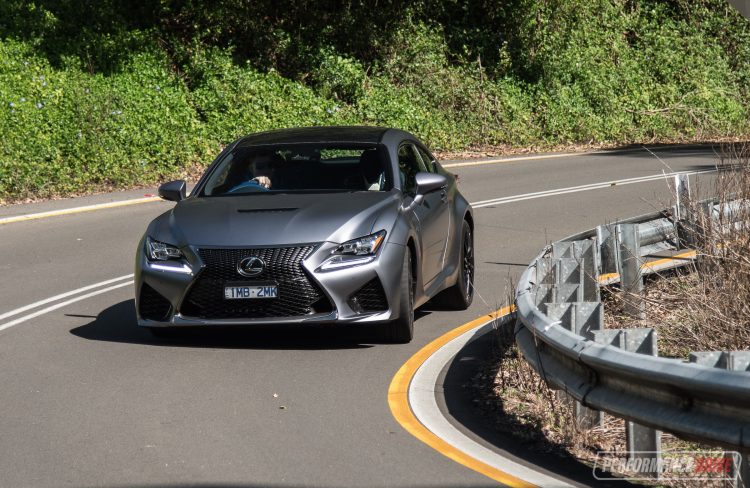 Matched up to the engine is the Toyota ‘AA80E’ eight-speed automatic transmission built by Aisin (a transmission specialist that’s owned 30 per cent by Toyota). It’s a great gearbox, changing up and down gears promptly and on demand with no hesitation. Downshifts are supported by an abrupt rev-match system when you have it in Sport Plus mode, or it can behave as a smooth, luxurious gear shift if you leave it in normal mode. About our only complaint with the transmission is that first gear can sometimes seem a bit long.

Off the mark the best 0-100km/h we could achieve was 4.91 seconds. This is very quick, don’t get us wrong. But we feel like it could be quicker with a punchier first gear ratio. Some kind of rev-holding launch control might also produce a quicker time. But this is just nitpicking and isn’t going to be an issue in the practical world.

Around corners the RC F is extremely smooth and fluid, with a nice weighty steering feel providing a distinct sense of confidence and solidity. Aside from going flat out through the bends, you can find lots of pleasure in simply touring around a nice country road in this. The ride is complaint and very comfortable, and there is virtually no body roll at all. Give one of the paddle shifters a few clicks here and there, and stretch its legs, and you’ll find it is a very enjoyable machine. 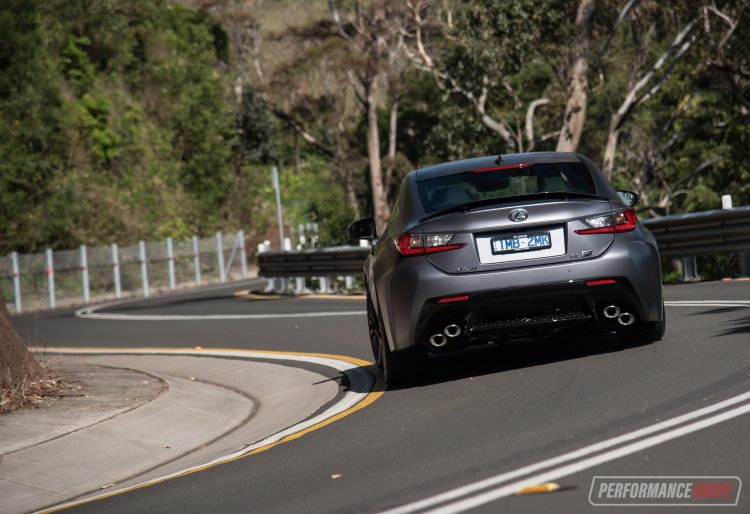 Turn up the pace to level 11 and the RC F can feel a little overwhelmed. It is a heavy car, weighing in at 1820kg. You can feel it when you’re driving in this ten-tenths tempo. There’s a little bit of understeer if you don’t get the weight shift right, and the rear end, while mostly planted, can feel a little disconnect from the front end. Again though, this is only when you’re driving like you’re racing. And that’s not really what Lexus is about anyway.

What we like most about the driving experience of the RC F is definitely the engine and its sound, as well as the brilliant ride quality (especially for a sports car), and the solid and reassuring steering feel; it glides around corners. Despite all this it is still unquestionably a classy and relaxing luxury car, with all of the mod-cons inside and plenty of high-tech gadgetry.

Lexus is primarily a maker of luxury cars. And in that department you will be truly satisfied with what’s presented here. Coinciding with this is the build quality. You won’t hear one creak or rattle in the cabin. Nothing. All you hear is the engine cleanly burbling and purring along. Then you have the stealthy and angular styling, with the matt grey paint and dark wheels of this special edition. Sometimes matt grey cars just look cheap. But we think the RC F really suits this colour as the soft tone seems to contrast well with the sharp styling cues and details.

If you want to take down lap records, yes, you will be better off in one of the competitors. But as a whole vehicle to drive and live with, every day of the week, the RC F is a beautifully refined automobile.

Yep, once again, it looks like V8 BMW power could soon be coming to a Jaguar Land Rover product near...

British supercar manufacturer McLaren has lifted the curtain on its most powerful convertible yet, the 765LT Spider. It packs the...

SSC, the manufacturer of some of the fastest cars on the planet, have caved to pressure and conceded the fact...