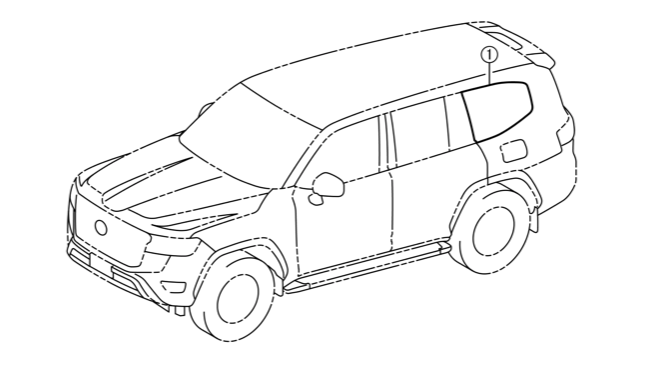 We’ve found some interesting patent images on the Australian IP database, and we think it could be the front bumper of the 2022 Toyota LandCruiser 300 Series. 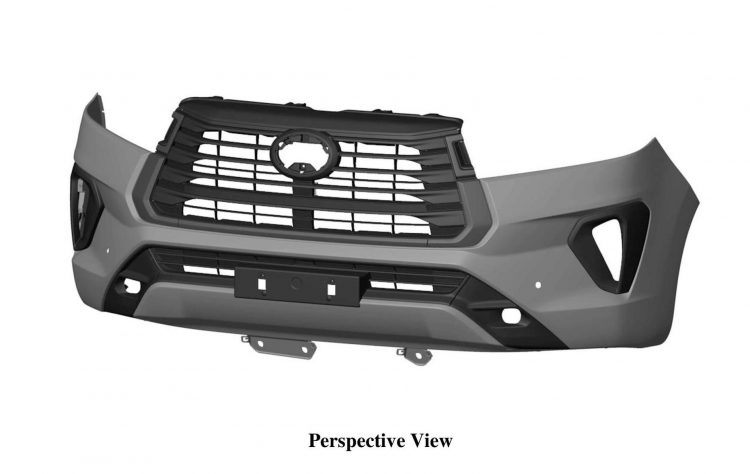 (Update at bottom of story. These patent images show the Toyota Innova and not the 300 Series)

Rumour has it the new model could be revealed some time later this month, with vehicles set to be on the road in June in some markets. So far we’ve seen some sneaky spy photos showing complete body-in-white examples sitting in an industrial yard, an apparent prototype driving along in Japan, and even a complete model in sheeting.

We’ve been keeping an eye on this patent filing for a few weeks now, around when it was lodged on March 3. It’s been listed as “not open for public inspection”, but this week it has become available. Interestingly, the design filing notes Adam Ty Dean Smith as one of the key designers. Dean Smith, from Australia, has previously created works for Ford Australia and HSV. 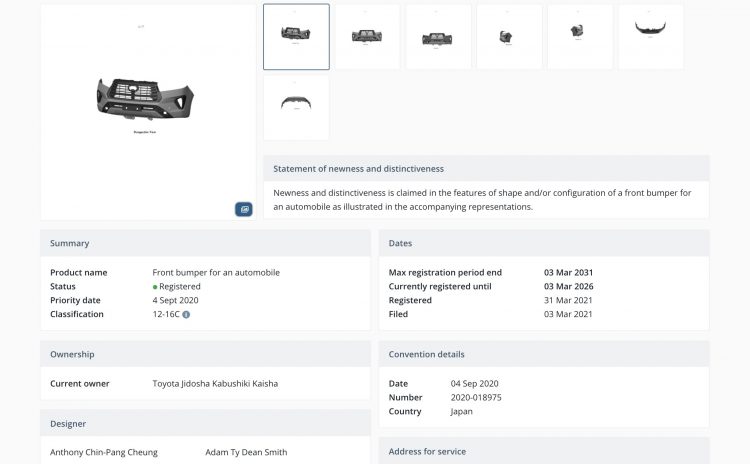 The patent images show an upright front bumper bar featuring a trapezoidal grille, with unique indents along the upper edge. We think these indents are where the central LED daytime running lights will meet.

There’s also a five-tier slat system in the middle, which is unlike any other current model in Toyota’s showroom. The HiLux has three, for example. As suggested by the spy images with the sheet over the body (further below), the bonnet is set to wrap right over and form an upper-edge mound. This is similar to the current 200 Series. 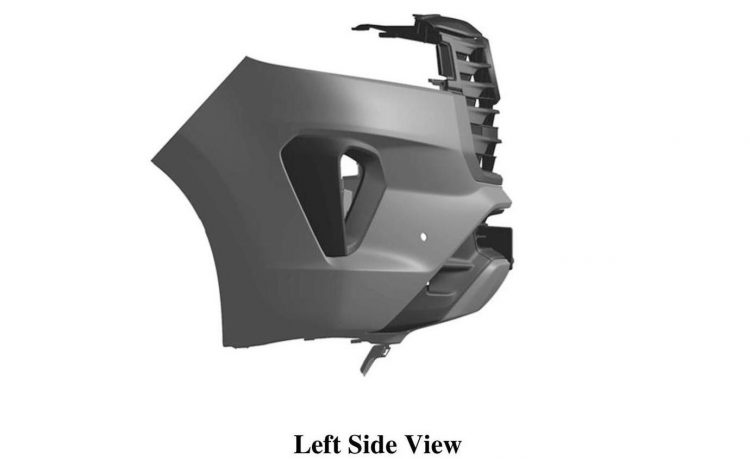 On the sides you’ll notice triangular clusters for the fog lights, while lower down an additional grille completes the company’s hexagonal styling philosophy. It looks like there are some extra holes in this trim piece, potentially for recovery points.

Again though, we could be wrong with all of this. It could be a front bumper bar of something completely different. We’ve had a good look around at various Toyota products though, including overseas models, but nothing seems to resemble this. With the debut expected later this month, it is perfect timing that these patent images are released for public viewing as well; we’ve noticed a similar timeframe in the past with other new vehicles. 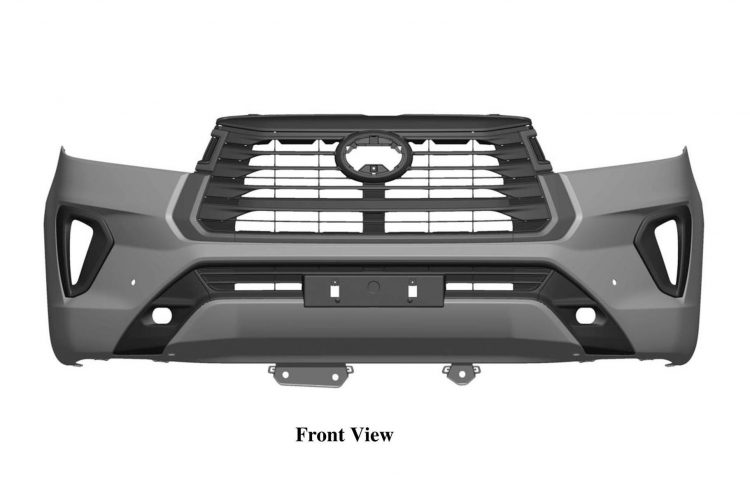 As for the 300 Series and any other info, nothing has been officially confirmed as yet. So far though most of the leaks and speculation points to a three-engine lineup, depending on market regions. A 3.5-litre twin-turbo ‘V35A-FTS’ petrol V6, producing around 310kW/600Nm, is set to be the main option, connected to a 10-speed auto.

This engine, also known as the AJA0F, is set to offer a fuel consumption average of around 10.1L/100km. That’s a bit more than the 9.5L/100km rating in the Lexus LS 500 which uses the same engine, however, the big LC is obviously less aerodynamic and is likely to retain a full-time four-wheel drive system. 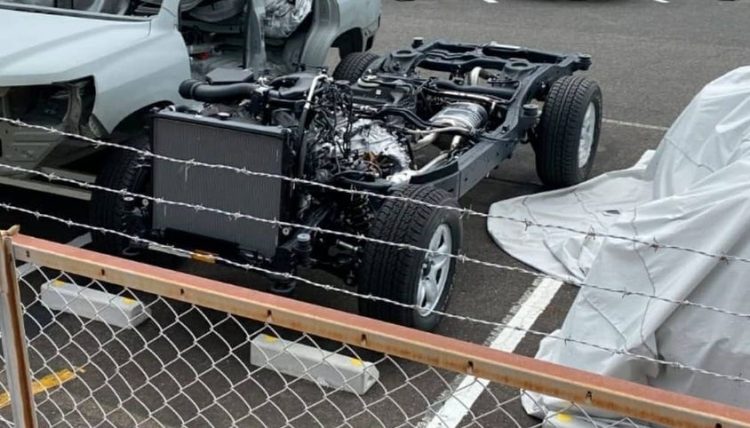 A 4.0-litre petrol V6 is also on the cards, especially as we saw the chassis and powertrain just sitting in a yard featuring what looked to be the 1GR-FE. According to forums, this engine will offer a fuel consumption average of around 9.4L/100km.

For the diesel lovers, a new 3.3-litre turbo-diesel unit is also on the way. Details on this are still a bit hazy, as we’ve heard everything from it being a Mazda-Toyota inline-six co-development project, to it being a four-cylinder, and a V6. A leaked image, supposedly of a production model, has shown a V6 badge, but that could relate to the 1GR. 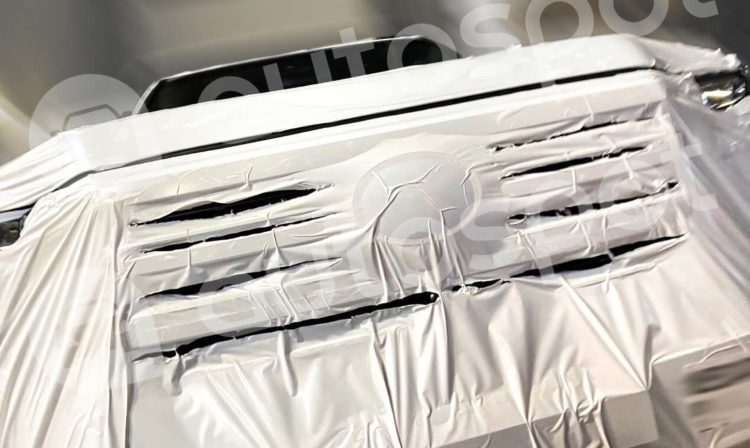 In other areas, there’s been talk of a rear differential lock being fitted to most variants, while some are set to welcome a front diff lock as well. It’s also understood Toyota will switch to a six-stud wheel pattern, like the Tacoma pickup sold in the USA and the upcoming 2022 Tundra. That does seem likely as the 300 Series is set to share the new Tundra’s platform.

We might not have to wait long before all the details are revealed and confirmed, so we can finally stop speculating. Toyota will probably send out some teasers in the lead up to the debut as well, especially as it is turning out to be one of the most hotly-anticipated models of the year.

UPDATE: As a reader has pointed out in the comments section below, the bumper bar design is from the latest Toyota Innova. The Innova is an MPV sold in select markets only, based on the same platform that underpins the HiLux and Fortuner.

UPDATE 2: A design sketch has surfaced online, showing a diagram-style profile of the body design (below). It shows a different front end to this story’s original patent images, obviously, and it confirms the twin-bump bonnet will carry over from the current 200 Series.