As previously confirmed, Lamborghini is announcing a Lamborghini Gallardo LP550-2 Spyder and has unveiled the new model at the 2011 Los Angeles Auto Show. 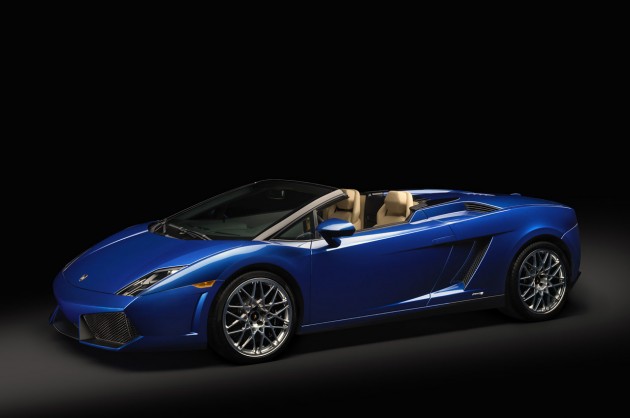 Unfortunately, the Spyder doesn’t get the stripes because it’s not a tribute to the company’s former chief test driver. Instead, the Lamborghini Gallardo LP550-2 Spyder is simply one of the last editions of the Gallardo before the new model comes into play some time in 2013/2014.

It still features the Balboni rear-wheel drive layout though, and a 5.2-litre V10 engine developing 405kW of power. This makes it the most powerful rear-drive production Lamborghini convertible in history.

Despite the rear-wheel drive system shedding some weight from the Gallardo, the Spyder has needed some strengthening in the chassis, as per normal convertible production cars due to the lack of a roof.

Overall weight sits at 1520kg. Compared with the Balboni coupe which weighs 1380kg, the Spyder is, understandably, not quite as quick. Lamborghini says the Spyder will crack 0-100km/h in 4.2 seconds though (compared to 3.9 of the coupe), which is not exactly hanging about.

With the mechanical changes to the driveline, the LP550-2 Spyder also gets revised suspension settings to get the best out of the Gallardo’s great chassis and steering.

The Lamborghini Gallardo LP550-2 Spyder is set to hit the market in 2012. Stay tuned for Australian pricing and launch dates.