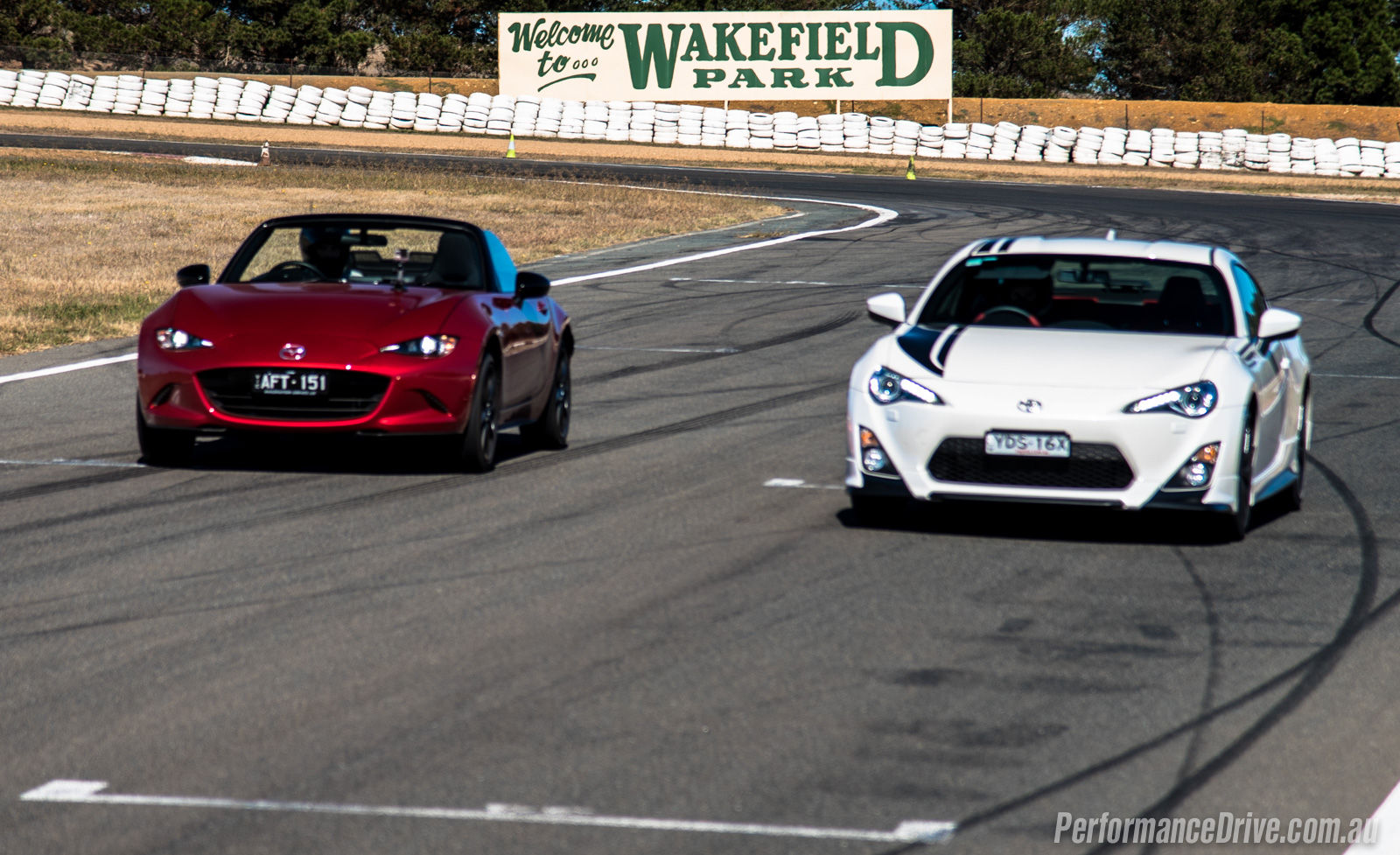 The sports car market hasn’t been this hot since the days of the turbo fenzy in the crazy eighties. It’s the brilliant 2016 Mazda MX-5 2L versus the now legendary Toyota 86. These are the only proper rear-wheel drive sports cars you can buy for under $40k. 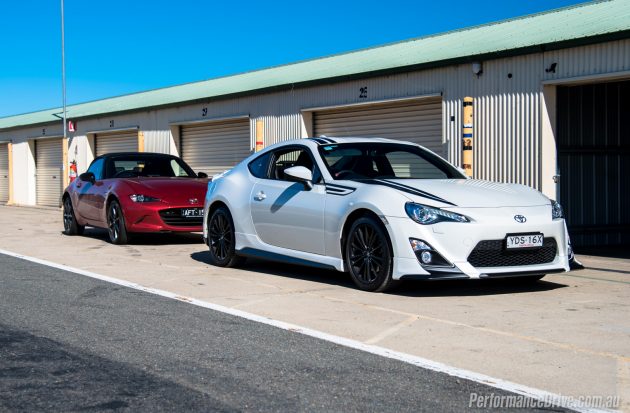 It’s not really a matter of should you buy one, as both are hugely respected by experts and driving fans the world over. No, we’re here to find out if they can be separated. Can one possibly be ‘better’ than the other? We’ll let that sit with you for a moment and give you a chance to try and decide which one you would take. It’s hard isn’t it?

We’ve tried to make this as fair as possible so we’ve got the 2.0-litre MX-5, although not in the top GT spec trim, and the GTS version of the Toyota. Toyota Australia gave us the TRD Blackline edition. Fortunately, for the sake of this comparison, the TRD kit only adds cosmetic enhancements and doesn’t alter the driving character or any of the major components compared with the regular GTS on which it is based. Prices start at $34,490 for this base MX-5 with the 2.0L engine and manual transmission, and start at $35,990 for the GTS manual (TRD Blackline pack adds $2000). 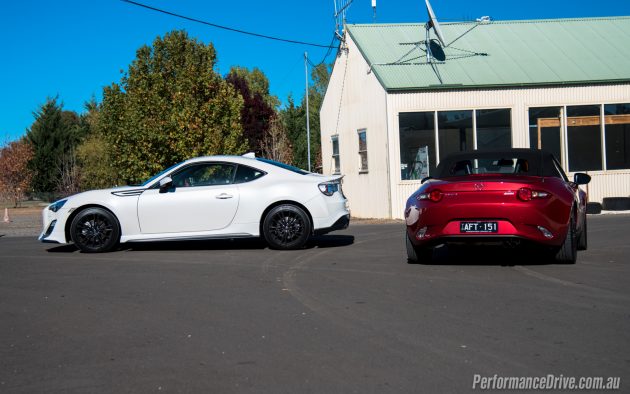 It’s very difficult to separate these two in terms of specs. On the one hand the Toyota 86 and its 2.0-litre Subaru engine, naturally aspirated, like the MX-5, produces 147kW. Meanwhile, the MX-5 2.0-litre inline four generates just 118kW. However, thanks to the extreme lightness of the MX-5, 1005kg versus 1216kg (tare), the power-to-weight ratios are as close as they come. The Toyota has to move 8.27kg with every individual kilowatt (8.27kg:1kW), while the Mazda has to push slightly more, with every kilowatt heaving 8.51kg (8.51kg:1kW).

Even though the Toyota defeats the Mazda for power-to-weight, just, it’s the Mazda that is quickest along the tarmac in a straight line. After numerous tests using our VBox, the best 0-100km/h we achieved in the Mazda was 6.94 seconds versus 7.46 in the Toyota. A similar story unfolded across the quarter mile, with the Mazda recording a best of 15.08 seconds while the Toyota managed 15.56 seconds. Interestingly, the Toyota crosses the line a smidge faster, at 151.0km/h versus 150.8km/h in the MX-5 – we told you this was going to be a close one.

We suspect most of the reason the MX-5 is able to beat the 86 in terms of acceleration is because of the torque. Toyota has extracted 5Nm more from its naturally aspirated four, but bring weight back into the equation and it’s the Mazda that has to move fewer kilos with every individual Newton-metre; 5.0kg:1Nm versus 5.93kg:1Nm. This helps the Mazda to pull out from corners and even carry on in higher gears.

Out on Wakefield Park, thanks to one of GP EXEC’s private track days, the MX-5 recorded a slightly quicker best lap. We used two different drivers to extract the best result from each. And let me tell you, it wasn’t easy. Lots of sweat and a bit of frustration later, the Mazda stopped the clock with a best of 1:15.48 and the Toyota’s best was 1:15.76. Again, it proves how unbelievably close these two cars are.

So, if overall speed and acceleration is your number one priority then the decision is now resolved for you. This doesn’t provide an overall conclusion though. Let’s dive a bit deeper to try and uncover which one is the most enjoyable and the most engaging, and which one holds up the best even after countless punishing laps. 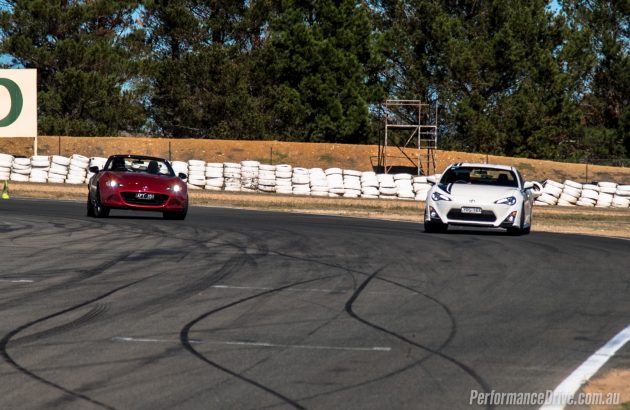 For the first assessment, we’d have to give this to the Mazda solely because you can flip down the roof. There’s nothing quite like propelling yourself around a track, or a mountain road for that matter, with the roof down and the wind in your hair. It is very exhilarating. Mazda engineers have worked hard to ensure none of the typical floppiness is felt, despite having no connecting roof to hold the entire structure together and stiff.

The Toyota 86 does have something else up its sleeve though; drifting. The 86 is much more controlled during a drift. It can hold a longer slide and hold a larger opposite lock angle. This can be partly attributed to the wheelbase which is approximately 200mm longer in the Toyota. In that sense, the MX-5 is more nimble but it can be fidgety. The front end is more eager to jump into corners and the electric steering is geared quicker. For the Toyota there’s also an electric power steering system, but it’s not as sensitive as the Mazda’s, and while you can still pinpoint the front tyres exactly where you want them, the rest of the body feels firmly etched into the fabric of the chassis. You only need to sneeze and the MX-5 will dart in another direction, with the body following fractionally later.

On the public roads where it is narrower the MX-5 is more favourable. It allows you to place the car precisely and it’s perfect for a tight winding mountain road. Out on the track, particular a big circuit like Wakefield Park where the road is wide, there is almost too much space for the tiny MX-5 to bounce around within the lane. Drifting is more difficult to maintain, especially at high speed. You need to concentrate harder and make sure you’re as smooth as possible with the steering. In the Toyota it’s pretty much a case of turn in, plant the throttle, leave it there, and just catch it all with opposite lock. And this action can be held until the cows come home, or until the corner finishes, whichever comes first. 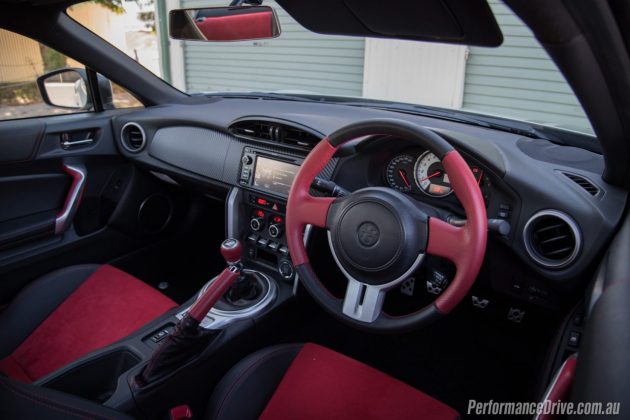 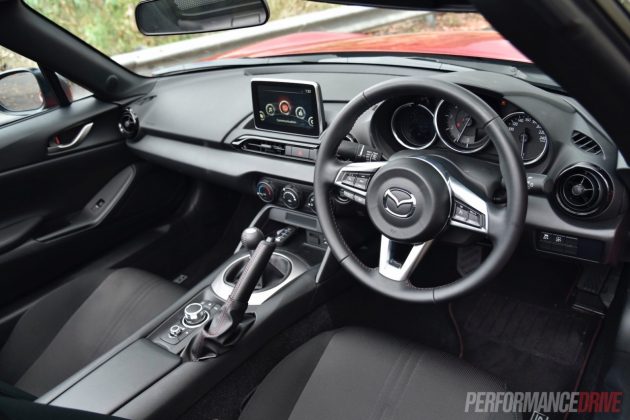 Mazda and Toyota are both very reputable carmakers, and both have a very good track record (pun not intended). We have no doubt these cars will outlast an owner, especially the Toyota. And we aren’t highlighting the Toyota just because it’s a Toyota. We mean in the sense that the fabric roof will inevitably be the first thing to go in the MX-5, like all convertibles.

On the circuit it was actually the MX-5 that held up the best, mechanically. The Toyota test car featured Michelin Pilot Sport tyres, which we ordinarily love. But on the Toyota they didn’t seem to be well matched to the car. Understeer was a problem when the tyres were only a few laps in, and they took around three to four laps before they properly warmed up. Even then, they screeched and skidded a lot, whereas the Bridgestones on the MX-5 tended to squirm and bite. This could be put down to the MX-5 weighing around 200kg less.

The lower weight also helped with braking. We’ve taken a Toyota 86 to the track in the past and the brakes held up well. After the sheer amount of testing we did with these cars to try and extract the best lap time (it’s a hard life, we know), the Toyota’s anchors started to fade and the pedal began to drop and harden. Whereas in the MX-5, they performed flawlessly the entire day. The low weight really helps in many areas.

As for fuel consumption, both cars used one complete tank of fuel on the day. This is excellent considering the accelerator pedal was depressed to the floor for most of the driving. If anything, the MX-5 used slightly less fuel. It’s worth noting the MX-5 is around 2L/100km better off when it comes to road driving. We’ve previously recorded around 6-7L/100km on average, while the Toyota uses around 7-9L/100km in the real world. 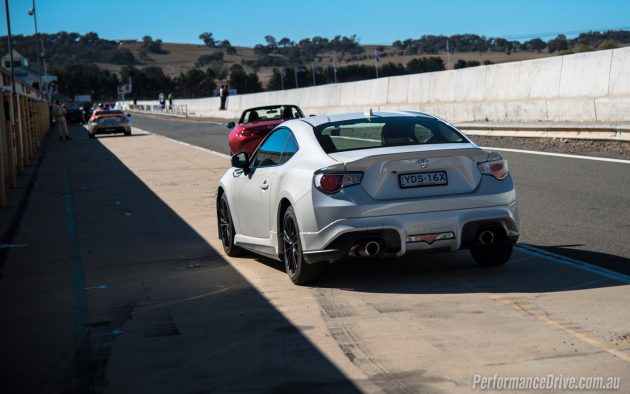 The big question. You really need to think about what you’re going to use the car for, specifically, for most of its life. Consider whether you need those pesky rear seats in the Toyota, although they can be used in emergencies or for children. The Toyota also has a bigger boot (217L vs 130L), and is probably going to be a bit safer in the event of a serious crash. ANCAP has scored the Toyota a five-star 34.4-out-of-37 rating while the Mazda hasn’t been tested (previous model rated 4 stars). Its tests don’t include a roll-over.

Instead of giving you a final word of advice, I’m just going to tell you what I would pick, on a personal level. It’s got to be the Toyota, but only because I would probably modify the hell out of it and/or maybe even race it. There are a few more options in the aftermarket world for the Toyota, particularly in Australia, and of course a WRX engine is just a quick conversion away. I completely understand why anyone would pick the MX-5 though. It brings pure enjoyment to all levels of drivers, and it offers a much more exciting Sunday-drive blast than the Toyota. It also sounds significantly better than the Toyota in our opinion.

Feel free to give us your thoughts below. And if you’re an owner of one, we (and others) would love to hear your ownership experience.

The separate Mazda MX-5 2L review and 0-100km/h video is found here, and the Toyota 86 TRD Blackline review and video is here.