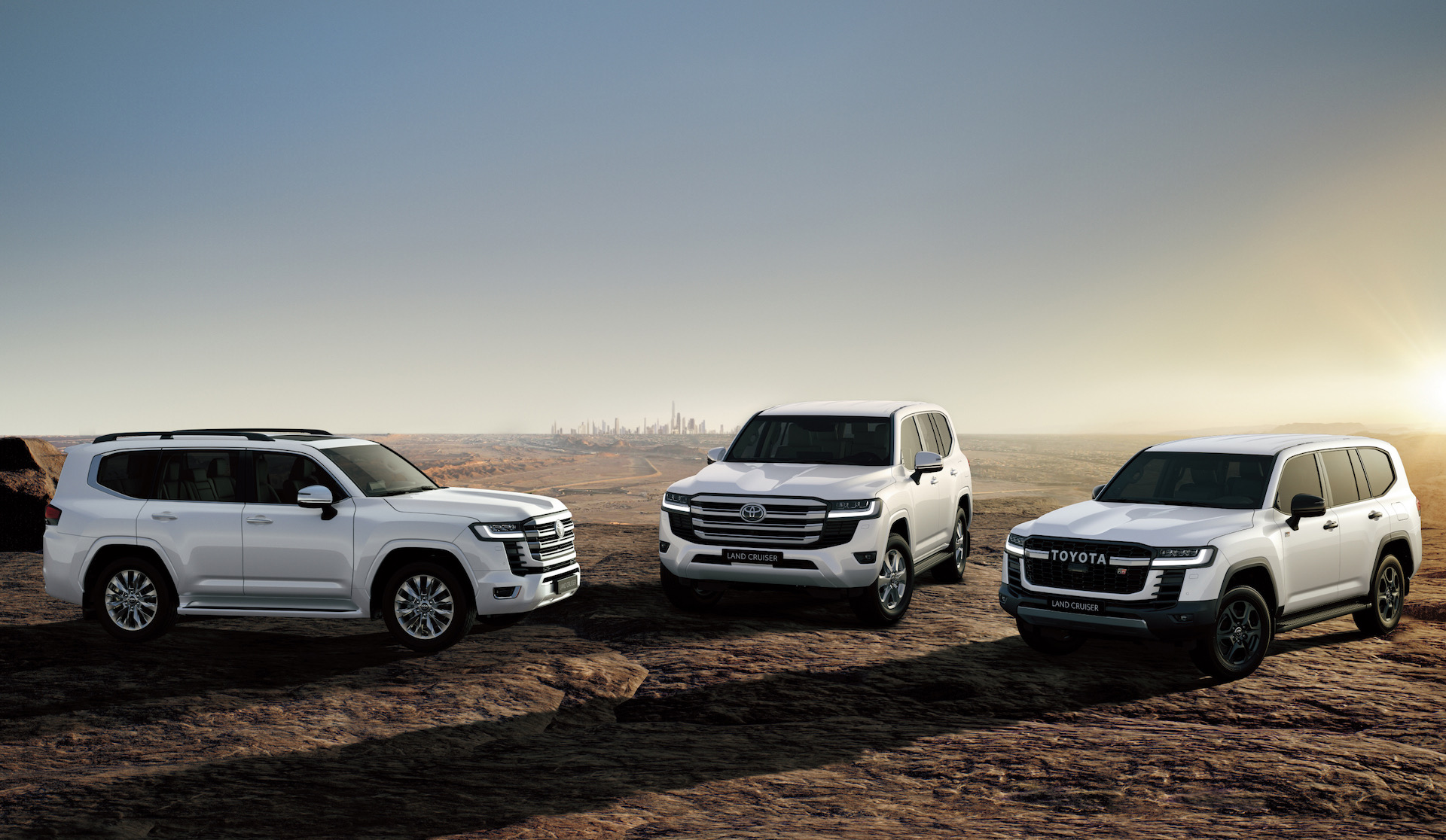 This is it. The all-new, 2022 Toyota LandCruiser 300 Series. It debuts with a fresh TNGA-based platform, including all-new suspension, and showcases new V6 diesel and twin-turbo V6 petrol engines. The 4.5-litre twin-turbo V8 diesel is dead. 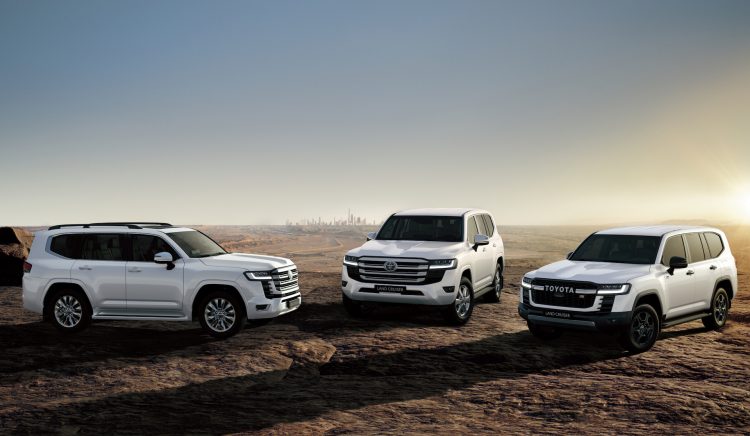 Of course, the 300 Series also shows off a brand new exterior and interior design. We’ve all already seen it thanks to spy photos, but the gist of it is a fresh face with slimmer headlights, a more dominate grille in the middle, and a double-bubble bonnet continuing from before.

Around at the back are some new taillights which, in our opinion, look like they are fitted upside-down, with a freshly-sculpted bumper bar. Perhaps most interesting is the launch of a new GR Sport variant, which brings in black highlights around the grille, side mirrors and side steps, and some sporty black alloy wheels. 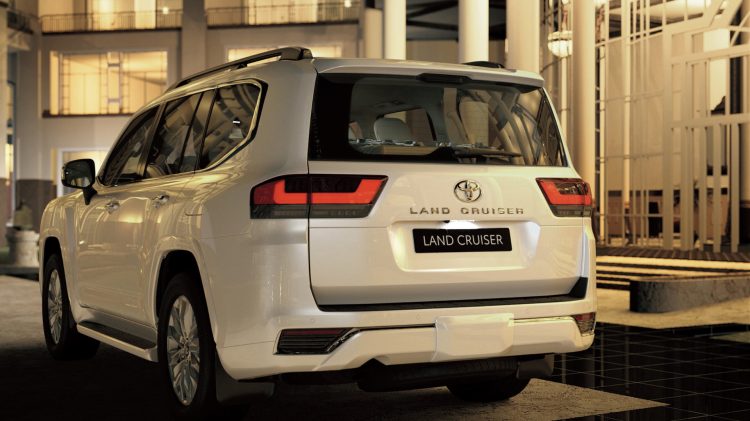 So, what about the hardware? Well, Toyota has implemented its latest TNGA-F platform, which is for heavy-duty trucks and SUVs. It supports new suspension (independent front, live axle rear) with improved wheel articulation for better off-road performance, as well as the debut of Toyota’s Electronic Kinetic Dynamic Suspension technology (E-KDSS).

Thanks to the new chassis, the centre of gravity is lower, with the engine mounted 70mm rearward and 28mm lower, while the total vehicle weight is reduced by up to 200kg (more than 100kg across the range) to improve performance, handling, and fuel economy. In other words, it’s all just better than before. 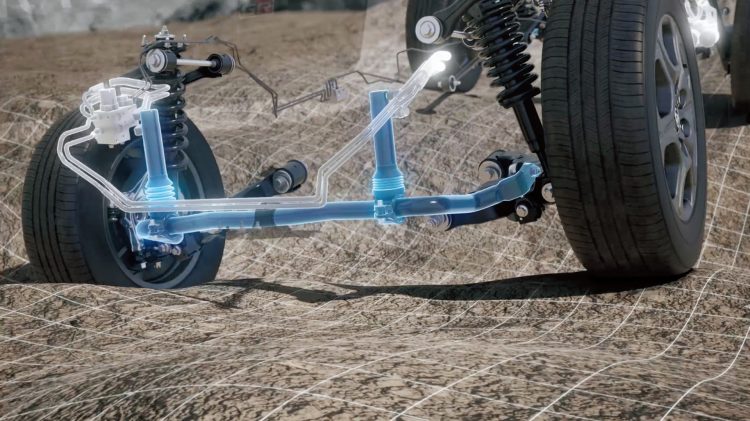 Drivers have the option to play around with Multi-Terrain Select with different driving modes, as well as low range, and there’s a new Multi-Terrain Monitor system which involves a digital display of the terrain ahead using an external camera (shown below) – similar to Land Rover/Range Rover.

If you were worried the 300 Series would go a bit soft, don’t be. In short, the new model promises big improvements to on-road handling as well as big improvements to off-road capability and support. Although, the key dimensions, such as approach angle, departure angle, and ground clearance are very similar to the 200 Series (VX variant; 32, 24, 230mm). But thanks to clever rejigging of the suspension and the added technology, such improvements exist. 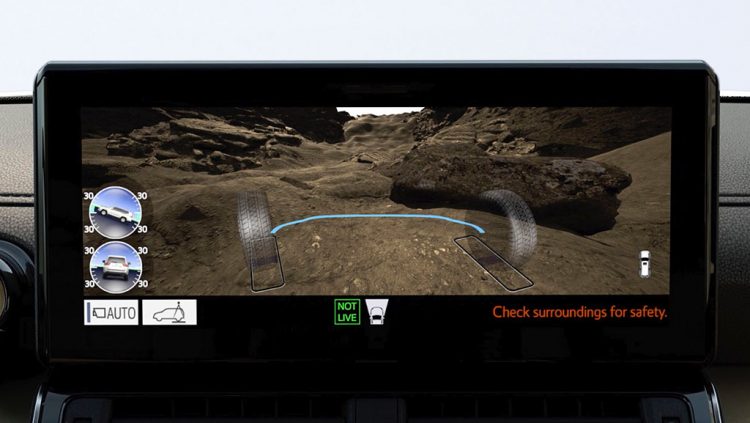 The engines. Firstly, there’s a brand new 3.3-litre twin-turbo-diesel V6, as suspected. It produces 227kW and 700Nm, (very) effectively replacing the outgoing 4.5-litre twin-turbo V8 diesel and its 200kW/650Nm outputs. This is matched to a 10-speed auto transmission. Toyota hasn’t mentioned fuel economy or 0-100km/h performance figures, but we should expect good things for both considering the reduced weight and increased output.

For petrol lovers, Toyota is bringing in the V35A 3.5-litre twin-turbo V6, as suspected. It develops an impressive 305kW and 650Nm, again, effectively replacing the old 4.6-litre V8 petrol (and 5.7 in some markets). It too is matched to a 10-speed auto.

Toyota also mentions there is a naturally aspirated V6 petrol and six-speed auto for some markets, and at some point a V6 hybrid is also expected. Details on the non-turbo V6 petrol are yet to be outlined, and Toyota is yet to provide firm confirmation of the hybrid. However, Toyota has said in the past that all core models will be offered with an electrified option by around 2025. 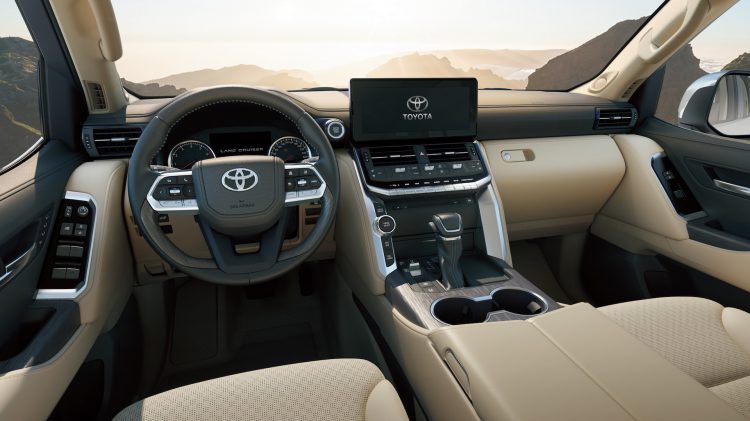 Lastly, the interior is presented in a way that blends modern technology and fixtures, with traditional elements such as plenty of physical buttons. There’s a wide-screen multimedia interface atop the dash, a fresh climate control panel in the middle with toggle-style switchgear, with a vertical control panel for the drive modes. There is a big digital screen within the instrument cluster, but Toyota has kept mechanical dials for the speed and rev counter, which is nice.

Three rows of seats continues for most models, with a five-seat arrangement perhaps on the base models in some markets. Details on boot volume and any changes to legroom and headroom have not been mentioned, unfortunately. But given the wheelbase of 2850mm is essentially unchanged, we wouldn’t expect much of a difference to the current 200 Series (1276L boot). 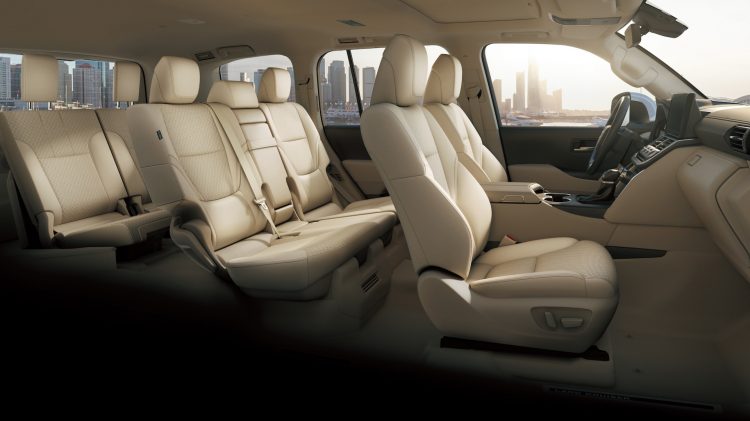 Toyota Australia confirms the 300 Series will go on sale locally in the fourth quarter of this year. It says Australia remains a prominent market for the nameplate, accounting for more than 10 per cent of all LandCruisers ever sold. Toyota Australia’s vice president of sales and marketing, Sean Hanley, said:

“In our quest to make LandCruiser tougher and more capable than ever, we have taken feedback from customers from around the world. This includes extensive input from Australian owners who have experience in some of the world’s harshest environments. The new LandCruiser range brings improved design and advanced new technologies that advance its performance in all conditions while enhancing its comfort, convenience and safety as a luxury vehicle.”

To really submerse yourself in everything 300 Series, check out the official reveal video below (has some interesting development highlights towards the end), and other promo videos: