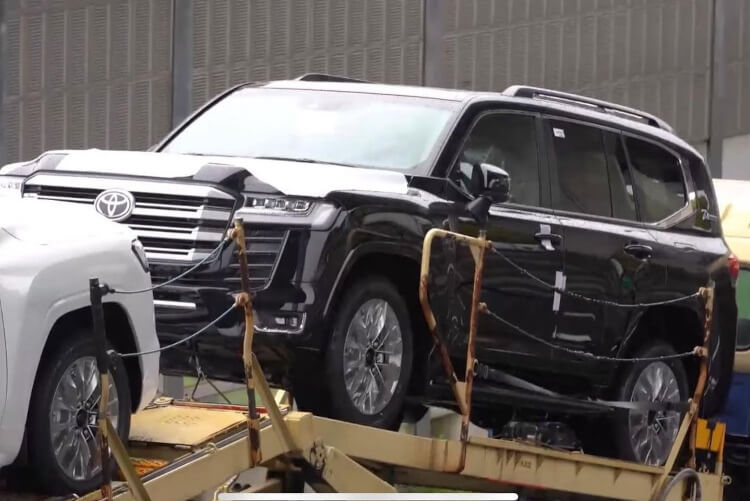 The 2022 Toyota LandCruiser 300 Series is set to debut very soon, but just before it does, yet more details have surfaced to whet your appetite including the GVM and GCM ratings. 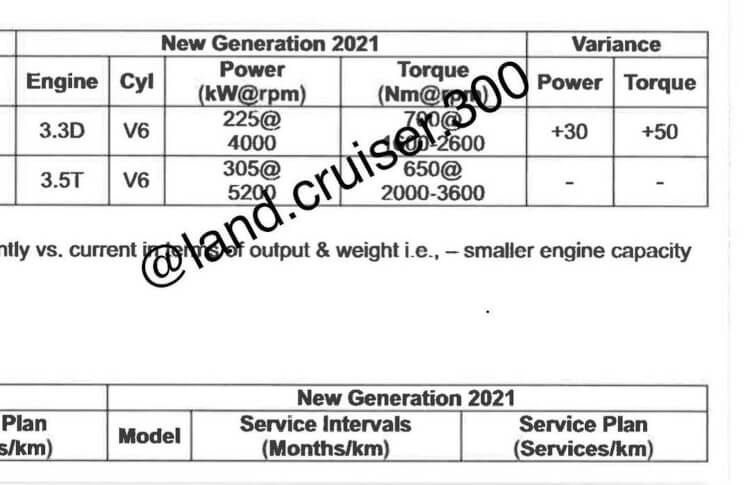 Here in Australia the outgoing 200 Series is in high demand. Some buyers are willing to pay a lot more than the retail price just to get their hands on one. Why? Well, there is strong reason to believe the new 300 Series will drop the trusty 4.5-litre twin-turbo V8 diesel. However, what buyers might not realise is that its replacement, a 3.3-litre turbo-diesel V6, looks like it will be more powerful and offer more torque.

According to a spec table posted up onto Instagram by land.cruiser.300, the new engine will develop 225kW at 4000rpm, and 700Nm between 1600-2600rpm. The specs apparently come from an official dealer bulletin sent out in South Africa, which means there could be some variance for different regions/markets.

These figures compare favourably against the outgoing 4.5 V8, which produces 200kW at 3600rpm, and 650Nm between the same 1600-2600rpm rev range. Zooming in on the specs, the new V6 needs only 400rpm more to hit a much higher peak power, while 50Nm of additional torque is available in the same window that the V8 supplies 650Nm.

Although fuel economy figures haven’t been uncovered yet the new V6 is very likely to use less fuel. The current 4.5 V8 has an official average of 9.5L/100km. Even under the newer WLTP testing system, which will likely be applied to the 3.3, we’d anticipate a lower figure than 9.5. 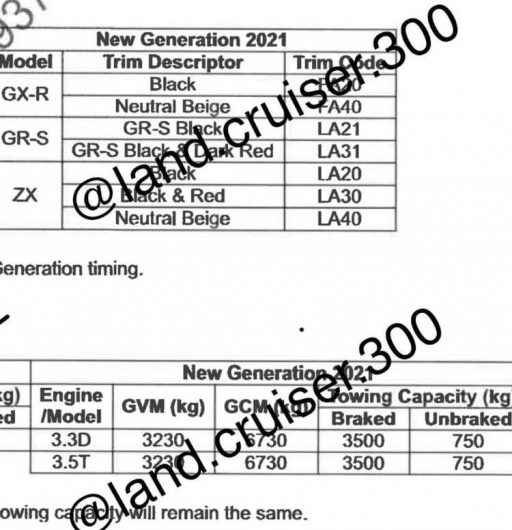 Potentially helping in this department is the idea that the 300 Series might actually be lighter in weight. The spec table shows a GVM (gross vehicle mass) of 3230kg, while the outgoing VX and Sahara are rated at 3350kg. This is obviously not the same as kerb/tare weight, but it could give us some clues. On the other hand, if the kerb weight is higher than the 200 Series (2740kg, Sahara 4.5), it means the new model will not be allowed to carry as much gear as the outgoing model; things such as bull bars, storage drawers, and additional off-road components and so on.

The GCM (gross combination mass), which is the maximum allowed weight the vehicle can carry and tow, is 6730kg, with a 3500kg braked towing capacity. Again, according to this spec sheet. For reference, the outgoing Sahara has a GCM of 6850kg. That’s not ideal for those wanting to tow, however, if the vehicle itself is around 100kg lighter, the translating figures would be pretty similar. If the new model has a heavier kerb weight though, the new GCM will not go down well with fans.

Also seemingly confirmed with the leak is the much-rumoured introduction of Toyota’s new 3.5-litre twin-turbo V6 petrol. This engine, which debuted in the Lexus LS 500, is set to produce 305kW at 5200rpm, and 650Nm between 2000-3600rpm. It will replace the 4.6- and 5.7-litre naturally aspirated V8 petrol options. This engine is set to offer the same GVM and GCM ratings. 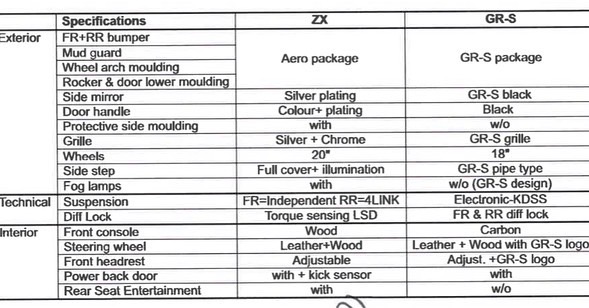 Some details regarding the model lineup, in terms of trim levels, have also been uncovered. It looks like the range will span from GX-R, GR-S, and ZX. However, Australian trim levels could be completely different. Other details revealed include things like independent front suspension with a four-link live axle at the back, as expected, and available torque-sensing limited-slip diff, and diff locks, depending on the grade.