You may have heard the term before in various cars, but what is a dual-clutch transmission (DCT) exactly? What does it do and is it any good? 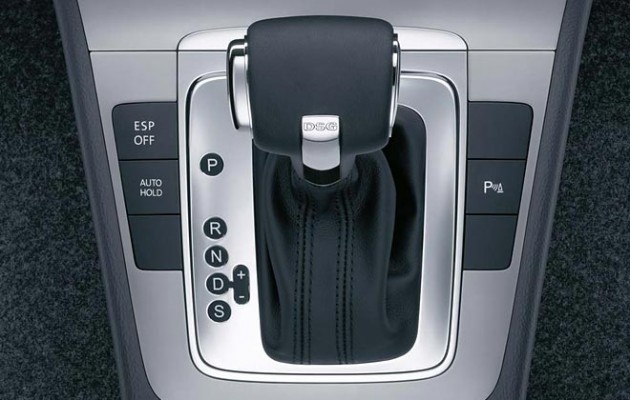 There are three main transmission setups that offer race-car style driving. They all provide some sort quick and easy method of selecting through the gears without the use of a clutch. Whether it’s through a ‘+’ and ‘–’ on the gear lever or paddles behind the wheel, the main function is to give the driver some form of interaction with ratio selection while still driving, what is essentially, an automatic gearbox vehicle.

The first and most basic forms of these are based on normal automatic transmissions that use a torque converter. Instead of selecting each gear by sliding the gear lever, usually 1 2 3 4 D or similar, these options are laid out in a simple + and – design. This allows you to tap up and down on the gear lever for relevant gears. You can do this repeatedly too, so if you know the car is in 4 (it usually says on the dash), you can tap the lever minus once and then tap it again to shift down into 2, so long as the road speed allows for it. 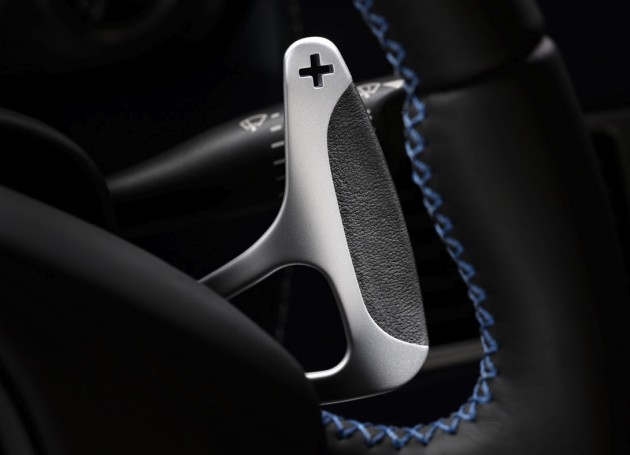 The next advance in this technology is a system early sports cars, such as Ferraris and BMWs, and race cars use, often called the sequential gearbox. Instead of using a torque converter to transfer the engine power through to the gearbox, an automated clutch is used. Specific designs vary but the main aspect is that the gearbox is setup pretty much as a manual, without a clutch pedal. When you shift the lever, or paddle behind the wheel, a clutch is engaged via an electro-hydraulic mechanism, the cogs are swapped and then the clutch is released. All of this is done automatically, without you needing to touch a clutch, you aren’t even made aware there is a clutch at all.

These types of systems have improved over the years, as manufacturers tried to smooth out the clutch engagement and generally speed up the gear change process. Various designs have succeeded in coming up with a fairly seamless design. These include gearboxes made for Ferrari vehicles and other sports cars, capable of changing gears in well under one second.

But like a normal manual, there is a small period of time when the engine’s power is not actually driving the car, and the car is simply rolling. A conventional automatic will also spin the centrifugal torque converter for a short period of time while a gear is being changed. This delay in time not only wastes the engine’s performance for a short period, but it also wastes fuel as the engine is producing power but it’s not actually going anywhere, a bit like if you revved a car in neutral or with the clutch depressed. 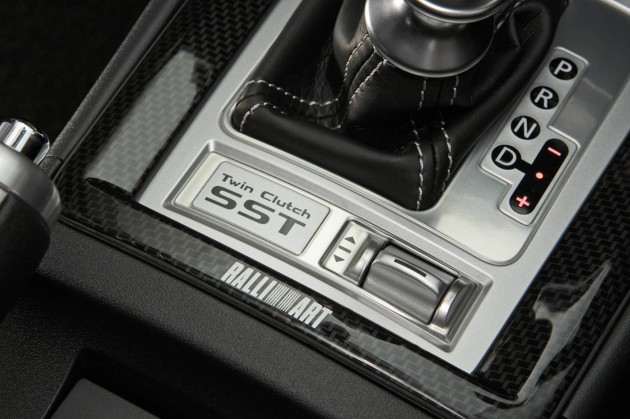 To overcome this literal waste of time, manufacturers have come up with a design which practically eliminates the period when the engine and gearbox is in ‘limbo land’ while the cogs are being swapped. The design is called the dual-clutch transmission (DCT). Manufacturers come up with different names for it, such as direct-shift gearbox (DSG) or sport shift transmission (SST), but the same basis design principle remains.

The easiest way to explain how this system works is to think of the car having two separate gearboxes. While one ‘gearbox’ is driving the car, the other has the next gear already ready to go. An electronic message is sent as soon as the lever is touched (or if it’s in auto mode and the revs are about to actuate a change) to get ready to swap over to the other ‘gearbox’. It is then simply a matter of the clutch swapping over to the other ‘box. How fast can you drop a clutch? Well that’s how fast a gear change can be in a dual-clutch transmission. Every time.

It doesn’t use two gearboxes though, it uses two clutches, so we’ll talk a bit more specifically now that you get the gist. 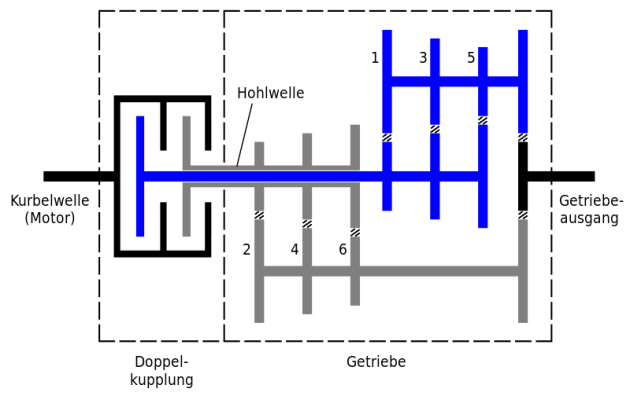 There’s two clutches, which act kind of like two gearboxes. One clutch operates the odd gears, such as 1, 3 and 5, while the other controls the even, 2, 4 and 6, for example. When you’re ready for the next gear, up or down, the gearbox has it already to go; it’s just a matter of the clutches alternating. The power from the engine is never wasted during the gear change process. And because one clutch can overlap the other clutch, time between changes can be cut down to almost zero seconds.

Almost every dual-clutch transmission currently used on production road cars uses two wet clutches. This simply means the clutches are constantly submerged in hydraulic fluid (oil) to reduce wear and to ensure smooth and almost instant engagement and disengagement of the clutch – usually while supporting a relatively high-torque, multi-piston engine. Dry clutch setups are used on motorbikes though, and are generally regarded as more efficient as no power is required to pump hydraulics. But on cars, there is a a lot more load at stake and wear can become a problem. 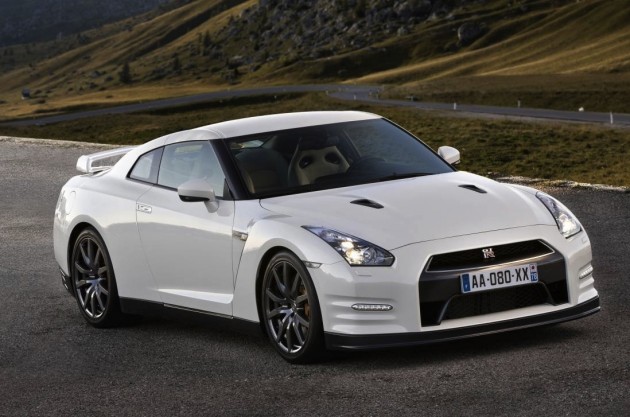 In some DCT types, such as the one used in the Nissan GT-R, the time it actually takes to go from gear 1 to 2 and so forth, is just 0.2 seconds. Just to give you an idea of how fast that is, the average blink of an eye takes 0.3-0.4 seconds, if you’re trying. The great thing is, almost all DCTs are very good at swapping gears fast and effectivily, so it doesn’t matter what sort of car your DCT gearbox is in… generally anyway. 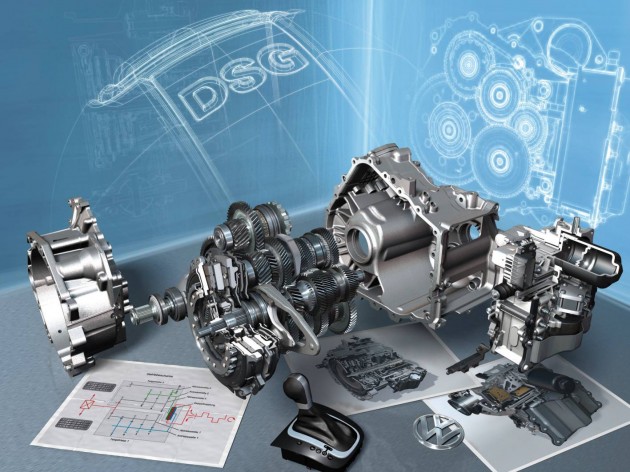 The first production car to feature a DCT was the Volkswagen Golf in 2003. It was fitted with a DSG (direct-shift gearbox) made in-house by Volkswagen Group under licence from BorgWarner. The first ever dual-clutch to be used was on a Porsche racing car back in 1980. It used a system, which Porsche still calls today, the Porsche Doppelkupplungsgetriebe (PDK), which roughly translates to ‘don’tgetsmartjustchangegearnow’.

Apart from volkswagen Group’s versions (Audi s tronic, Lamborghini e-gear), other cars that offer DCTs include Ford’s fitted with a PowerShift transmission, Mitsubishi’s Twin Clutch SST, some Peugeots and Citroens, while Renault and General Motors are both in the process of releasing a DCT. Even Hyundai has plans to widespread the technology into mainstream cars, starting with the upcoming Hyundai Veloster sports hatch. 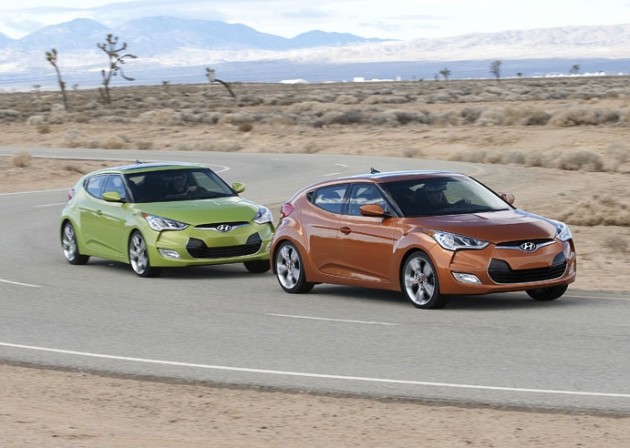 If you’re in the market for a new car, and are wondering what all this bother is with DCTs and DSGs, take comfort in knowing it is a good choice to make, especially if you’re on the verge of going auto from manual but would rather something sporty and interesting.

The only drawback to the technology is how durable the design is. No one really knows how the DCT will stand in the test of time. But this applies to all new things, and the DCT has certainly had good results so far.

A new connectivity system is being launched by Hyundai Australia called Bluelink, providing owners with the opportunity to connect with...