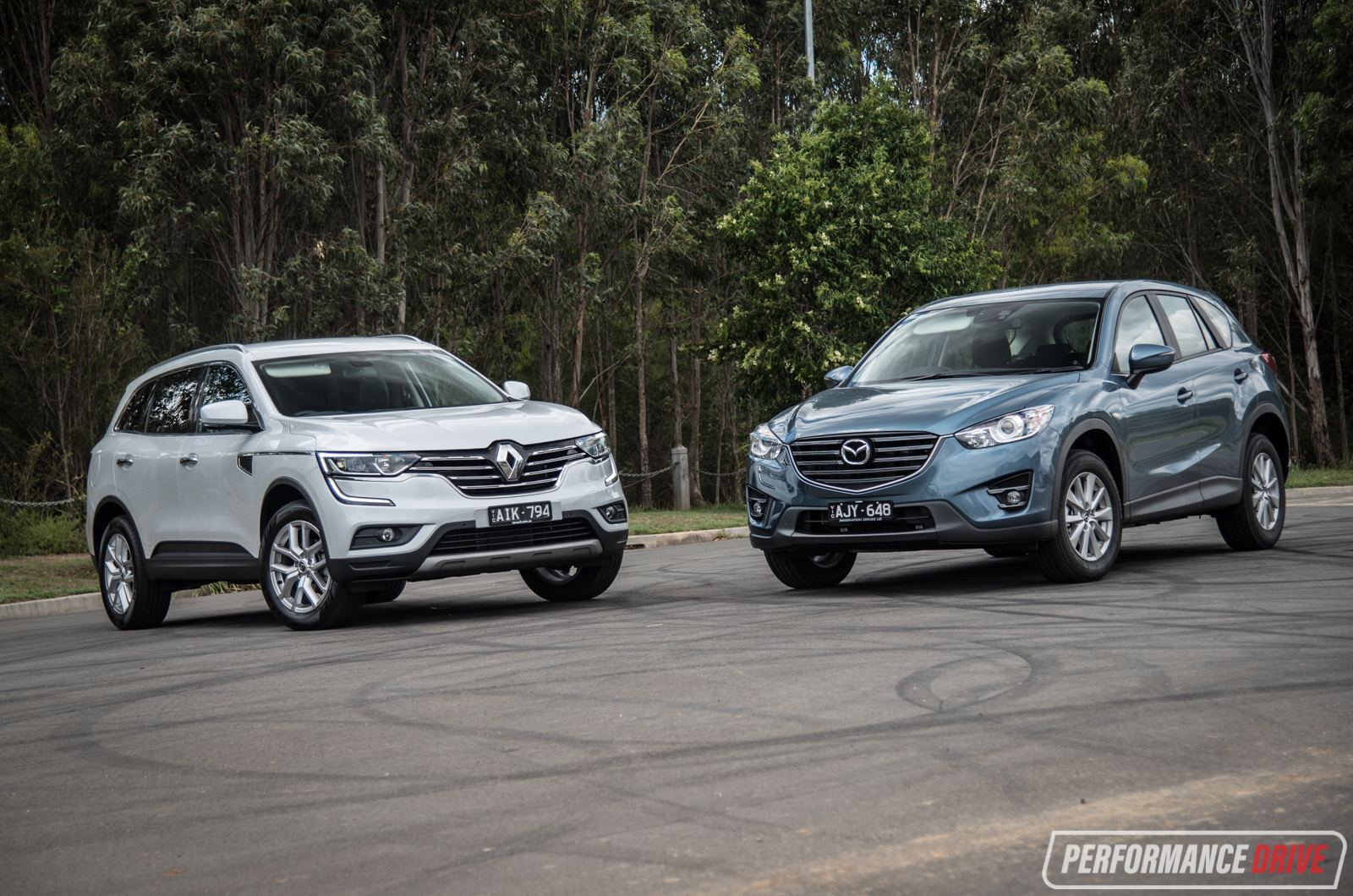 If you’re in the market for a mid-size SUV, or even a mid-size wagon, here we present you with two options. It’s the very popular Mazda CX-5 versus the Euro newcomer, the suave-looking Renault Koleos. 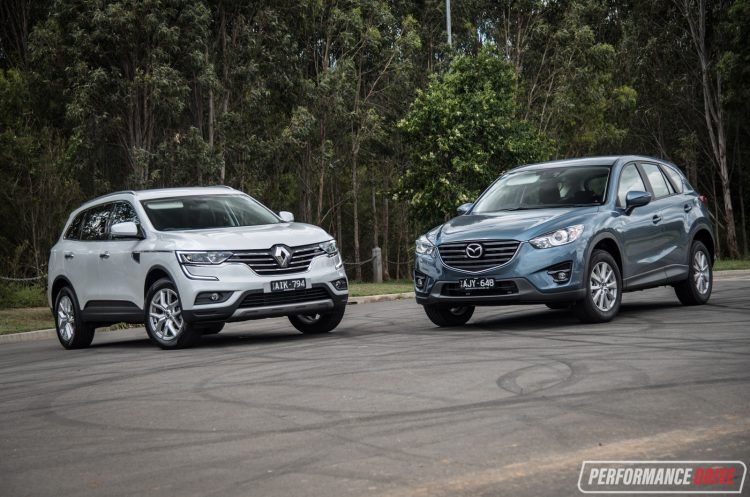 These two are neck and neck in terms of size, specifications, performance, and price. Specifically, we’re pitching the Koleos Zen front-wheel drive versus the Maxx Sport front-wheel drive, both of which are about one rung up from the entry level grade.

Renault has pounced back into the scene with its refreshed Koleos. And it must be said, it presents one of the flashest and most elegant designs in this class. Those unaware might be disappointed to hear it is based heavily on the Nissan X-Trail though, sharing the same underpinnings and powertrain. It’s also built by Samsung in South Korea, so it’s not really a French vehicle. As for the CX-5, it’s a Mazda that’s based on a Mazda (same as Mazda3 and Mazda6 platform), built by… you guessed it, Mazda, in Japan.

Prices for the Koleos start at $29,990, with this Zen model kicking off from $33,990. The CX-5 will be superseded in a few months with a vastly-facelifted version, which means you’re probably better off waiting if you can. Mazda Australia did announce a few updates for the existing model though, with prices kicking off from $27,890. This two-wheel drive Maxx Sport starts from $33,490. 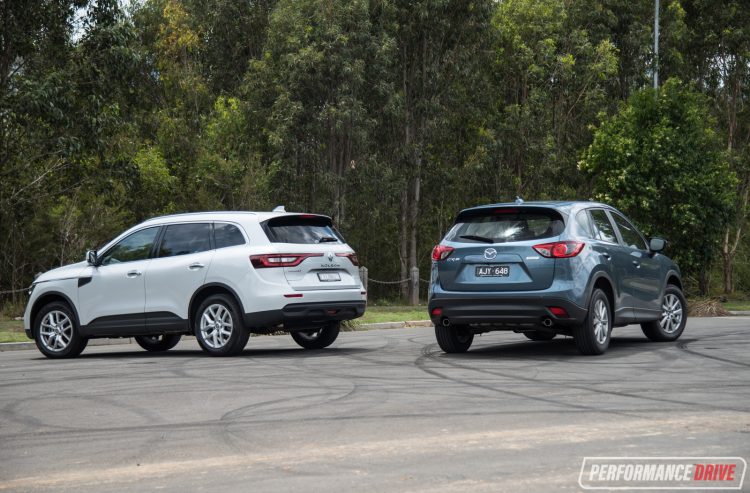 Firstly, we need to get something off our chest. The Renault key. It’s not actually a key. It’s an annoying card/tablet thing that doesn’t have a keyring attached to it. This means your house keys and your car key will always be separate. And if you’re prone to losing such items, be prepared for daily couch-cushion-digging frenzies. We found this card/key concept very annoying, especially as it doesn’t fit in your wallet, although it would fit in a decent-size purse (cutting off half of the market?). 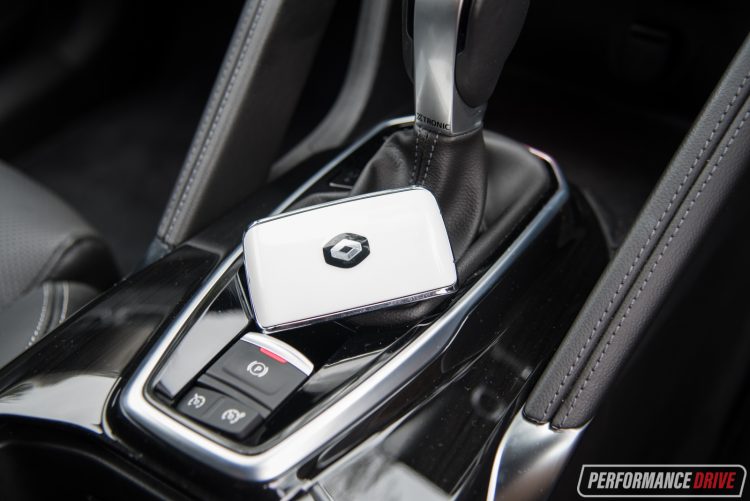 Both of these SUVs compete in the mid-size SUV market, and both stand at the larger end of the scale in terms of dimensions and cabin space. The Renault is the classier of the two, with a chic decor and leather upholstery. It also feels a bit airier and open compared with the CX-5, with a big centre console providing ample storage space. As for the CX-5, it is practical but with a slightly narrower centre console and smaller storage box. The decor is energetic and modern in comparison.

Seating space is very similar for legroom and headroom, but the Koleos does present a marginally wider setting. The front seats will be more attractive to larger individuals in the Renault, while the CX-5’s front seats are a little sportier and offer a bit more lateral support, but with a bit less overall width.

Rear seat space is almost identical, with the Mazda’s rear bench positioned slightly higher potentially sapping some headroom for taller people. An important yet omitted feature in the Mazda is dedicated climate venting for the rear, which could cause some complaints from the kiddies in Australia’s hotter months. Cargo space goes to the Koleos, offering 458L/1690L against the CX-5’s 403L/1560L. 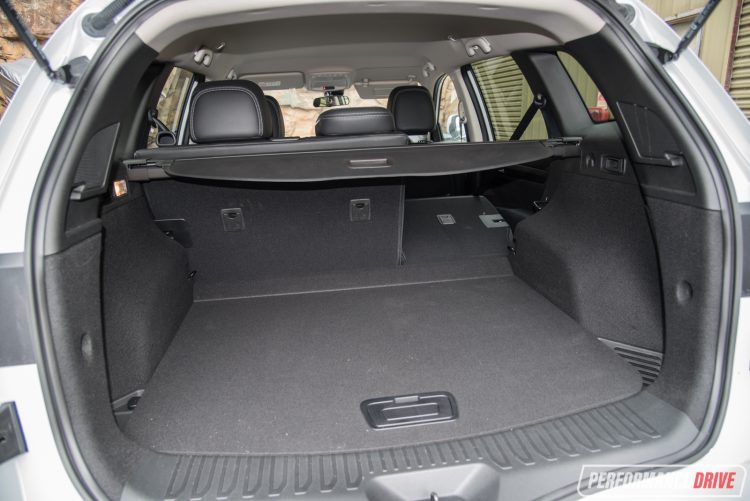 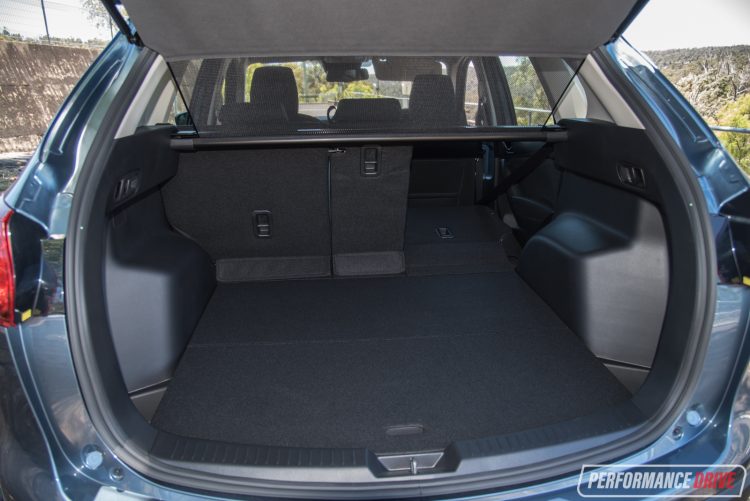 Where the two are really split wide apart is with functionality. We found Mazda’s MZD Connect system with its semi-remote hand controller to be flawless, with good, clear graphics and excellent operation within the interface menus. The screen is also touch-responsive when the car is stationary. With its hand controller down on the console, it is very easy to make your selections while on the go, without taking your eyes off the road for very long at all, if at all.

In the Koleos, its touch-screen is very confusing and cluttered, and you do need to focus your attention away from the road for a longer time than you’d want to. For example, to go from radio to media (Bluetooth or USB) via the touch-screen you have to make at least four selections (can be more), depending what you choose as your home screen/where you last left it. This is just one example. 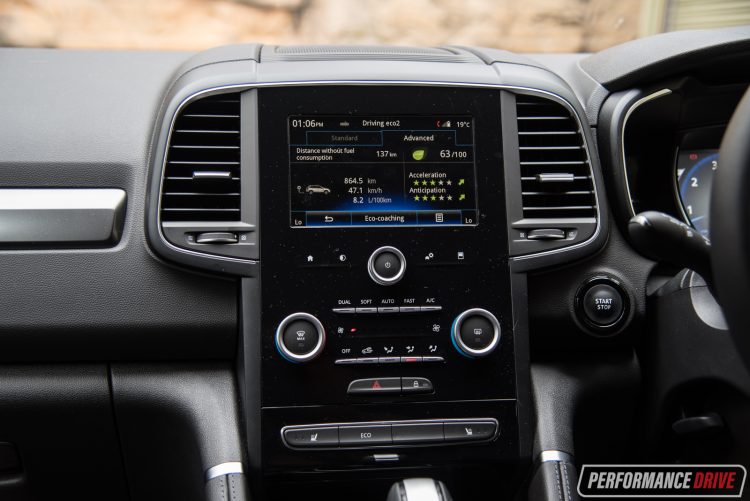 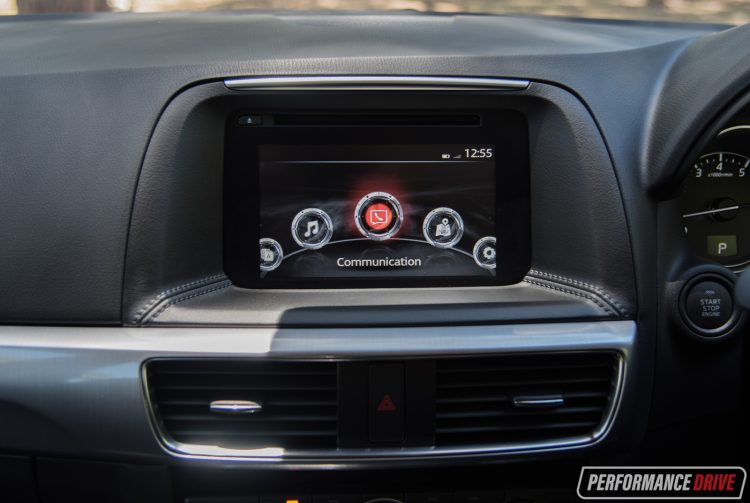 There are many other functions that require far too many touches/selections. About the only redeeming feature is that you can change the colour scheme for the touch-screen program and the mostly-digital instrument cluster in the Koleos, adding some exclusivity and novelty.

There are no media controls on the steering wheel, but there is an awkward pod that protrudes out from behind the steering wheel, invisible to the driver, providing some quick audio controls such as volume and scan/track. It just seems like a bunch of people have engineered the Koleos interior without actually communicating with each other. 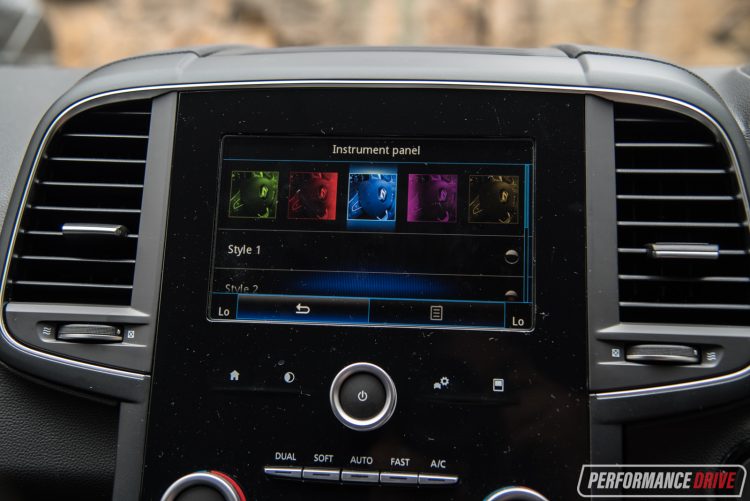 Mazda only offers the 2.0-litre petrol for the front-wheel drive CX-5s, against the Nissan 2.5-litre in the Renault. Outputs are 114kW/200Nm versus the Renault’s 126kW/226Nm. Mazda does win some of that back by being around 100kg lighter (1508kg vs 1611kg), and this is reflected in the acceleration performance. We timed a best 0-100km/h run in 9.48 seconds in the Mazda versus 9.40 in the Koleos. So, despite the difference in engine size, the Mazda has to be awarded points here for being just as quick while requiring 20 per cent less combustion.

This brings us to fuel economy. The Renault is attached to an official average rating of 8.1L/100km while the CX-5 is slapped with a consumption average of 6.6L/100km. In the real world we found the Renault to be the least thirstiest, but only just. Perhaps this is because the Renault’s larger capacity engine requires fewer revs and effort to shift the car along, whereas the CX-5 2L does need to be pushed and revved before you can access anything above 50 per cent of its acceleration potential. In other words, if you live in the city and enjoy a ‘fast-paced’ lifestyle, the Koleos will be more in sync with you. Country-living buyers should turn to the CX-5 though as it can return a much lower consumption in open conditions. Peak torque is achieved at 4000rpm in the CX-5 against 4400rpm in the Koleos, but the CX-5’s fewer Newton-metres loses out. 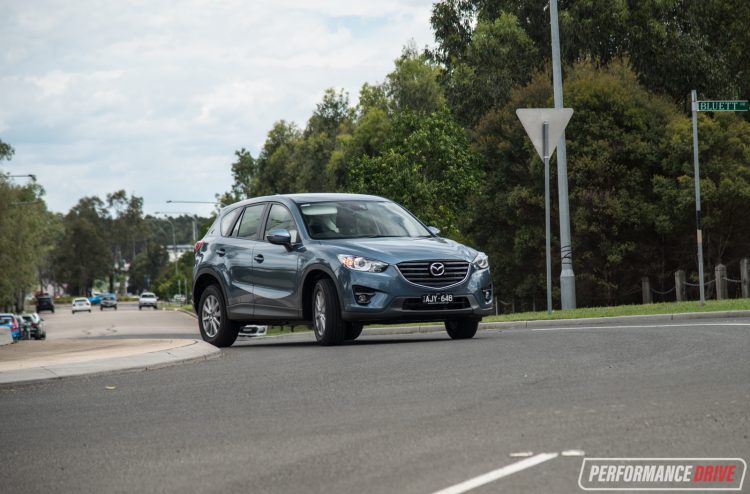 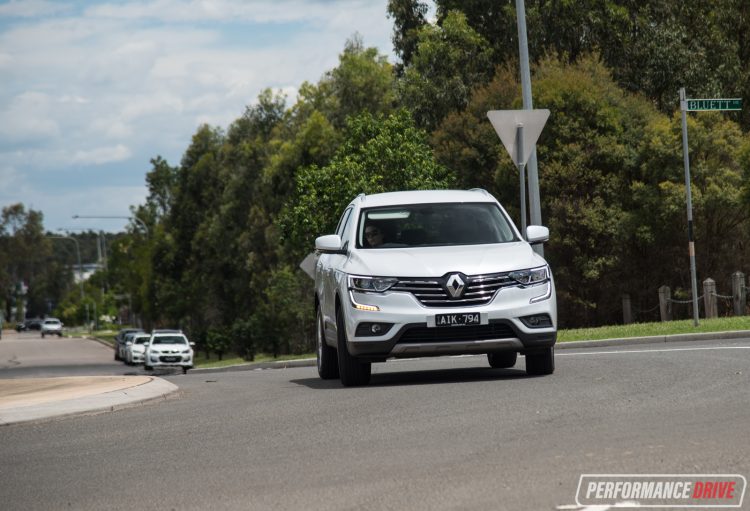 Both of these are very easy to drive and see out of, with thin pillars, high-riding seats, and good steering wheel and pedal placement. Handling isn’t really going to be high on your priorities here but the CX-5 is, in our opinion, the more capable machine. It uses a sturdier multi-link independent rear suspension setup against the Renault’s flimsier multi-link, and this presents a more comprehensive drive attitude and balance. The steering in the CX-5 also feels nicer, more engaging, and actually quite fun against the Renault’s formal yet purposeful system.

One disadvantage of the Renault being made in Korea is the fact there are some locally-sourced parts involved in the production process, such as the Korean-made Nexen tyres (225/60). These are noticeably inferior to the Mazda’s Yokohama  (225/65) tread. Emergency braking suffers in comparison, with our 100-0km/h stop coming up in 39.87m in the CX-5 and 42.77 metres in the Renault on the same strip of tarmac. Even so, the Renault gets sportier 18-inch wheels against the CX-5’s 17s, in this equal specification anyway.

Overall, both of these are very pleasant vehicles to drive. They are also very approachable and friendly with their exterior dimensions, making parking a breeze. Both come with a rear-view camera as standard too, adding reassurance in tight car parks.

Renault has produced an undeniably attractive SUV for this class, and it certainly comes with a truckload of Europe cache. However, after spending some time in both vehicles here we found the CX-5 to be the more complete vehicle. It seems as though Mazda has done more customer research in this field, with its significant step ahead in user friendliness. Therefor the CX-5 is the more appealing product out of these two in our opinion.

If you’re adamant about having something a little different and unique though – perhaps becoming a pressing issue in this flooded segment – the Koleos is worth a look. Renault will be launching a diesel version later this year too which should give it further distinction.