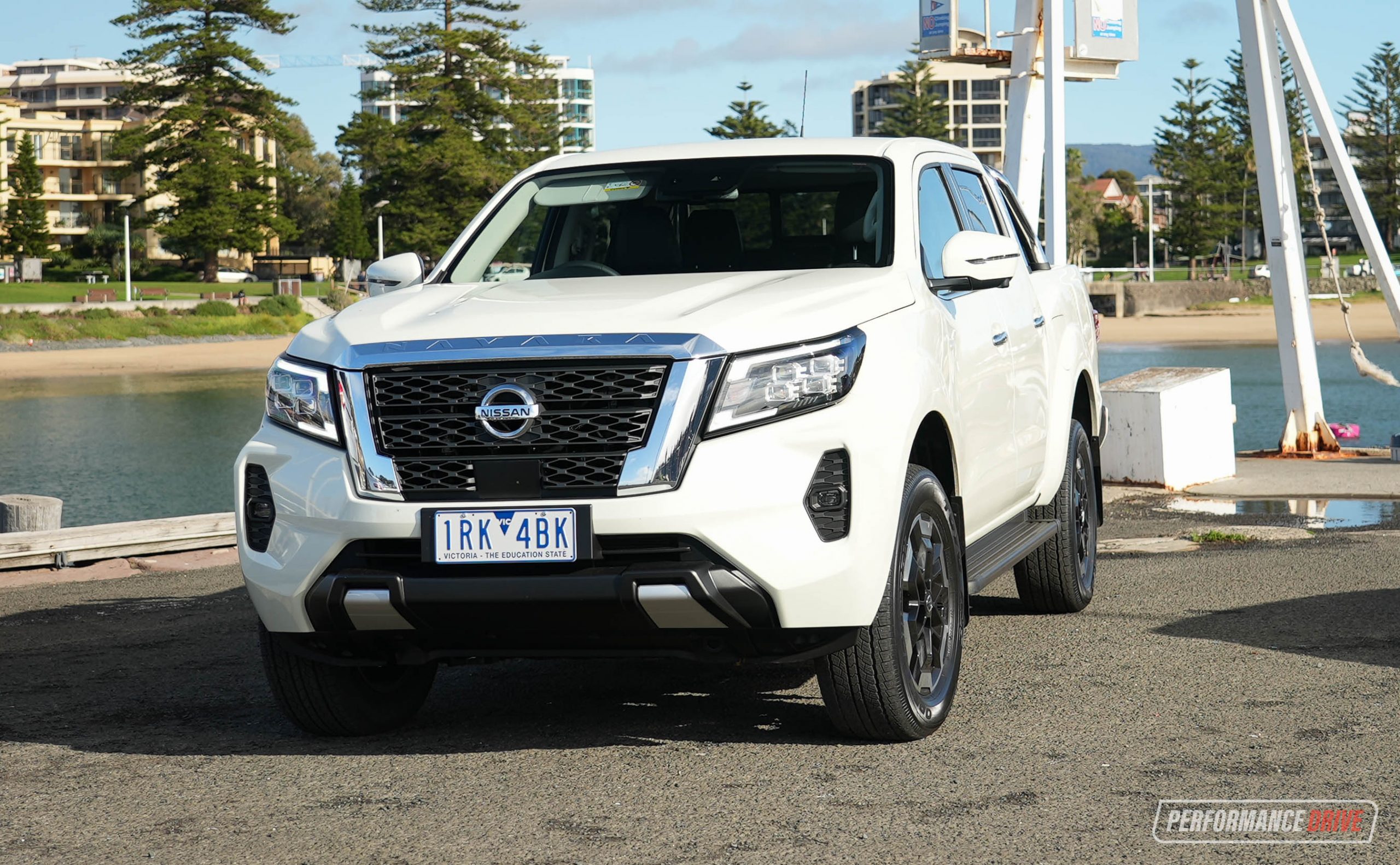 Nissan Australia recently launched the 2021 Navara range into the fast-evolving world of utes. Here we’re sampling the ST-X variant, which is essentially the top premium model, although, the new rugged-focused PRO-4X is more expensive and comes with heavier-duty features. 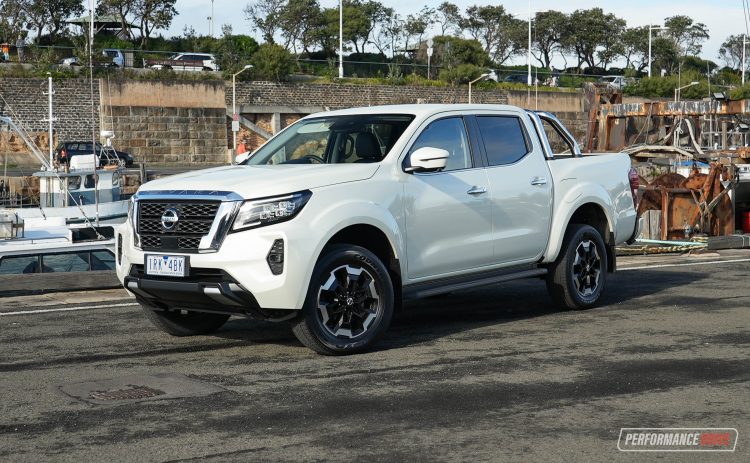 While the exterior sports a fresh new look, the interior has only been mildly updated to bring it closer to modern times. The main 2.3-litre twin-turbo four-cylinder diesel engine is also a carry-over unit. But more on that later.

This ST-X starts from $58,780, plus $1000 for leather interior, and plus another $1000 for a sunroof (all excluding on-road costs). Going for the manual saves you $1500, and we guess it is interesting that a manual is offered at all given the current buying trends. 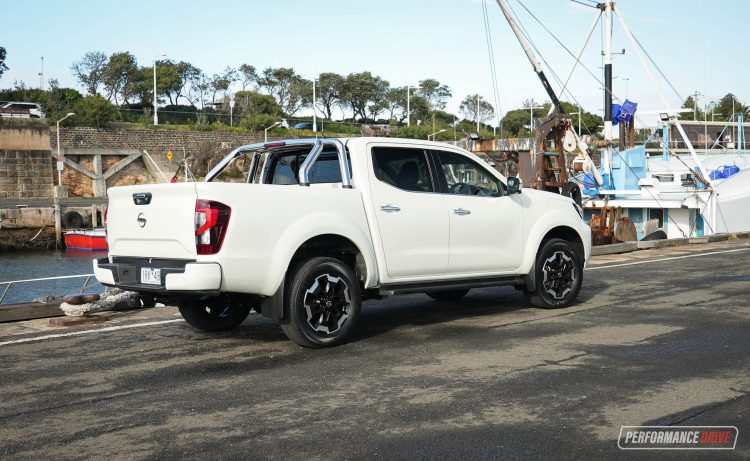 We like the new-look design. And in fact, we’ve always admired the design of the latest generation D23 model. It looks both tough and dependable, but also refined and somewhat stately. For the new model Nissan has provided a bigger front grille in its V-motion layout, which seems to amplify that stately theme. Fresh C-shaped headlights ensure a unique face compared with the rivals, while the main torso and doors are pretty much the same as before.

The tailgate now includes an embossed Navara logo, and the trademark integrated ‘spoiler’ remains. We like the new-look 18-inch alloy wheels on the ST-X, with their black inner spokes and machined outer sections. They’re wrapped in road-oriented highway terrain tyres. If you are planning regular off-road adventures you’d definitely be better off with the PRO-4X and its all-terrain tyres. Or at least upgrade these standard ones. 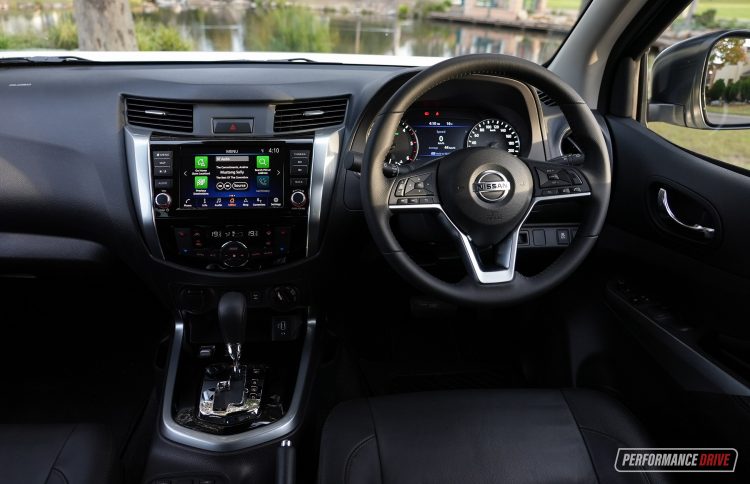 Despite looking quite different and fresh on the outside, the interior is a bit of a letdown in our opinion. The 8.0-inch touch-screen is new, but it does fall behind many rivals in terms of size and functionality. Nissan has applied its usual black/blue/green/white graphics theme, which isn’t that inviting, and the physical buttons on the dash are very similar to before. The dash is not as modern as some overall, and some of the button locations are not as intuitive as we would have liked. The digital screen within the gauge cluster also features basic graphics and colours.

The steering wheel is new and feels really nice in your hands, and the optional leather seats look suave and provide plenty of adjustment and reasonable levels of support. It is disappointing the steering column still doesn’t offer reach adjustment, only tilt – really, Nissan? Come on. As a result it can take some time to find an ideal driving position compared with some rivals. And even then, the position is not perfect. 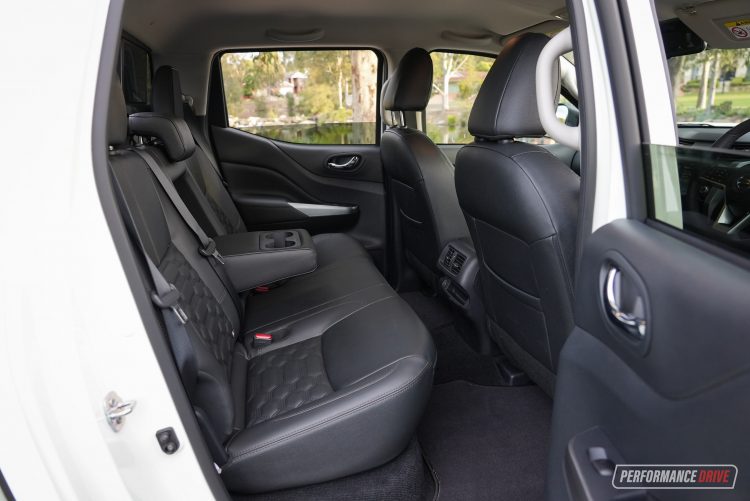 Rear seat accommodation is pretty decent, with climate vents and a charging port on offer, and there’s even a flip-down arm rest with twin cup holders. There’s also bottle holders in the doors and Nissan has continued on with its fun opening rear window/portal into the tray area. Passenger space is about average for this class. 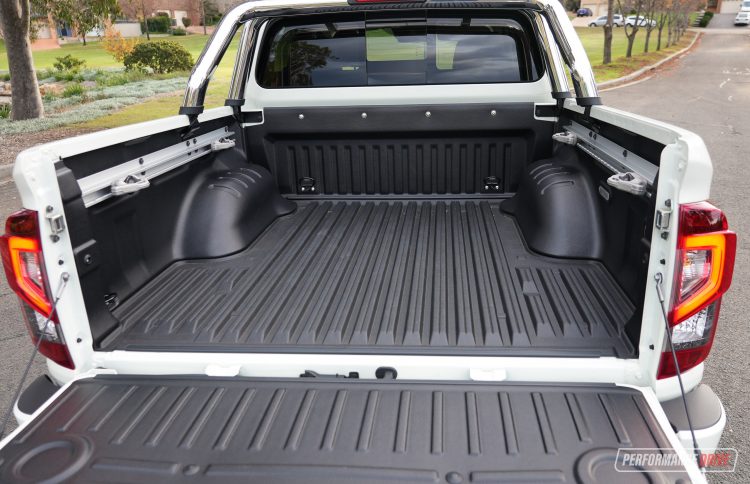 The engine could have done with some mild tweaking, especially to coincide with this major facelift. The official fuel consumption average is 7.9L/100km, which is competitive, and the emissions average is 208g/km, which is also on par with the modern rivals (HiLux SR5 auto is 207g, for example).

However, at 140kW of power and 450Nm of torque, the outputs are only average now; the most popular contenders these days develop around 150kW and 500Nm. The fact there is more tech inside means the weight has climbed too, further reinforcing the need for some engine enhancement.

Many utes have received pretty decent revisions in the last couple of years, including refinement improvements to their engines. This 2.3-litre diesel is starting to fall behind in this area too. We think it’s a bit noisy. Clattering and rattling levels are low, but noise and the general sense of stuff happening under the bonnet does seem a tad excessive for the latest standards. And it’s constant. Most competitors, such as the HiLux, D-Max/BT-50 and Triton really quieten down once you’re up to highway speed. The Navara seems to maintain a set noise level across a broad range, although it’s obviously louder when revved high. 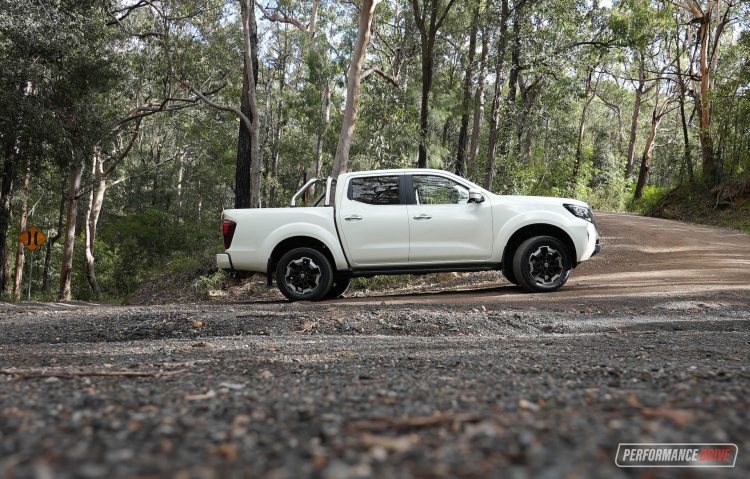 Getting up to speed is done with reasonable ease, and the seven-speed auto does well to divide up and spread out the available torque. There are moments where the transmission will remain in a higher gear and let the engine torque surge you along. The revs don’t drop too low and the engine doesn’t feel stressed at any point, though. You simply notice the speed climb surprisingly quickly without much change in engine revs. So that’s a positive thing.

In terms of outright performance, we clocked 0-100km/h in a best of 10.34 seconds. This is slightly behind the previous model that we last tested (9.9). Having a look at the specs, it looks like this new model is around 100kg heavier than the predecessor. This likely comes from the added features and technology that’s packed in, as mentioned. 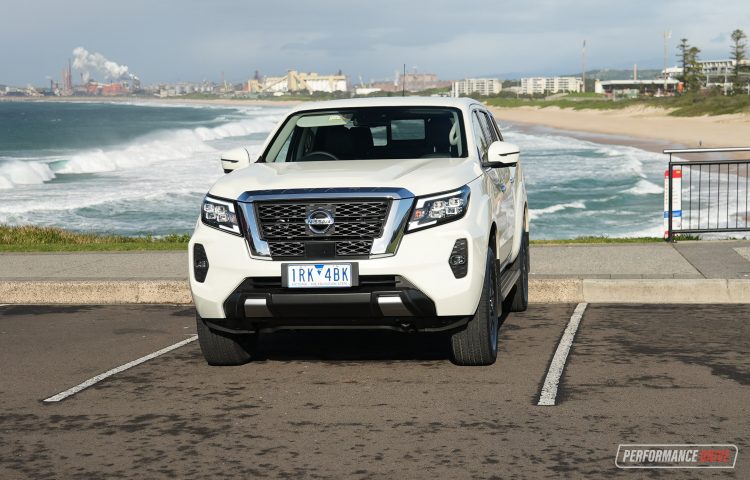 As before, the top model features a coil-sprung live axle rear suspension setup. This is a point of difference over most competitors. Coil springs are not as heavy-duty as the common leaf springs, but they do provide much-needed on-road comfort for a dual-cab ute. We guess it just depends on your priorities. We think the on-road handling is great as well. In fact, if you’re buying a ute and planning to use it mostly on road without much reliance on heavy-duty work, this is worth noting as a big plus. Because it means the daily errands can be performed and there’s minimal fatigue or sacrifice; it rides just like an SUV.

This example offers a one-tonne payload capacity (1024kg), which is good for this specific dual-cab class, and the towing capacity is at the maximum 3500kg. The ground clearance (224mm) and the approach angle (32.7 degrees) are commendable for this class, but the 20.3-degree departure angle is not. Again, if you’re frequently off road, we recommend considering the PRO-4X variant. Even so, the ST-X does come with the usual gear, including dual-range and a locking rear differential. 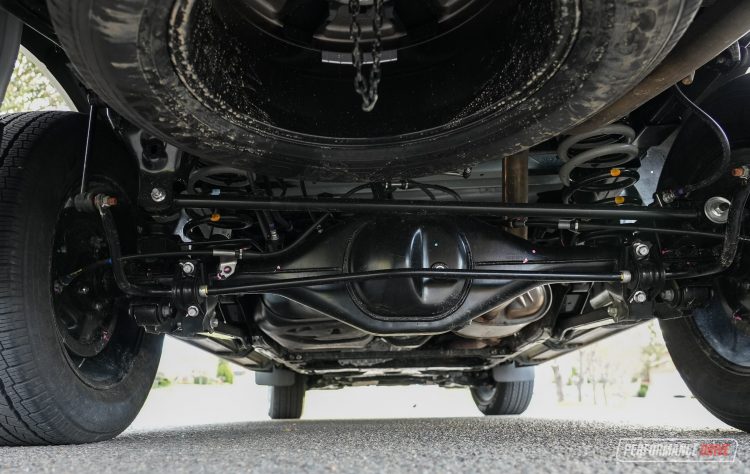 Nissan had an opportunity to create something special here and really push ahead of the crowd. But, we feel like the company wants to remain average. It’s like it wants to sit in the middle of the class. Take this as just a mild facelift and you’ll be impressed. If you’re expecting big new things, like what some of the recently-updated rivals brought in, you might be disappointed.

We like the fresh exterior design and enjoy the comfortable ride with those coil springs – and the on-road handling is quite good. However, the engine is now starting to fall behind in terms of output and refinement, and the in-car tech isn’t as appealing as some. Overall, this is definitely a worthy all-rounder to consider, and it’ll probably remain in the midfield on the sales charts.