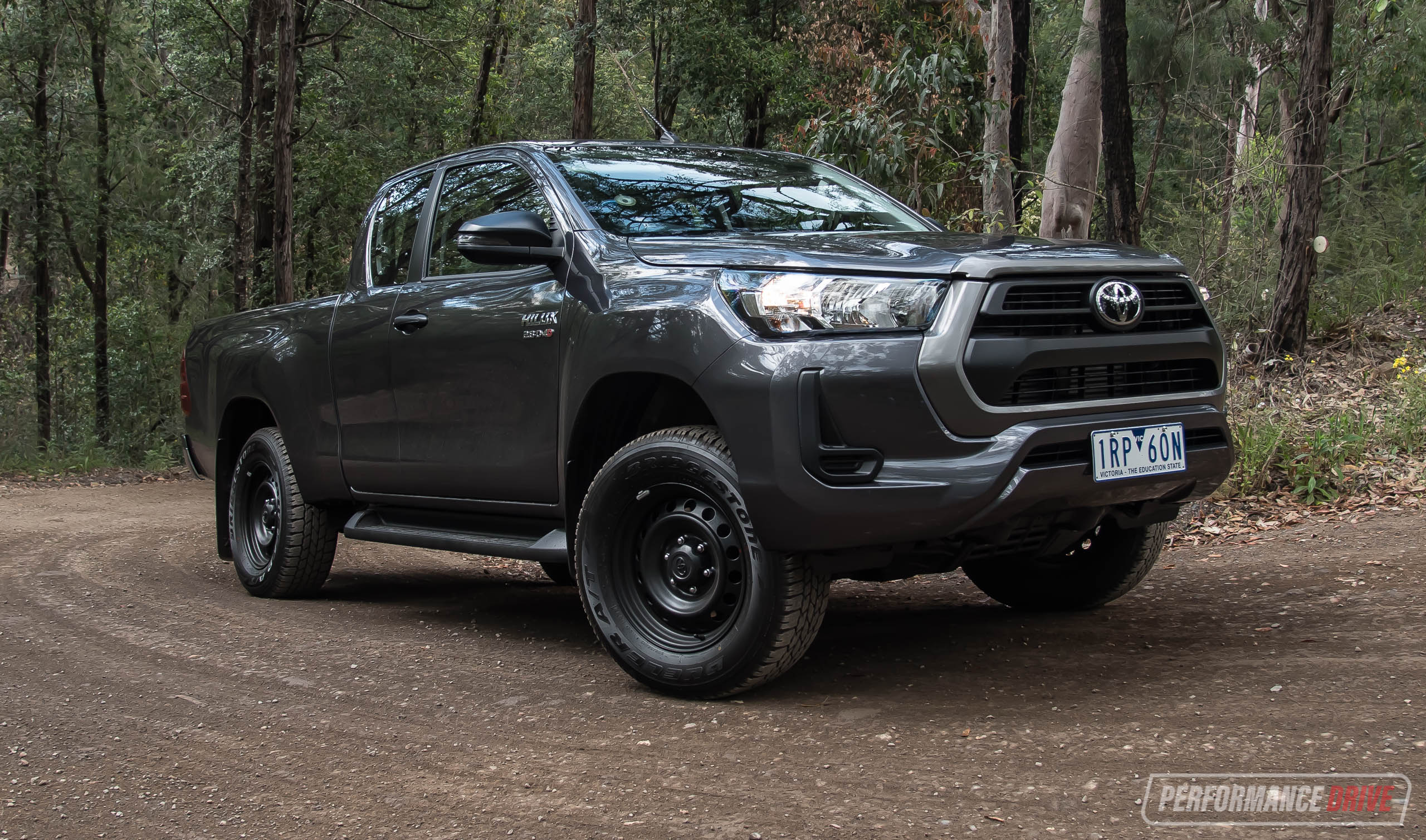 It seems to be the year of the utes this year. And perhaps one of the biggest to launch is the 2021 Toyota HiLux. Here we’re taking a look at the SR Hi-Rider extra-cab, in 4×2 form, as a first taste. 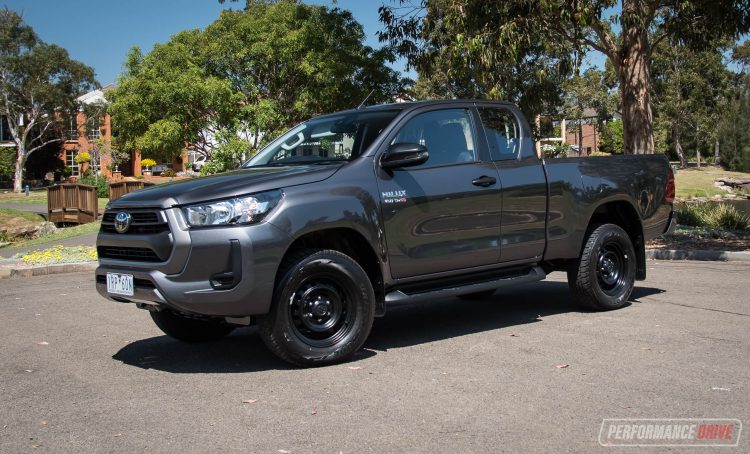 The HiLux is the best-selling new vehicle in Australia, outright. So far this year (through September) Toyota has sold an incredible 30,122 examples of both the 4×2 and 4×4 models. That’s more than VW’s entire fleet of passenger vehicles sold over the same period (29,583). In other words, motorists just can’t get enough of these.

For the 2021 model Toyota has made a few significant changes, a few minor ones, and left some things the way they were. In that sense it’s not a major all-new model changeover, but a typically-Toyota product evolution. We get the sense this is a company that makes incremental updates to important areas, albeit launching a fairly substantial foundation with each generation. 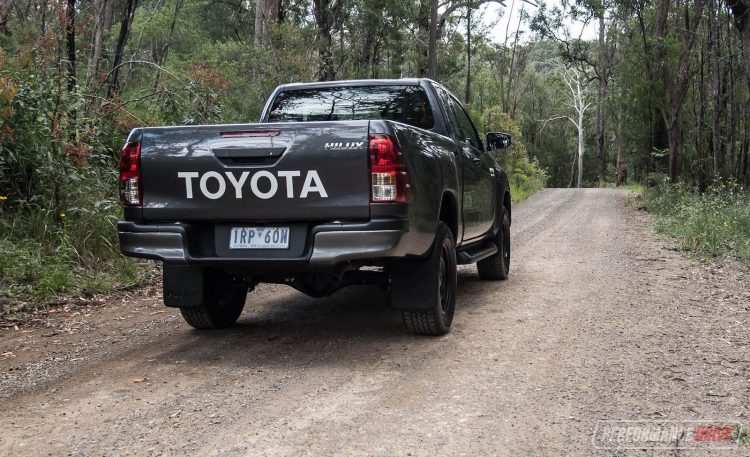 Firstly, what’s new? Well, the dashboard now features an 8.0-inch touch-screen media interface, standard across the board. This is great for the lower-spec models as they were previously offered with a 6.0- or 7.0-inch unit. However, some buyers of the SR5 and Rogue/Rugged X might feel a bit shortchanged since they are getting the same offering as the base models.

The size is pretty standard these days and could be seen as a bit basic for those top models, too. For the SR, though, it hits the spot. Everything from the colour palette used for the graphics, to the physical main menu buttons around the screen, to the physical volume and tune twist-knobs. These are all practical-minded measures and work well for busy motorists, if a little lacking in frills and functionality. 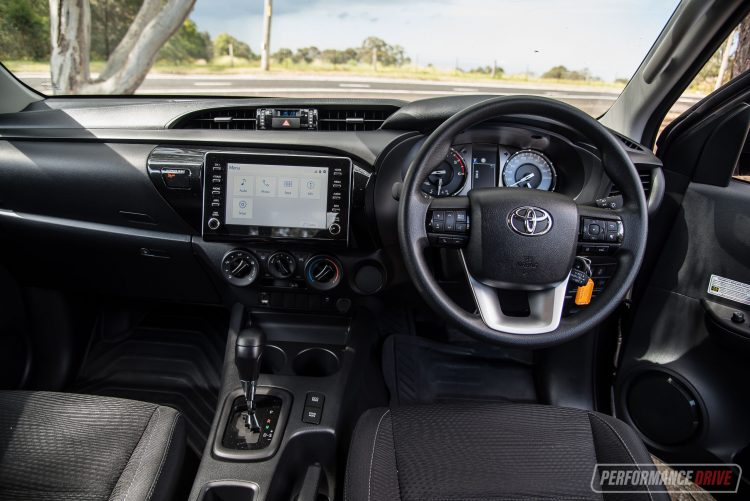 Going for the SR5 adds in-built sat-nav and digital radio, but the new screen means, finally, the HiLux is fully compatible with Android Auto and Apple CarPlay. The SR also comes with a reversing camera (as with all pickup body styles), auto headlights, distance-controlled cruise control, and autonomous emergency braking with pedestrian detection.

It’s a very user-friendly cabin overall, with dual cup holders at the front of the centre console, a big trough for your phone in front of that, and another, smaller tray next to the proper manual handbrake. There’s also big bottle holders in the doors with a partition for other items, and a decent-sized centre console box and arm rest. 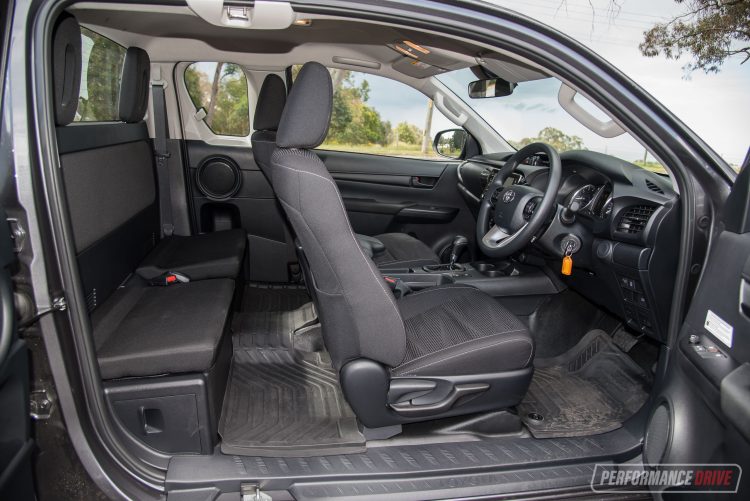 Passenger space in the front is good, and although the seat height requires a bit of a step up to get in, the visibility is great and you can peer over the side mirror for a clear indication of what’s behind the driver’s side A-pillar. About our only gripe with the cockpit is the driving position. The steering column can be adjusted for rake and reach, but for me (170cm), the steering wheel doesn’t pull out far enough. Instead, I have to slide the seat forward but then my knees are bent up slightly. Even if I am of unusual proportions, the Ford Ranger and new Isuzu D-Max, for example, don’t feel as awkward for me.

As for those rear seats. Well, this is an extra-cab and they aren’t intended for extended use. Great for the kids, yes, as they’ll love the little pop-out side windows. But the backrest, which is sheer upright, and the thin cushions mean it isn’t going to be comfortable for longer journeys. Headroom and legroom aren’t actually that bad, though. 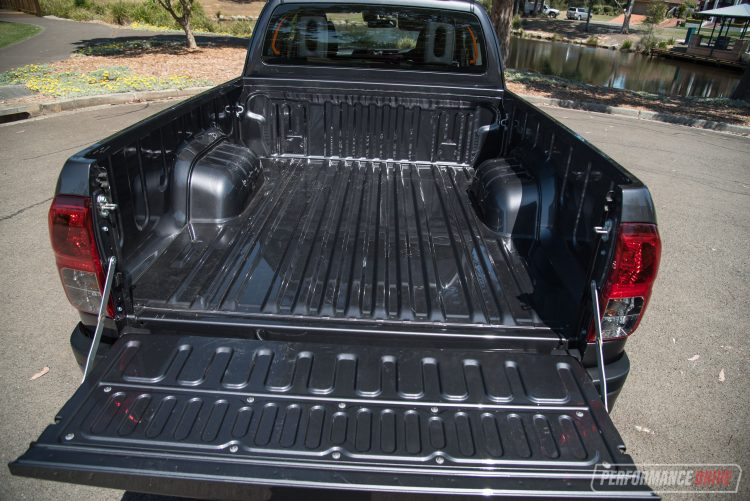 Going for the extra-cab body means you’re obviously interested in sacrificing passenger space for more cargo space. The tub is huge and features four tie-down points (one at each corner). We find the tailgate to be a bit basic in its mechanism, with simple scissor hinges and no soft-open/damping as it lowers. There is no tonneau cover for the SR, although Toyota does offer a range of accessories to suit your needs.

The payload capacity for this variant is 1130kg, which expands to 1195kg when optioned up to the 4×4 version. The braked towing capacity is 2800kg, which, again, expands to the maximum 3500kg when going for the 4×4. 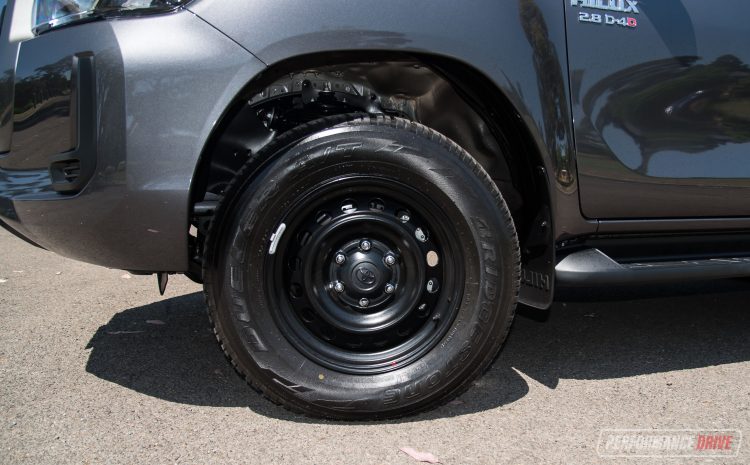 Although not a great deal has been changed inside, Toyota engineers have been very busy tweaking the hardware underneath. The suspension is completely overhauled, pretty much. There’s new, longer leaf springs at the back which have been developed to reduce vibrations, with wider spacing for the springs to help with stability during cornering, and new attachment points to improve steering.

A recalibration of the spring rates, shock absorbers and bushes is also applied, along with revised cabin mounts. All up, these changes promise to improve handling response and ride comfort, especially on country roads when driving with no load in the back. Toyota has also fit up a variable-flow power steering pump to improve fuel economy. 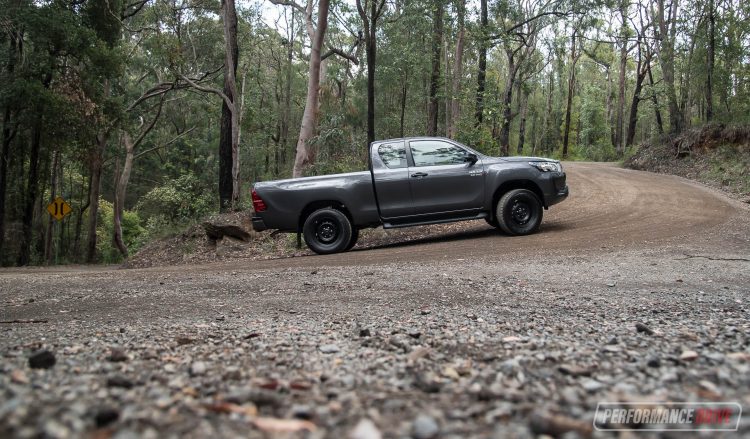 Has it worked? We think yes, for sure. We always take vehicles over a particular strip of bad bitumen on our test route which features shuddering corrugations. Everything from supercars to cheap Chinese utes has been subjected to the same run, at exactly the 100km/h posted speed limit. This HiLux bumped and bounced only a little bit. Coincidentally, we’ve just tested (reviews coming soon) the 2020 Ford Ranger Wildtrak and new Isuzu D-Max, so we still had the taste of them in our mouthes when hitting this badly-maintained strip.

We think the Ranger handled it the best, but that was the top-rung Wildtrak which may have more load over the rear axle in standard form. This would help minimise vibrations. With a large tray on the back of this extra-cab, there’s a lot more nothingness over the back wheels. More importantly, we can confidently say it managed the strip a lot better than the previous HiLux, and that was in double-cab form. 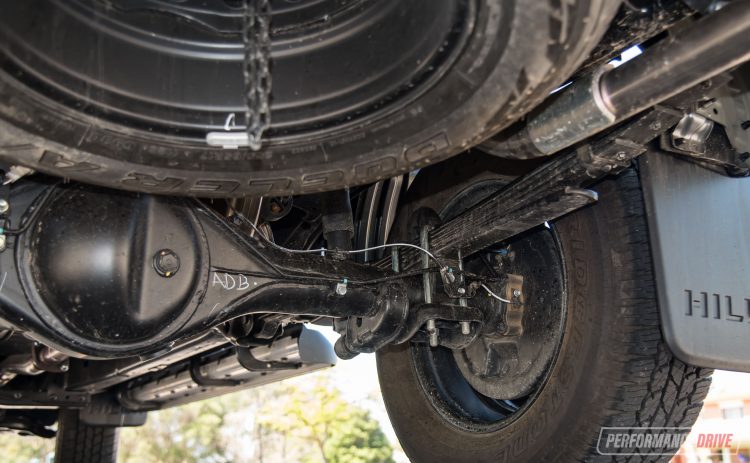 The handling of the HiLux has always been very good. There’s minimal body roll to contend with (for a ute), and the road-holding is impressive, especially considering the SR Hi-Rider uses all-terrain tyres as opposed to the SR5’s highway-terrain rubber.

The steering feels responsive and provides decent feedback, however, we did notice the steering weight is rather heavy at low speeds. This could be due to that new variable-flow steering pump. Overall though, the HiLux remains an excellent all-rounder in the department of driving dynamics. It doesn’t really out-handle the best out there, but it is up there and certainly higher than satisfactory for its intended purpose.

Lastly, how’s that revised engine? We’ll just cut to the chase. This is a beaut unit. With 500Nm available between 1600-2800rpm (expanded from 1600-2400rpm in the old 450Nm unit), there is no stress at all getting up to speed. It remains one of the smoothest engines in its class in our opinion, freely-revving to 4000rpm with a consistent and progressive roar. It obviously doesn’t sound good – it’s a diesel – but it seems quiet and refined for what it is. 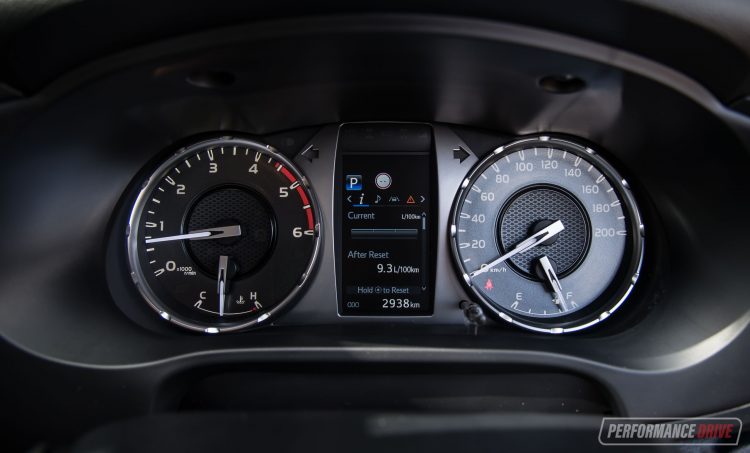 All of that 150kW is available at 3400rpm (the same as the old 130kW unit). You don’t need to rev it further but you can if you want to, and it doesn’t seem to mind it. Across the all-important (not really) 0-100km/h sprint we clocked a best run in just 9.01 seconds. That makes it the quickest four-cylinder diesel ute we’ve ever tested. Enough said?

If you’re always finding ute drivers travelling way too close to your rear bumper on the highway, there’s no need to worry anymore. They now have the performance to overtake you.

It’s a typically-Toyota product evolution. All of the best bits are retained and only the important bits are changed. The HiLux was already a great all-rounder, but, in our opinion, it lacked grunt and lacked in-car tech. These areas have now been fully rectified, and some bonus work has been done to the ride and handling.

CONS:
– Touch-screen still a bit basic, good for entry variants though
– Crude tailgate hinge, be nice with soft-opening/damping
– Driving position not quite right