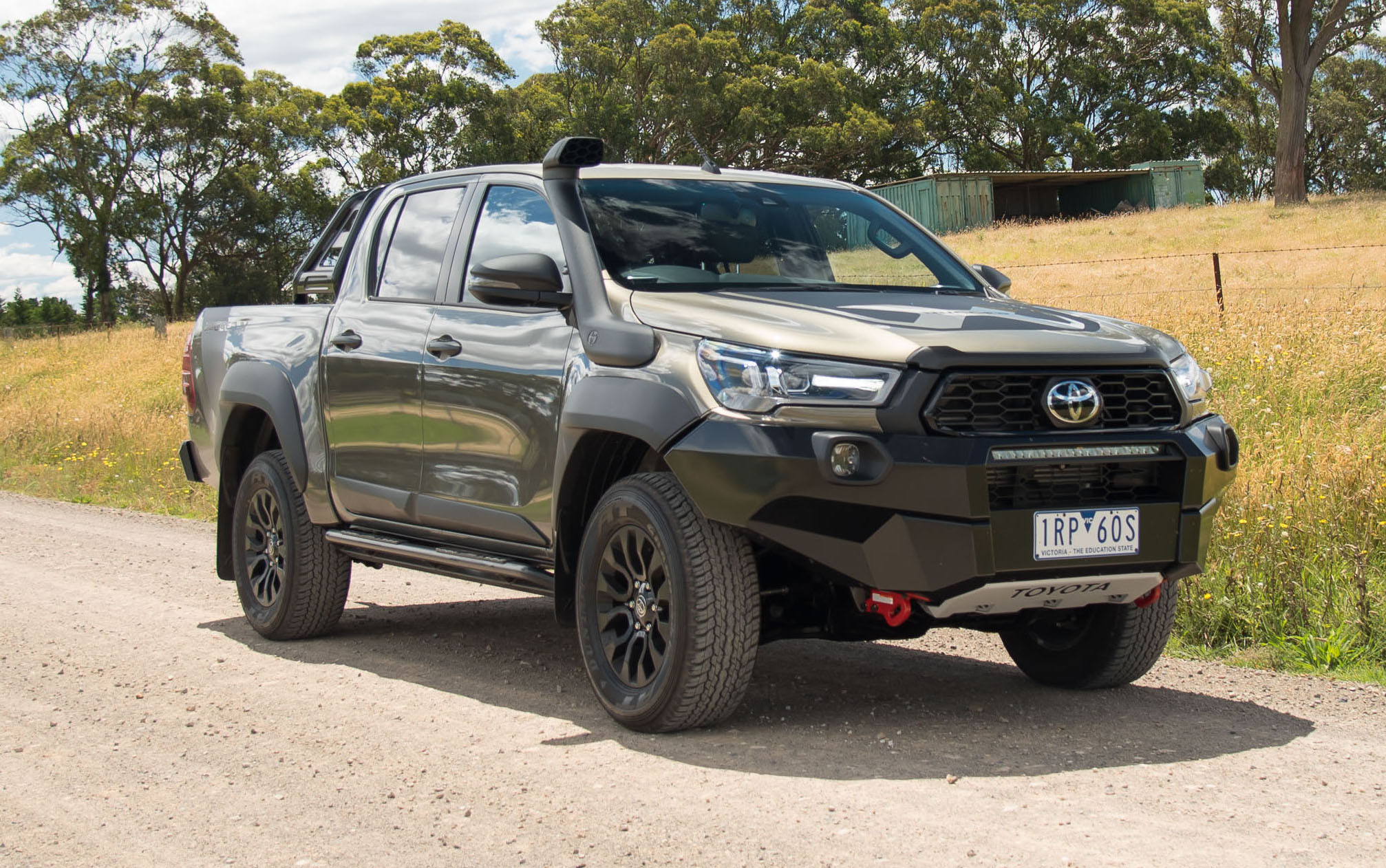 Sitting at not just the top of the commercial vehicle kingdom, but the top of the Australian new car market in terms of popularity, the Toyota HiLux never seems to put a foot wrong. Let’s take a look at the flagship 2021 HiLux Rugged X to see what all the fuss is about. 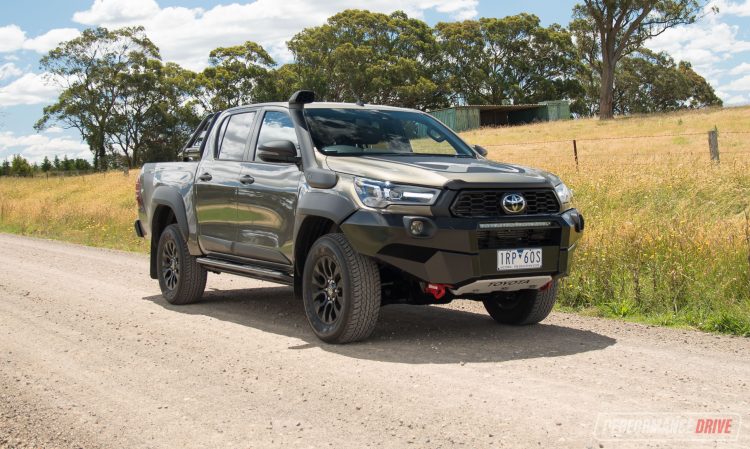 Toyota Australia launched the Rogue, Rugged and Rugged X in 2018 after seeing demand for spicer versions of its most popular model. It probably noticed rival manufacturers were already doing the same as well, what with the Ford Ranger Wildtrak and the like. For the 2021 lineup Toyota has simplified it down to the Rogue and Rugged X only.

They bring in a range of accessory-like features which have been honed and fined-tuned specifically for the HiLux. The parts are locally-designed and engineered, too, so they fit in with our market perfectly. The Rogue is more of a ‘work and play’ vehicle, while the Rugged X is equipped with hardcore gear to enhance off-road performance, protection and recovery.

Prices for the automatic Rugged X start from $69,990, excluding on-roads (Rogue auto starts from $68,990). That’s a lot. But consider this, if you were to buy the regular SR5 (or equivalent rival) and then apply a similar level of aftermarket gear, you’d be looking at a similar total sum (SR5 auto dual-cab is currently priced from $59,920). And at least here all of the parts are covered by Toyota’s full five-year warranty, and they have been developed as to not interfere with the HiLux’s five-star ANCAP safety rating. 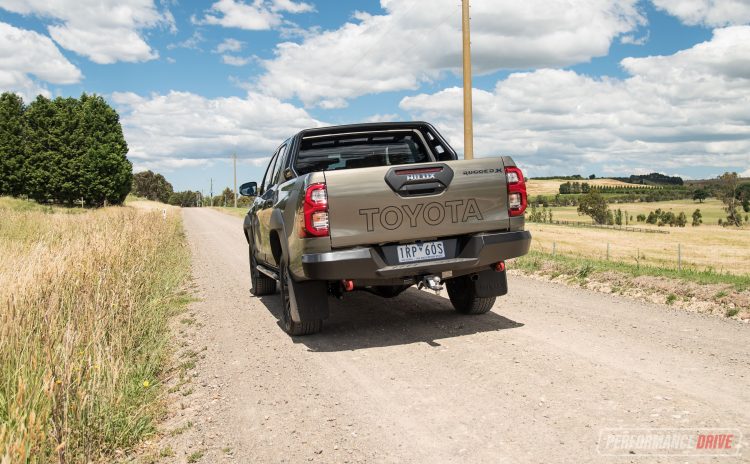 For example, an integrated bull bar for the 2021 HiLux from renowned 4×4 specialist ARB will set you back around $3000 alone (fitted). Adding the other parts soon sees that $10,000 in added value stack up. Here’s a list of the main enhancements for the Rugged X over the SR5:

That’s heaps of gear. We guess the question isn’t really about whether this stuff is worth the extra cost, because on value it certainly is. It’s more a case of do you actually need it? If you’re not planning to embark on regular off-road excursions you might be better off with the SR5. But we get it, sometimes it’s nice to have something special. Something that stands out. We’re simply saying there isn’t much point in complaining about the price premium over the SR5. 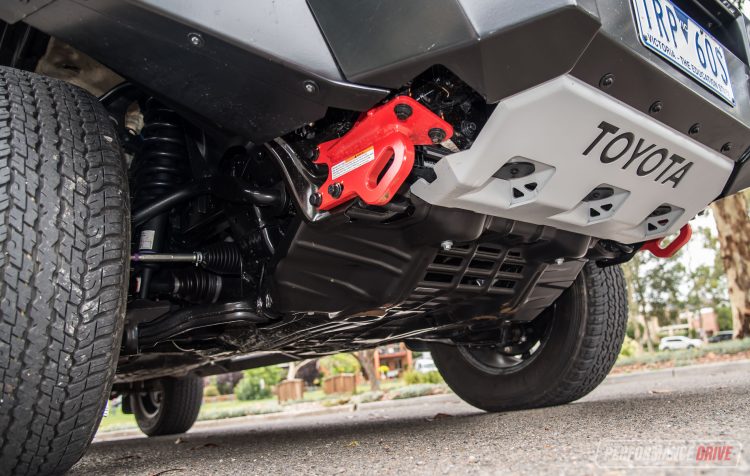 There are limited enhancements inside, with mainly cosmetic stuff like uniquely-trimmed seats with grey sections, and standard rubber floor mats. But other than that you’re pretty much getting the SR5 package, complete with everything available to the HiLux. In fact the only option is premium paint, which is an additional $600; Crystal Pearl White, Eclipse Black, Feverish Red, Graphite, Nebula Blue, Oxide Bronze, Saturn Blue, and Silver Sky. The only colour that isn’t premium is Glacier White (solid).

It is a bit disappointing there aren’t many appointments inside that separate the Rugged X from the SR5. Some rivals bring in unique sporty seats or brightly-coloured trims or stitching. We guess there is some appeal for a discreet interior decor. 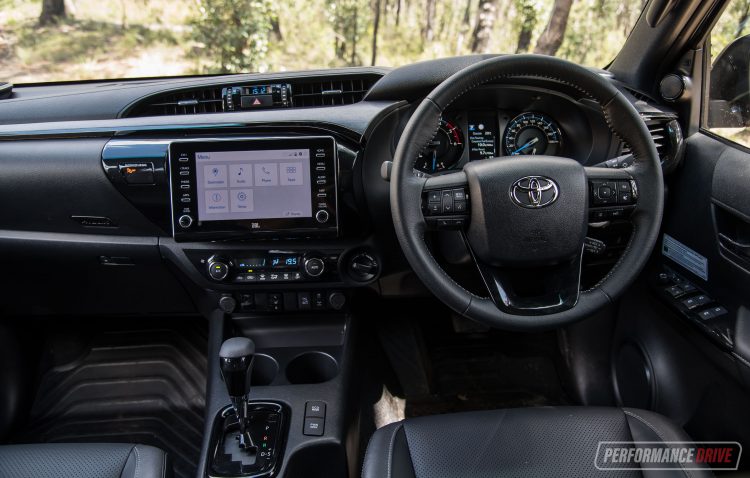 New for 2021 is an 8.0-inch touch-screen media interface which now includes Android Auto and Apple CarPlay, along with digital radio and integrated sat-nav. The Rugged X also gets a kicking nine-speaker stereo by JBL and heated front seats. Stuff like a rear-view camera, climate control with rear air vents, push-button start, adaptive cruise control, and auto LED headlights already come standard on the SR5 and carry over here.

Comfort levels are good for all passengers, although, like in the predecessor, we can’t quite find a perfect driving position – as is the case with many dual-cab utes, for some reason. The HiLux does feature a tilt and reach steering column adjustment as well as height adjustment for the seat, but there’s still just something odd about the alignment that we can’t seem to get right.

Passenger space is good in the front and back, and there are enough cup and bottle holders to keep everyone happy. It would be nice for Toyota to add a charging port for the rear passengers, whether it be USB or 12V, as utes are fast-becoming the go-to family car. Even on the job site, your team members might appreciate charging facilities when scooting from job to job. 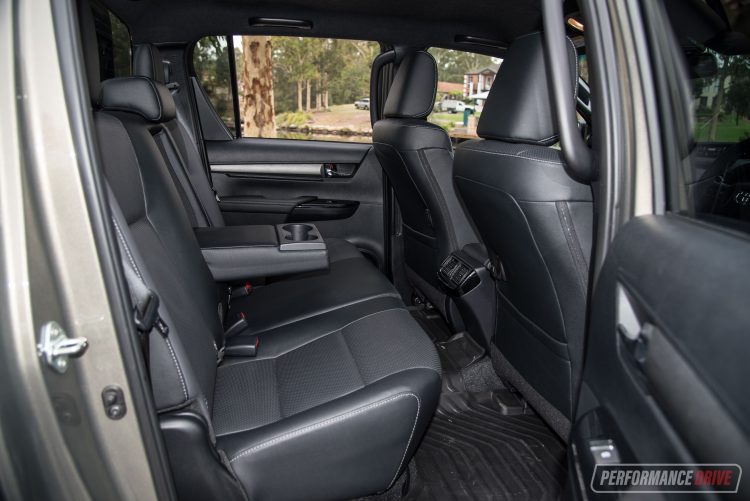 We’ve always said the HiLux presents very good on-road manners for its class. It’s not the absolute best-handling model, as that would have to go to the European propositions like the Mercedes X-Class. But the cornering composure and steering attitude feels about right for this style of vehicle. It’s not overly keen to turn in, which would be out of place, but it’s not so heavy-duty that you need to dial in loads and loads of steering lock just to make a simple turn. It’s just right.

The all-terrain tyres don’t provide the best highway economy or quietness compared with highway-terrain tyres that come on some utes. The dry and wet braking performance also suffers, with our Vbox results showing a 100-0km/h stopping distance of 43 metres in the dry. An average passenger car pulls up in around 38-40 metres, in the same testing conditions. But, on the contrary, these tyres can handle the off-road stuff with decent adequacy. More on that in a sec. 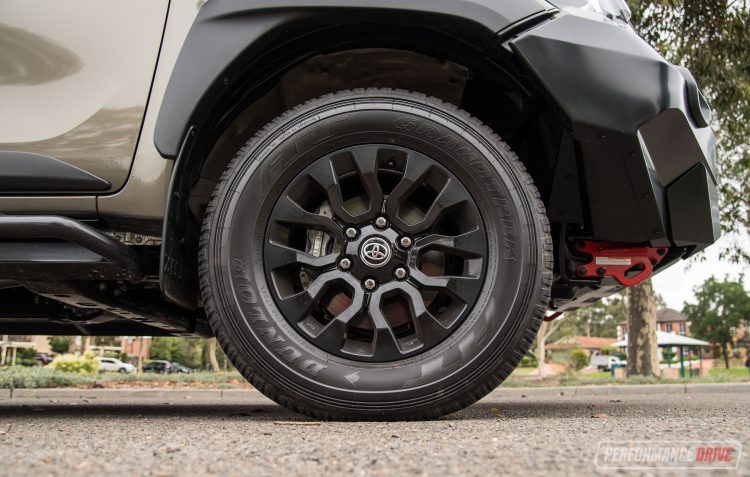 Around suburbs, it’s actually a very pleasant vehicle to drive. Visibility is of course outstanding thanks to the perched-up stance and high ground clearance, while the steering and brakes feel light and very car-like. One of the major contributing factors to this calm on-road experience is the updated engine.

Before, the 2.8-litre turbo-diesel produced 130kW and 450Nm. Now, that has been wound up to 150kW and 500Nm. This was all possible with the introduction of a larger turbocharger, higher-flowing injection, and enhanced cylinder head and engine internals. Some cooling improvements are also administered. These outputs put it near the very top of the class for a four-cylinder diesel. And it’s about time.

However, even with the older tune we always found the engine was very refined and quiet out on the road, and it presented decent fuel economy. It was just when you wanted prompt acceleration, such as during overtaking, that the engine revved but kind of sat in limbo land while the speed gradually climbed. Now, it behaves much more like a regular passenger car.

You can feel that 500Nm of torque pushing you into your seat. Okay, not enormously, but enough to make a difference to your progression. You can now overtake on the highway, at highways speeds, and actually get passed in reasonable time. There’s a definite surge to be felt, unlike before. 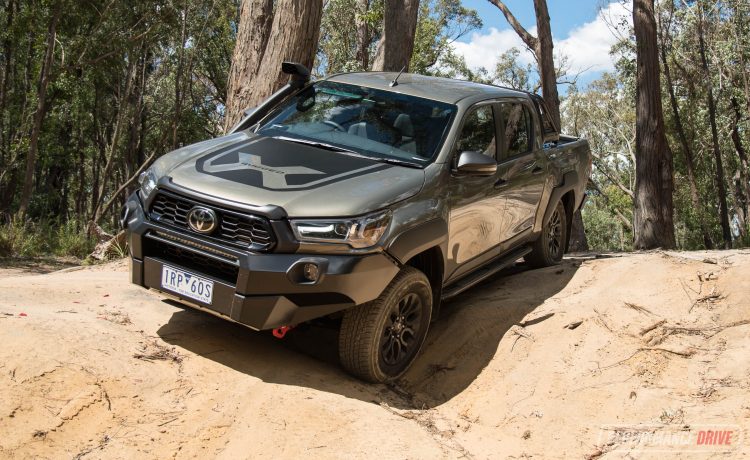 Instead of trying to explain it we’ll just turn to our handy Vbox so it can clearly outline the differences. In the old Rugged X auto we clocked 0-100km/h in a yawn-inducing 12.41 seconds. In this 2021 model, we managed 10.03 seconds. We also saw 0-60km/h improve from 5.17 seconds to 4.52 seconds, and 60-110km/h dropped from 9.55 seconds to just 7.51 seconds. That latter figure in particular reflects the big improvement in overtaking performance that we were talking about. It’s a solid and noticeable improvement all round from this engine update. 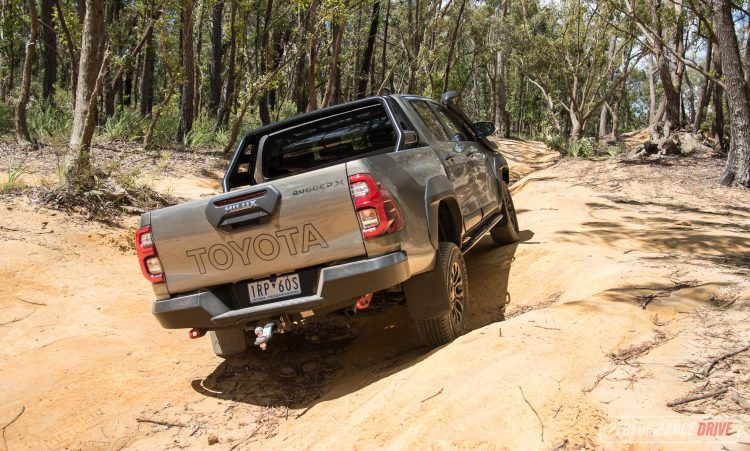 Speaking of which, the off-road performance is excellent. Thanks to the deep cutaways in the front corners with the special bull bar, the approach angle when turning is outstanding. Those heavy-duty rock rails/side steps, which feature triangular reinforcements underneath, provide solid protection if you stretch past the 236mm of ground clearance as well. And then the steel rear bumper bar is obviously a lot more forgiving than the standard plastic item.

The Rugged X comes with a locking rear differential for those really tricky situations, just like the SR5, and you can of course engage low-range for even greater off-road capability. During our test, in conditions which we think most owners will be willing to take on, the HiLux performed flawlessly. The rear diff lock really comes in handy during axle articulation, pulling you through by ensuring no single wheel wheelspin at the back.

All of the driving modes are easy to engage and understand, and there’s a range of symbols and lights on the dash that clearly show what mode you’re in. In terms of user-friendliness, the HiLux is a cinch to master even in tricky circumstances.

To be honest, the SR5 does almost everything the Rugged X does. The Rugged X really only stands out when you subject it to quite serious off-road situations. As mentioned earlier, if you don’t think you’ll be taking part in very serious off-roading then the SR5 will easily meet your needs and expectations. However, the one thing that could be important to you is the look, or at least the idea that you could do serious stuff even if you don’t necessarily want to. 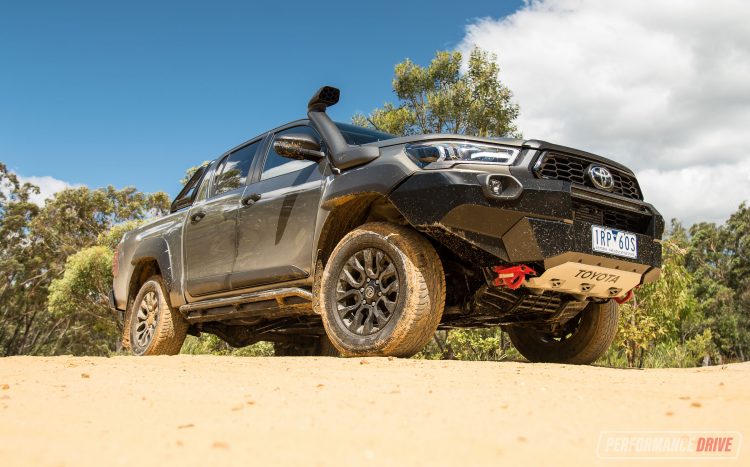 We think it is important to note that the enhancements made to the Rugged X are fully covered by Toyota’s warranty and meet ANCAP’s five-star safety standards. This won’t be the case with many of aftermarket parts that are out there. So in that sense, if you are looking to buy a dual-cab ute and plan to spruce it up with some heavy-duty gear, the Rugged X is a smart way to get straight into a turn-key package.