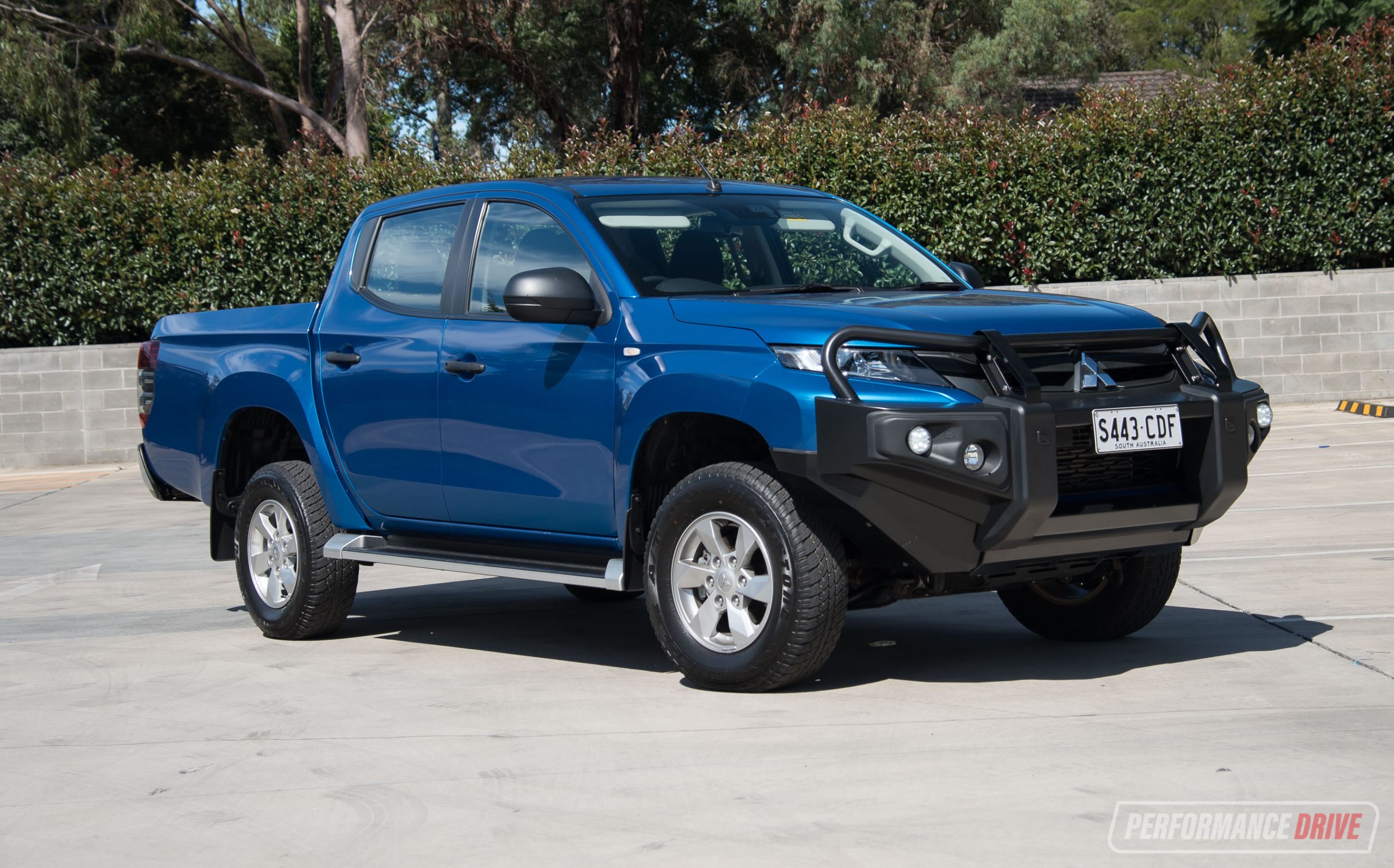 How complicated and flooded has the dual-cab ute market become? It’s crazy. And it makes it very difficult to know which model is best for your needs. The 2021 Mitsubishi Triton GLX+ could be the perfect middle ground as it presents good durability and off-road capability, decent performance and standard features, and all from a very attractive price. 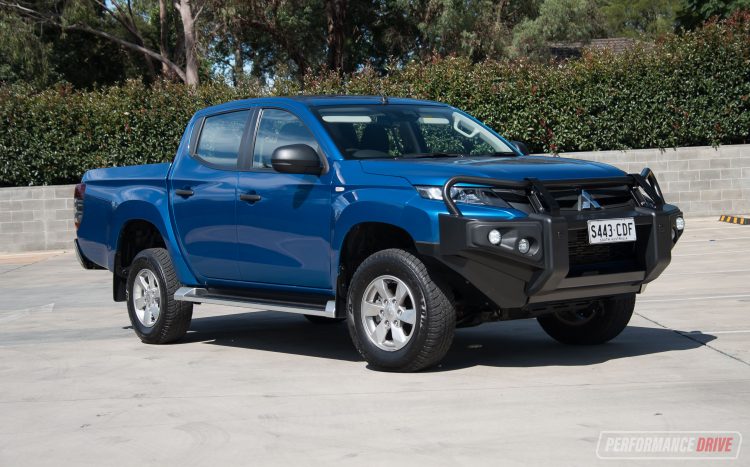 The GLX+ is, as the name suggests, an extension of the regular base model GLX. For example, it gets the rear diff lock usually reserved for the GLS (not included on the GLX), but misses out on the centre diff lock and Super-Select 4WD-II part-time four-wheel drive system. Instead, it features the Easy-Select 4WD system, with high and low range.

Power comes from a 2.4-litre turbo-diesel four-cylinder, developing 133kW and 430Nm, shared across the range. These outputs are starting to fall behind the competition, particularly as many rivals have recently undergone major updates. The towing capacity is 3100kg for both the manual and six-speed auto, with a 945kg payload (950kg for the manual) – some of the key rivals hit the maximum 3500kg braked towing capacity.

Prices for the dual-cab GLX+ start from $42,690 for the manual, and from $44,490 for the auto (excluding on-road costs). These are appealing prices compared with plenty of the equivalent-spec rivals. According to the current Mitsubishi website (at time of writing) the GLX+ dual-cab auto is being offered from $43,690 drive-away, representing incredible value. 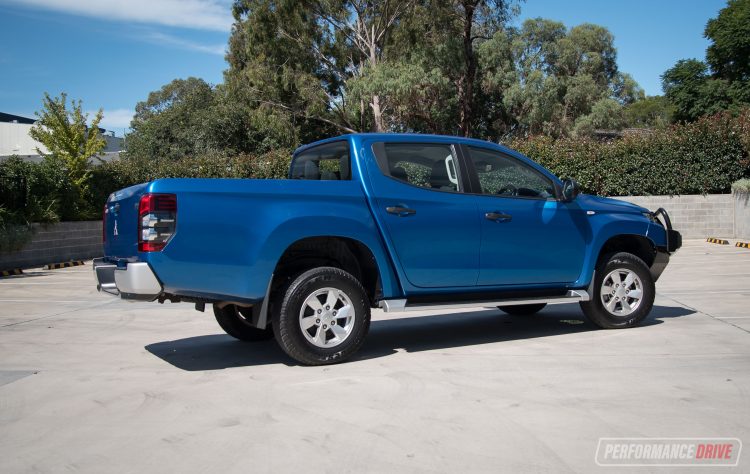 Inside, this is a fairly bare bones model. After all, the GLX+ is based on the entry-level trim. Two-tone seats help to spice up the atmosphere, and the company’s latest 7.0-inch touch-screen, shared with the flagship GLS, is an attractive inclusion considering its position in showroom hierarchy.

The general design and ambience of the cabin is a bit basic and showing signs of age in our opinion. For example, some of the ordinary rectangular-shaped buttons have been around for years now, and the crude digital display within the analogue instrument cluster is probably beyond its used-by date. 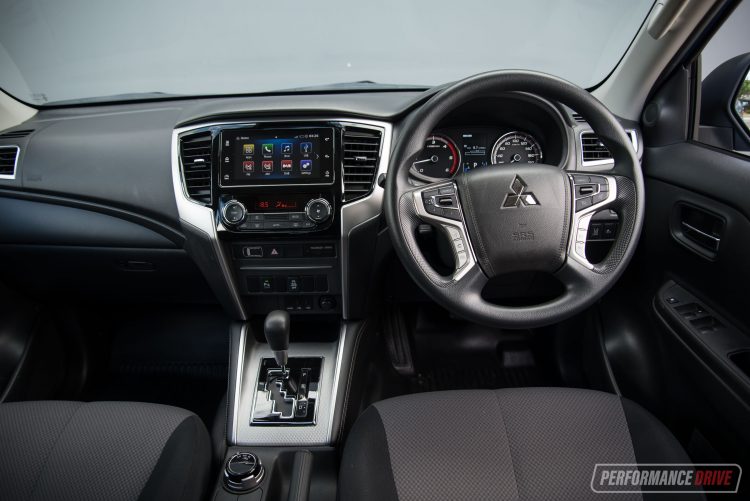 Overall practicality and space is good though, with lots of storage options around, including a centre console box, twin cup holders, and bottle holders in the doors. Passenger room certainly meets the class standards as well, and the driving position is about average – most dual-cab utes are not ergonomically ideal.

It’s great to see ceiling-mounted climate vents in the back, as some competitors don’t even feature a single vent in the back of the centre console. There are no charging facilities, unfortunately, but a flip-down centre arm rest with cup holders is a bonus for an entry model. Legroom is ok for this class too, and headroom is respectable so long as you don’t bump your head on the way in. 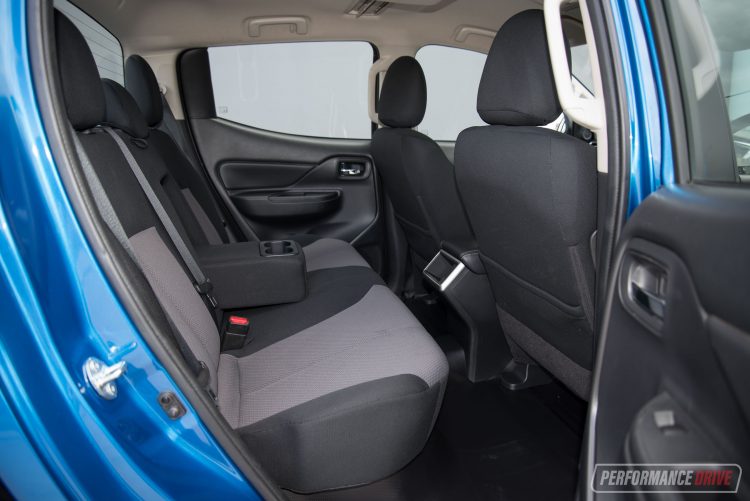 Going for the GLX+ gets you a durable plastic floor. This is a must if you’re intending on taking regular off-road trips, or simply if you’re a busy worksite worker, always jumping in and out of the car. This example also shows off one of the genuine bull bar options, which integrates aesthetically with the front end design and opens up the corner approach angle.

In the back you have a 945kg payload capacity (950kg for the manual), which stacks up pretty well against most rivals. You can opt for a moulded tub-liner to protect the paintwork, as seen here, and sports bar options are available. The Triton also offers a braked towing capacity of 3100kg, which is down on the segment limit of 3500kg. 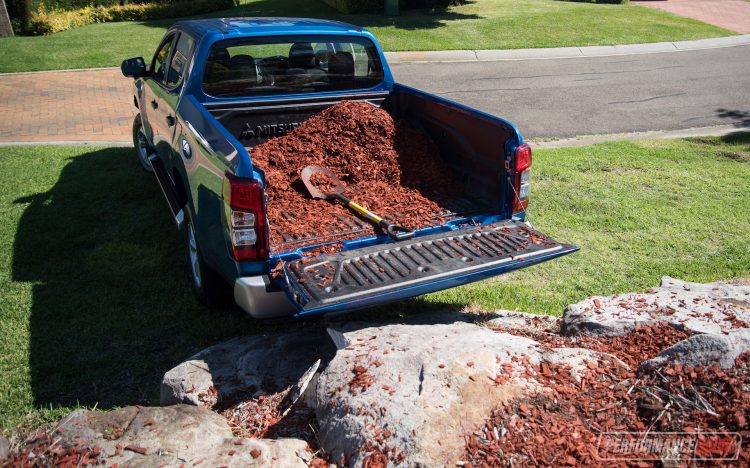 Unlike the regular GLX that comes with steel wheels, the GLX+ features 16-inch alloy wheels. These are wrapped in all-terrain tyres, measuring 245/70. The tyres are great for off-roading, and they aren’t overly wide which can benefit certain conditions. But, they are not so good for on-road grip or braking performance. During our tests the best 100-0km/h emergency stop we recorded, using a Racelogic Vbox, was 42.49 metres. Most passenger cars, under very similar conditions, pull up well under 40 metres, and some dual-cab utes hover around the 40-41 mark.

You won’t be asking for more lateral grip on the road, though. Despite being all-terrain, the tread pattern seems to be perfectly suitable for everyday errands, and they don’t roar loudly on higher-speed highways. With a very tall side profile, the tyres do offer a degree of enhanced ride comfort, and it means your other half can’t really scratch up the rims on Maccas runs.

Underneath all Triton variants is a common live axle rear end with leaf springs, and an independent double-wishbone front. It’s definitely a heavy-duty setup, so you shouldn’t expect Mercedes S-Class levels of refinement and soothing comfort. As a result the rear end can jitter about a bit when the tray is empty, but overall it’s not as bad as some in this space. 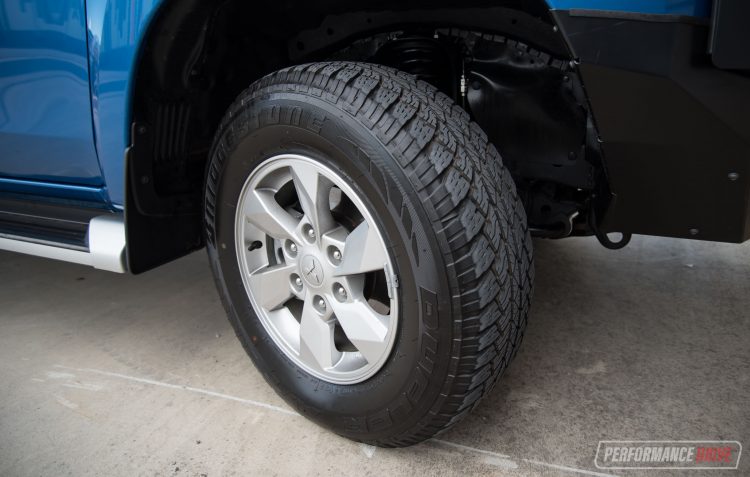 On the road, the Triton handles day-to-day demands reasonably well in terms of maintaining body control and feeling sturdy and stable. It is a very long vehicle, measuring 5305mm in fact, which means it can be difficult to thread around tight, inner-city conditions and during parking. Of course you do eventually get used to it, but we have found some rivals seem more at home in such conditions. Mitsubishi has tightened up its steering gearbox in recent years so now you don’t have to dial in as many wheel rotations to go from lock to lock. Even still, there are some rivals that offer a more responsive setup.

Obviously with less sensitivity, this is ideal off the road as there is less likelihood of kick-back over ruts and you don’t have to be so precise with the wheel during really technical terrain. Ground clearance is rated at 205mm, which is pretty poor for this class, and the departure angle of 22 degrees isn’t good either. However, the approach angle of 30 degrees is decent.

As for the engine, it provides decent performance. Especially as the outputs are starting to fall behind the more modern rivals. We clocked 0-100km/h in 10.22 seconds, or better than average for the class judging by our extensive results database. The six-speed auto should probably be swapped out for the eight-speed from the Pajero Sport by now, as this might help with performance and economy. Engine noise is reasonably well suppressed, and once up to speed, it hums along with faint diesel clatter. 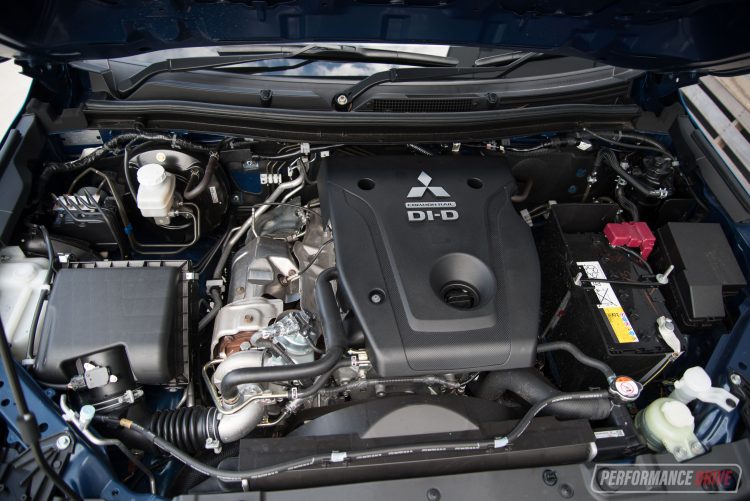 With a 75-litre fuel tank and an official average consumption of 8.6L/100km, the theoretical average range is 872km. There are other utes on the market that offer more range, in same cases due to a larger tank but also due to a lower official consumption figure. For example, the Toyota HiLux SR 4×4 dual-cab auto features an 80L tank and a fuel economy figure of 7.9L/100km, translating to a theoretical range of 1013km – the reason we singled out the HiLux is because it is the most popular in the segment.

In the real world, we recorded an average consumption of 8.7L/100km in this test vehicle. That included a mix of driving conditions, such as some highway stuff and performance testing. We also did a few trips to a garden centre to pick up a few loads of bark chips, which added around 200-300kg in the tray. This sort of consumption rate is good for this class, with some of rivals, although more powerful, consuming more in the real world during similar tests. 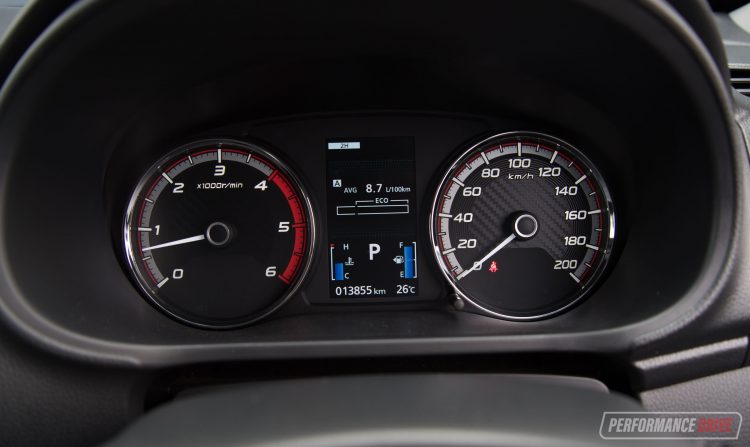 It is a decent all-rounder, but there are some elements that are falling behind the rivals; the engine output, fuel economy (although quite good in the real world), and some design cues, in particular. But, and it is a big but, the price tag is just so appealing. Especially from a well-known, firmly-established brand that has decades of experience building heavy-duty vehicles and workhorses.

To get into a HiLux, Ranger, D-Max, Navara, or BT-50 of similar spec and trim level, you’re looking at around $50k. For that reason, the Triton is easily our pick of the ‘cheaper’ dual-cab utes.