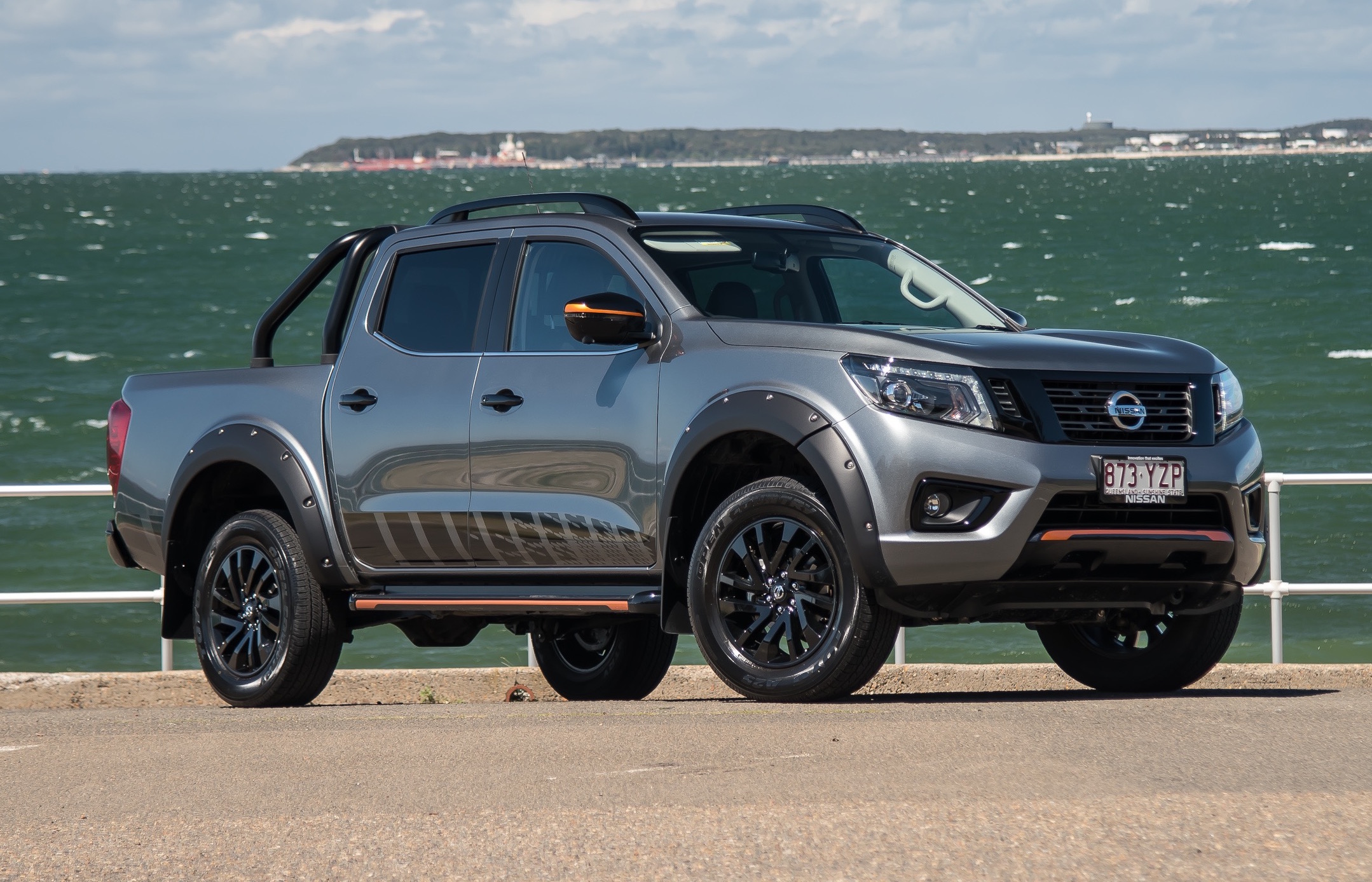 Before Nissan Australia goes all nuts-out with the N-TREK Warrior hardcore 4×4 Navara, the 2019 Navara N-TREK has been introduced as a neat intermediate step. Is it enough to keep buyers tempted? Let’s have a look. 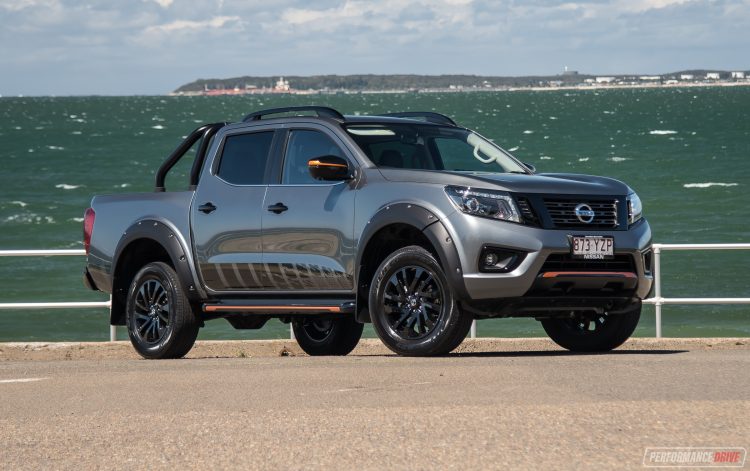 The N-TREK is a temporary flagship model, a special edition, based on the ST-X. As you can see, there are a number of cosmetic enhancements to give it a distinguished look and feel. The Navara NP300 generation, in our view, is already one of the more handsome propositions in this class. And the N-TREK gradually turns up the fashion dial.

Only two versions are available in Australia; the manual and auto. Here we’re testing the auto, which retails from $58,950 (excluding on-road costs). You can save yourself 2500 bucks by changing gears yourself. 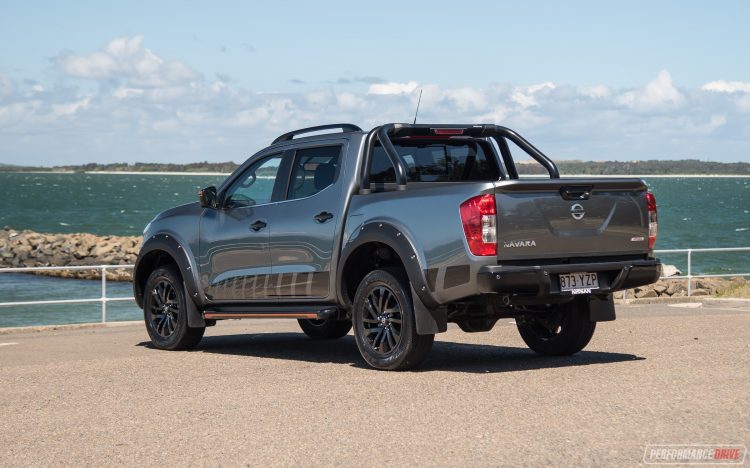 Based on the Navara ST-X, the N-TREK adds some spice to the in-car atmosphere with the introduction of some orange highlights. You’ll easily spot the orange and black leather- and fabric-wrapped seats, with orange contrast stitching for that instant boost in whatever wow factor a ute could possibly provide. The driver’s seat is power-adjustable too so it’s simple to find the optimum driving position.

Speaking of driving position, the Navara’s layout isn’t perfect. And that seems to be the theme with most of these dual-cab 4×4 utes at the moment. The steering column only offers tilt adjustment, and for this driver (about 170cm), it feels like you need to have really long arms but very short legs. If the column could be pulled out it would be more consistent. Well, with my body dimensions anyway. Headroom is respectable though and there are cup and bottle holders, and somewhere to chuck your phone. 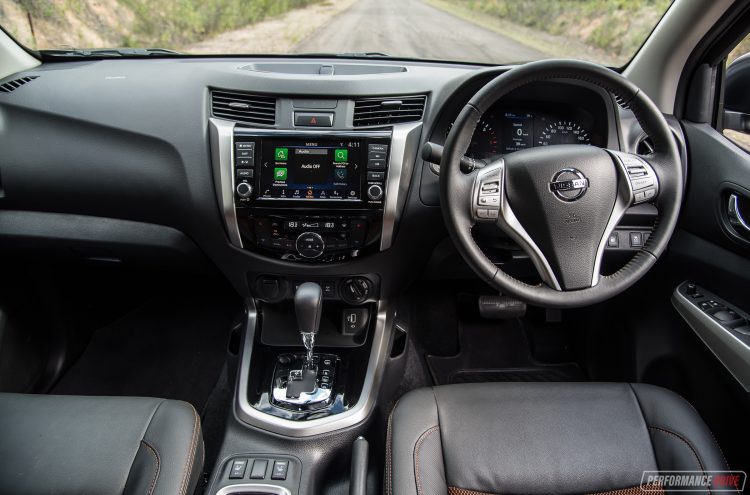 Rear seat accommodation is pretty good, and it’s great to see Nissan has gone to the effort of providing climate vents in the back of the centre console. Although most vehicles with rear seats do have venting underneath the front seats, the vents on the back of the console are adjustable so passengers can direct the air where desired.

Unfortunately, there is no flip-down centre arm rest with cup holders. Both rear doors do have bottle cavities, and there’s that added novelty of being able to slide open a portion of the rear windscreen (button operation is at the front). 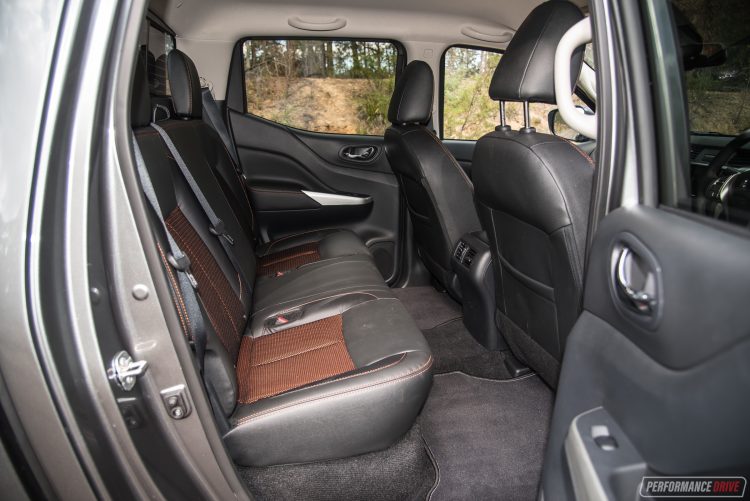 Nissan has finally updated the touch-screen media interface for 2019. It’s an 8.0-inch ‘Alliance In-Vehicle Infotainment’ system, which basically means it could be used in any Renault-Nissan-Mitsubishi group vehicles.

We think it is significantly improved over the old system, primarily because the menu layout and navigation is much easier to fathom. The system also packs modern tech, such as Android Auto and Apple CarPlay, and in the N-TREK you get in-built sat-nav and a surround-view parking camera system. 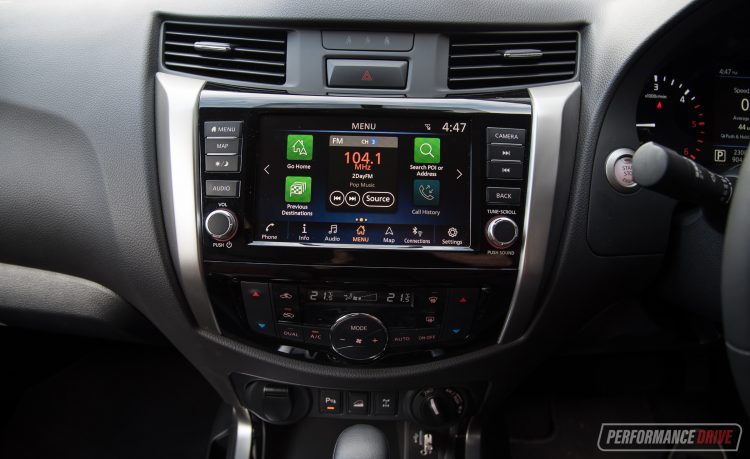 Although it’s not the plushest or most advanced cabin in this segment, the Navara is well laid out, practical and offers good fit and finish with no annoying squeaks or rattles. With the orange accents the environment is livened up but not overcooked, in our opinion.

As for the exterior package, the N-TREK edition brings in some obvious darkened highlights. We’re talking a black grille, black alloy wheels, special side steps and side mirror covers with little orange highlights, and a black sports bar in the back. There’s also black plastic wheel arch extensions. It all looks good we think. Actually, the only aspect of the aesthetics that we don’t like are the way the wheel arch extensions leave a big step in before the wheel and tyre. It kind of looks like it skipped leg day at the gym. 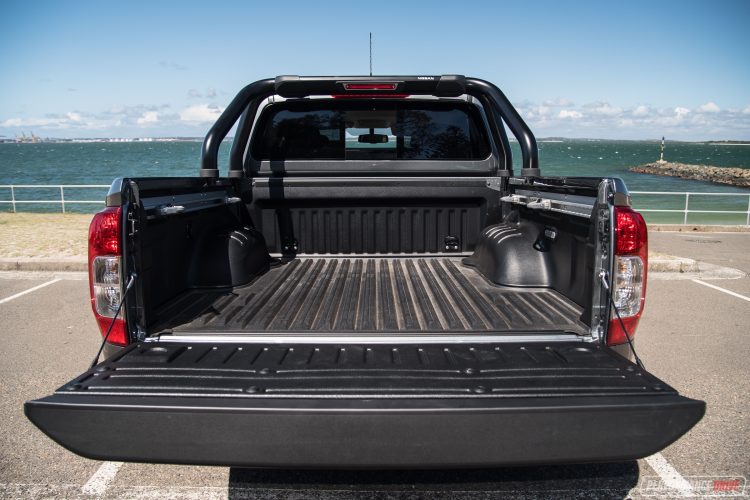 There are no changes to the powertrain for the N-TREK. Instead, it continues with the same part-Mercedes-Benz-developed ‘YS23DDTT’ 2.3-litre twin-turbo four-cylinder diesel. Under full throttle it achieves 140kW at precisely 3750rpm, however, a chunky 450Nm of torque is spread between 1500-2500rpm. At these output levels it is positioned perfectly within the stronger end of the class.

Across 0-100km/h we clocked a best time of 9.99 seconds. That’s a good sprint for a dual-cab diesel 4×4, according to all of our rival tests. Overtaking performance is also worth of a little head-nod and bottom lip raise. Like most engines in this class, heavy-duty durability has a higher priority over quietness and refinement. So as you would expect, there are rattles in typical clattering diesel fashion. But you can hold a conversation in the cabin without raising your voice. Well, so long as you aren’t talking while flattening the throttle. 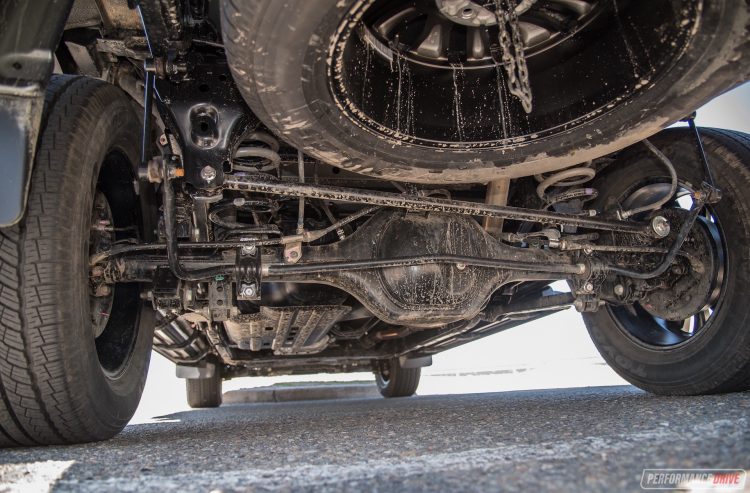 We like the concept of this engine, with twin turbochargers and whatnot. The unit also seems to work really well with the seven-speed auto transmission. Unlike some of the rivals with a six-speed auto, the first few gears here seem punchy, helping the vehicle gallop and gather speed. It’s not the quickest-shifting transmission in the segment, and it doesn’t immediately respond to manual shifting. In saying that, there aren’t many situations where this will cause any frustration considering it’s not a sports car.

On-road refinement and chassis dynamics are impressive. It turns in with acceptable levels of body roll, and the steering is relatively tight and short-ratio. It’ll hold its line around big sweeping bends, too. Part of this is thanks to the coil-spring rear suspension setup. This also provides decent comfort, particularly and obviously for those in the back. Those after an outright heavy-duty arrangement will need to turn to some of the rivals that come with leaf springs. 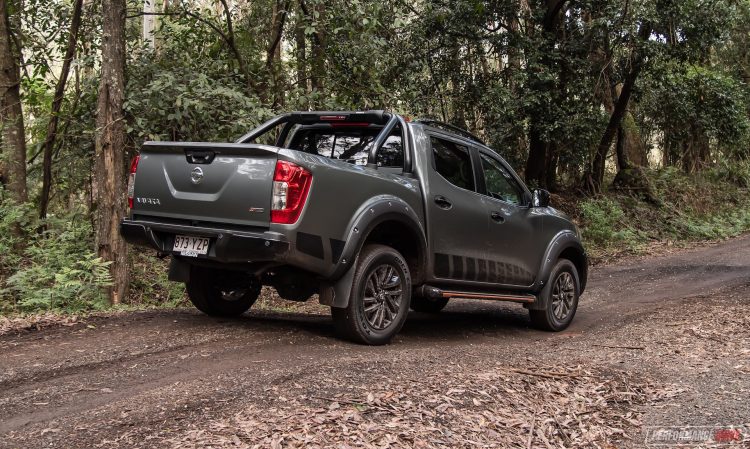 The maximum braked towing capacity is rated at 3500kg, and the payload is 917kg for this variant. What’s most important though is the gross combination mass, which is marked at 5910kg. For example, the kerb weight is 1993kg, leaving 3917kg for passengers, payload and towing. This compares well against the segment’s best-seller, the Toyota HiLux. The similarly-equipped HiLux SR5 dual-cab auto offers 3605kg of leftover allowable mass; 2045kg kerb weight with 5650kg gross combination mass (3200kg max towing, 955kg payload).

Off the beaten track, the Navara is a very respectable performer. You have an on-the-go rear-wheel drive and four-wheel drive selector, while low range must of course be selected when stationary. There’s also an electronic locking rear differential, and a brake-type limited-slip diff when the locker is not engaged. Although there are no specific improvements to off-road capability with the N-TREK, the black plastic wheel arch extensions do give you an extra buffer zone before objects can get close to the paintwork. 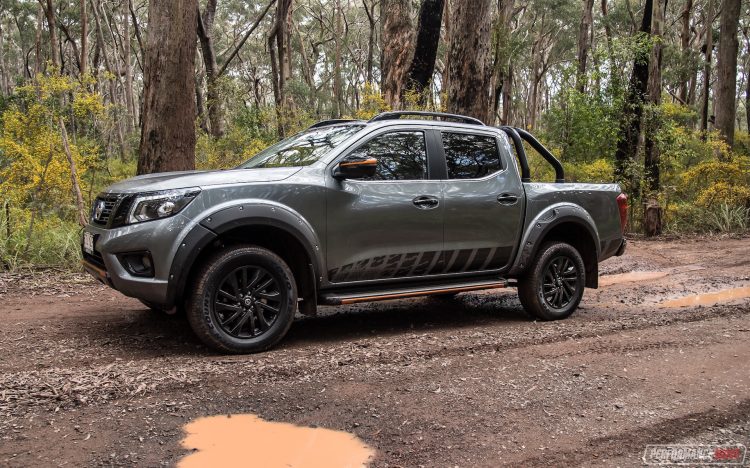 If there’s a mild to moderate off-road track on the way to your favourite camping or fishing spot, we reckon the Navara will get you through with very little issue. During our test the N-TREK provided us with lots of confidence, and never skipped a beat. The rear locker, especially, comes in handy during really sticky conditions.

If we were to recommend any enhancements for you or Nissan to apply, we’d suggest some sturdier metal side steps for the special edition, like what is featured on some ‘black pack’ rivals. A nudge bar might also assist the more serious off-road enthusiasts. We guess there’s always the upcoming, Aussie-engineered Navara N-TREK Warrior for that – scheduled to hit the showrooms in December.

Yes, it is essentially a ‘sticker pack’ with no major or fundamental enhancements. However, it is a precursor to the upcoming rough-and-ready N-TREK Warrior. And for those not really interested in serious hardcore off-roading, we think this N-TREK is a cool special edition; there’s a degree of added excitement and exclusivity over the regular ST-X, which is a commendable product as it is.

As for the Navara in general for 2019, it does remain as one of the quickest four-cylinder diesel 4×4 utes on the market, if that’s important to you. The engine is also surprisingly fuel efficient, with an official average of just 7.0L/100km in auto form. We like the design and the proportions, and the updated touch-screen does wonders for the overall package.

If we were in the market for something like this, there’s no doubt it would be high on our shortlist. We like the overall packaging, and the balance between practicality, capability, and refinement.

CONS:
– Engine could be more refined and quieter
– No reach adjustment for steering column