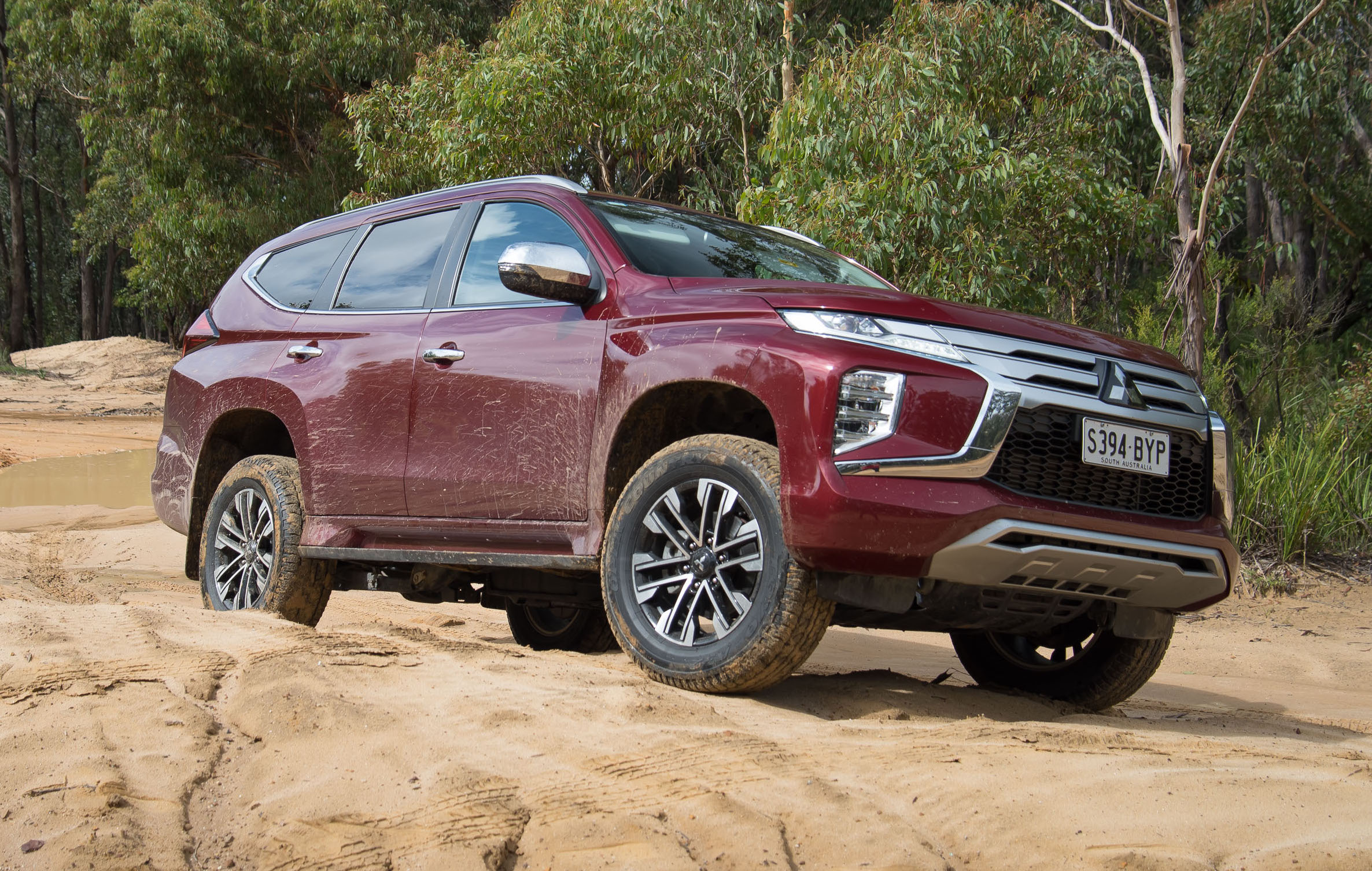 Mitsubishi’s rugged and relentless Pajero Sport has been around now since 2015, with only some tech and safety updates introduced along the way. Is the 2021 version modern enough to keep up with the recently-evolved rivals? 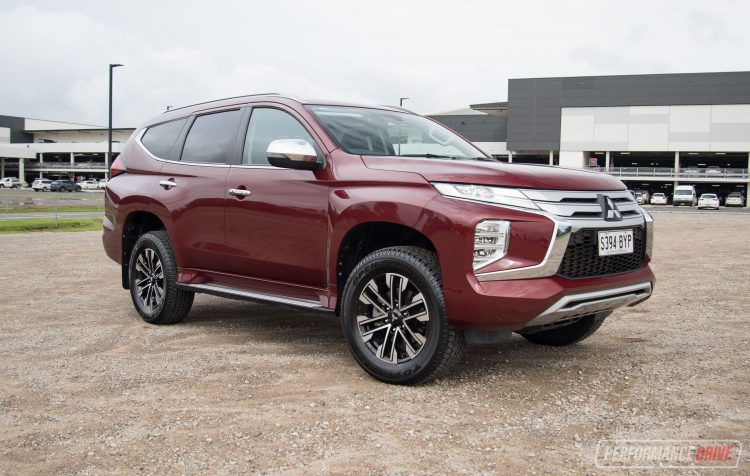 The Pajero Sport has always been highly regarded among off-road enthusiasts and outdoorsy adventurer types thanks to its expansive cabin and boot area, user-friendly controls, and good reliability and warranty. It’s one of only a few serious ladder-frame seven-seat SUVs left in its class, with full dual-range part-time four-wheel drive running gear.

For the 2020-2021 model Mitsubishi has applied a mild facelift to the design, and brought in a new touch-screen inside, as well as updated some of the safety tech. You can get it in GLX form (5-seat only), GLS (5- and 7-seat), and flagship Exceed (7-seat only). Here we’re testing the 7-seat GLS, which is priced from $52,240 (excluding on-road costs).

Although you can get the GLX from $47,490, the price of this GLS doesn’t stack up that well against the key rivals. The equivalent mid-spec Toyota Fortuner GXL 4×4 auto (7-seater) starts from $50,790, for example, and it features a newer and much more powerful/torquey engine. The Isuzu MU-X LS-U 4×4 7-seater, though, is priced from $53,600.

Mitsubishi does provide an industry-leading 10-year warranty, which is where paying the extra dough starts to make sense. Toyota offers a 5-year/unlimited kilometre warranty, and the Isuzu MU-X is covered by a 6-year/150,000km warranty. 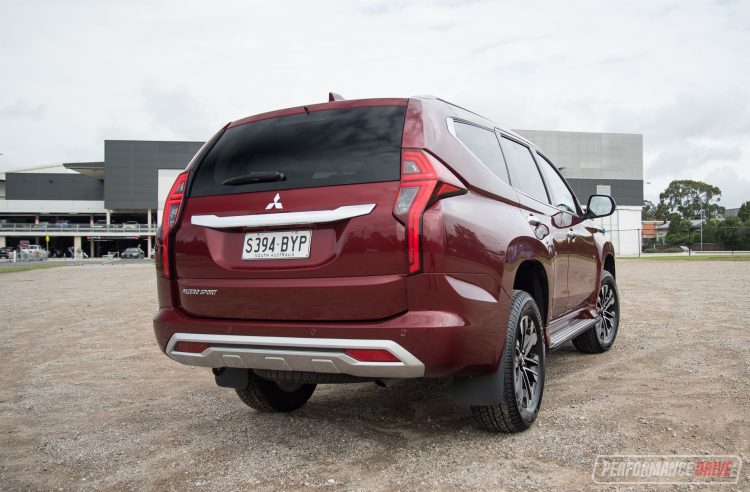 It’s hard to spot the design differences over the 2018-2019 model, with the new front light cluster and perkier cheekbones being the main clue. The rest of the body looks more or less the same. Look a little closer and you’ll spot the new-look alloy wheels, revised front grille with tiers that are smoothed/smudged over, and the central rear bumper trim is updated. Mitsubishi has also fitted modern LED taillights with a unique twin-line pattern inside, complete with darkened surrounds.

The interior is ageing quite well in our opinion. Yes, some of the buttons are a bit basic in design, and the tiny digital screen within the instrument cluster is out of date, yet most of the materials feel good and there is a general high quality character. You get soft leather for the seats and supportive cushioning, some piano black garnishes, and plenty of matte finishes for that contemporary look. There’s also a new 8.0-inch touch-screen on the dash packed with Android Auto and Apple CarPlay, digital radio, and sat-nav. 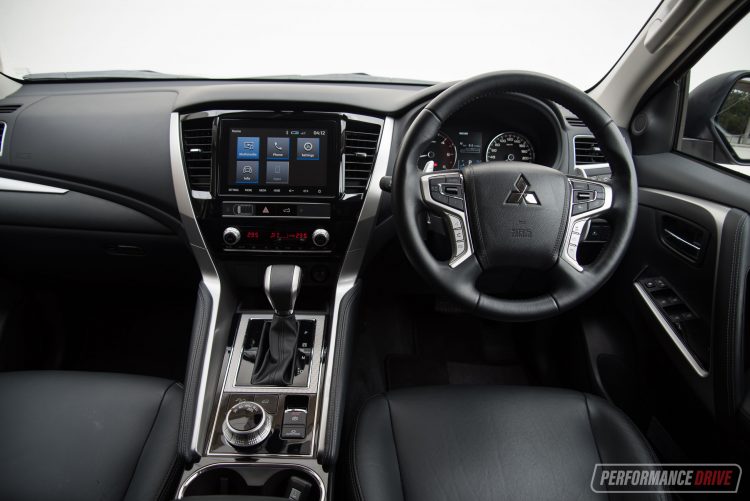 Some really thoughtful measures are included, particularly for families looking to do some serious travelling. The GLS features loads of charging ports, first and foremost. There’s a couple in the front and a HDMI input, and then a USB-C, USB, and 220V household socket in the middle row, and then another 12V outlet in the third row. Climate vents are mounted in the ceiling for all three rows, and middle-row legroom and headroom is excellent.

Accessing the third row is pretty easy thanks to the flip-and-fold middle-seat mechanism – albeit a bit heavy – but it would be nice to see slide adjustment for the middle row so you can apportion legroom between the middle and third row as needed. It is great to see twin cup holders in the third row, and legroom is ok back here while headroom is quite good compared with some rivals. 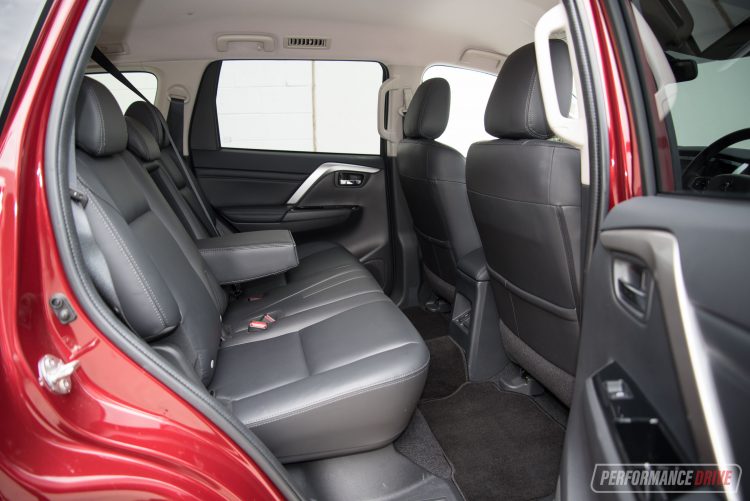 With the third row in place you’re left with 133 litres of boot space. The seats do pack away completely flat into the floor so you can really utilise what’s available. The Pajero Sport’s naturally tall and upright stature means you can pack in some substantial items. There is a handy storage box underneath the floor too, which is perfect for wet or muddy gear. 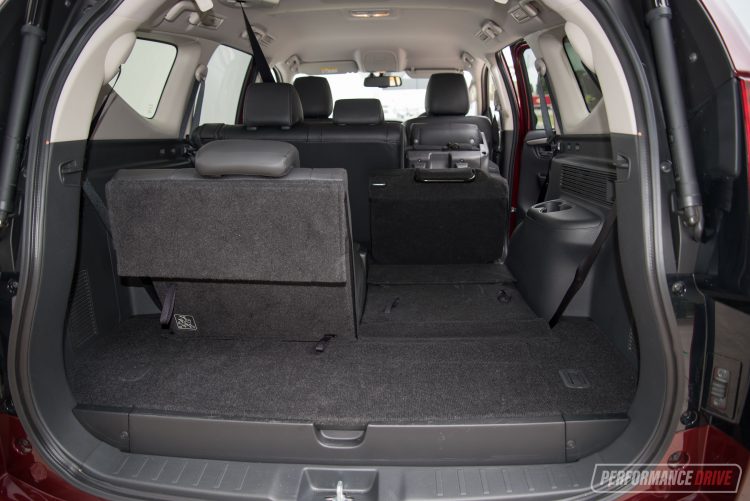 No changes are made under the bonnet for 2021. There remains a trusty 2.4-litre turbo-diesel four-cylinder. It produces 133kW at 3500rpm, and 430Nm at 2500rpm. This is matched to an eight-speed auto transmission.

With a 68-litre fuel tank and an official average consumption of 8.0L/100km, the theoretical average range is 850km. That’s not ideal if you’re planning on doing some proper exploring around the country. Some equivalent rivals do better. The Toyota Fortuner GXL auto offers a theoretical range of 930km thanks to its 80L tank, while the Ford Everest Sport 2.0TT 4×4 offers 1143km from its 80L tank. However, the Mitsubishi does more than the Isuzu MU-X LS-U auto, with its 63L tank offering a range of just 623km. 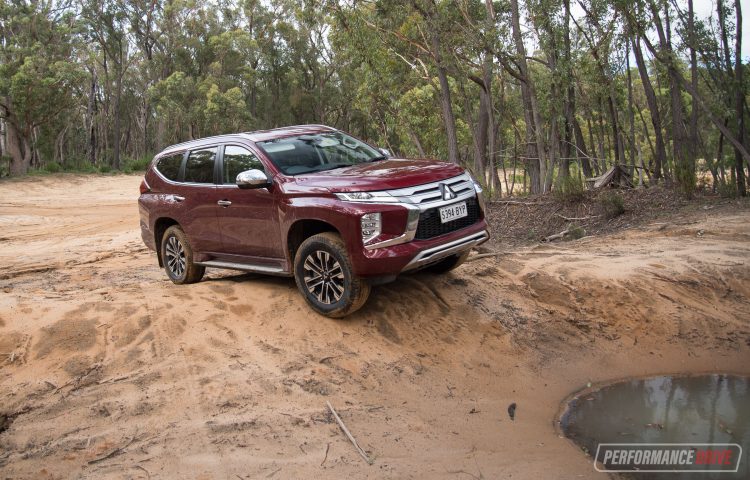 Obviously this is all on-paper and in the real-world fuel economy figures are almost always very different. Interestingly, we averaged 9.0L/100km during our week of testing. That’s not too bad at all, especially considering our test included full-throttle performance testing (around 4-5 quarter-mile runs). We also did some off-roading which usually causes a spike in fuel consumption due to higher rolling resistance and the heavier reliance on lower gears.

Speaking of performance, the Pajero Sport has always offered respectable figures for this class and its intended purpose. However, it seems the formula is starting to slip behind the rivals. For example, the Isuzu and Toyota mentioned above produce more power and torque thanks to some recent hardware updates, and the Ford Everest 2.0TT trumps them all. That’s because this 2.4-litre engine has been around now in basically the same form since 2015, debuting in the Triton and first Pajero Sport. 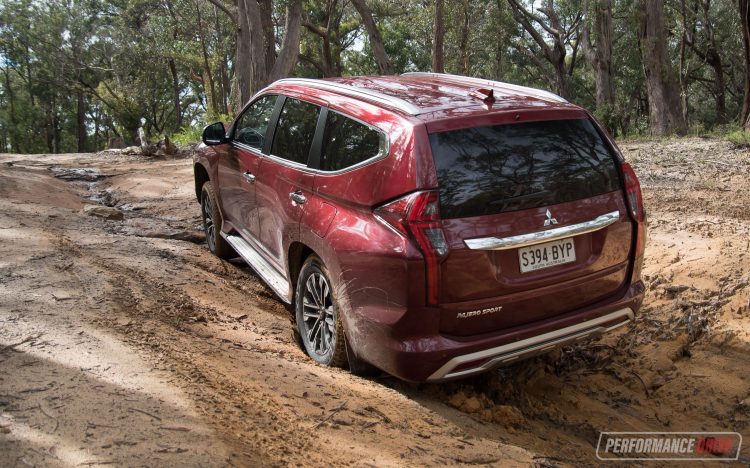 Despite its age the engine is surprisingly refined and quiet, especially once you’re off the line. During cruising you can barely hear it, with none of that off-putting diesel clatter to be heard. It just smoothly hums along. Matching well with this is its absorbent ride thanks to coil springs at the back (unlike leaf springs in the platform-sharing Triton). Mitsubishi has also done some work over the years to reduce the sheer amount of turns lock-to-lock for the steering, so it’s now less of a truck in tighter conditions.

Out in the bush this remains a top-notch explorer and all-terrain conquerer. It really loves getting down and dirty in the rough stuff, seemingly walking over obstacles, deep ruts, and rocky tracks with no hesitation. And that’s despite a pretty average departure angle of 24 degrees. The 30-degree approach angle is impressive though, and although 218mm of ground clearance doesn’t seem like much, the positioning of the components underneath and the heavy-duty drive system is what really pulls you through. The GLS comes with centre and rear differential locks for those seriously unforgiving situations.

If you’re in the market for a family-friendly 7-seat SUV, you’re in luck. There are plenty of highly-recommendable options available at the moment. And, to be frank, the fleet of modern crossover-style models that are all the craze at the moment will accommodate and perfectly fulfil the majority of buyers’ needs, without needing to even glance at heavy-duty options like this.

However, if you are planning on hitting dirt tracks and finding those secluded camping spots, then the Pajero Sport is one you should thoroughly consider. While it is starting to lack in the area of engine performance and technology, it goes some length in making up for that by offering refined highway motoring and an unignorable 10-year warranty.

PROS:
– Impressive off-road preparation and capability
– User-friendly and thoughtful cabin amenities
– Soft and comfy seats, with good passenger space in the back
– Tall boot area comes in handy, and wet-gear under-floor storage
– Quiet and refined highway driving (for a proper 4×4)

CONS:
– Powertrain performance starting to fall behind key rivals
– Price should come down a bit considering its age
– Still hard to admire the design; awkward angles and very tall and upright