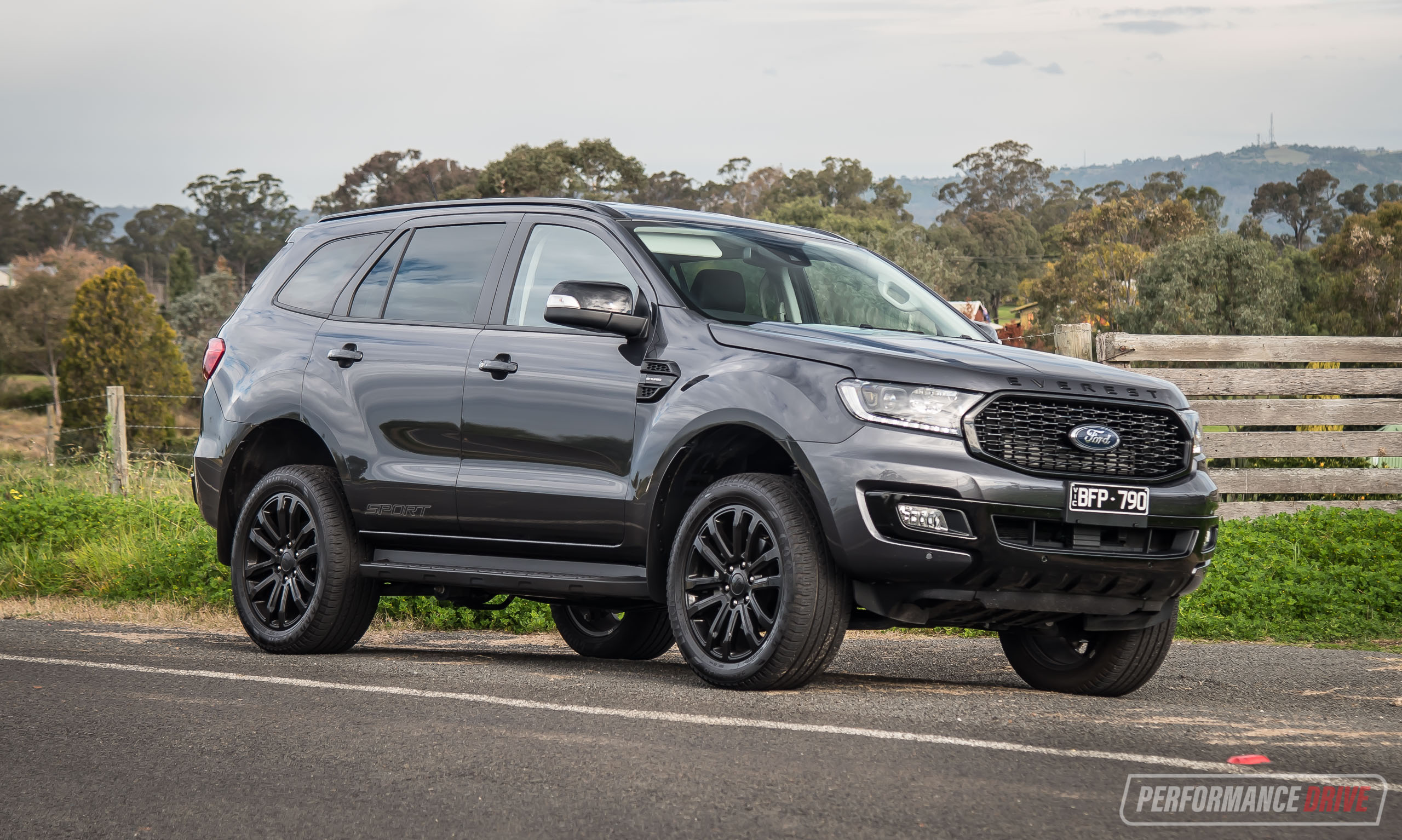 The Ford Everest was first introduced in 2015 to fill the large SUV shoes left by the locally-built Ford Territory. Since then, Ford has reinvigorated the Everest with a new engine and a new variant, the Sport. Although getting long in the tooth in its model run, the Everest still has lots to offer if you’re in the market for a large, seven-seat SUV that supports rugged outdoor adventures. 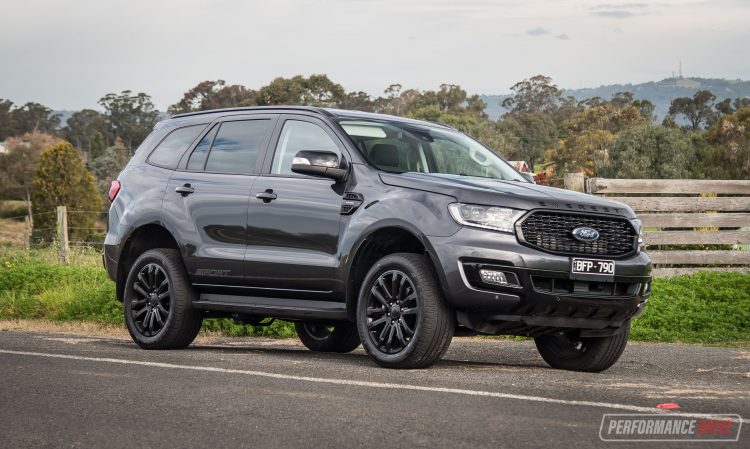 There are two engines to pick from; a 3.2-litre turbo-diesel five-cylinder that produces 143kW of power and 470Nm or torque. It pairs with a six-speed auto transmission. The more advanced alternative that we’re testing here is a 2.0-litre twin-turbo diesel four-cylinder, paired with a 10-speed auto gearbox. The Sport variant comes with full-time four-wheel drive only, but there are rear-wheel drive options lower in the lineup.

The existing lineup still stands, which starts with the Ambiente, then the Trend, and at the top, the Titanium. The new Sport slots itself just under the flagship. Prices begin at $50,090 for the base model, with the Sport seeing the price tag stretch to $64,390 (plus on-road costs). Opting for the 3.2 engine saves $1500. 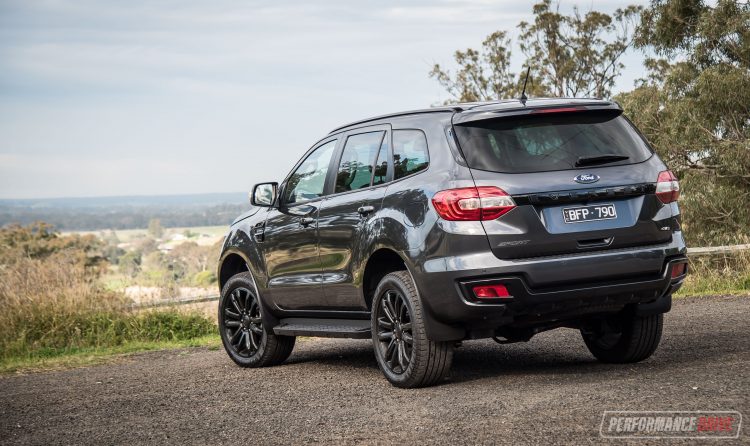 Unlike many SUVs that are not really oriented for off road driving, the Everest is. It shares the same underpinnings as the tough Ford Ranger ute. It also resembles some of the Ranger’s design elements. But the Sport variant takes a giant leap to lift itself from an ageing shape to look much more sporty and fashionable. Most notably, there are contrasting black trimmings plotted around the exterior. We think the matching black window surrounds, wheels and roof rails add loads of flair.

Kudos to Ford for making a model that has been out for five years to look reasonably modern inside, too – for a rugged SUV. In the Sport you’ll find glossy black panelling, an elegantly dark interior theme with black leather seats, and blue stitching in the front row, with contrasting chrome outlines for that stylish touch. 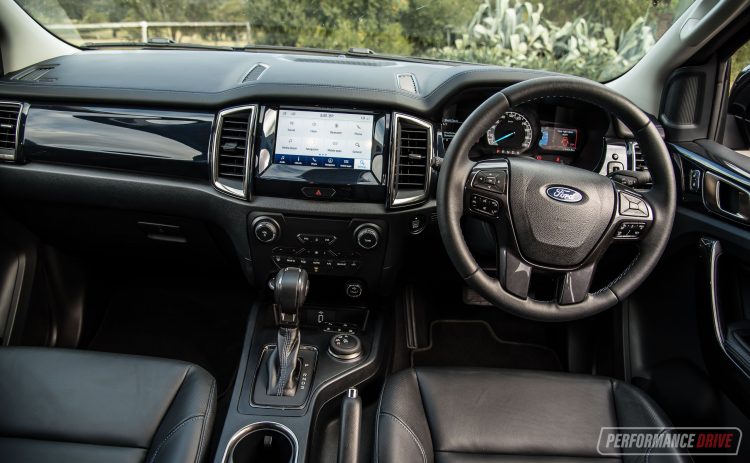 The 8.0-inch centre touch-screen is a little small compared to more modern SUVs, but it is clear and easy to use. The instrument cluster is pretty modern too, but it seems many display options are squashed into small digital displays on the right and left sides. This results in a tiny digital tachometer no bigger than a wrist watch. The font is also primitive and makes it difficult to read on the go in our opinion.

It’s not all bad news, though. Space and practicality-wise, it does not disappoint. There are many storage spaces to throw your belongings into, and for all three rows. A wireless phone charger sits in the top section of the centre console box, but phones with screens larger than 6.0 inches will not fit in the spring-loaded housing.

The Everest is a big SUV inside. Whether you’re in the front or second row, you’ll feel at home with lots of wriggle room. Passengers tower above the road, with a high driving position, too. The leather seats are also supportive with electric adjustment on the driver’s side only. Larger families are well-accommodated, with room for the young ones in the third row, complete with separate cup holders. And the third-row seats are barely noticeable when flipped down. 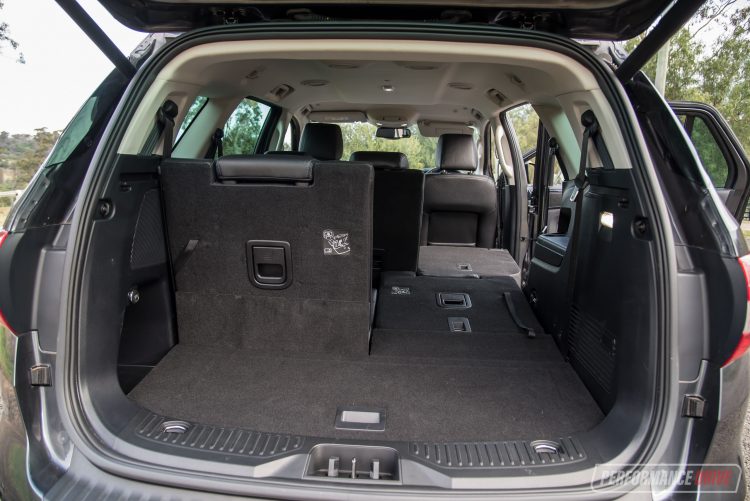 Still in the boot, and one of the strongest traits of the Everest is the volume. Officially, it measures 1796 litres with the second and third row folded down, and 876 litres with five seats in use. If all seats are in use, the space available is still a commendable 249 litres. For comparison, the Mazda CX-9 leaves you with 230 litres with all rows in use, and the Toyota Fortuner offers 200 litres. 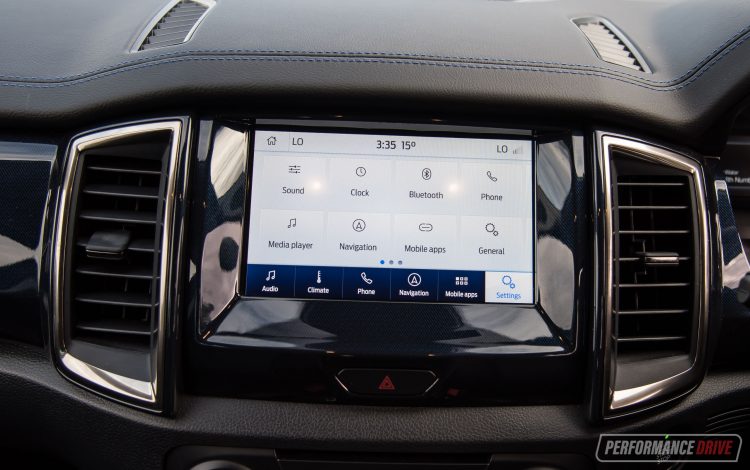 All models are also now fitted with Ford’s SYNC 3 operating system, and feature FordPass Connect which allows you to remotely control some of the vehicle’s functions – such as lock/unlock, remote start –thanks to a SIM card connection and the Ford mobile app.

The Everest requires servicing every 15,000km or 12 months, and it is offered with logbook services capped at $299 for the first four years or 60,000km. It’s also covered by a generous five-year, unlimited kilometre warranty. 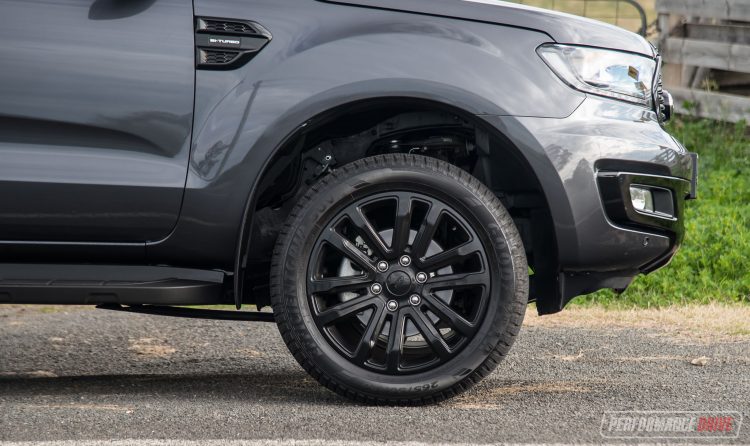 At first, we were a little apprehensive to hear a small 2.0-litre four-cylinder would be powering this large SUV. But with the new bi-turbo setup, don’t be fooled. On the road it punches away with a torque explosion. The full 500Nm kicks in from a low 1750rpm. This means that everything good happens relatively quickly. And with that, it pulls up any long and steep hill like an ox. Peak power is 157kW, achieved at 3750rpm. It is one of the most powerful diesel four-cylinder units in this class. We timed 0-100km/h in a decent 9.79 seconds.

What also helps the Everest get going quickly is the 10-speed auto gearbox. It is reasonably well organised and intuitive when it comes to lining up the best gear quickly, and it shifts smoothly. It also helps to bring the engine speed down when cruising at freeway speeds, which increases fuel economy and reduces noise levels. However, it can hunt around a bit in slower traffic situations and when making regular street turns. 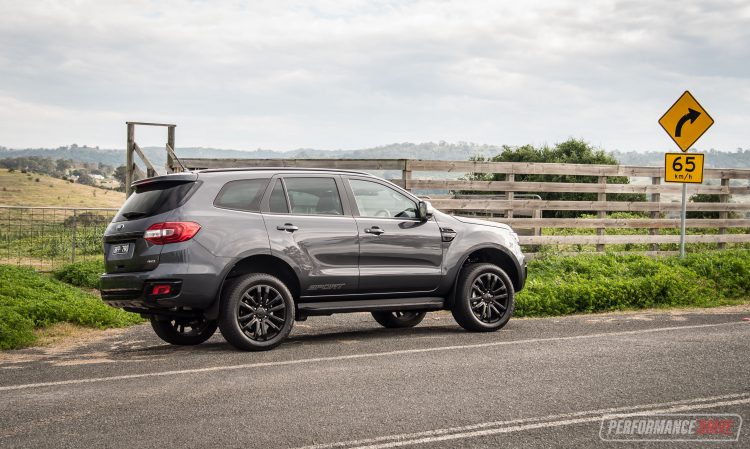 In terms of NVH (noise, vibration and harshness) levels, the Everest now comes with active noise cancellation. This doesn’t mean you get a pair of headphones to block out noise. Ford has cleverly placed three microphones in the cabin to detect noise levels, and it outputs particular sounds through the sound system to cancel out unpleasant noises. It’s quite clever.

If you need to or wish to tow, the Everest should be on your list for consideration. It offers one of the highest towing capacities in this segment, with 3100kg (braked). This means it is rated higher than the Isuzu MU-X (3000kg) and Toyota Fortuner (2800kg), but equal to the Mitsubishi Pajero Sport. It also comes with safety technologies related to towing, including trailer sway assist and rollover stability control. 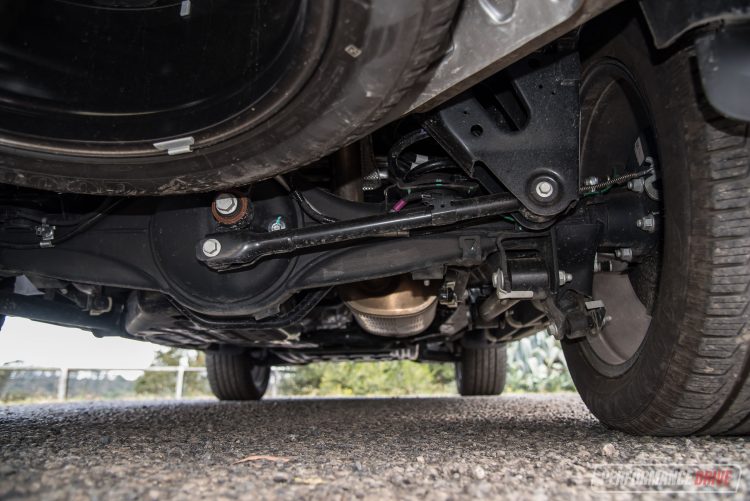 The all-important fuel usage figures officially rate the 2.0-litre Everest 4WD at a low 7.0L/100km on the combined cycle. Our average hovered around 8.6L/100km, which is the same as the average we measured in the Isuzu MU-X – and it has less power and torque. If you go by the official reading, that is a new benchmark in this market, considering its size and weight (2387kg). But you might find it rises a little in the real world. The fuel tank holds 80 litres, so you should be able to travel at least 800km before refuelling.

Which brings us to the Everest’s performance off road. Up front is an independent suspension setup, with a solid rear axle but with coil springs over the Ranger’s leaf arrangement. Behind the wheel, it loves being off the bitumen. It absorbs bumps well and the coil springs at the back minimise in-cabin vibrations and shudders when driving over corrugations. 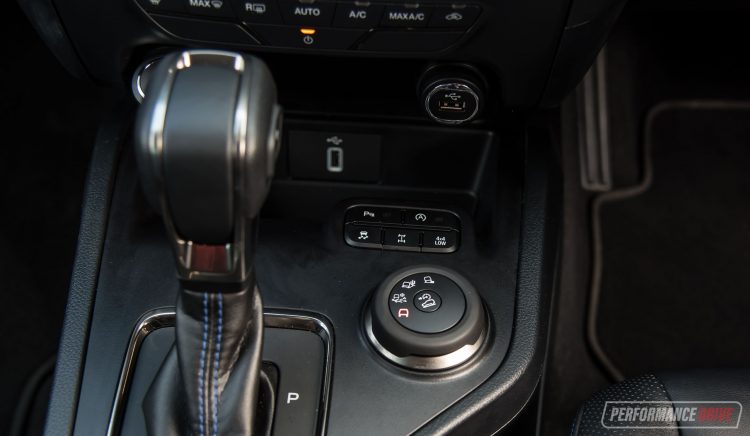 There is a generous ground clearance of 227mm, falling slightly short of the Isuzu MU-X’s 230mm, while overshadowing the Pajero Sport’s 218mm. Ford claims a water wading depth of 800mm, and the approach and departure angles are praiseworthy, at 29.5 and 25 degrees, respectively. Ford also provides a number of special driving modes so you can toggle through and find an appropriate setting for the given terrain.

If you choose a 4×4 variant, there is a suite of off-road tech, including hill descent control, which assists in maintaining a constant low speed on gnarly descents, a dual-range transfer case that is commanded by a dial, and an electronic locking rear differential. With all of this, the Everest Sport is a very capable off-roader. The highway-terrain tyres are probably the weakest link. 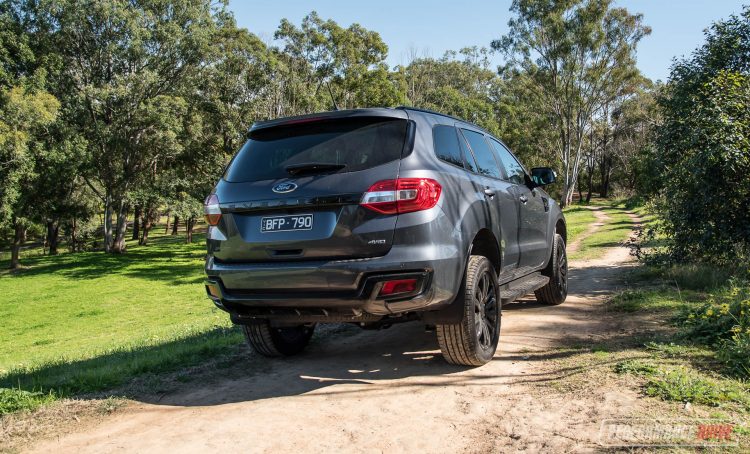 We know a market still exists where, not only do drivers want a car that is higher off the ground, but can actually perform well when it comes to off-road conditions. If you’re one of them, you should consider the Ford Everest. Especially the new Sport variant. It brings an ageing model to life thanks to youthful enhancements, while adding some important safety and convenience tech that is omitted in the lesser variants.