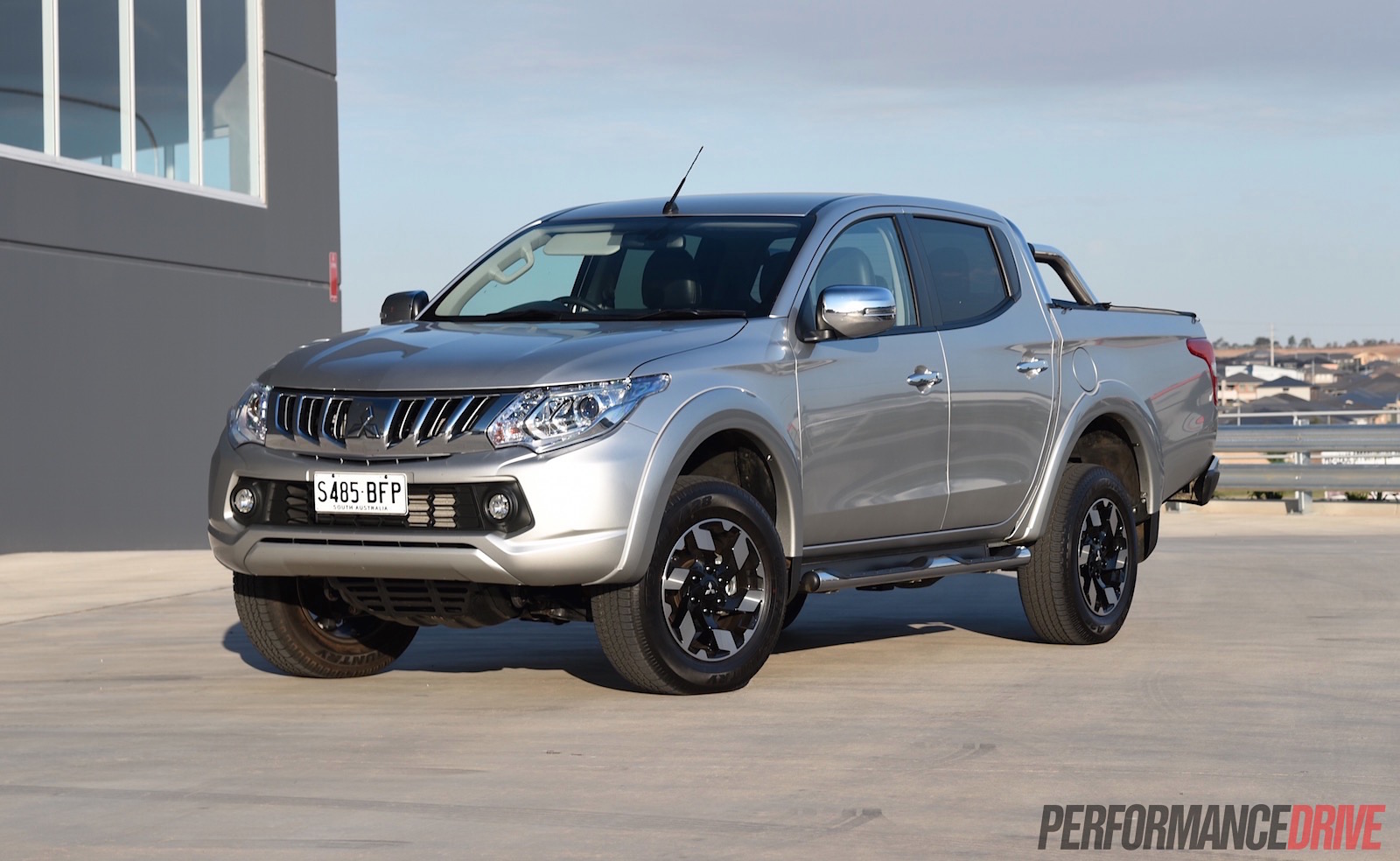 Mitsubishi’s Triton has long been a stalwart of the ute segment. For decades, it has won many friends as a reliable, trusty workhorse, in a segment where Mitsubishi shines using its vast experience in heavy-duty machinery. 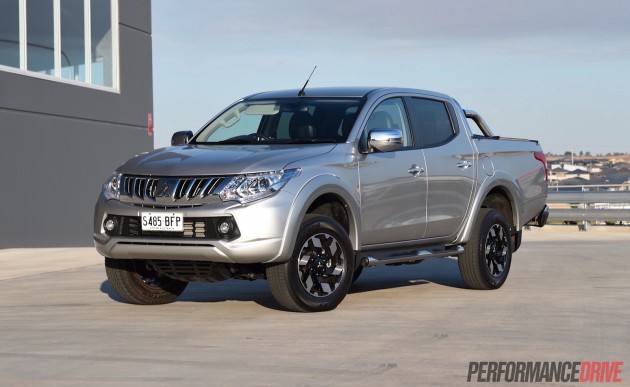 And it needs to be brighter than ever for the 2016 model. Triton, as well as its traditional rivals, including the HiLux, Ranger, Navara, Colorado and Mazda BT-50, are under siege from every angle. In the last few years, we’ve seen Volkswagen throw its hat into the ring with the sophisticated Amarok and even Mercedes-Benz announcing it wants a piece of the pie.

On the more price-sensitive side of the market, we’ve also seen an assault from Chinese entrants in the form of Great Wall and Foton. It’s no surprise then that almost every single model in the segment is receiving either a facelift or a redesign for 2015-2016.

We’re testing the two top Triton 4×4 variants to see how they shape up. Namely, the GLS (blue) and flagship Exceed (silver). Both come with a new 2.4-litre turbo-diesel four-cylinder engine developing 133kW and 430Nm. A new six-speed manual comes as standard for the GLS, with the Exceed getting the also-new five-speed auto as standard (optional on all other variants). 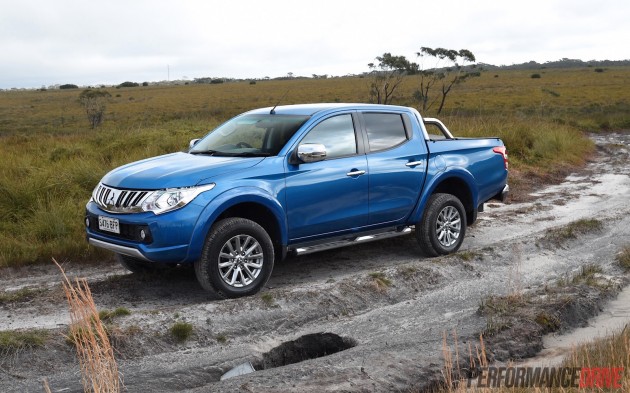 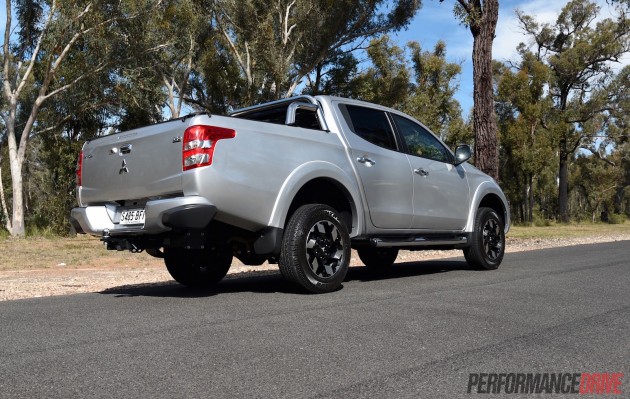 At $40,990 (excluding on-roads), the Triton GLS sits comfortably below the Ranger XLT and HiLux SR5 mid-spec equivalents. For that price, you get a rear-view camera, fog lights, bi-xenon headlights, side steps, dual-zone climate control, power-folding mirrors, LED daytime running lights, and the full safety arsenal of ESP and airbags. ANCAP has given all variants five stars and a score of 36.22 out of 37. The top model Exceed price starts at $47,490, and again it is below the direct rivals by a considerable margin.

The Triton sits in the middle of the road for towing capacity (3.1 tonnes versus 3.5 in some rivals) and dimensions, but to take those factors at face value is to ignore why Triton remains so popular. It’s worth noting at this stage, however, that the payload is 950kg and tray width is 1050mm – 115mm short of a standard pallet.

Above the GLS is the flagship Exceed. It adds things like leather seats (power adjustable for the driver), sat-nav, auto headlights and wipers, push-button start, and unique 17-inch wheels (GLS also gets 17s, identical tyres). Mitsubishi has reserved a rear differential lock for the Exceed only this time around, while the GLS gets a centre diff lock like the rest of the 4×4 lineup.

The newly redesigned 2016 model evolves the styling theme of its predecessor in all trim levels, and adds a few detail flourishes such as a pinched beltline and front-end treatment, with a more squared-off rear end. A big chrome grille has also been added for a distinctive look. 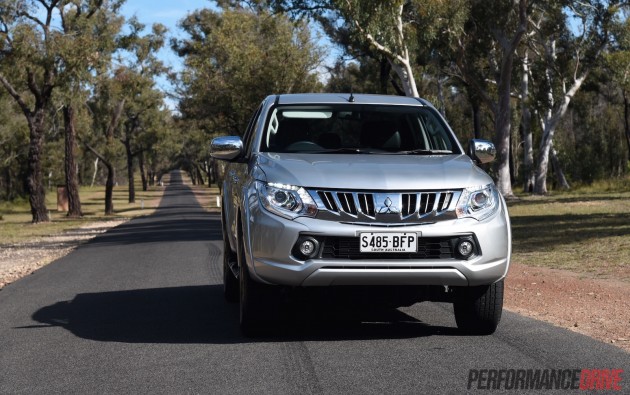 Step inside and you are greeted by a nicely laid-out interior that seems well put together. Although the majority of the plastics are of the hard, scratchy variety, the piano black fascia flanked by aluminium-finished spears does a fine job of lifting the ambience. Aside from the leather seats, Exceed customers only benefit from leather inserts in the door trims. Aside from these, both cabins are basically identical except for the touch-screen interface.

The Mitsubishi Link system accessed by the GLS’s 6.1-inch touch-screen is a drawcard of the newcomer. It has digital radio (DAB), Bluetooth and USB functionality, and presents a cleaner in-screen button layout. In the Exceed is a more comprehensive yet more fidgety 7.0-inch touch-screen system that presents external button menus. As mentioned, it does add sat-nav though.

While rather intuitive in its basic functions in both, some of the menu items such as the sound equaliser and pairing a phone via Bluetooth are a little more distracting and fiddly than they need to be. The sound quality of the six-speaker stereo in both is excellent, obviously optimised to withstand lots of bass, although, the DAB reception is patchy.

The dials are legible and nicely spaced, which is just as well because there is no digital speedometer. Unfortunately, the steering column, while now offering both tilt and telescopic adjustment, is still limiting. It can be difficult to find the perfect driving position.

Dimensionally, the MY16 version is similar to its predecessor. This means rear seat room isn’t quite up to class best. Mitsubishi has made some revisions to open up more space in the rear though, including adding cutaways in the backs of the front seats. Passengers aren’t really going to be complaining as such, as it does offer plenty of room for three and good cushioning for long journeys. The company claims best-in-class front seat legroom, with slide travel increased 24mm. 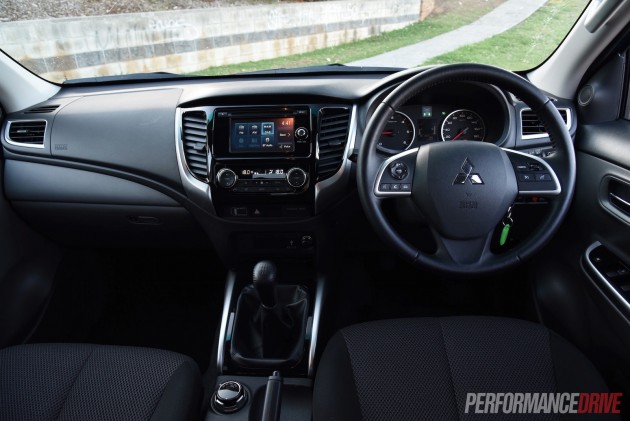 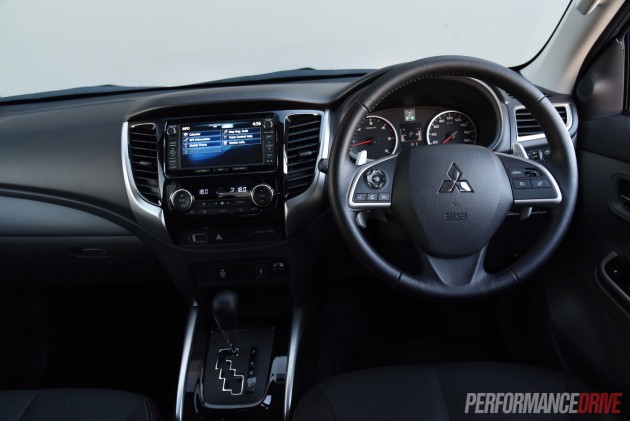 The new-for-2016 2.4-litre diesel engine is more refined and noticeably quieter than the 2.5-litre unit it replaces. It generates 133kW of power at 3500rpm, while torque is a healthy 430Nm available at 2500rpm in both auto and manual guise. Until peak torque comes in, there is a real paucity of thrust, so you need to dial up the revs to achieve a decent getaway.

Once this disappointing lag is overcome there is a delicious wave of torque to surf, and mountains are yours to conquer. On the freeway, the refined nature of the diesel engine becomes apparent. It cruises comfortably at freeway speeds, requiring low revs to maintain the national speed limit. Given a gentle push, overtaking is no problem. The only real disruption comes from wind noise as it crashes against the A-pillars.

The addition of a sixth gear means economy around the 8.2L/100km mark when cruising on the freeway is possible, fluctuating into the 9s around town, and double figures when pushed hard. In the five-speed automatic Exceed, we found it easier to drive economically, returning very similar real-world figures. It seems like the automatic understands the turbo-lag to some degree an makes allowances for it, while in the manual you tend to dial in more revs to get things moving, tarnishing economy. Officially, the manual offers 7.2L/100km and the auto uses 7.6L/100km on the combined cycle.

Mitsubishi has, thankfully, updated the steering system for the 2016 model. Gearing is decreased from 23.7:1 to 20.1:1, resulting in less turns lock to lock (from 4.3 to 3.8). It’s no sports car, but this was a much-needed fix in our opinion as the previous model was downright tiring to thread around inner-city streets and around roundabouts. It feels tighter and slack-free off-centre, with a nice, consistent weight and feel. It is fairly direct and gives enough feedback to help you keep the 1950kg beast in the right place with reasonable confidence. In terms of handling and body control, the Triton remains as an average performer overall. Mitsubishi has managed to serve up the best turning circle in the class with the new steering setup, allowing drivers to ‘chuck a youie’ in 11.8 metres.

Like in most dual-cab 4×4 utes, parking isn’t exactly easy. The steering still requires lots of arm work, and the sloping/unpredictable front end makes it difficult to manoeuver nose-first through tight spots. A camera at the back means there is no such difficulty when going tail-first, so long as you are mindful of the sheer length of these big trucks – obviously many customers forget that sometimes, evident by the almost mandatory elongated off-centre dent found on most job site tailgates.

Off the road, the Triton’s transfer case and 4×4 settings can be accessed by a rotary dial. Mitsubishi has a tried and true reputation when it comes to off-roading. And in the Triton, it shows it has no trouble handling most situations with aplomb. Both offer a 205mm ground clearance, a 30-degree approach and 24-degree departure angle, and both feature low-range with a centre diff lock. In the Exceed the rear diff lock makes it pretty much unstoppable in really rough and/or slippery conditions. We have no problem saying the Triton remains as one of the most rugged and best-performing off-road utes on the market. 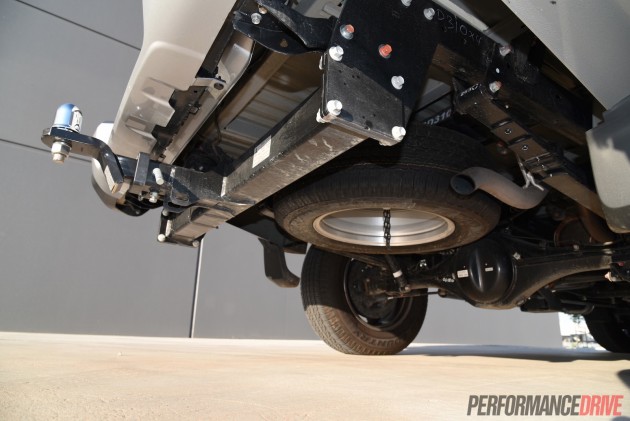 The 2016 Triton might not be to everyone’s taste in the styling department, but once you’re behind the wheel, it’s hard not to be impressed by its willingness to work and play. The GLS is attractively priced and well-equipped and is probably going to fulfil the needs of most buyers, while the Exceed aims for a more sporty buyer with its great-looking dark alloys and premium interior – it, too, is reasonably priced for a top-spec variant.

The reality is while likable, the Triton doesn’t excel over-and-above its rivals in any key areas. It aims to hit a more value-oriented sweet spot while not trading on quality and refinement, thanks to the updates. And for many, it serves that purpose to a tee.

CONS:
– Torque flat-spot off the line; turbo-lag
– Can be difficult to park
– Still average handling/steering for the class

Brett Davis contributed to this report