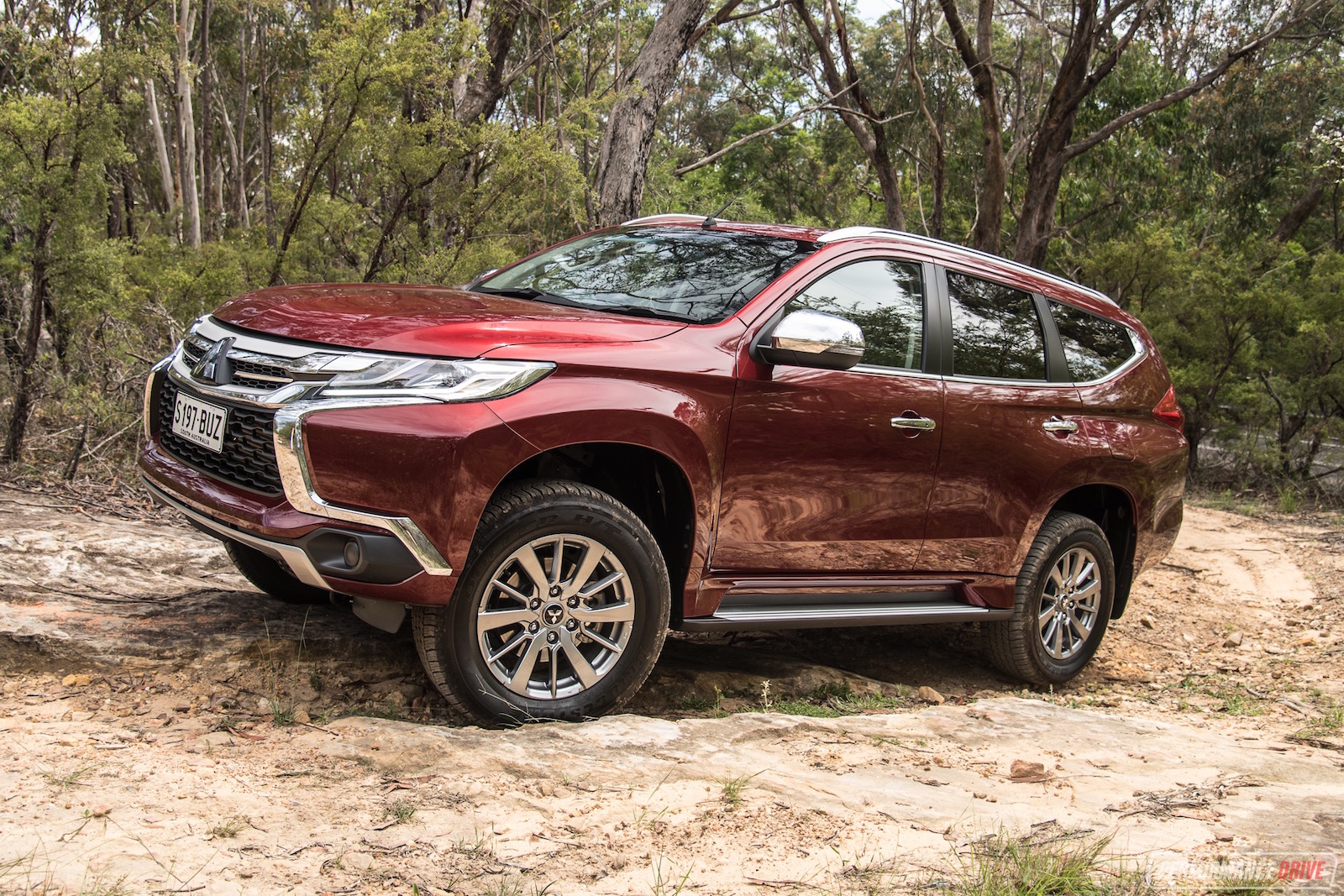 Mitsubishi continues to focus on the ever-increasing SUV market with an update to the Pajero Sport. With no less than five SUV models on offer, it’s obvious that Mitsubishi has diverted its attention away from almost all other vehicle types. With so many models to choose from, it can be confusing to know where the Pajero Sport fits in. 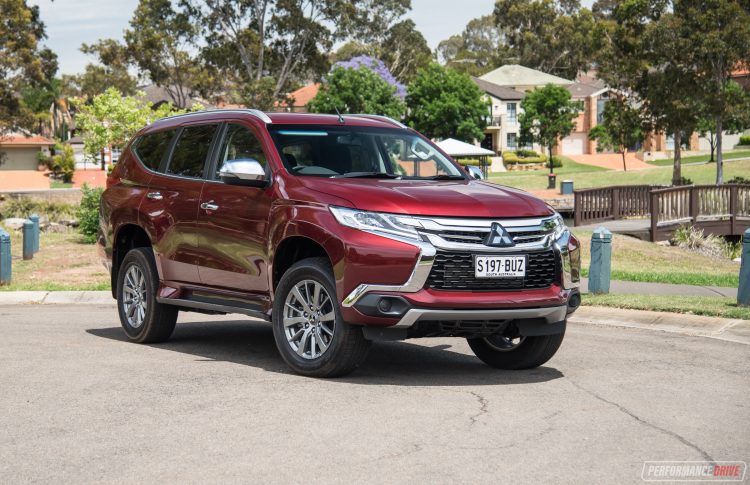 To give you an idea, the Pajero Sport is based on the same platform as the Triton ute. Which indicates that it is designed more for drivers that are truly intending to head out for off-road adventures. It contains all the underpinnings purpose-built for hard-yakka. It’s bigger and more rugged than the ASX and Outlander, but slightly smaller than the old Pajero.

The lineup is straightforward. It runs through with the GLX, GLS and the Exceed. The entry-level GLX, as tested, is only available with five seats, while the GLS is available with five and seven seats, and the top Exceed is seven-seat only. All variants come standard with part-time RWD/4WD and an eight-speed auto – sadly, no manual transmission is offered for hard-core off-roaders.

The latest Pajero Sport rendition comes better equipped across the range, and with only a slight increase in price. The GLX will set you back at $46,000 plus on-road costs, which is a $1000 increase from the previous version. And the range climbs up to $54,200 for the Exceed, which sees a jump of $1200 over the previous model. 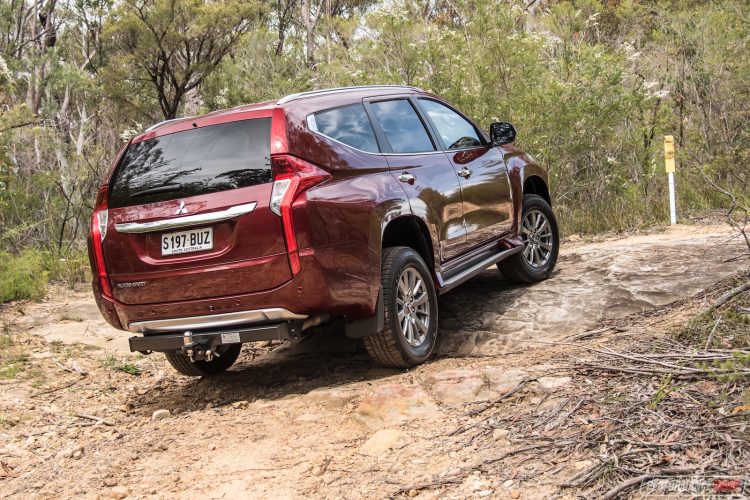 Mitsubishi has been surprisingly generous with the base GLX Pajero Sport. Especially for a vehicle that’s perfectly at home when you veer off the bitumen and into off-road tracks. It’s great to see this category not missing out on crucial safety features. For example, as standard, all 2018 Pajero Sports are fitted with forward collision mitigation, rear camera and parking sensors, and distance-controlled cruise control. You also score climate control air-conditioning, proximity key central locking and keyless start, daytime running lamps, selectable driving modes, gear shift paddles, electric park brake, power-folding door mirrors, and digital radio. 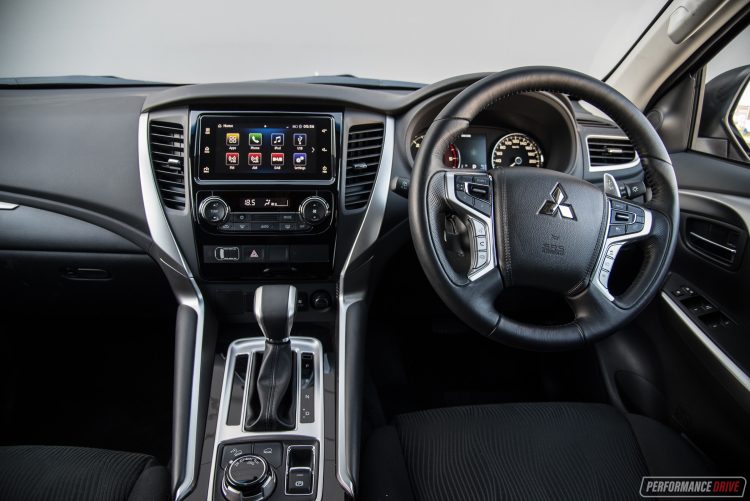 If you demand other bells and whistles like blind-spot sensors, front and side cameras, or heated leather seats, the Exceed will get you these. And the price jump isn’t as steep as some other manufacturers – the Exceed starts from $54,200, as mentioned above.

For a base model, the GLX’s cloth interior is still graceful and comfortable. Materials feel hard-wearing, and the design is modern and pleasant. We put our interior through some rough outback treatment during this test, heading out into the bush for a weekend camping, and it withstood the mess and dust very well. 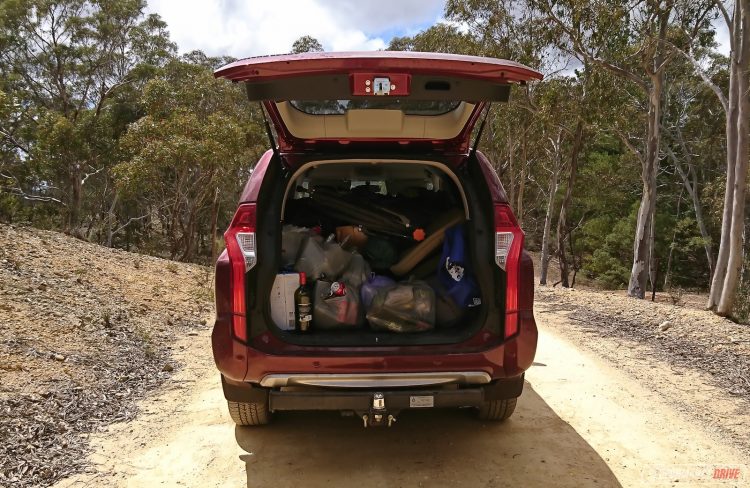 Sitting on the soft seats for extended periods, the GLX proves to offer great grand touring ability. Visibility is good thanks to the tall and narrow cabin orientation, and the low window sills, and legroom and headroom is decent in the front. Rear seat space is more than respectable in terms of legroom, but overall width does hinder shoulder space a smidge compared with some rivals.

When not needed, the back seats collapse in a two-stage process, where the flat part of the seat swings up behind the front seats, and the backrest section tilts down to a completely flat position. The amount of usable space you’re left to play with is impressive. Officially, the boot measures in at 673 litres with the rear seats in use, and 1624 litres when the second row is folded away. Those numbers are beaten by the Toyota Fortuner’s 1080L, and the Isuzu MU-X’s 878-litres (both with two rows in use). But the space in the Pajero Sport is much more open – especially as the load height is quite low, and there is no third-row seating getting in the way of this GLX. We also suspect different measuring techniques are used. 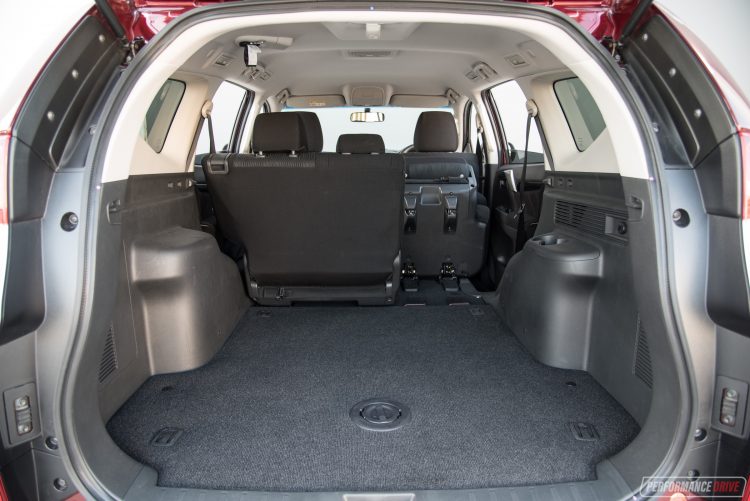 The GXL gets a basic four-speaker stereo with a touch-screen and all the connectivity options; Bluetooth, USB, aux-in, and Apple CarPlay and Android Auto, which is expected when you level it against the competition. The screen itself does all you need it to do with ease. Being the type of vehicle it is, and likely to be used for camping trips and the like, there are plenty of 12-volt and USB power outlets throughout the front and rear. 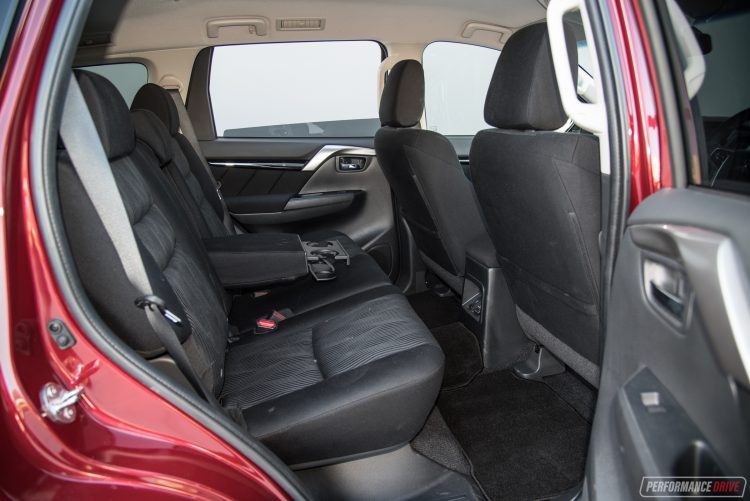 As you would expect, the Pajero Sport sits high on the road. With long travel suspension, you’ll find yourself climbing up into cabin and looking down at the cars around you. Even though the underpinnings are the same as in the Mitsubishi Triton, the suspension differs. It uses double wishbones, coil springs and a stabiliser bar up the front, and a three-link coil-spring rear end with a stabiliser bar to provide less bounciness compared with the Triton’s commercial leaf springs. But, you still feel like you could just about run over anything and it won’t be deterred.

Handling is quite composed for such a tall mass. It leans into corners and doesn’t give into substantial body roll until you really push it. There is plenty of side-to-side weight-shift at lower speeds due to that long travel suspension, which is great for climbing over rough stuff. Off-road performance is excellent, with part-time four-wheel drive engaged at the twist of a knob on the centre console. As we found out during a previous serious off-road test, the Pajero Sport is one of the most capable vehicles in the class. 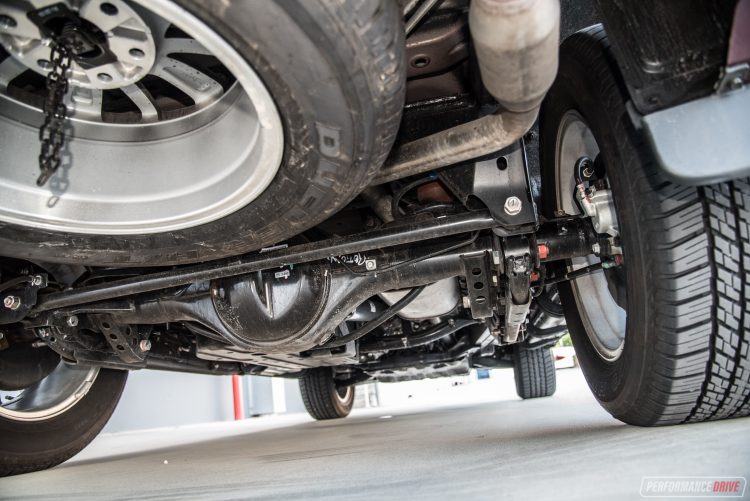 We find the steering to be adequately weighty, and easy to navigate through tight environments, even though more steering wheel rotations are required than your average car. And at highway speeds, it’s more stable than some other serious off-roaders on the market, which translates to less effort to keep centred in the lane.

For the serious off-road business, the Pajero Sport has all the right traits; a 218mm ground clearance (2mm higher than the Toyota Fortuner) and an approach and departure angle similar to that of a LandCruiser; 30 and 24.2 degrees, respectively. It also has low range gearing, centre diff lock (rear locker for the upper variants), and hill-descent control. The latter of which makes it possible to drive down hairy slopes without the tyres locking up. Improvements could be made with more protection plating underneath, we feel, particularly toward the front of the vehicle. 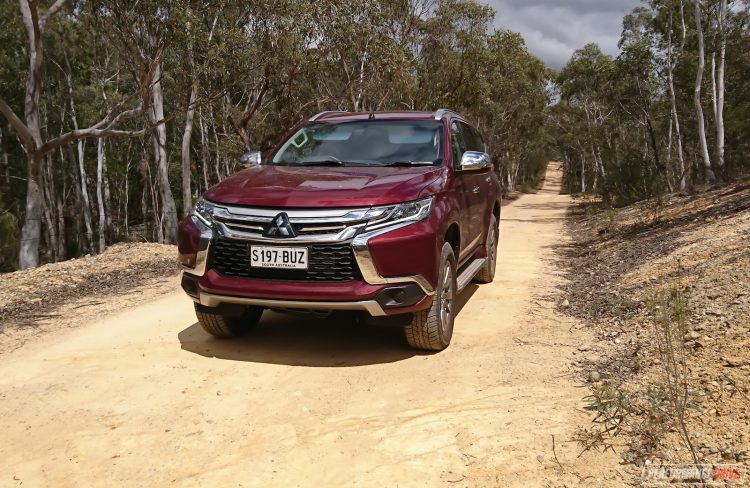 All Pajero Sports are fitted with the same 2.4-litre direction injection turbo-diesel four-cylinder engine, which produces 430Nm of torque and 133kW of power. In practice, the engine gets the job done effortlessly low in the rev range. You find yourself getting up to speed swiftly and without much effort. But it doesn’t perform any better when you put your foot to the floor. It almost feels like there’s no difference from driving normally to driving aggressively. It’s no problem though; the Pajero Sport is not designed to be a vehicle capable of breaking quarter mile records. Still, we clocked 0-100km/h in a respectable 10.81 seconds (in 4WD mode), which betters some rivals.

Official figures for fuel consumption for the Thai-built SUV rate well, at 8.0L/100km on the combined cycle. Our testing measured close to that, with 8.7L/100km displayed on the trip computer after a week of driving (reset at the beginning of the test). That measures better than our tested figures of the Fortuner’s 10.2L/100km, and on par with the Isuzu MU-X’s 8.7L/100km. If you’re aiming to do some towing, the 3100kg braked capacity is 300kg more than the Fortuner’s rating and 100kg superior to the MU-X.

If you can look past the ugly rear end design, the 2018 Mitsubishi Pajero Sport is a strong contender. It’s an SUV that can go proper off-roading. We give huge credit to Mitsubishi for offering forward collision mitigation as standard on all models, and packing the GLX with a good mix of features to keep all family members happy. Even though the GLX is slightly more expensive than the base model Toyota Fortuner, it comes with more crucial safety features. And if you want some extras, the GLS and the Exceed aren’t a big jump up in price.

CONS:
– Unforgivable rear end design
– No option for manual transmission
– Based on heavy-duty ute, not to be taken as a ‘crossover’