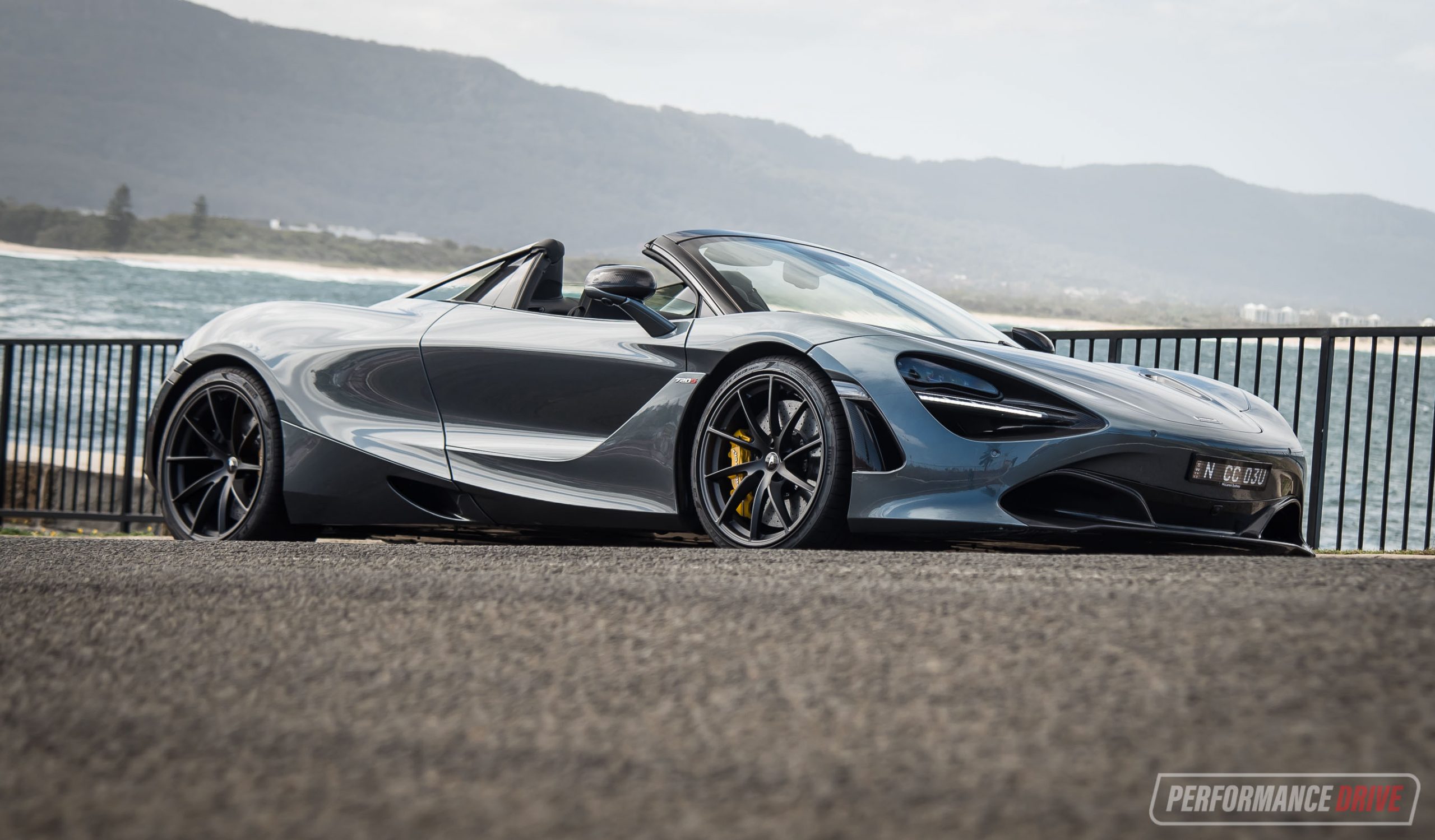 In the unruly world of supercars, sheer speed and looking like sheer speed are of utmost importance. The 2020 McLaren 720S Spider certainly seems to have those covered off. But is there more to it? 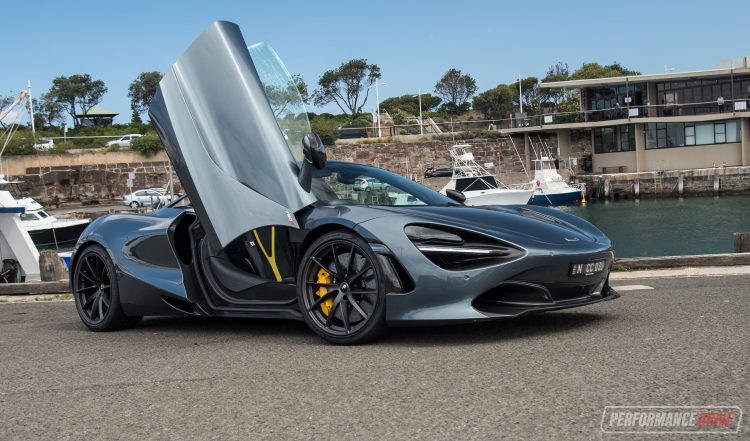 It’s also one of the most powerful production cars on the Australian new car market, with a whopping 530kW and 770Nm on tap from its 4.0-litre twin-turbo V8. A dual-clutch auto transmission with rear-wheel drive is the only configuration. Actually, that’s not entirely true. You can get it in coupe and drop-top Spider forms. 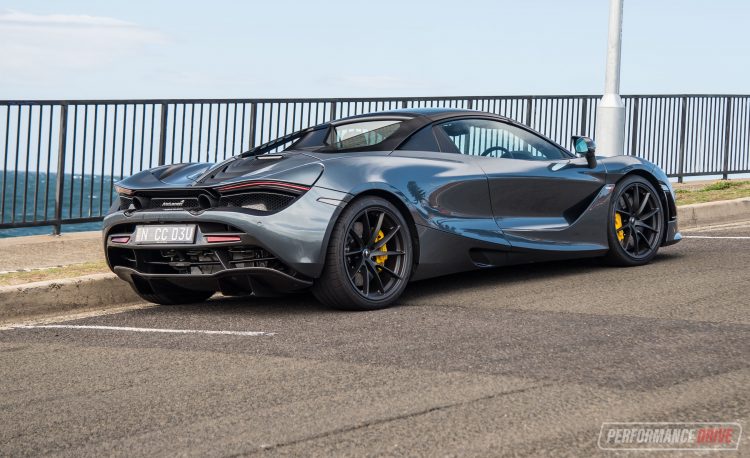 Well, to start with, let’s just take a step back and gawk at it. It is stunning to behold in the metal, overtaking anything else that might be in your view. And obviously it attracts plenty of attention from anybody within a 500-metre radius. This, we feel, could become annoying after a while. But how can you blame them?

Perhaps the most fascinating element of the entire vehicle is the attention to detail in aerodynamics. The body is carved and slashed in so many areas, with huge intakes and outlets hiding within the otherwise smooth design. You don’t really notice these cuts and vents as much in images, but in person, the detail is amazing. The massive channels within the doors are just spectacular. 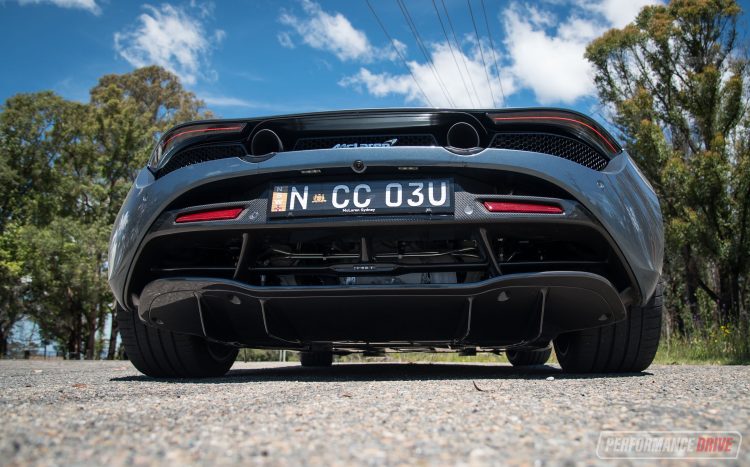 The great thing about ‘butterfly’ doors (twin-hinged dihedral; they move up and out, as opposed to scissor doors which move straight up) is the sheer wow factor they possess. There’s never a moment going unnoticed when entering or exiting the car. A bad thing, though, is that every time you swing the door up, you can hear all of the dirt and grit pouring from one end to the other within the door skeleton. Like sands through the hourglass…

Like the coupe, the 720S Spider is based on McLaren’s carbon fibre MonoCage II platform. Due to the sound rigidity and integrated roll structure of the platform, the Spider doesn’t really incorporate any additional structural reinforcements, as they weren’t deemed necessary; it’s already strong enough. However, the mechanism for the flip-back roof and the hard-top folding piece itself add around 60kg over the coupe’s tare mass. This weighs 1491kg, which isn’t much at all by today’s standards. 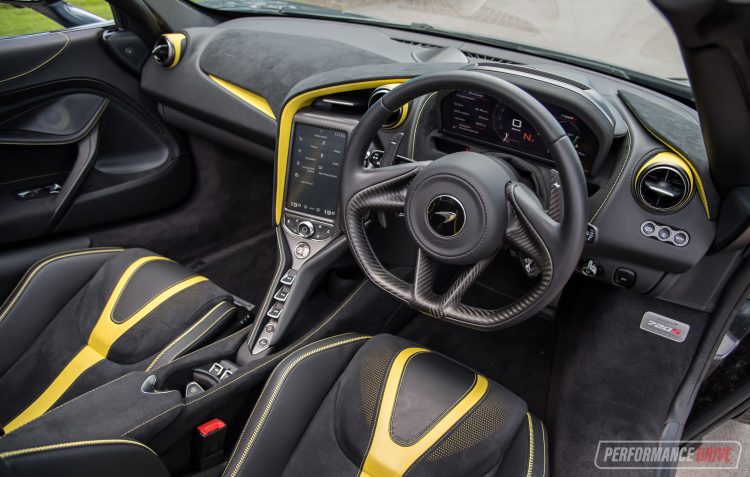 Inside, it is surprisingly accommodating and comfortable. Sure, you do need to perform complex yoga moves to get in and out, just because it is so low to the ground. But once you’re in, the sports seats provide decent cushioning and support, and the visibility is superb. McLaren designs its windscreens like a low-set dome, so not only do you look out and over the bonnet, there’s also good peripheral clarity. You get a decent view through the rear-view mirror, too, and in the Spider you can slide the little vertical window down to take in the full V8 serenade.

Most of the on-board functions are controlled and viewed through the 8.0-inch upright touch-screen. We’re not excited by the graphics it portrays or the sharpness of the pixels. It also seems like there is a clouded surface over the top. However, it is user-friendly, with a typical grid-like layout of in-built apps to play with. One such app definitely caught out attention; ‘Variable Drift Control’. Say no more. 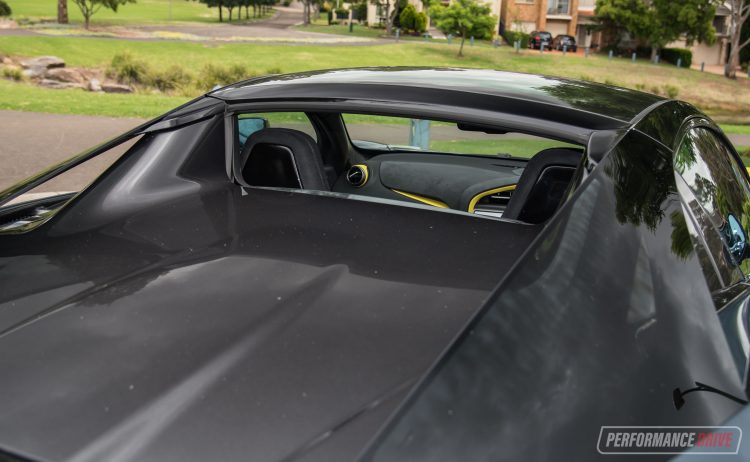 The climate control vents, or lack thereof, need to be cranked up to do their job, and you won’t find much storage in here. Aside from under the bonnet, where 150L is presented along with a 12V socket. The Spider has another storage area above the engine. Opening this is a bit of a spectacle, as it deploys the electronic mechanisms that peel back the roof.

Speaking of the roof, it is a folding hard-top design, opening and closing at the touch of a button in around 11 seconds. With the roof down the car is pretty much a coupe, offering a quiet and covert drive. This test vehicle also shows off the glass roof option, and a very cool blue tint transition. You just touch a button and the glass transforms to a dark blue tint. It’s like something straight out of a James Bond flick. 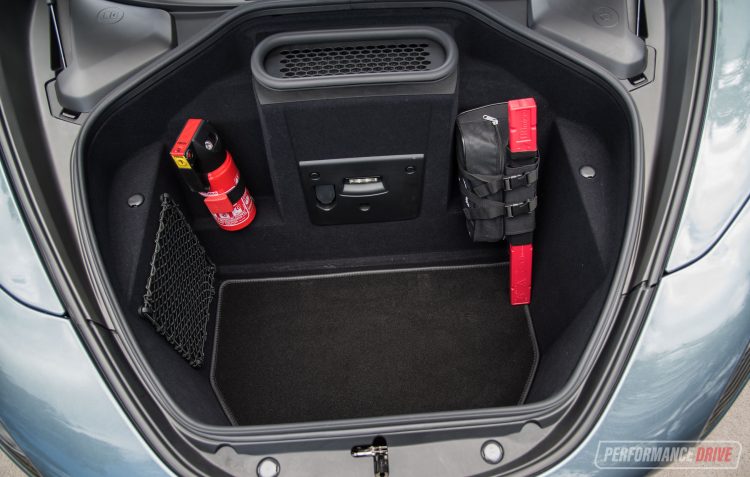 Yes, you can drive this in a totally normal manner; pop down to the shops and pick up the milk and bread. In fact, your mother could do it – although she might blossom a hernia getting in. It’s all quite conventional and well behaved. The dual-clutch transmission is smooth and fuss-free, except the usual delays going from drive to reverse and so on, and the suspension, while firm, isn’t as bone-jarring as you might expect.

You can drive it in this manner. But why would you want to? Did we mention the 530kW and stiff carbon fibre chassis? Around corners the 720S is just unbelievably good at making a tight corner feel like a big sweeping bend. You can carry big speed in and maintain complete and utter control and confidence through the corner, and then enjoy that missile of thrust on exit. 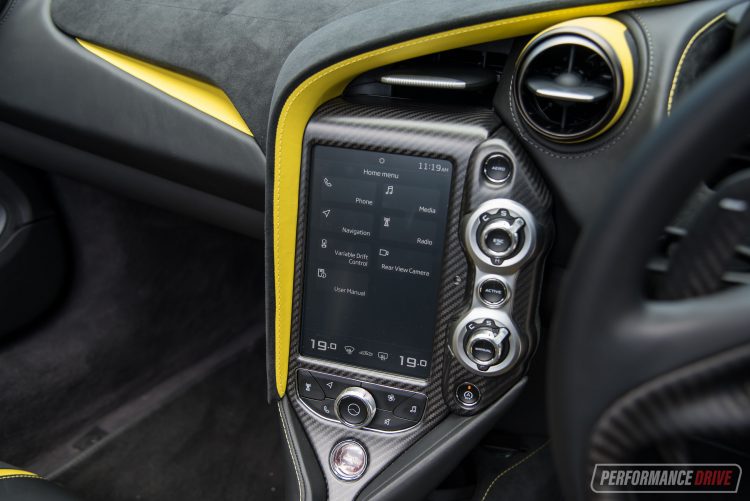 There is some play and slip if you want it, and of course there’s more than enough torque to initiate big, smoke-engulfing powerslides – tap into that variable drift control app to adjust how far you’d like the back end to step out. For me personally, this handles like a go-kart. Literally. It just goes where you tell it, precisely when you tell it, and it provides full communication on what’s technically occurring in real time. You can chuck it around like a go-kart or go for a committed and sensible line, and it’s as enthusiastic as you either way. Unlike a go-kart, there is ride quality, so you’re not bounced out of your seat on every surface imperfection.

By far the most captivating element to this car is the engine and the seemingly unlimited longitudinal force it can produce. There is a hint of turbo-lag if you expect too much from too low in the revs. When it’s on boost though, which is most of the time, it’s a roaring psycho. It just goes nuts, revving to 8000rpm and building speed like a super sports bike. And there’s a turbo whistle and sneeze on the overrun. 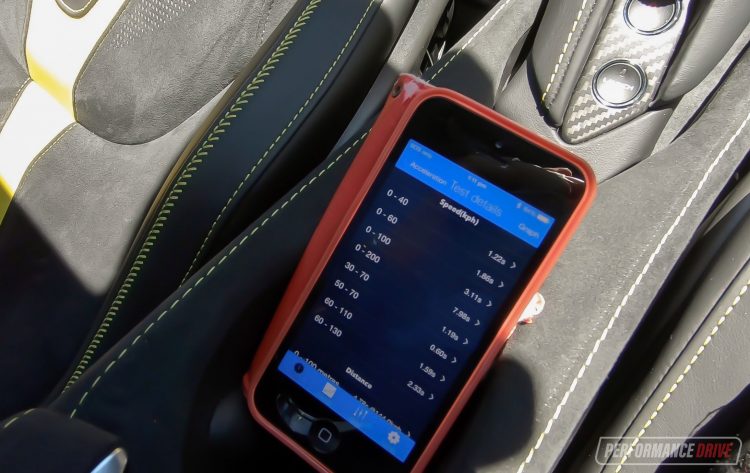 On one hand it is remarkable how consistent the figures are, but then again, the Spider is only 60kg heavier. Things like wind speed and direction, and even fuel level could influence the alignment in performance that we experienced. 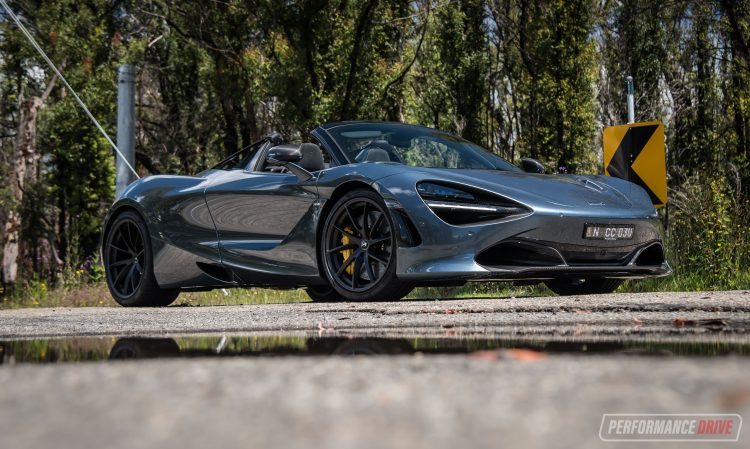 Under the latest WLTP test cycle the 720S Spider offers an average fuel consumption of 12.2L/100km, which is the same as the coupe – and actually the same as what we recorded during our test of the coupe. However, under the older test protocol the coupe was officially rated at 10.7L/100km. During our weekend in this Spider we recorded an average of 18L/100km.

As no surprise, the CO2 emissions rating is the same between the coupe and drop-top, emitting 276g/km on the official combined cycle. That’s lower than the rivalling 470kW Lamborghini Huracan EVO AWD Spyder (335g/km), and a lot lower than the equally-powerful 530kW Ferrari F8 Tributo (376g/km). All of these figures are actually quite impressive considering the extreme level of performance that’s also available. 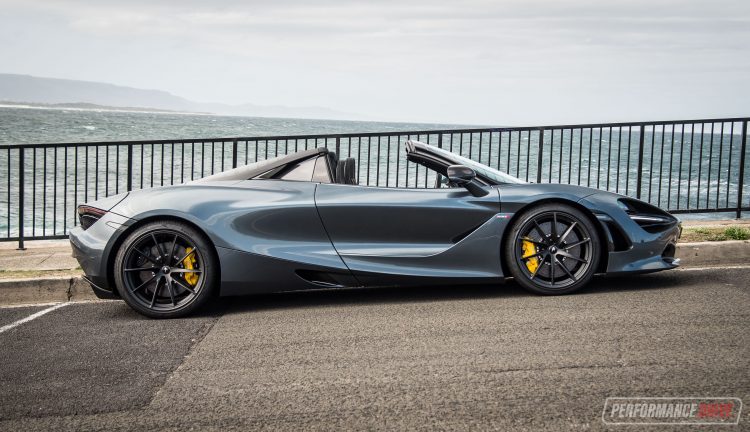 Obviously price isn’t anywhere in the list of priorities for supercar shoppers, or at least very low in the list. However, we can’t help but notice Ferrari offers its F8 Spider for around $20k less, and Lamborghini’s top Huracan EVO Spyder is about $50k less. And the Ferrari, in particular, offers exactly the same power and torque and a very similar top speed (340km/h).

Again though, we doubt any of you considering buying something like this gives a hoot about pricing. We’re simply trying to do our job and providing the facts. And, as you can probably tell, we’re trying to put a professional spin on what has been an absolute life-changing road test experience.

The 720S Spider is one of only few cars on the new car market that offers the ultimate expression of motoring extravagance, road-legal performance, and awe-inspiring design. It is also the fastest car we’ve ever tested across 0-100km/h, 0-200km/h, and the 1/4 mile.

PROS:
– Epic straight-line speed and top end power
– Handles like a wasp
– No sacrifice in performance over the coupe
– Mesmerising aero details carved into the body design
– Easy to drive, good visibility (for a supercar)
– Hard-top roof provides coupe-like refinement and quietness