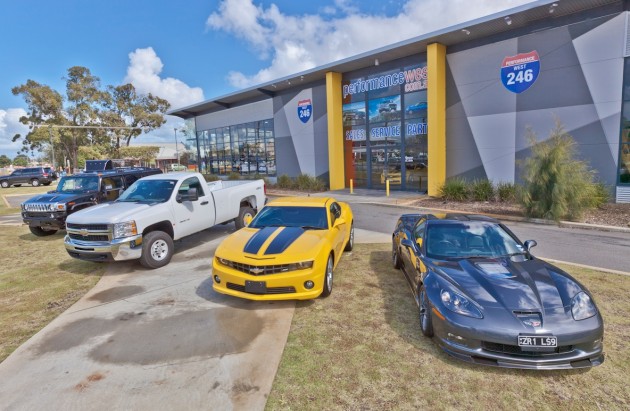 Performax’s newest dealer will stock cars from American heavy-hitters such as Chevrolet and Ford, like the 476kW supercharged Chevrolet Corvette ZR1, to the 318kW 6.2-litre Chevrolet Camaro, as well as the 2013 Ford Mustang.

Performance West will also have the mighty Chevrolet Silverado utility vehicle, equipped with the relentless 296kW/1037Nm Duramax 6.6-litre V8 turbo-diesel engine, offering a colossal towing capacity of 10.4-tonne. The equally-as-big Toyota Tundra is also soon to be available. All vehicles are converted to right-hand drive.

For almost 25 years, Performax International has completed all left-hand drive to right-hand drive conversions in-house at its workshop on the Sunshine Coast, in Queensland. All converted vehicles are re-engineered to Australian Government right-hand drive specifications, and carry ISO 9001 Quality Assured certification.

“We’ve already had excellent sales since taking on the dealership and are looking forward to another strong year as demand for these types of vehicles grow. WA buyers are becoming aware that there is now a one stop shop providing professional sales, parts and service at their doorstep.”

“These are big vehicles for a big state and we’re proud to have Performance West aboard to introduce them to more WA drivers.

“Peter Rullo is a well-known WA businessman and motorsport competitor and his understanding of performance vehicles should give added confidence to our customers.

For more info, head over to the Performance West website.