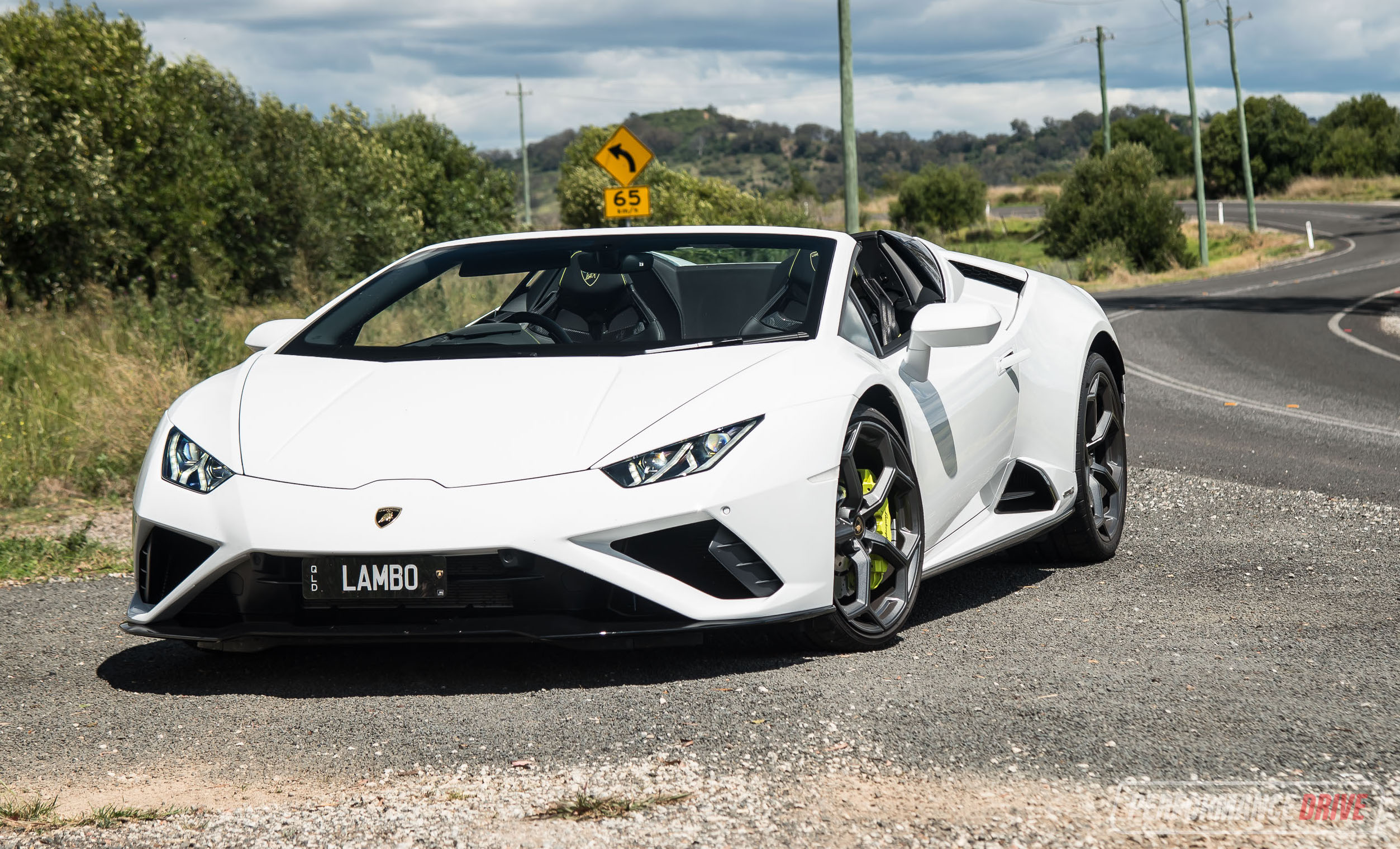 There aren’t many activities in life that cause your spine to tingle quite like it does when driving a Lamborghini. And here is one of the most driver-focused models it offers, the Huracan EVO RWD Spyder. 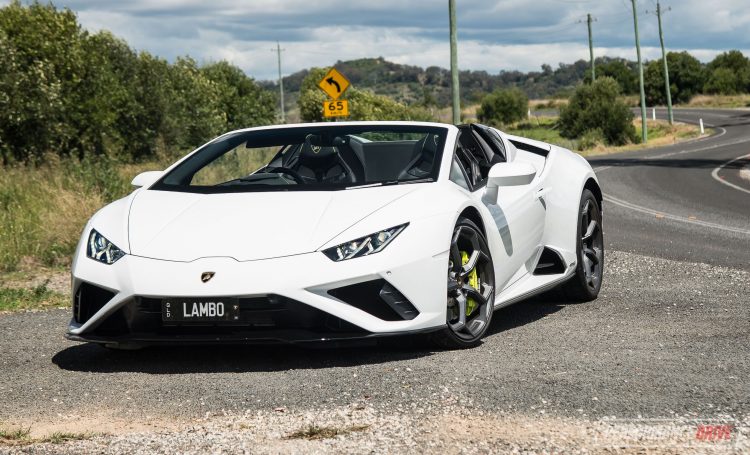 Based on the EVO, which debuted last year as the ‘greatest hits’ of Huracan variants, the RWD Spyder is rear-wheel drive as opposed to AWD. It features a 5.2-litre naturally aspirated V10 – arguably one of the last of the breed – hooked up to a ridiculously fast-shifting seven-speed dual-clutch automatic transmission.

Prices start from $422,606, however, a plethora of options and personalisation enhancements can see that price blow out to half a million pretty easily. For example, this test vehicle showcases around $90,000 worth of added bits and pieces. 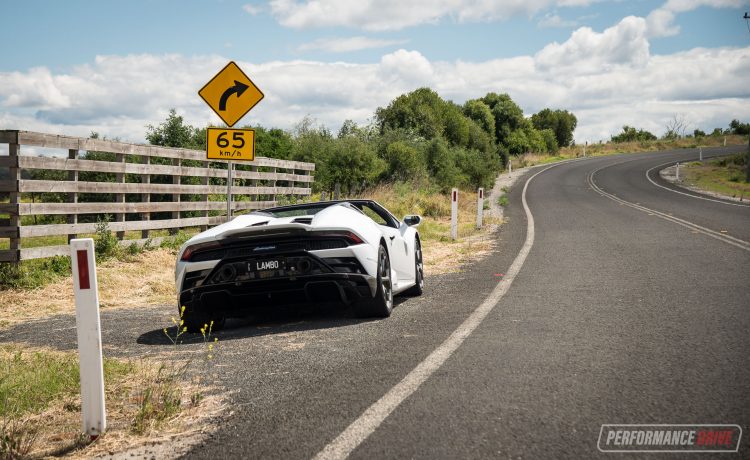 To most buyers at this end of the market, optional extras are an attraction rather than a hindrance or annoyance. The more the merrier, in other words. This is because, to the elite, exclusivity is key. Basically, you don’t want your neighbour driving around in the same car as you. Lamborghini offers a huge variety of colour and interior configurations, and some really special stuff via its Ad Personam department.

Taking a look at the spec sheet on this one, the biggest/most expensive options are the carbon-fibre-backed sports seats ($13,690), the Magneto-rheological suspension with nose-raising function ($12,970), and the 20-inch Aesir wheels in ‘Graphit Grey’ ($8410). Granted, we’d probably specify the same kit aside from the carbon seats. They are quite firm, and you can only see the naked carbon if you peer around to the backs. 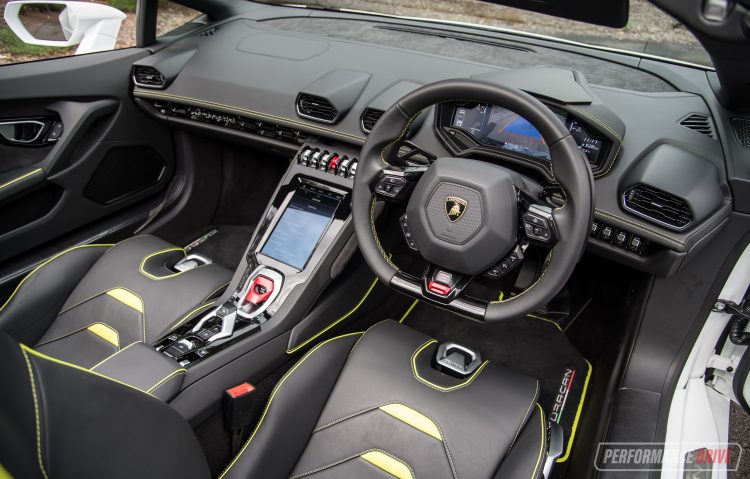 Some options are a bit silly. For example, something called “Lamborghini Smartphone Interface with Apple CarPlay” costs an extra $6480. Having the brake calipers painted in light green, as cool as they are, sets you back $4080. And a rear-view camera is $3850. In saying that, the footage from the rear camera is displayed within the digital instrument cluster, which is actually pretty clever.

The overall ambience in here is definitely exotic and luxury blended in equal balance. You’ve got exquisite and solid switchgear that seems to have some Audi influence, in a good way, while the latest touch-screen media interface is not only much more practical than the old instrument cluster setup, the new screen is filled with brilliant graphics and animations. 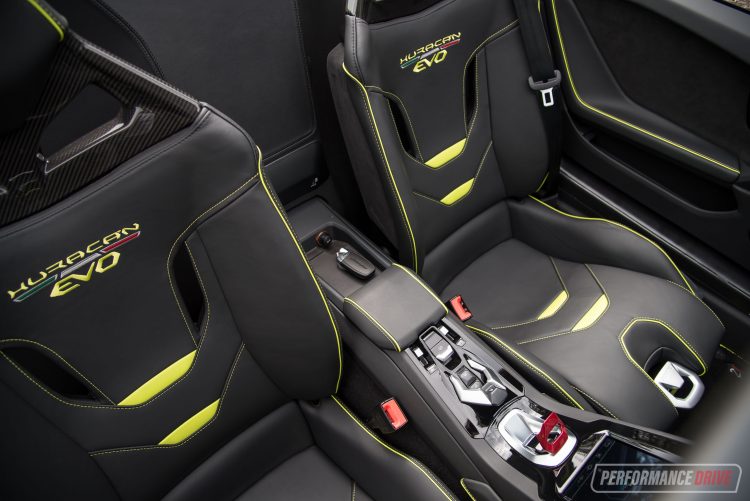 Seating space is good, with heaps of legroom available and obviously endless headroom if you have the roof down. With the roof up, headroom will be fine for most shapes and sizes, but getting in and out does require some effort. As the roof height is just 1165mm from the ground, you need to bend and get those leg muscles working. If you leave the roof down, parking in a garage for example, it is much easier to step in and out.

There isn’t much storage space around the cabin except for a very shallow centre console pad, thin door pockets, and a glove box. But this isn’t really a car for transport. It’s a car for fun. Under the bonnet at the front is a sizeable tub which fits a weekend bag with no trouble. 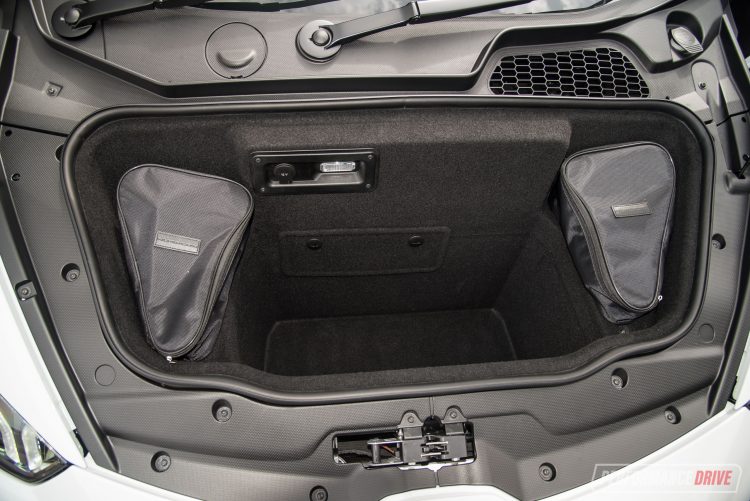 What’s it like driving a V10 supercar? Well, the sound alone is just bliss. There’s nothing quite like the eardrum-massaging shriek of this engine. Down low it has a distinct up-beat burble, like a super sports bike. Just feather the throttle and the engine abruptly quivers. Leave the pedal down a bit longer and it turns into a scream. A proper, sonorous scream.

Out on the road the engine becomes even more lively and characterful. Under load, even though this weighs just 1572kg, the engine barks and bellows before reaching a richer and deeper corner of its voicebox. Shifting manually via the paddle shifters also causes a racy pop sound between shifts. It is utterly magnificent. And this is all without accounting for the subsequent acceleration and speed that accompanies the song and dance. 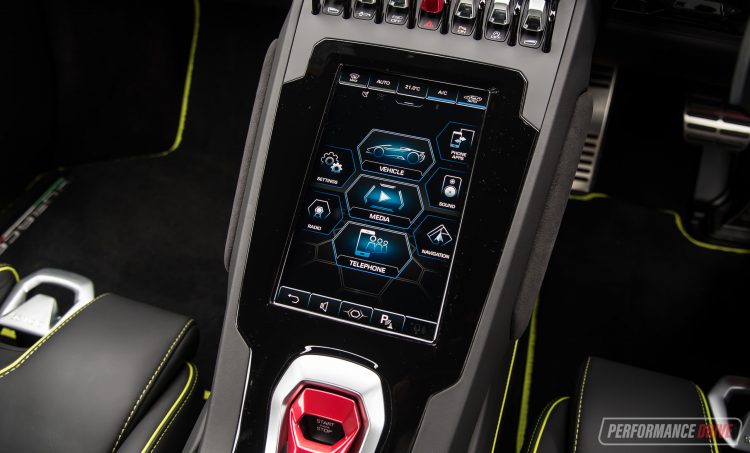 Being rear-wheel drive one might expect traction to be an issue. But it’s not. Unless you want it to be. During straight-line, full-throttle sprinting, with the traction control off, there is a mere puff of wheelspin in first gear as the engine reaches its peak power zone of 8000rpm. Peak torque doesn’t arrive until 6500rpm, so there are no surprises in terms of sudden or unexpected wheelspin – the beauty of natural aspiration.

There is still plenty of low-end grunt, don’t worry about that. But if you’re serious about acceleration, even then, the Lambo remains really controlled and stable. Despite being rear drive. That’s a good thing because it means a wider variety of drivers, in terms of skill level, can explore and appreciate what this machine is about without fear of running into a ditch. 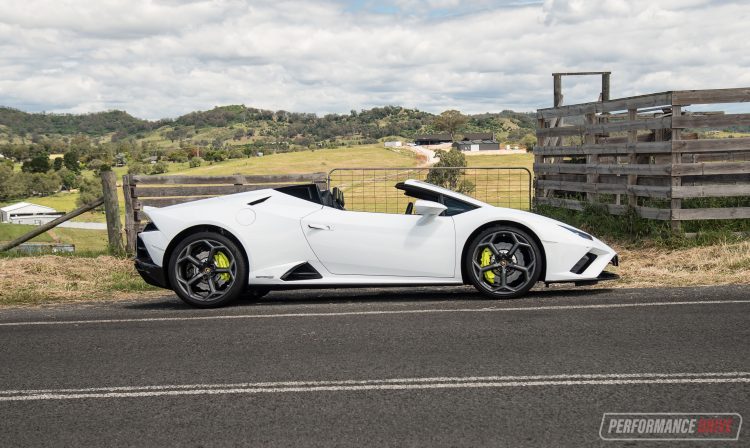 Poke it harder around bends and the tail does get a bit dancy. The weight of the engine pressing down on the 305/30 rear tyres means drifts don’t last long unless you’re really on it and keep the power down. For us, it’s the smaller hip wiggles just after the apex that excites most. Compared with the AWD models anyway.

If you do all of this with the roof down on a nice sunny day and on a beautiful deserted road, you’ll have the time of your life. And that’s what these types of cars are about. Pure driving enjoyment. 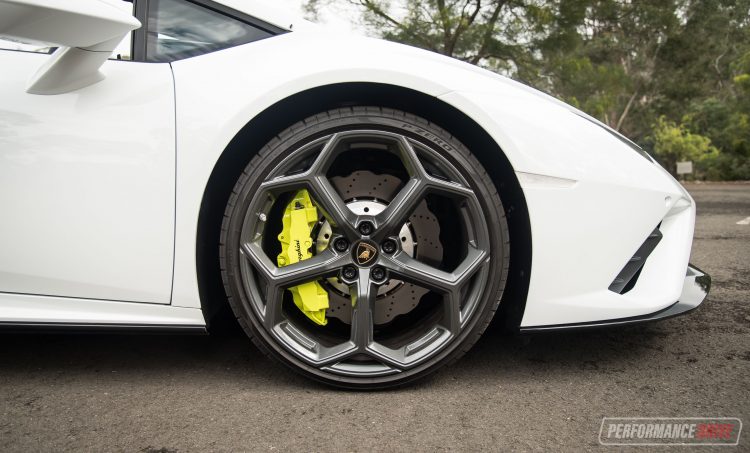 It probably seems ironic or even contradictory to say this, but it all feels very safe and balanced, too. For example, you might end up going pretty fast on a nice road, but you can always rely on the brakes. They are just as astonishing as the engine. Hit them hard and the car will centre itself and stop, immediately. A similar thing can be said about the handling. You can make sudden movements and the car responds instantly, pointing wherever you need it to go.

The ride is stiff but bearable. In the city where you might find poor quality roads with lots of broken slabs and road connections, the Huracan can become a little bit tiresome. However, that’s just a sacrifice of having very responsive handling. We’ve driven hot hatches that ride firmer than this, put it that way.

If we were in the market for a new supercar, this would definitely be up there as a serious contender. Having the Spyder adds that additional dimension of increasing sensory excitement, while the rear-wheel drive configuration means you can have a bit of fun in the corners, more so than the AWD.

The spectacular V10 will, no doubt, be a thing of the past in the not-too-distant future. That’s why we’d actually prefer it over some of the rivals, which are either turbocharged, have fewer cylinders, and/or run with hybrid systems. Nothing compares to the sound of a raw, honest, hard-working naturally aspirated engine. And with the latest and greatest tech, and in V10 form, built by the founders of the supercar, it doesn’t get much better.