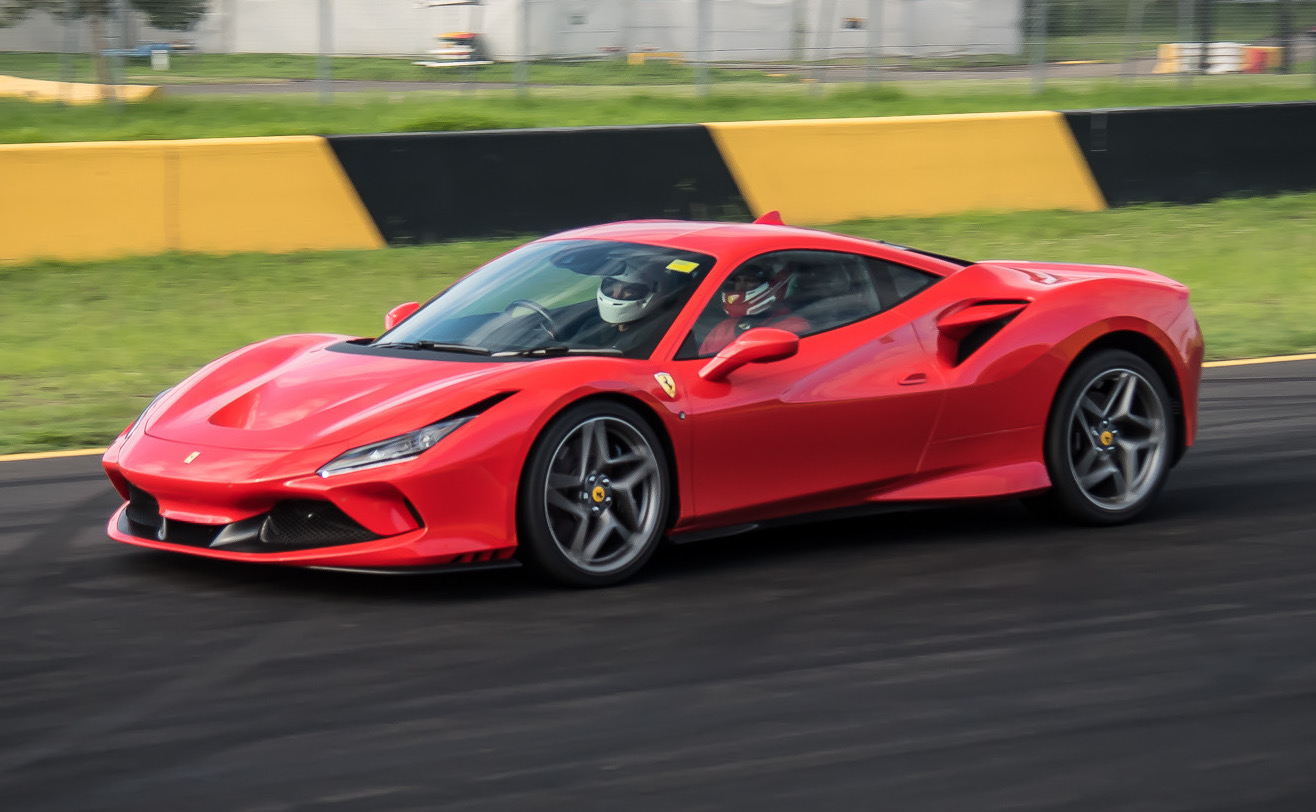 Welcome to the 2020 Ferrari F8 Tributo. This is the Italian marque’s new staple model, replacing the 488 GTB. But, as we found out during the official Australian media launch event at Sydney Motorsport Park, there’s nothing staple or regular about this machine. 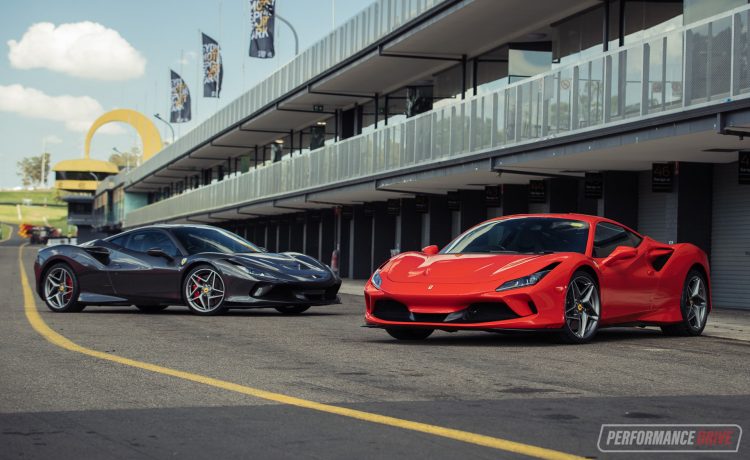 Granted, it does look pretty similar to the 488 after a quick glance. But rest assured this sexy beast is all new. It’s described as the highest expression of the marque’s classic two-seater berlinetta layout, and a tribute (hence the name) to the V8 engine that powers it, which is Ferrari’s most powerful V8 production engine it has ever made.

Despite seeming so simply reading the name, the F8 Tributo is not a limited edition or special build – well, it is a Ferrari and production will eventually stop. This is a new regular model in the showroom, and you can order one now. Prices start from $484,888 (excluding on-roads), which is $14,900 more than the 488 GTB. 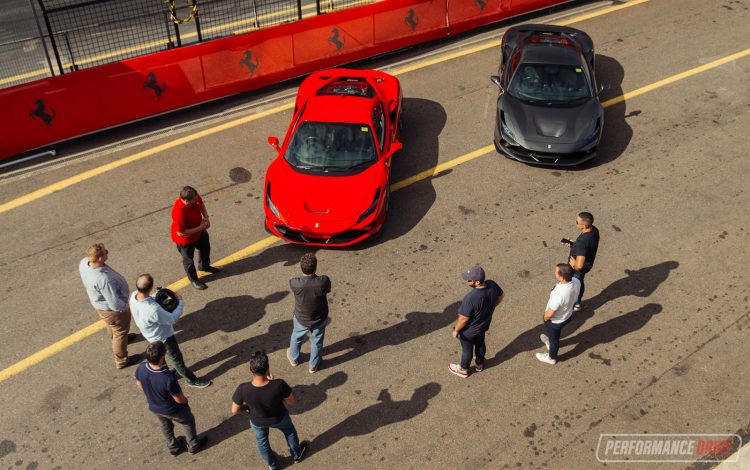 The F8 looks similar to the 488 because it’s pitched as a replacement to that car. On closer inspection though, there is so much attention to detail here, and every single part is freshly-crafted to enhance the driving dynamics and improve the aerodynamics and performance. Over and above the 488.

Starting with the body and design. It was all created with technology and experience directly derived from Formula 1. In fact, the Ferrari engineers that helped create this bodywork and all of the aero are the same team of people who work on the F1 cars. This isn’t just motorsport-inspired. It is actually motorsport stuff.

At the front is the prominent S-Duct, which is an innovation taken from Ferrari’s F1 endeavours, and is evolved from a similar system featured on the track-focused 488 Pista. Essentially, it’s a tunnel for airflow to be scooped into, and then rapidly ejected from an opening in the bonnet. This process, at speed, creates downforce on the front end. So much so that there’s 15 per cent more front end downforce than on the 488 GTB. 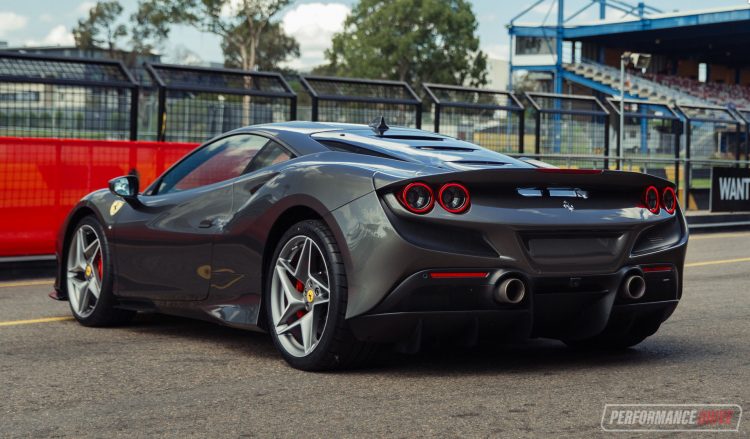 Under the F8 are a set of vortex generators. These are basically a set of curved fins that direct airflow from the middle of the underbody, pushing it outwards. Again, this causes suction, pulling the car to the ground. Ferrari says these provide a 25 per cent increase in downforce.

And then at the back there is a new diffuser system with active flaps. The flaps rotate downward by 14 degrees during straight-line high-speed driving, negating the effects of the diffuser and reducing drag. During hard corning with the new diffuser in its normal position, along with a new integrated spoiler up top, downforce is increased by 20 per cent and 25 per cent in these areas, respectively.

There’s no doubt the F8’s bodywork is a technological masterpiece. But we mustn’t forget, it also has to look good. And it does. We particularly love the louvred rear windscreen which is made from lightweight Lexan. Its design is inspired by a similar setup seen on the Ferrari F40. The pointed nose, including the new LED, vertical-oriented headlights complete with special intake nostrils, also speak pure exotica. 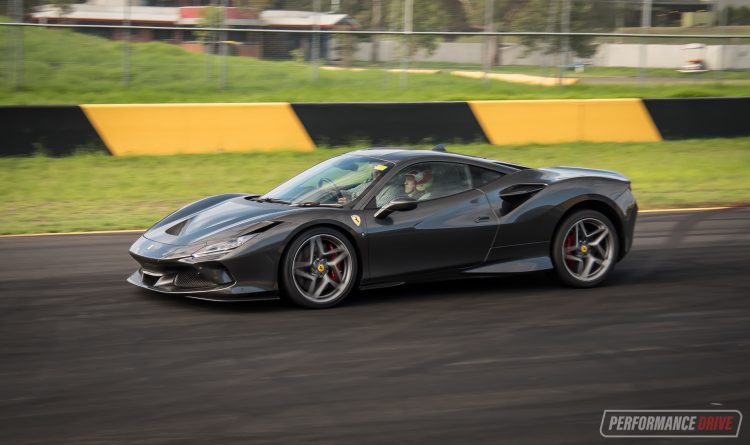 One of the challenges that Ferrari engineers faced in coming up with the design was the fact that it had to produce more downforce than the predecessor, but also less drag. In other words, it’s easy to fit big wings and so on to increase downforce but this means there is a lot more drag, which isn’t good for speed or fuel economy. When you look at the F8 Tributo you’ll notice the body is actually really clean-swept, with no big protrusions to tarnish or disrupt the airflow.

Like the exterior, the interior is also very clean and clutter-free. Up on the dash you won’t find a big central touch-screen. Instead, it’s all housed within the left digital screen within the instrument cluster. That might seem clunky, but the controls are still on the dash like normal, with a home button, volume knob, and favourites menu within easy reach. 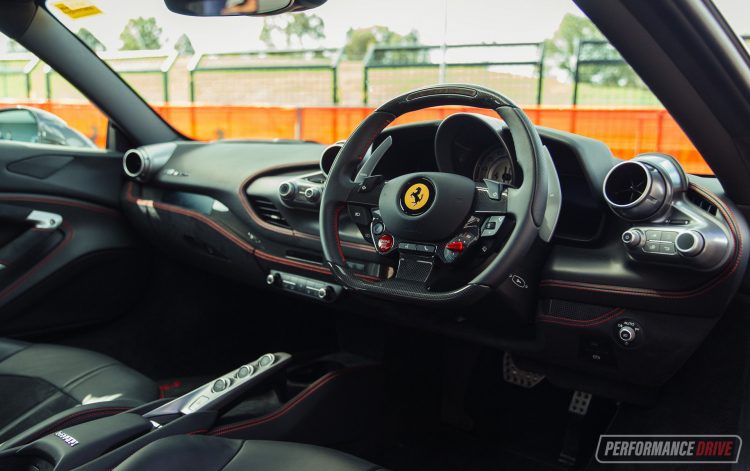 What about the passenger? Well, Ferrari offers an optional 7.0-inch screen for that side of the dashboard. It’s a touch-screen unit and allows the passenger to scroll through various displays and even toggle through the media and view real-time driving stats.

There’s plenty of room to move about in here, and the new seats feel great. There is a small tray for your mobile phone under the three-button gear selector ‘bridge’, and another tray behind the centre armrest. For more space you have a 200L boot under the bonnet.

Let’s start with the engine. It’s based on the F154-series used in many modern Ferraris and some Maseratis – Ferrari use a flat-plane crank and Maserati adopts a more conventional cross-plane design. Here, it is in its most powerful form. In fact, it is the most powerful production V8 Ferrari has ever made.

At 7000rpm it produces a whopping 530kW (720PS). At 3250rpm you receive a massive hit of 770Nm. This is chiefly thanks to a pair of turbochargers, but also thanks to many other very high-tech and exotic-sounding componentry. We won’t go over them all as that would take all day (and a science degree to comprehend it all), but some of the highlights include titanium conrods, Inconel exhaust manifolds, special DCL-coated piston pins like what are used in F1, and a lighter crank and flywheel than those featured on the 488.

The engine is also made stronger to handle the extra pressure, and it is also, remarkably, 18kg lighter overall than the 488 GTB’s engine. The weight of rotating mass is reduced too, by 17 per cent. It just keeps going and going, with more and more evolution. If you ever thought the combustion engine was as evolved as it can be, you need to take a close look at this unit. 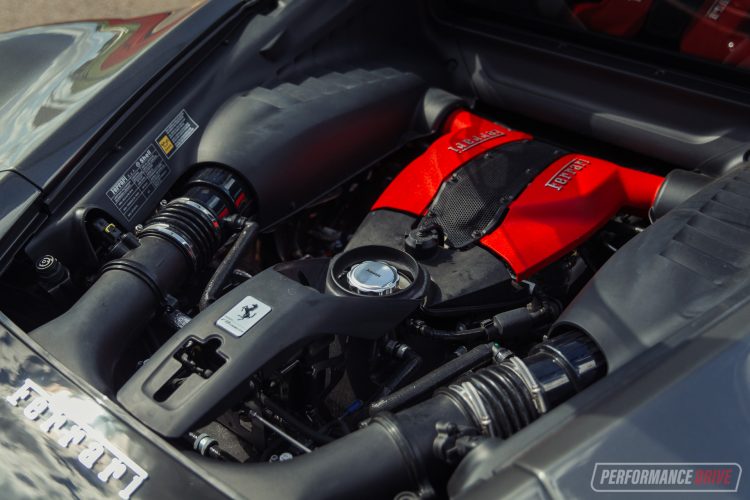 Out on the track the engine offers an immediate and forceful demeanour. Torque isn’t really a good word to describe it. It’s like it offers three-dimensional torque or something from another dimension. And that’s remembering it is just a 3.9L unit.

Yes, the sound isn’t as spine-tingling as the naturally aspirated, high-revving units of yesteryear. However, the redline cutoff is still quite high here, at 8000rpm. And Ferrari has introduced a new “wall effect” redline. Instead of gradually cutting revs as you approach the limiter, this cuts it straight at 8000rpm. This, Ferrari says, maximises the power right up to the limit of driving, “improving lap times”.

What also doesn’t help with the soundtrack though is the fitment of a particulate filter within the exhaust. You can’t blame Ferrari for this. This is simply to adhere to the latest homologation standards to reduce emissions. That’s not to say the engine sounds terrible. We think it sounds a bit like an extremely high-strung V6 race motor, or even a big-capacity superbike engine. Ferrari says the sound is, nonetheless, 5dB louder than the 488 GTB. 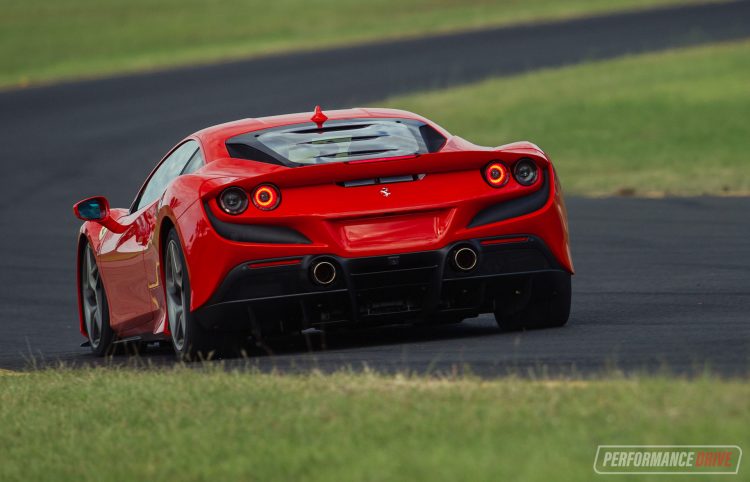 Even though you have just over 700hp on tap, the F8 Tributo doesn’t feel intimidating to drive. Yes, we did only drive it on the track where there is loads of room for plenty of wide-open throttle. However, the power and torque delivery, and the steering and brakes, are all very linear and progressive. It will only respond to your demands.

Ferrari has introduced a ‘6.1’ version of its Ferrari Dynamic Enhancer Plus platform, too. You have a number of driving modes to select from on the steering-wheel-mounted ‘manettino’ switch, including an updated Race mode that allows plenty of slip and play, including almost fool-proof drifting at big angles.

We say “almost fool-proof” because one of the Ferrari driving instructors told us you can still spin the car around if you do something really silly behind the wheel. Although, the system will try very hard to reduce the chance of this happening, or at least reduce the severity of the spin. There is also a Side Slip Angle Control system so you can literally adjust the amount of head-turn you want as you peer out the side window when drifting.

After our short drive, the main thing we take away from the F8 Tributo is the absolute relentless power and speed it offers. And the sheer ease with which it is all handled by the chassis, steering and brakes. Absolute control and confidence, even at the hairiest end of audacity. This is our new favourite production car. Can we have the dark grey one, please?