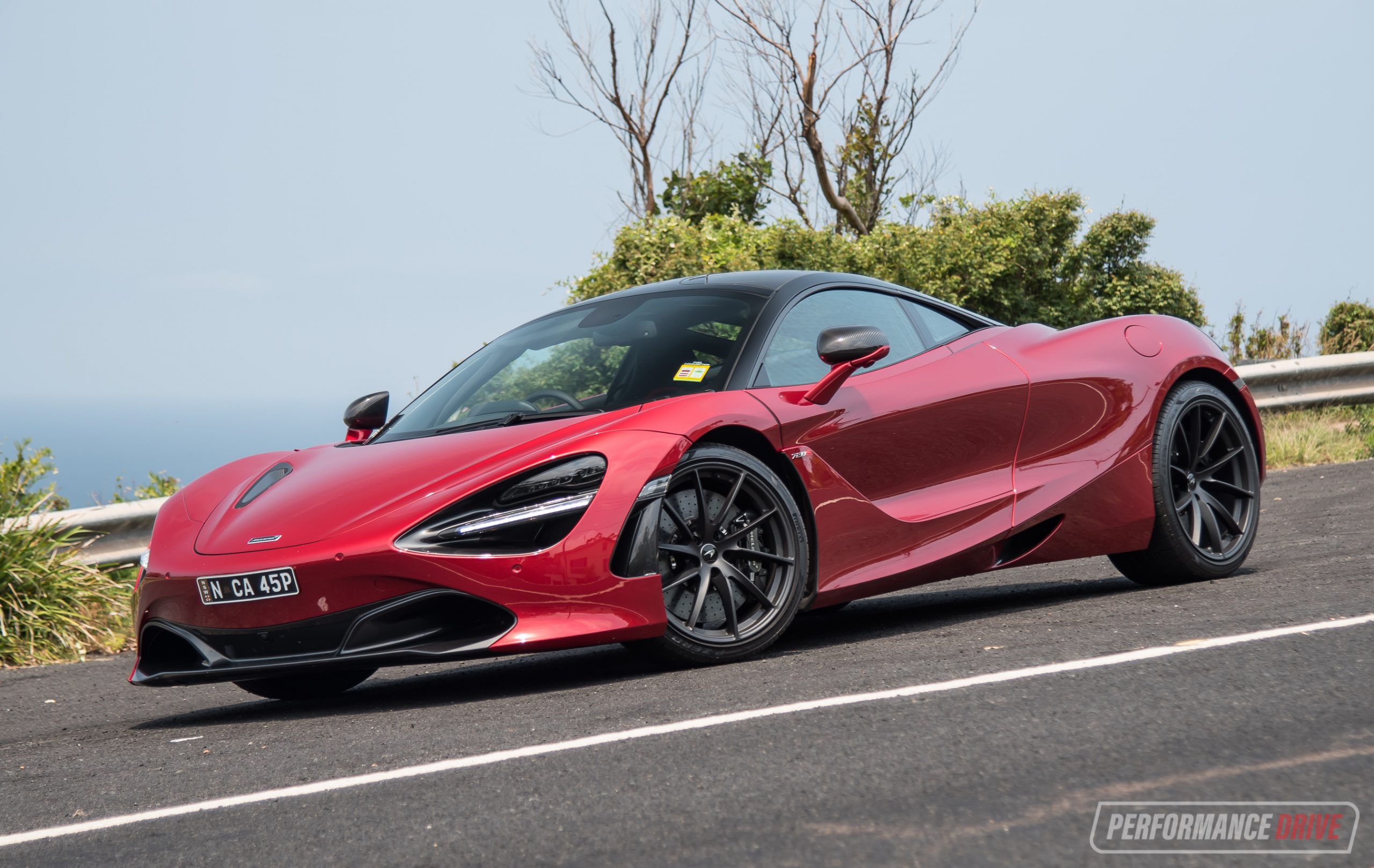 Welcome to the quickest vehicle we’ve ever tested. That’s right. In almost ten years of testing vehicles, the McLaren 720S has shown us the best numbers we’ve ever seen. We’d better take a closer look. 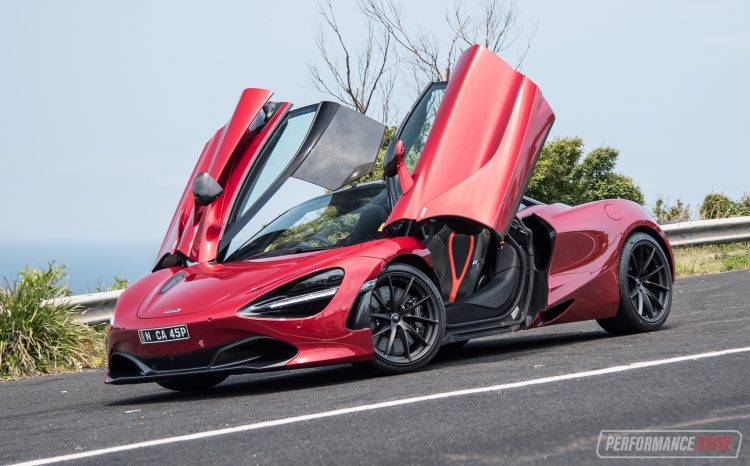 The 720S sits in the Super Series section of McLaren Automotive’s lustrous range. And in Australia it is pretty much the flagship road-legal production car from the brand, considering any others that might top it are either sold out or not eligible for road registration in this country (such as the P1).

Not only could it be regarded as the flagship McLaren and the quickest vehicle we’ve ever tested, it is also one of the most powerful production cars currently on sale in Australia. Its 4.0-litre twin-turbo V8 screams and roars its way to 7250rpm (or an 8500rpm redline, if you wish) where it unleashes 530kW. That’s 720PS (metric horsepower), hence the name.

Despite these feats, the 720S is not as crazy-expensive as you might think. Prices start from $499,000 (excluding on-road costs). For comparison, its nearest competitor, in terms of performance, would have to be the Ferrari F8 Tributo (also 530kW), which is priced from $484,888. 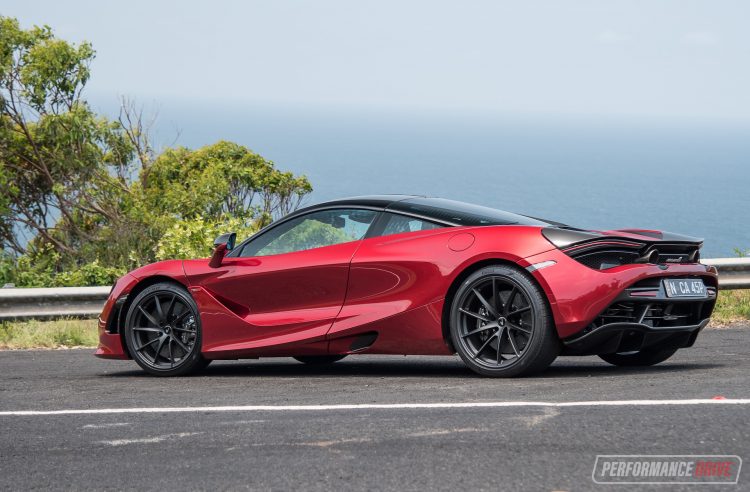 When you’re associating yourself with vehicles of this calibre, it’s important to make a proper entrance wherever you go. And the 720S ensures this with its dihedral, double-hinged, up-swinging doors. There is a minor practicality benefit to these, despite the sudden wow-factor, as they don’t require as much overall width to open compared with regular, peasant-spec doors. However, they can make you look a bit of a fool if you’re an amateur supercar driver.

For example, you can’t just pop down the shops and swiftly enter or exit the car. These actions require a certain amount of grace and style. Really, you need to hop out like you’re posing for a cover shot for GQ magazine. In contrast to this, just personally, I enjoyed getting out in my worst clothes and most worn shoes for maximum juxtaposition. The reactions from onlookers is priceless. 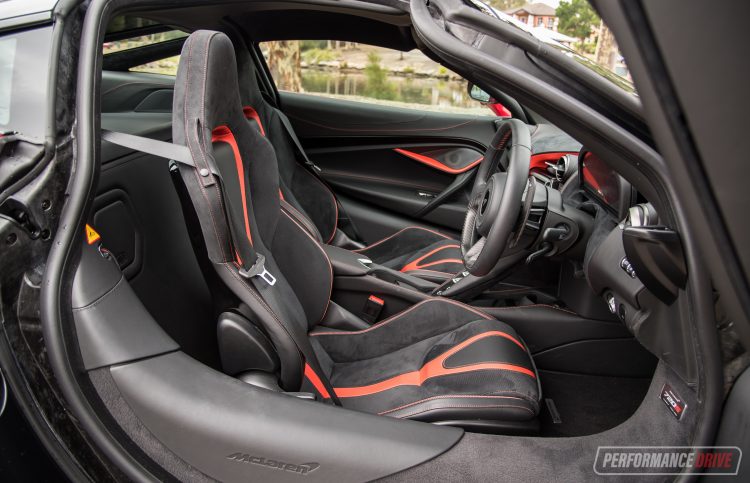 Once you’re in the 720S it’s actually quite a comfortable and civilised place to be. Snug? Yeah, a bit. But not cramped, for this sort of vehicle anyway. The seats are nicely padded and in all of the right areas, with soft cushioning for the load-bearing bits. Forward visibility is also excellent thanks to the dome-like windscreen that wraps wide and stretches very low.

Even looking through the rear windscreen, if you can call it that, the view is pretty clear. The window is split into three parts, with a tinted middle section and angled side columns. Point being, they do provide a decent view, at least enough to give you a good understanding of what’s behind you. Just in front of the window is a handy parcel shelf which is large enough to store a backpack or hand bag. 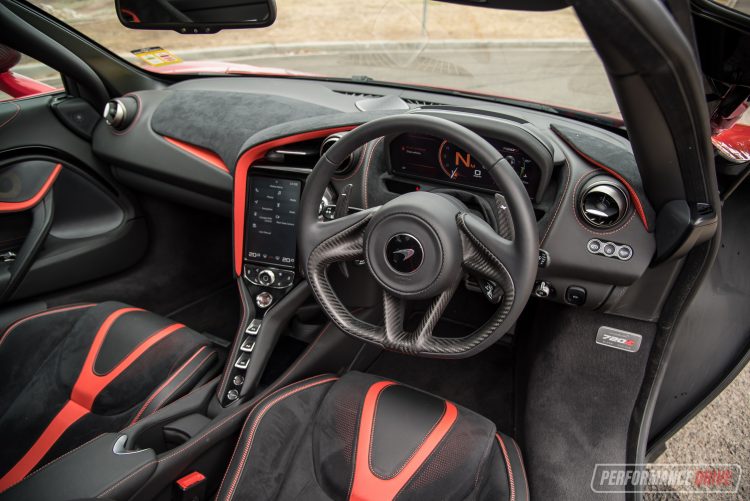 All of this so-called practicality is all thanks to the carbon fibre Monocage II structure that has been designed to be extremely strong and rigid, allowing thin A-pillars, glazed C-pillars, and a long-spanning rear window. The canopy-like design with its 360-degree view sets a new benchmark for visibility in the supercar class, according to McLaren.

Entertainment is brought to you by McLaren’s 8.0-inch touch-screen interface which is paired up to a four-speaker sound system as standard. If that doesn’t sound appealing enough, you can option for a high-end Bowers & Wilkins 12-speaker setup, adding an eye-opening $9740 to the bill. Speaking of options, a rear-view camera system will set you back $2945, or, if you really want to splash out you can get a 360-degree camera setup, as featured here, costing an insane $9785. 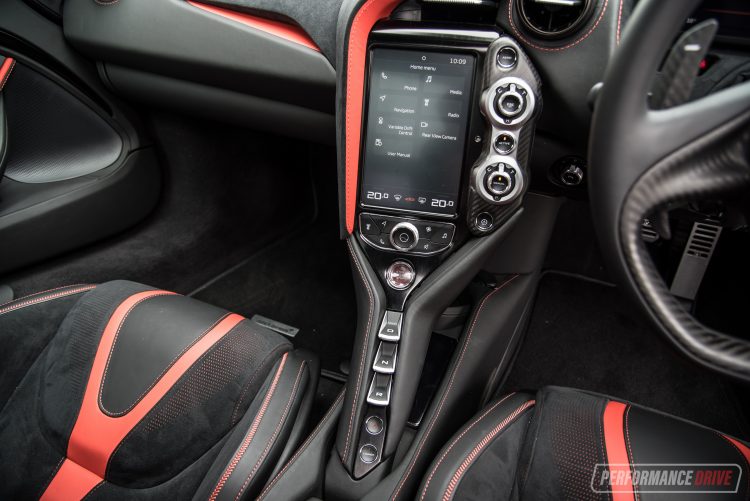 Getting back to that screen, it isn’t the most comprehensive nor the most in-depth interface out there. The graphics are good and clear but the colour palette is mostly black and white and the menu layout is quite basic. Though, it is user-friendly. We also like that there is, what feels like, a plastic screen over the top so it doesn’t show up all of your finger smudges.

Up front there is a useable boot, measuring 150 litres. There’s a netted pocket for smaller items and a 12V socket to power up any accessories you might want to cart around with you. 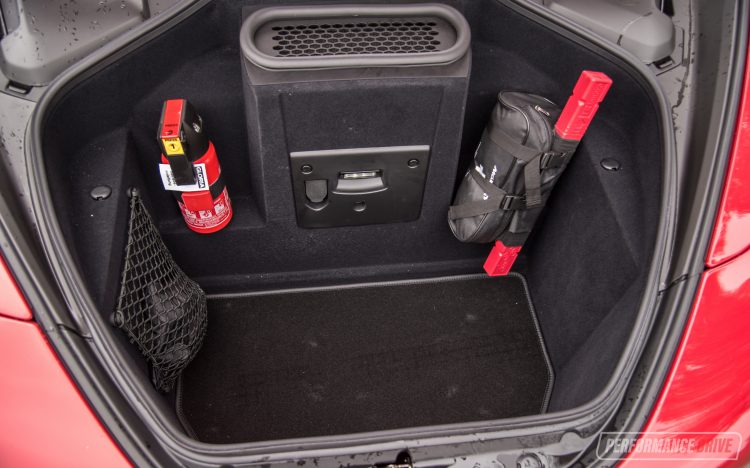 If you want a car that, straight out of the packet, offers incredibly immense, almost life-changing speed and acceleration, you’re definitely in the right direction with the 720S. This thing absolutely flies. As mentioned at the start, it is the quickest car we’ve ever tested. So, what are the numbers? 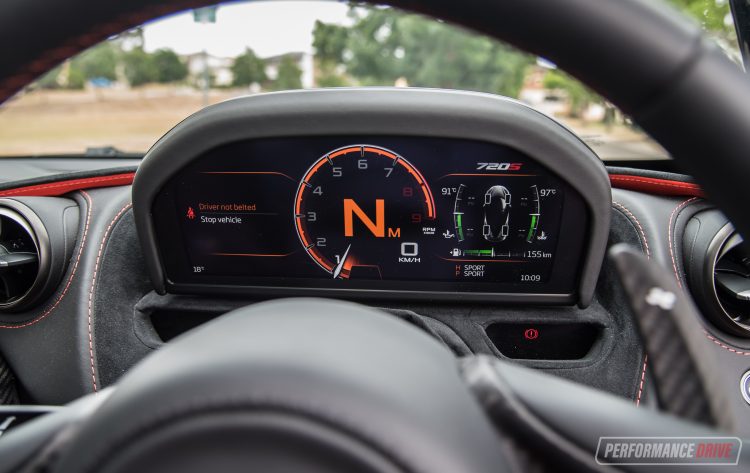 As you can probably see just by these numbers, the 720S is built for top end speed. And it feels it. Once you get past the initial turbo-lag, the surging momentum blows your mind. Behind the wheel there aren’t many experiences on Earth that give you such a huge rush of never-ending acceleration and g-force. We think a quicker real-world 0-100km/h time is definitely possible, too. Our tests were conducted in less-than-favourable warm conditions, and we didn’t do as many runs as we usually do because we were limited on time and distance with this vehicle loan.

Much of this colossal performance is due to the available torque. At 5500rpm you’re hit with the enormous force of 770Nm. 770Nm is mega, especially for a 4.0-litre engine. The ‘M480T’ engine was brand new at the time of the 720S’s debut, featuring fast-spooling twin-scroll turbochargers with titanium-aluminium turbines, electronic wastegates that let off a cool ‘p-tshhh’ sneeze on throttle lift, and lightweight pistons, conrods and crankshaft. 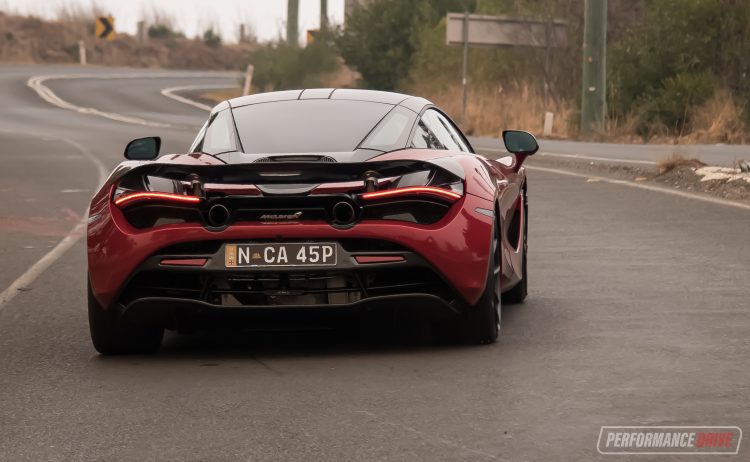 The motor is connected up to a seven-speed dual-clutch auto which has been recalibrated over previous models (like the 650S) to offer even sharper shifts, as well as smoother ones during calm driving conditions. You can play around with the shifting characteristics as well, using the drive mode select system. It offers two main control parameters, including the chassis (suspension) and the powertrain (including the transmission). First you need to activate the system with the ‘Active’ button, then you can choose between Comfort, Sport, and Track modes for both parameters.

Around corners the 720S is just as amazing as it is in a straight line. McLaren debuted a new Proactive Chassis Control II technology to help ensure this, as well as all-new, lightweight double wishbones that reduce unsprung mass by 16kg over the equivalent predecessor. What this all means is that it simply rails around corners with utter conviction and confidence, with equal measures of control and compliance. 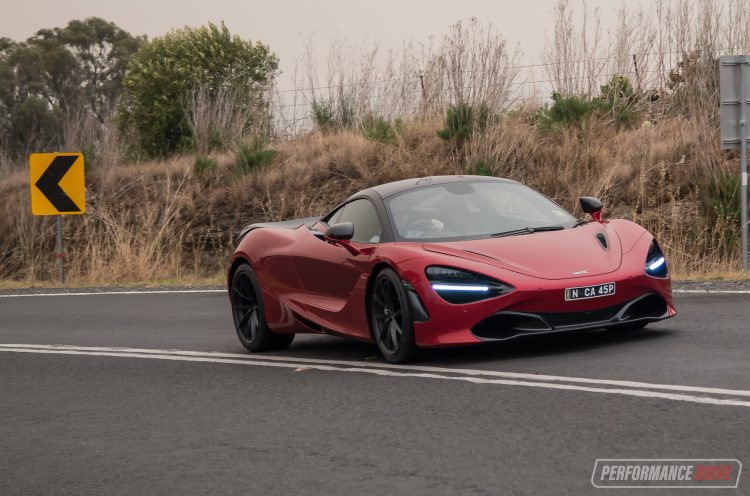 Even if you hit nasty bumps, the 720S doesn’t crash or bang, or bounce out of the lane for that matter. Despite being such a low-slung vehicle. And with a very low centre of gravity, the potential cornering g-forces can turn your stomach upside down. Rear end traction is surprisingly good, despite all of that torque. With the engine nestled behind the cabin it obviously helps to press some weight onto the rear wheels. The big hydraulic wing also adds downforce at speed, and doubles as an airbrake.

But, if traction isn’t necessarily your ambition, the 720S can drift quite playfully. You can use all of that power to essentially powerslide through corners, controlling the angle purely with your right foot. To help with this the 720S even comes with something called Variable Drift Control. Yep, you read correctly. The stability control system can facilitate drifting, and you can adjust the slide angle and degree of opposite lock you’d like to experience. It’s awesome.

The steering is also beautifully engaging. It feels mechanical, even though it is an electro-hydraulic arrangement, providing you with high levels of precision and sharpness. Which, to be honest, is what you need; the speed climbs so fast in between corners in this, you need something you can seriously depend on.

Lastly, speaking of depending on things, the brakes. They are intensely powerful, pulling up the 1431kg powerhouse with no trouble at all, from any speed, and with repeatable performance. We timed an emergency stop from 100-0km/h in just 32.98 metres. Out of curiosity, we tried three consecutive runs and recorded very similar results each time. 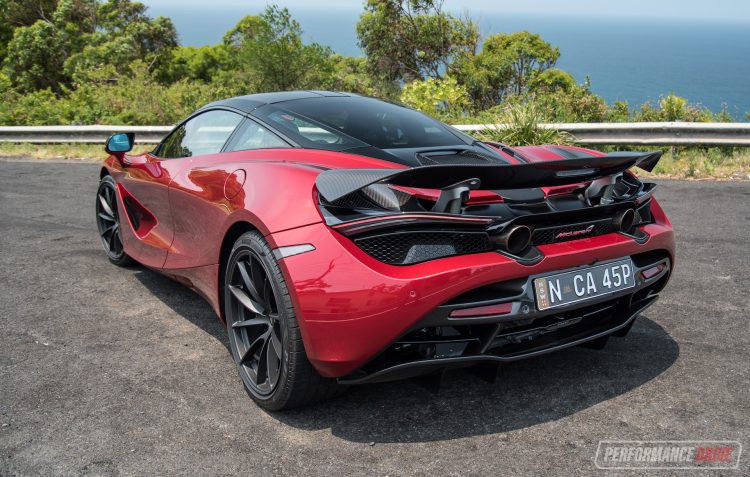 This is stunning piece of machinery. It defies what you may have thought was possible from a road-legal vehicle, both in terms of performance and practicality. It’s really easy to drive in normal conditions – you don’t need a special licence or anything like that – and you can see out of it and even store some luggage. Yet, it’s also tantalisingly tempting and approachable enough to blast up your favourite mountain route. The only real downside is the fact that you can’t really explore its awe-inspiring performance on a daily basis, as you’ll soon lose your licence.

CONS:
– Some turbo-lag (although it adds to the excitement)
– Too fast for Australian roads?