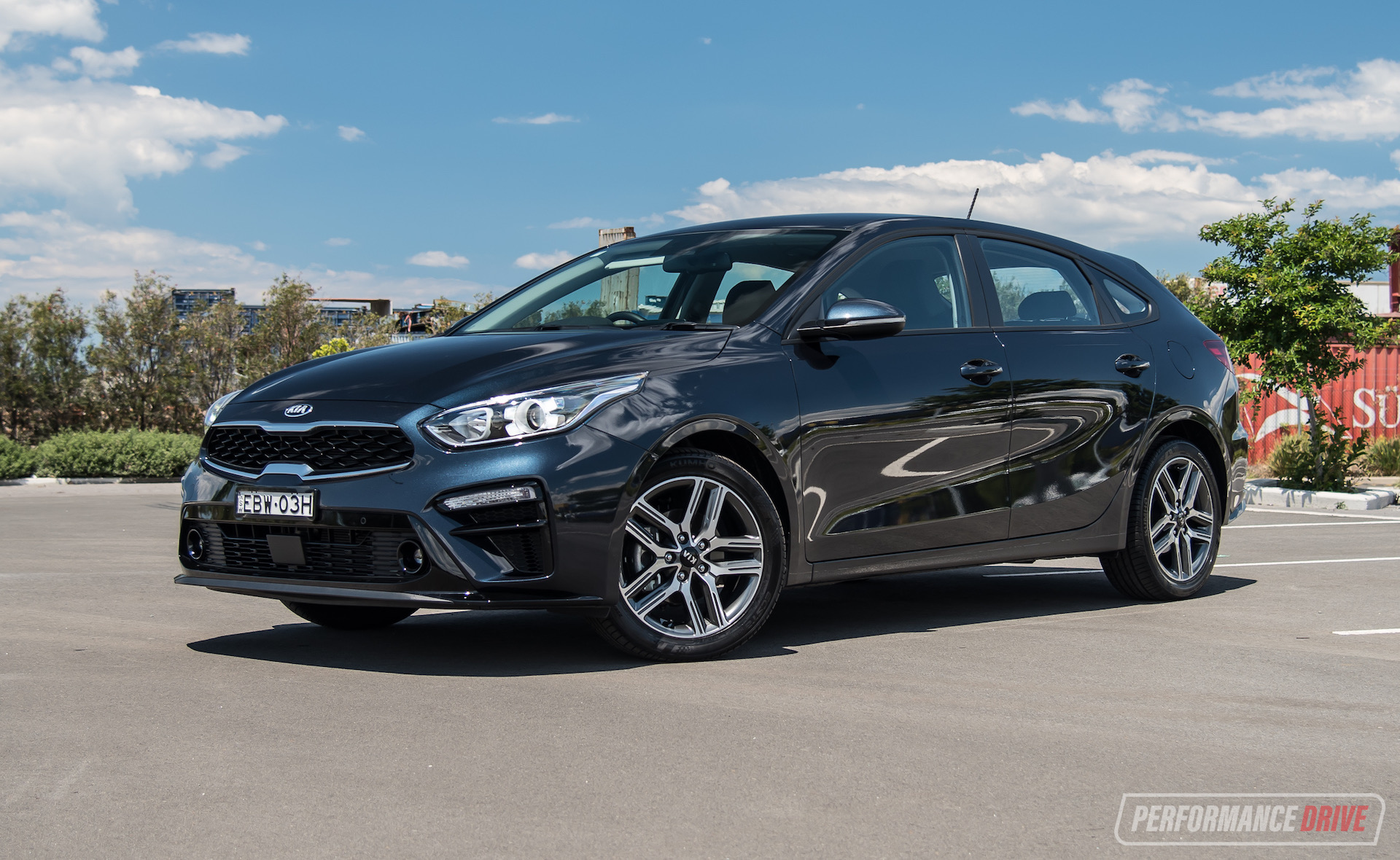 The Cerato is yet another success story from Kia. With 21,757 sold in Australia in 2019 according to VFACTS, up 16.8 per cent on 2018, it is the fourth most popular small car on the market and the ninth favourite overall out of all vehicle categories. 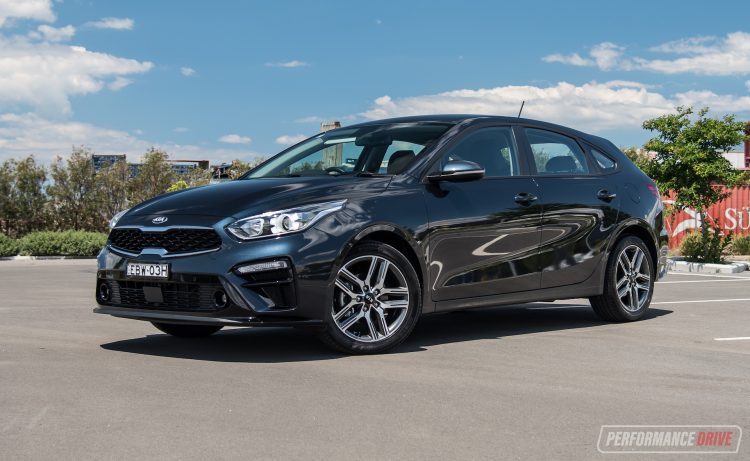 Available in sedan or hatch, and in S, Sport, Sport+, and flagship GT trim, the range is extensive. Prices start from a low $20,990 for the S sedan or hatch with a manual transmission, and go up to $32,990 for the auto-only GT sedan or hatch (seven-speed dual-clutch auto). Strangely, a six-speed auto for the S and Sport commands an extra $2800, with no manual available for the Sport+ or GT. All models but the top-spec GT are fitted with a naturally aspirated 2.0-litre four-cylinder petrol engine that produces 112kW of power and 192Nm of torque.

For this review we’re testing the base model S sedan with the manual (white car pictured), as well as the Sport+ hatch (dark blue) with the conventional six-speed auto. 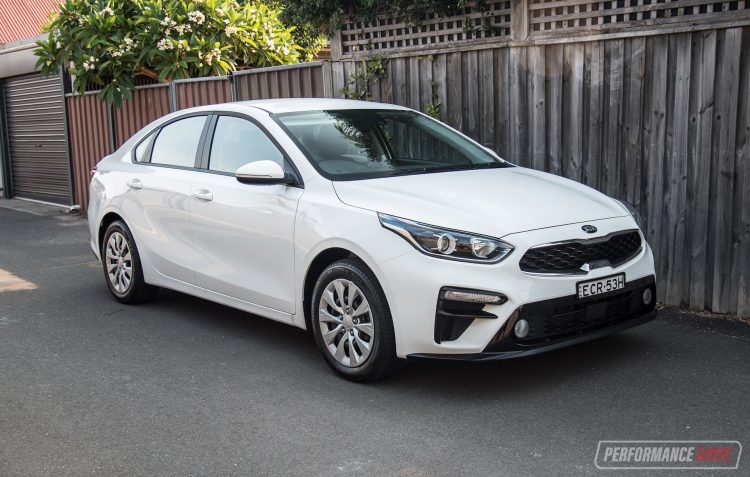 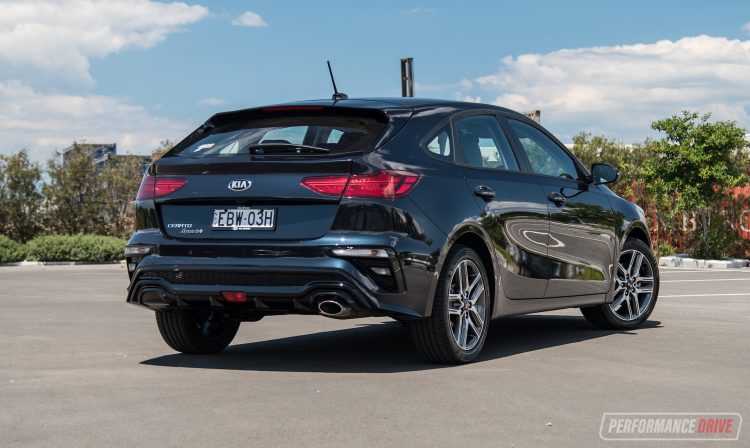 You get a generous feature list in the S for the price. Up on the dash sits an 8.0-inch touch-screen media interface with Android Auto and Apple CarPlay connectivity, shared with the rest of the range. It does miss out on sat-nav as featured in all other variants, despite being the same unit. You still get USB, Bluetooth and aux-in support though, as well as digital radio. The screen provides a view for the standard rear-view camera, complete with dynamic parking guidelines for all variants. This is really impressive stuff for a base-spec model.

Autonomous emergency braking with forward collision warning, lane keeping assist, daytime running lights (halogen on S and LED for Sport+) and dusk-sensing headlights, and driver attention alert are also standard. But, going for the Sport+ adds in blind-spot protection, pedestrian and cyclist detection, and rear cross-traffic alert. As a result, the S (and Sport) has been given a four-star ANCAP safety rating while the Sport+ (and the GT) get the full five stars. It’s a pity that wireless phone charging is only offered with the GT, although all models come with two USB ports and a 12V socket. 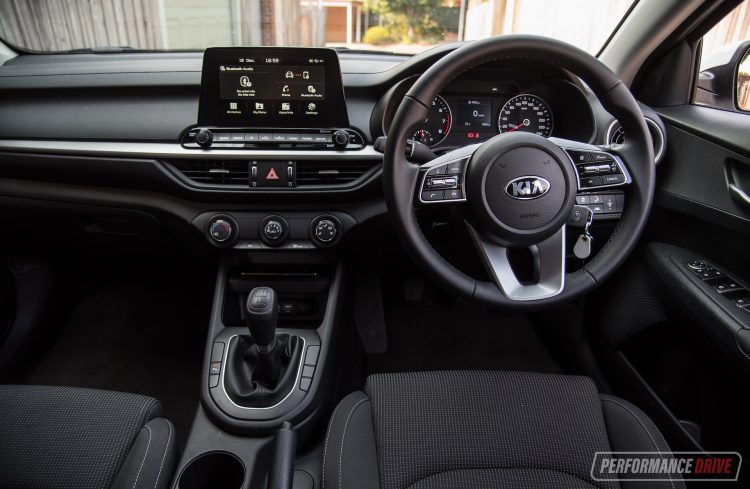 The interior presents great style and practicality for this market level. We love the updated gear shifter and the soft-touch buttons. They give off a real premium feel; not something we were expecting from a budget-focused product. The dash is well laid out and very easy to navigate, and buttons for the climate are kept separate to the touchscreen which tends to reduce distraction while driving.

There are some hard plastics around, but they are in the areas that matter the least. And there are plenty of storage holes to dump your belongings into. The centre storage bin is huge for a small car, with a nifty two-tier shelf above the gear stick, and the cup holders in the centre console and doors are big enough to fit a 1L bottle. 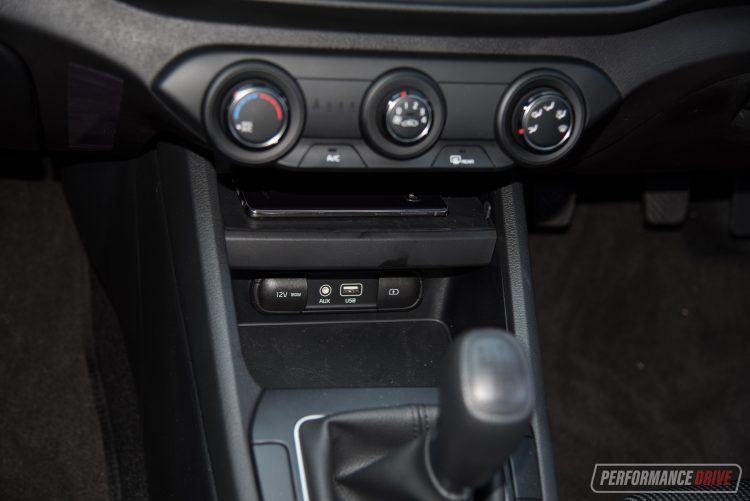 The Sport+ receives notably more comfortable and more supportive leather-appointed seats over the S (a blend of genuine leather, polyurethane and other man-made materials, or a combination, according to Kia). But again, the base S isn’t too bad at all for overall decor and features considering its calibre. Passenger room in the front is very generous, and the manually-adjustable seats can be rolled right back for the tallest of drivers. The space feels airy and there are no silly design shapes protruding awkwardly. 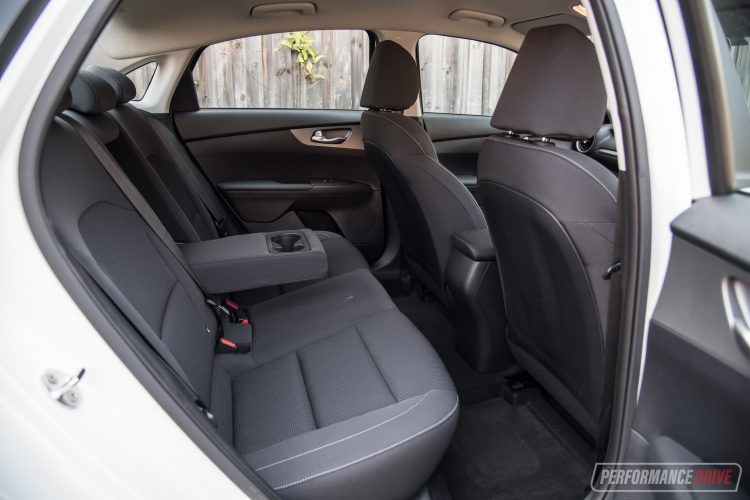 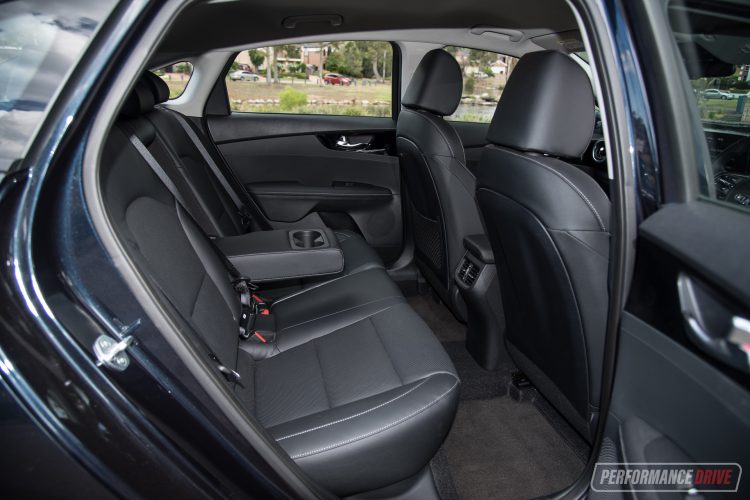 In the back it feels a lot more spacious than the competing Toyota Corolla and Mazda3, for example, and even surpassing its brother, the i30, by a decent smidgen (wheelbase is 50mm longer in the Cerato). In S form there are no climate vents in the back, but you still get cup and bottle holders.

Thanks to some poaching of ex-Volkswagen and Audi chief designer Peter Schreyer, all Kia models from 2017 onwards look brilliant we think. The Cerato shares the same underpinnings as its twin company’s Hyundai i30, but, as you can see, they look quite different. The Cerato hatch is more stretched with a longer boot and offers more boot space than the i30; 428L vs 395L. It’s shaped a bit like the old liftbacks from the late ’90s. We think it looks stylish but not too outrageous. 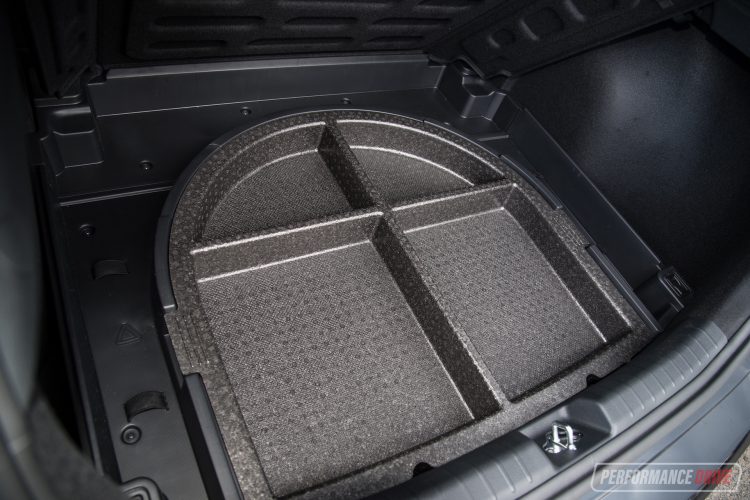 Over in the sedan it is much more conventional, and surprisingly the boot space grows to 502L. Underneath the floor is a space-saver spare wheel in the S, while the Sport+ hatch features a neat storage tray on top of the space-saver spare. In either case, the boot really frightens many of the rivals and should be seriously considered if this area is important to you. 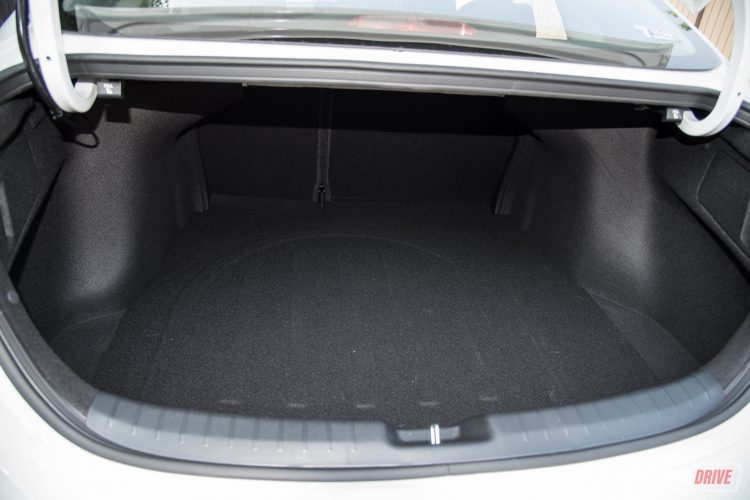 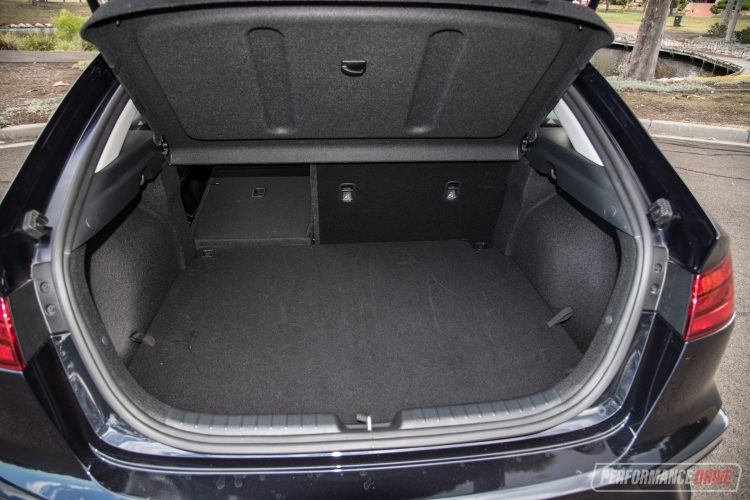 As a practical run-around vehicle, the Cerato is really easy to drive and offers excellent visibility. Most drivers will instantly become familiar with the controls so there’s none of that hesitation while you browse to find something, with a simple arrangement of buttons on the steering wheel for the really common stuff. The big and airy cabin also helps with relaxation, reducing fatigue during long journeys.

Having driven the superb GT (reviewed here), the 2.0L and the 1.6T are worlds apart in performance, as you’d expect. But according to our clock (aka, Racelogic Vbox), the Cerato, even with the 2.0L engine, performs okay compared with many of the equivalent rivals. We timed 0-100km/h in 9.06 seconds in the manual and 9.92 in the slightly heavier (1295kg vs 1345kg) Sport+ auto. Obviously these times aren’t going to set your world on fire but they are very reasonable for this class, particularly given there is only 112kW on offer. 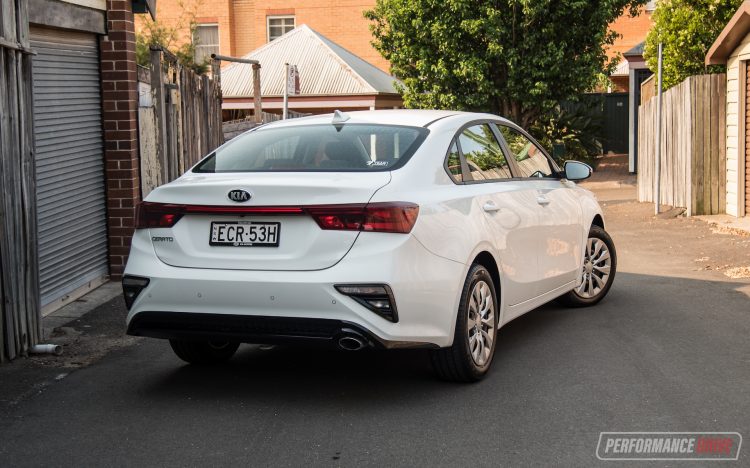 Without a turbo means it can feel drained and underpowered at specific parts of the rev range. Peak torque isn’t reached until 4000rpm, so, anything below that can make the car feel sluggish. That’s if you’re expecting more from it and pushing it. If you’re only driving casually and applying very mild throttle, you probably won’t notice much struggle. In busy conditions in the city we find it a little difficult to keep up with hustling traffic in the Sport+, whereas in the S with the manual you tend to resist changing up gears and instead keep the engine singing to maintain torque.

The trouble with this is the engine doesn’t feel or sound comfortable in the higher half of the rev range. It sounds harsh, loud and breathless. What’s also troubling, particularly with the auto, is a flat spot when speeding up from a rolling slow down. It causes you to put your foot down more, which results in an erratic down-shift and lots of revving. The first gear is quite low, meaning it’s quick on take-off for the first few metres, then it struggles a bit. 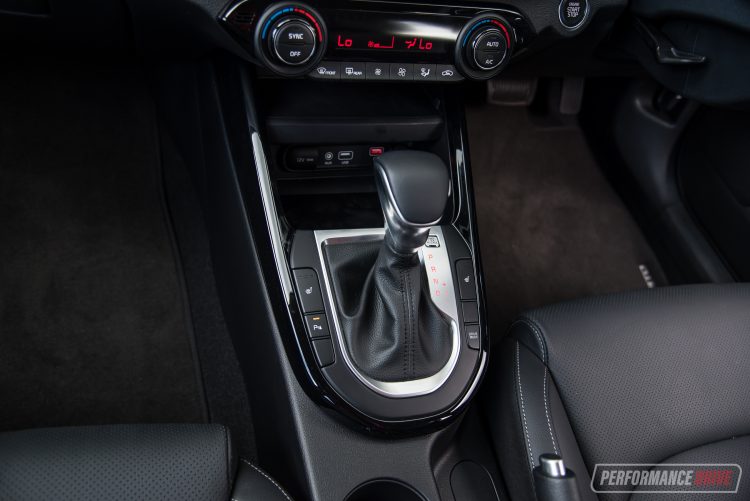 All that engine revving means fuel consumption is pushed up higher than average for this segment. It officially burns at a rate of 7.4L/100km on the combined cycle for the auto, and 7.6L/100km for the manual. Keeping in mind we’re referring to the Sport+ auto and base-spec S manual, we averaged 7.7L/100km in the auto and manual. On the plus side the engine can run on cheaper E10 ethanol blended petrol and a minimum of 91 RON.

Like with all Kias and Hyundais in Australia, all Ceratos have a locally tested and engineered suspension setup. This results in an impeccable ride, and good handling for a mass-produced small hatch. The balance between softness for comfort and tightness for cornering is perfect. It also absorbs pot holes beautifully, with minimal shake-up to the car’s direction. 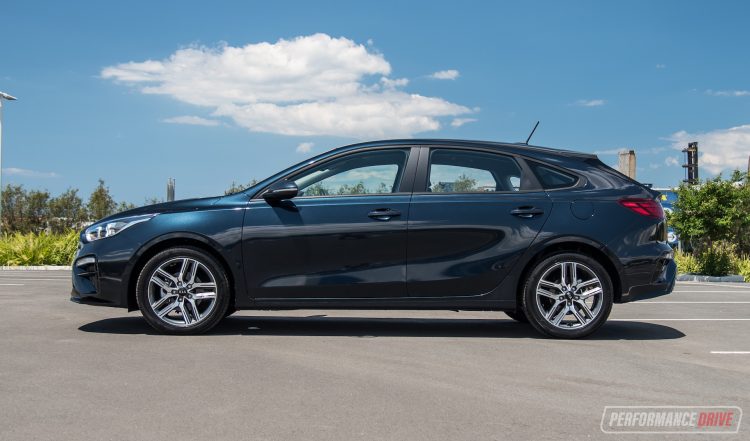 There’s a fair amount of grip, especially from the Sport+. It features 225/45 Kumho Ecsta tyres mounted on 17-inch alloy wheels, while the S gets inferior 205/55 Nexen tyres mounted on 16-inch steel wheels. But in either case, the handling is well up to the class standards. You need to really push it before it starts to give a little squeal from the tyres. The steering feels well-weighted around carparks but gets a little flimsy or over-sensitive at highway speeds.

Both of these models miss out on the superior multi-link independent rear suspension layout that’s adopted on the Cerato GT (and some i30 models), but given these aren’t strictly targeted at sportiness, this is easily excused. 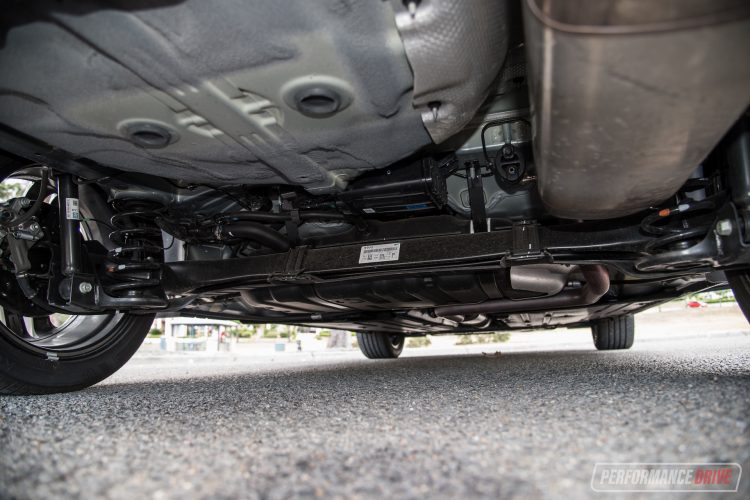 If you want a decent feature and safety list but don’t care for the turbo engine in the GT, the Sport+ is a solid option. It looks good, goes okay, and is impressively packaged for its price. Going back to basics with the S could also be a great option for you if you simply want a large small car that’s filled to the brim with features, and all from a great starting price.

In terms of hatch or sedan, we think the hatch is definitely the more practical option as you can fold down the rear seats to open up an almost wagon-like boot area. We also think the hatch showcases a nicer exterior design, with its subtle spoiler integrated into the tailgate and sporty diffuser-style piece down below.

Of course, Kia has the best warranty in Aus, with seven years and unlimited kilometres. That puts a large tick next to any Kia for us. Scheduled servicing intervals are required every 15,000km or 12 months (whichever comes first).