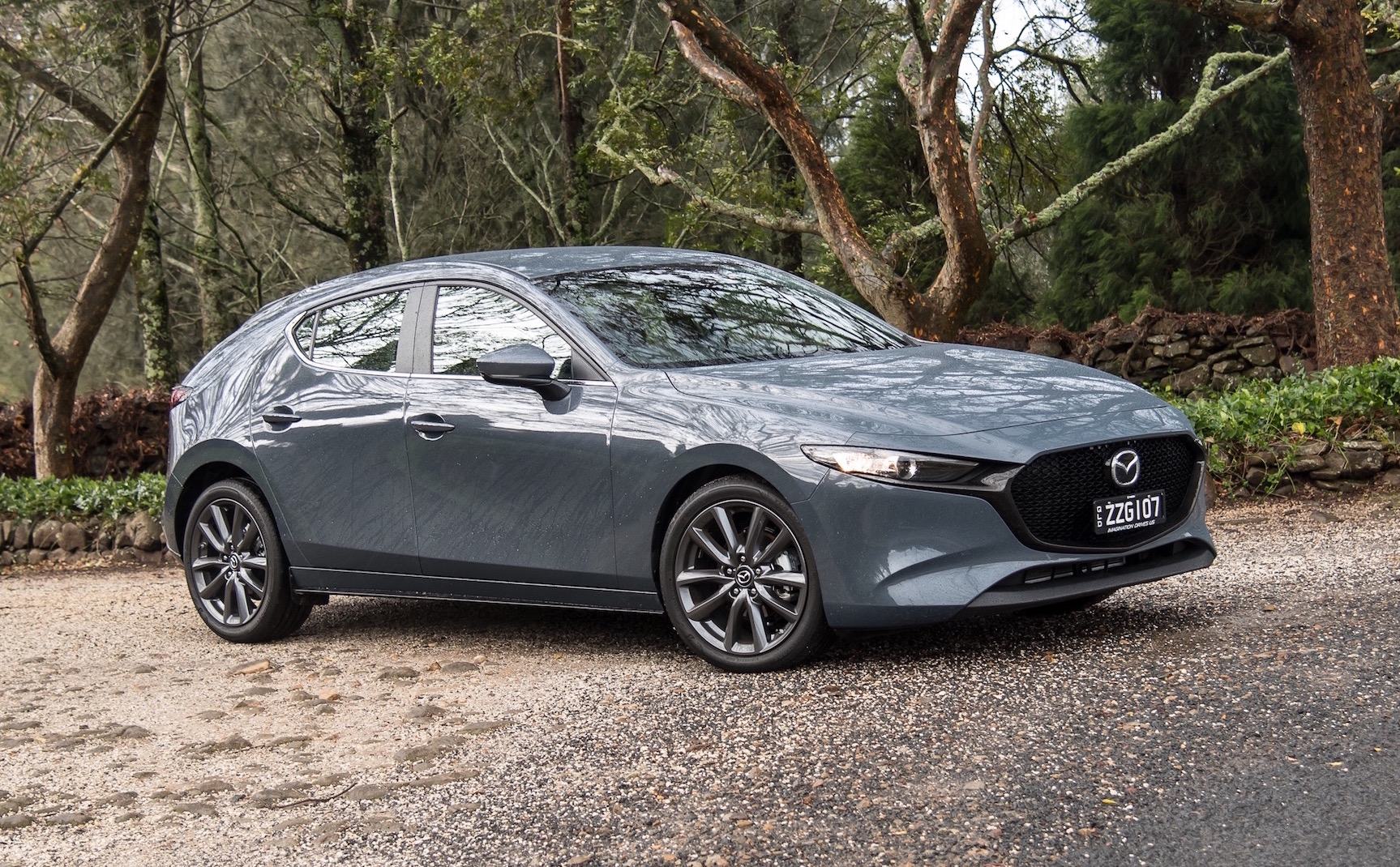 This is a big one. The all-new Mazda3. It basically means the segment goal posts could be moved forward a few feet. Let’s take a look and find out. 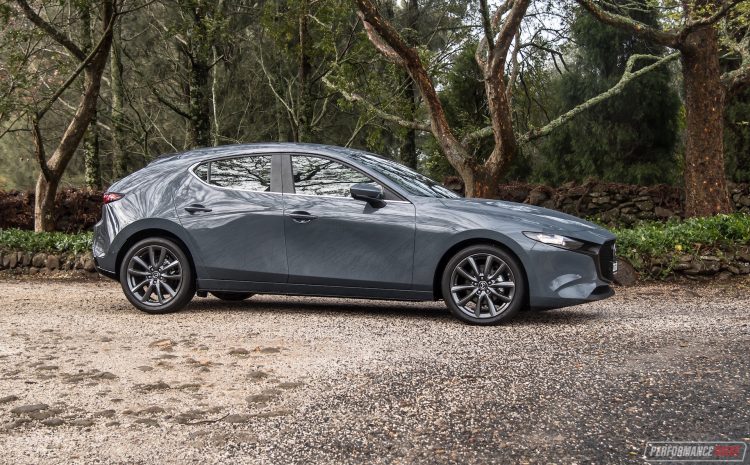 The new model really is all new, underpinned by the company’s latest Skyactiv-Vehicle Architecture. There’s a fresh and rather suave design inside and out, and a heap of advanced technologies and features brought in. In fact, the standard equipment list is one of the main attractions of the new model.

In Australia the range is split up into three main trim levels, in hatch and sedan format and with either a 2.0L petrol (now called G20), or 2.5L petrol (G25). A clever new Skyactiv-X compression ignition engine will join the range later this year. These are then dissected into the Pure, Evolve and Touring for the G20 lineup, and Evolve, GT and Astina for the G25.

Prices start from $24,990 for the base G20 Pure in hatch or sedan form. It is difficult to compare to an equivalent previous model as the level of standard kit is boosted significantly. But, as a guide, the old entry model started from $22,490. Similar price increases can been seen throughout the range.

For example, here we’re testing the G20 Evolve auto hatch, which is priced from $27,690. This compares with the old Maxx Sport 2.0L auto hatch which started from $24,490. (All excluding on-road costs.) 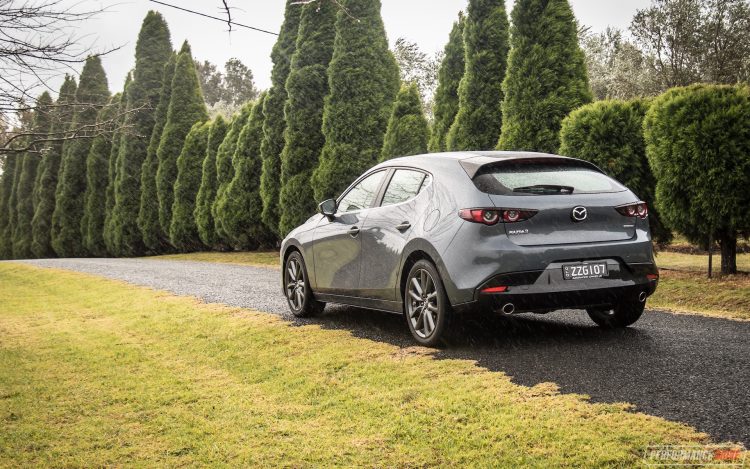 Open the front door and you’d be forgiven for thinking you’ve accidentally approached the wrong car. This is surely a premium vehicle by a premium brand? No, this is actually the new Mazda3. It’s not just the materials and fit and finish that really steps above most of the rivals. It’s the design that really makes its mark in our opinion. Designers have created a suave, peaceful, and subtly sporty atmosphere for the new model. Nestle into the driver’s seat and get comfortable, because this is a place you’ll want to spend plenty of time in.

The driving position is perfect, and it is easy to find thanks to a fully adjustable steering column that offers 10mm of additional adjustment range over the predecessor. The position is low and sunken, like a sports car, with a high dash and mildly high centre console making you feel all wrapped up. All of the controls, and we mean all of them, are ideally positioned for their given function, making it immediately intuitive. In that sense, it is easy to build a rapport with this cabin. And that really helps during a busy daily commute as it feels like you’re right at home in here, potentially reducing the stresses of the day. 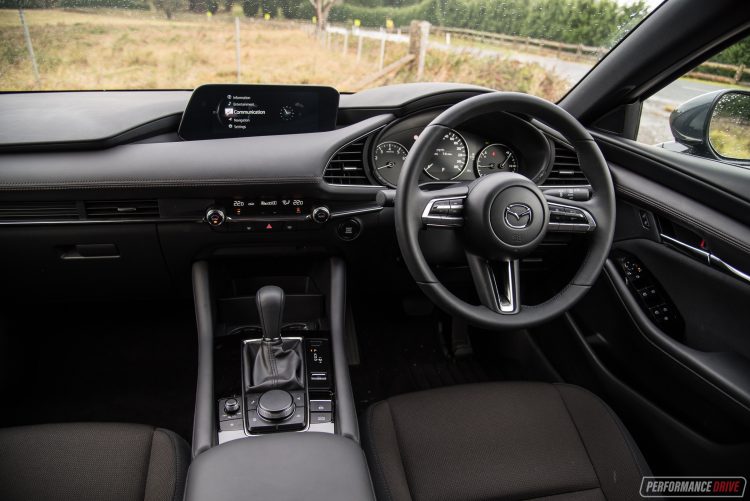 Another element that really pushes forward in this class is the level of standard features and technology. Mazda has updated its MZD Connect media interface system so that it now includes a larger hand controller system on the console, and the screen is now larger than before, at 8.8 inches. Android Auto and Apple CarPlay come as standard, and Mazda’s own apps are comprehensive, with things like digital radio, sat-nav, and a rear-view camera coming as standard. Tunes are pushed through an excellent eight-speaker stereo system, or a 12-speaker Bose system for higher grades.

Safety tech has been boosted significantly over the previous model. Now, all come with blind-spot monitoring, autonomous emergency braking, lane departure warning with lane departure assist, and even radar cruise control for the base model. There’s also road sign recognition as standard, driver attention alert, and tyre pressure monitoring on all models. Some of this information is displayed on a crisp 7.0-inch TFT digital instrument cluster display that offers a range of live information and some configurable menus. 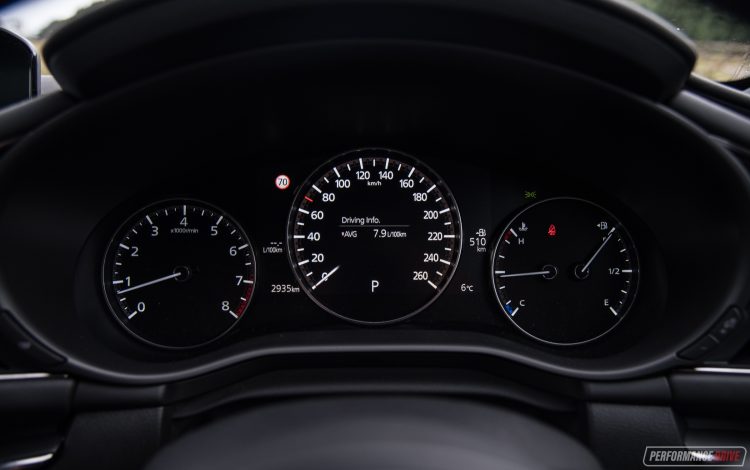 So with all of this, what’s the point of stepping up from the Pure to go for the Evolve? Exactly. Well, it does come with a slightly sportier external appearance thanks to 18-inch alloy wheels (up from 16s). There’s also dual-zone climate control added in, as well as a much nicer leather-wrapped steering wheel over the standard plastic-based version.

What is a bit disappointing about it all is the rear half of the cabin. Due to the sleek exterior design, the rear seat area feels much more confined than before. The window sill ramps right up towards the rear, with an extremely thick C-/D-pillar making it feel quite claustrophobic. While the old model offered above average rear seat space, this new model definitely falls below the average in our opinion. Especially if you take a look at some of the competitors, such as the Kia Cerato, Honda Civic, and Hyundai i30. 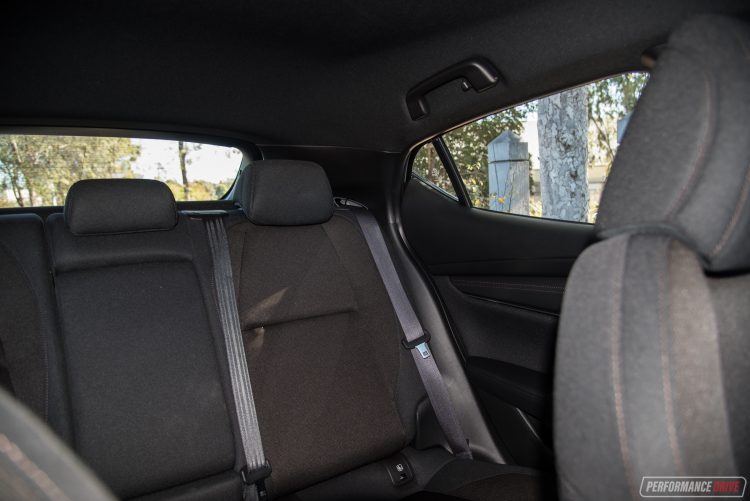 As a result of that thick pillar, the diagonal blind-spot for the driver is appalling, meaning the standard fitment of blind-spot warning isn’t really a luxury but more of a necessity. Rearward vision is also diminished compared with the previous model due to a smaller rear windscreen. And in fact, the boot space shrinks from 308 litres to 295L as well. We’re not sure why Mazda has reduced focus on these areas. We always thought buyers in this market segment were attracted to practicality and packaging? 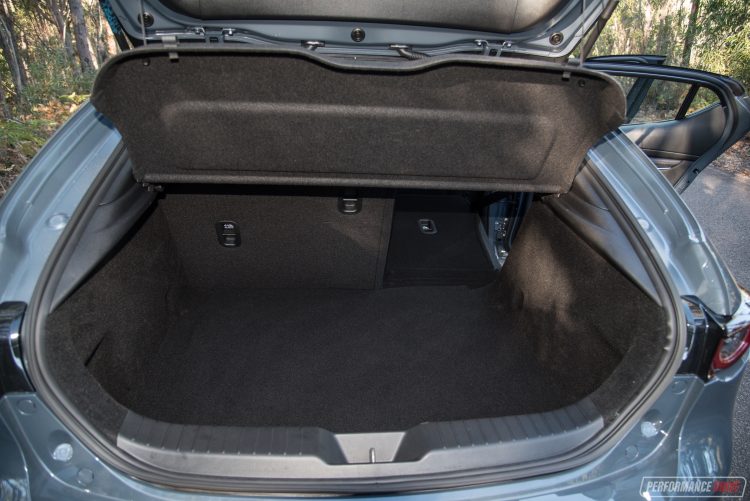 Although there is a huge improvement in standard features and technologies, this has contributed to a weight increase. This example weighs 1310kg (tare) while the previous equivalent model weighed 1270kg. Given that the same engine carries over with the same outputs, it’s obvious the performance will be inferior for the new model.

We know, performance isn’t everything, especially at this end of the market and in this specific segment. However, we think a natural evolution should include some performance benefits for any car. Especially for such a big model change. But unfortunately there doesn’t seem to be any to report here in terms of the engine and the straight line stuff. The carry-over engine also makes an unpleasant noise when revved, which detracts from the otherwise calm and refined nature of the car. 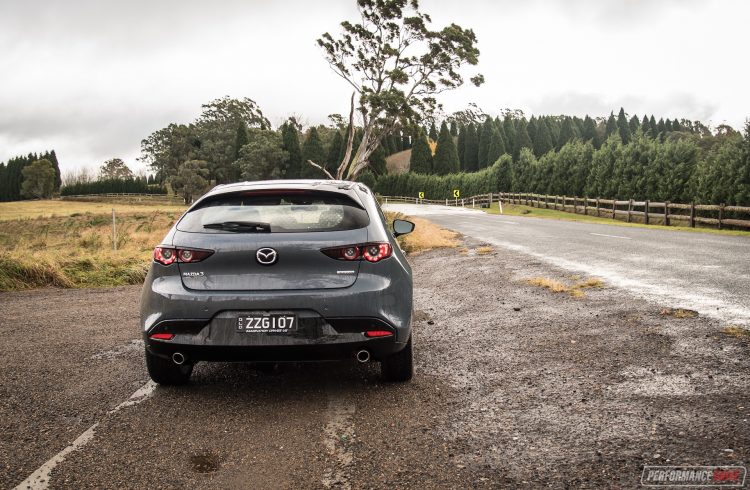 Okay, so you might be thinking instead of performance gains there are fuel efficiency improvements? This is another area that has unfortunately failed to receive attention compared with the previous model. On the official combined cycle test this Evolve offers a rating of 6.2L/100km. That’s up from 5.8L/100km in the equivalent previous model. Our week-long test drive resulted in an average of 7.7L/100km, which included performance testing and highway driving.

You could argue that the swelling of standard features has increased the weight and thus impacted the fuel economy. But that’s not really the customers’ problem. Again, we think some powertrain updates should be a natural part of the evolution, and that should include fuel consumption decreases, not increases.

Fortunately, there are plenty of good things to report about other areas of the driving characteristics. Mazda has yet again devised an outstanding chassis and handling setup for the 3, despite switching from a comprehensive multi-link rear end in the old model to an old-school torsion beam setup here. Ride quality is excellent, with great body control and compliance, even on crappy bitumen and over smashed-out potholes. The wheels always feel firmly planted on the road yet the dampers absorb impacts with minimal cabin disturbance. 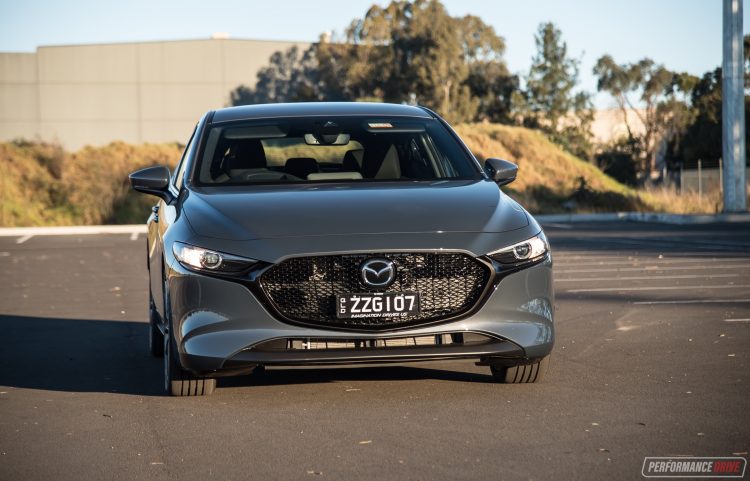 Cornering grip and handling when you really push it is also at the top of the class. You can dive into bends, tuck in the nose, and apply the throttle like a pro and it will respond in sustained cooperation. And best of all, it is fun. It feels like it doesn’t just want to take part in these activities. It actually wants to organise them for you and encourages you to go for a spirited drive. This is a bonus for this segment as it is often filled with practical-focused vehicles that can come across as overly conservative and boring.

Aside from all of the performance-related speak above, the new Mazda3 offers a refined driving experience. It does feel like a premium car in many areas, and even the steering is full of wholesome communication and Euro-like precision.

We must admit, we were expecting this new model to blow the competition out of the water. But when you add up all of the key points, on and off paper, the result just isn’t as impressive as it should be. The smaller boot and smaller cabin feel is very disappointing we think, particularly for this class. Add to this the increased fuel consumption from the same noisy engine as before, as well as a higher kerb weight and higher prices, and poorer performance, and we can’t help but think Mazda has dropped the ball in many critical areas.

Sure, the interior really is a standout for this class – it is far superior in quality, design, and fit and finish than all of the rivals that we can think of. The driving manners are also very refined and there are loads of standard features – but a similar thing could be said about some of the competition.

If interior design and quality, and standard features and safety are your top priorities, the new Mazda3 is worth a closer look. If excellent fuel economy, sheer practicality, interior and/or boot space, powertrain quietness and smoothness, or performance are more important to you, you will find a more suitable option elsewhere in this segment.

Alternatively, you can wait for the new Skyactiv-X engine option which is expected to be a real game-changer, arriving later this year. Or, there’s always the G25 option that should fulfil any performance thirsts that you might have.