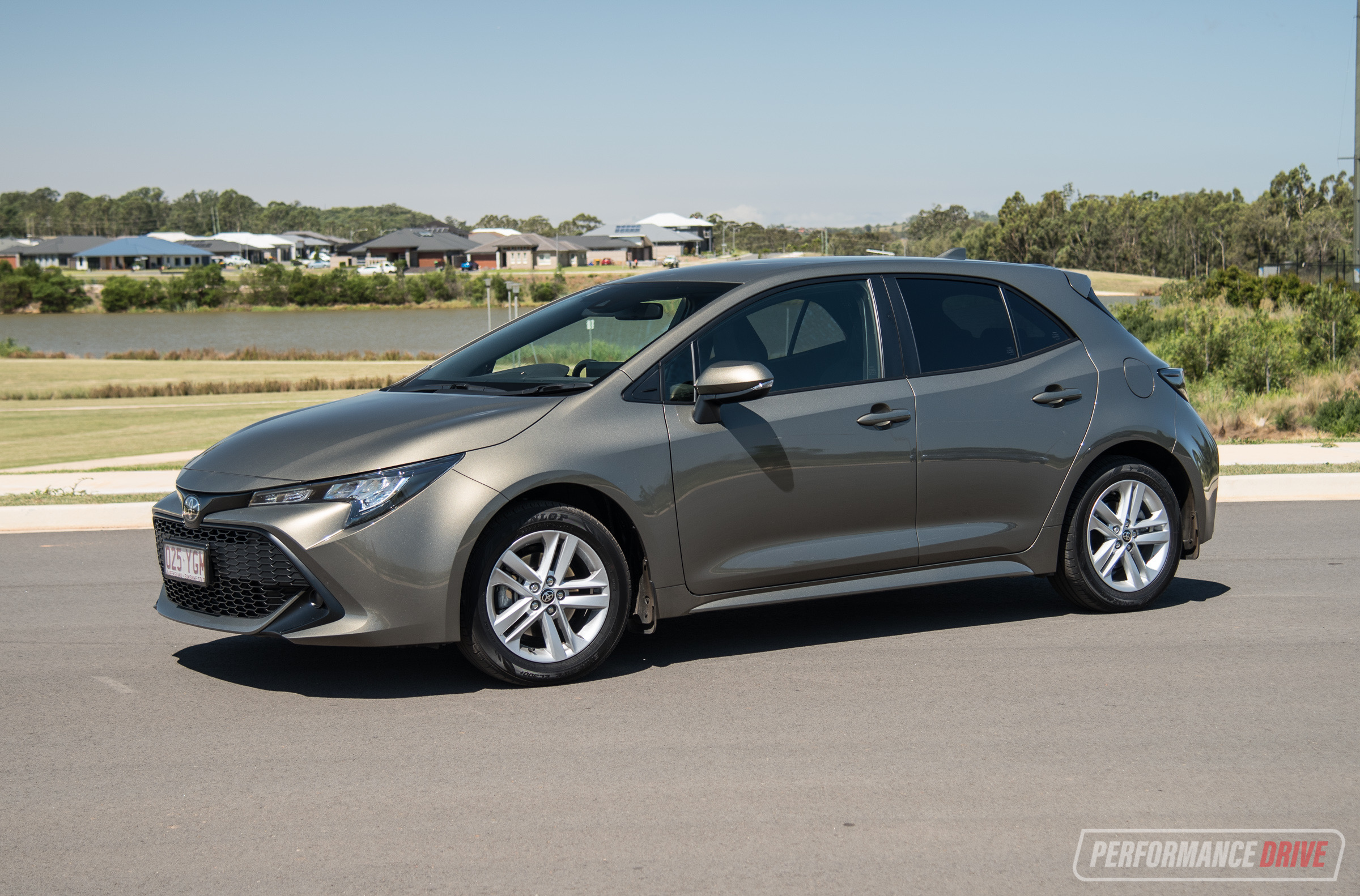 In what could be considered the biggest game changer in years, the latest, twelfth-generation Toyota Corolla is rustling the automotive industry’s feathers. As explained in our full review of the Corolla ZR hybrid here, the new model shakes off that conservative reputation by completely redesigning the nameplate from top to bottom, while jamming in one of the longest lists of standard safety tech in its class. 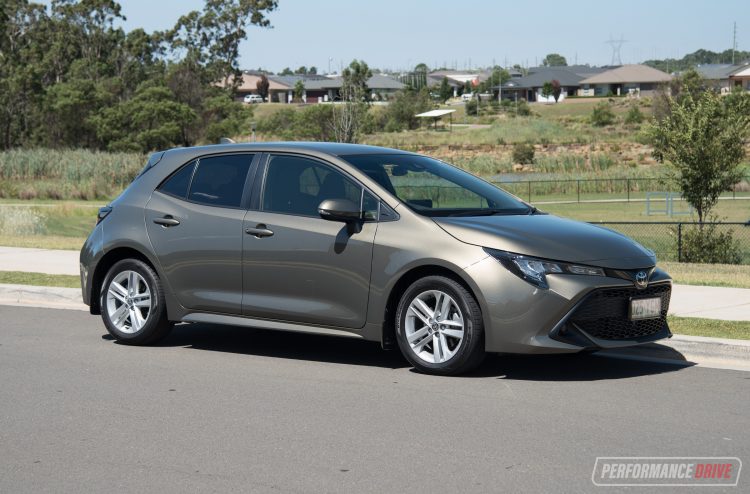 For the new Corolla hatch in Australia, the base Ascent has been eliminated. You can select from the Ascent Sport, the SX and the ZR, all with a new 2.0-litre ‘Dynamic Force’ petrol engine, or a 1.8-litre hybrid petrol/electric option.

Because the base model has now been abolished, the entry price has increased by $2680, to $22,870 (plus on-road costs). But it’s well worth it, as it is now packaged as standard with vital safety features not yet seen standard in some luxury cars.

Here, we’re testing the base Ascent Sport paired with the 2.0-litre four-cylinder petrol engine, mainly due to demand from our viewers on YouTube who wanted to see the new petrol do the 0-100km/h sprint. And for good reason. The new unit produces an impressive 125kW and 200Nm, making it one of the most powerful base engines in the class.

The auto version retails from $24,370 (plus on-road costs). Since we’ve already reviewed the new Corolla in detail, we’ll try and hone in on the new petrol engine in this review while also outlining the highlights of the Ascent Sport. 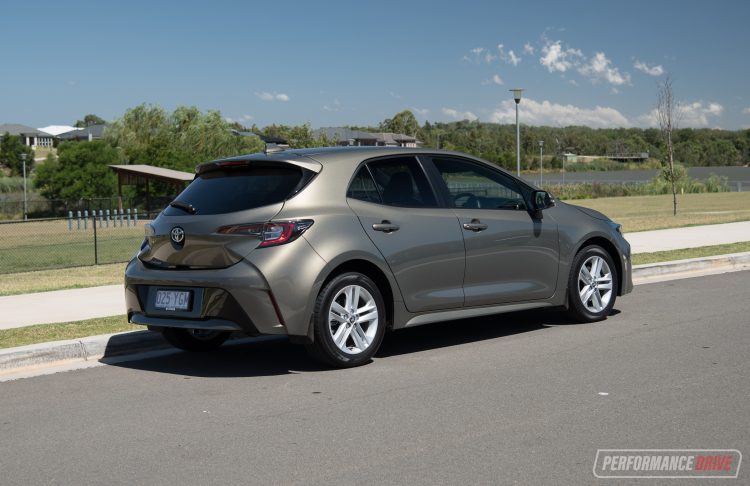 Toyota has really taken the lead on standard tech with the latest Corolla. This base model is equipped with autonomous emergency braking, lane departure alert with steering assist, active cruise control in auto models, pre-collision pedestrian detection, speed-limit road sign recognition, auto high beam, a reversing camera, hill-start assist, and it comes with seven airbags with a five-star ANCAP rating. This is really impressive for a base model.

Inside you also get the lineup-wide 8.0-inch touch-screen media interface which is packed with Toyota Link and Siri voice recognition. Buyers can option for sat-nav which includes digital radio for an extra $1000 (as tested). 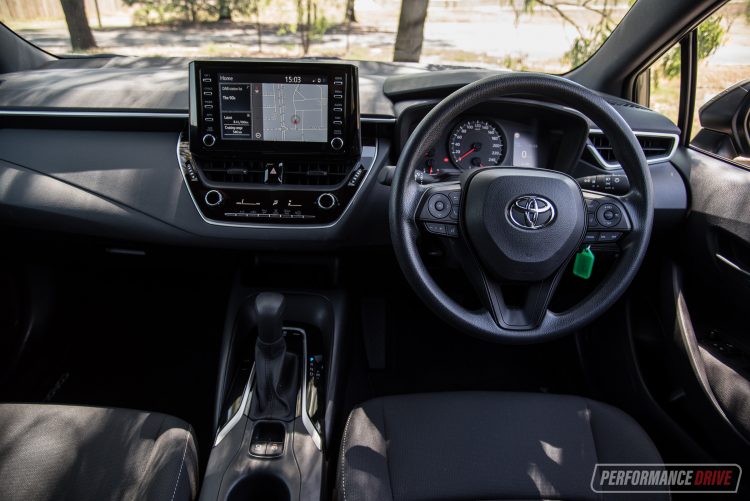 The seats in the Ascent Sport are lightly bolstered and on the softer side. But they do look great and match the somewhat exciting interior design. There isn’t as much glossy panelling or soft-touch plastics as on the ZR model, but it still presents as a modern and appealing environment to be in, and everything feels long-lasting.

In the rear, room is not class-leading but there’s enough space for four adults on short trips. It won’t be an issue for most passengers, but if it is important, the old sedan offers much more wriggle room in the back.

The boot measures up at 217 litres, which is far from roomy. By comparison the Mazda3 hatch offers 308 litres, and the Hyundai i30 offers 395L. If you lie the back seats down the space increases to 659 litres. Underneath the boot floor is a full-size alloy spare, which does provide some justification. 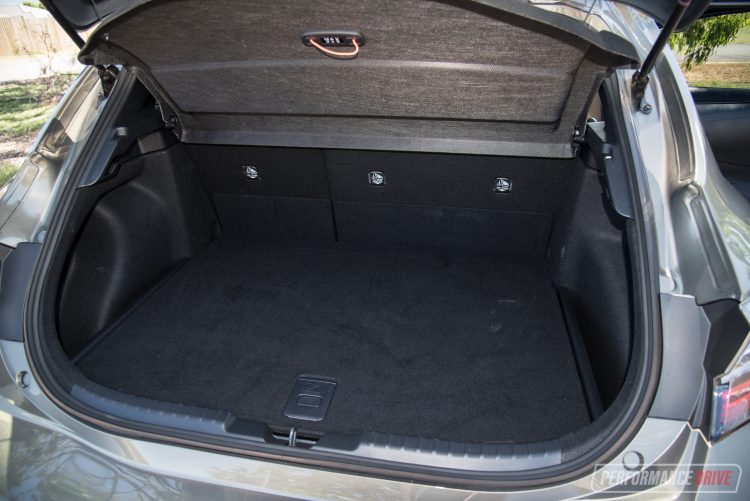 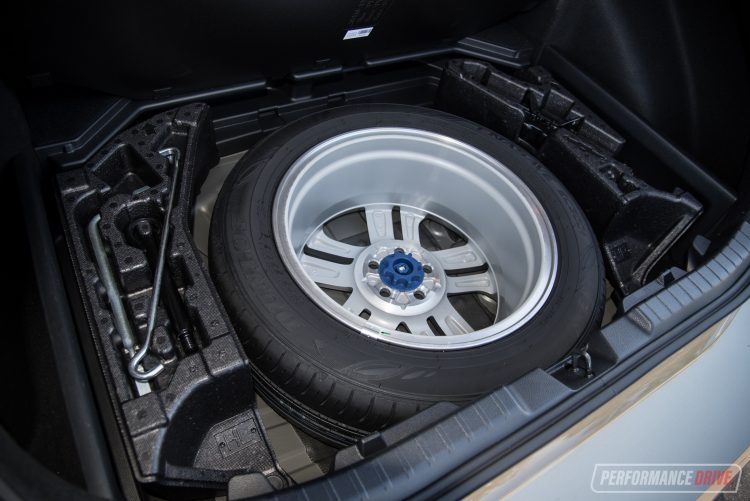 It would be great if Toyota offered a sportier engine for its so-called sporty variants. The only redemption here is that this latest-gen comes with a higher-powered standard petrol engine across the range. It is also produced from only 91 RON petrol, which is great for this market.

The petrol Corolla rolls up speed quickly and without the need to use a heavy foot, while the CVT auto seems nicely-tuned for the engine to support this easy-cruising ability. However, when you have a full car and tackling a hill, the engine does need to scream to get the job done. Fortunately, it’s a free-revving engine with surprisingly strong top-end pull. 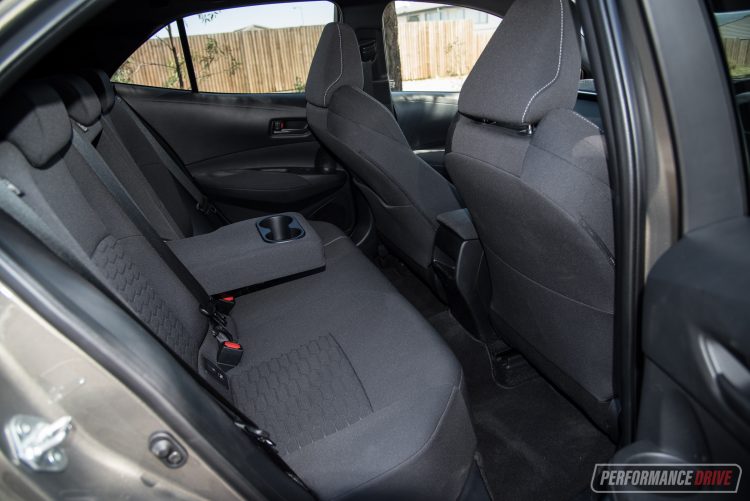 We timed the 0-100km/h sprint in 9.02 seconds. It’s far from hot hatch quick but it is much quicker than the hybrid we recently tested, which took a yawning 12.92 seconds. Despite the increased performance, the fuel economy of the petrol is outstanding. Even when driven hard, the average consumption never rose above 6.4L/100km during our testing. And our longer term average was just 6.2L/100km. This is not far away from the official average of 6.0L/100km.

The redesigned CVT auto transmission has been improved over the previous model. It now has a launch gear that acts like a conventional first gear to provide a more reactive take-off. Or you can be a rare breed and opt for a six-speed manual transmission, but it’s only available in the Ascent Sport variant.

Around bends the ‘TNGA’ (Toyota New Global Architecture) platform is a wonderful thing. It steers in nicely and confidently, and gives you a reassuring and solid sense of stability on the highway. Toyota has also vastly improved the ride quality in the new model, so it’s supple over rough roads yet taut and supportive of body movements during cornering. The steering also feels lovely and communicative, considering its intended market. 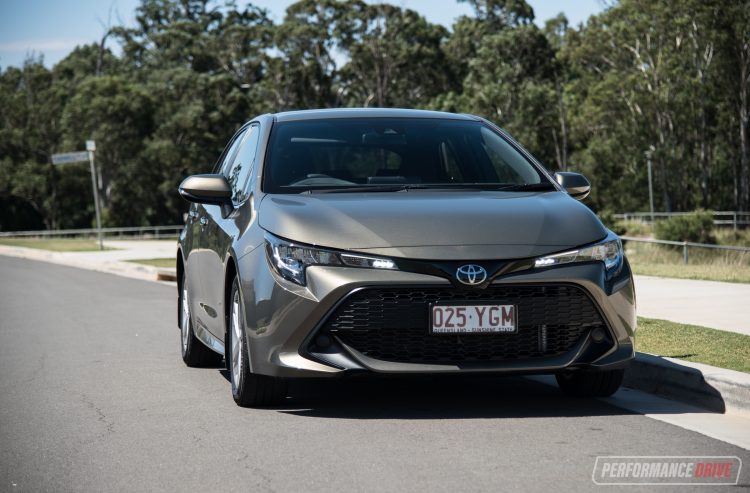 Looking specifically at the new 2.0-litre petrol engine, it shines bright when it comes to economy – even when driven hard. And it has a class-rivalling power figure that provides decent on-road performance. This translates to a hatch that easily keeps up with a demanding city drive, but it doesn’t quite replicate the torque found in many other turbo engines on the market.

We absolutely love that the base model comes with so many vital safety technologies and nifty features. In almost every area, the new Corolla is at the front of or at least equal to the class standards. We would recommend the petrol over the hybrid simply because of the performance. But if that has no bearing on your car-buying criteria, the hybrid is whisper-quiet and very frugal.

CONS:
– Small boot and rear seat space
– Interior design is modern but intrusive to cabin airiness
– Elimination of base Ascent might alienate some buyers