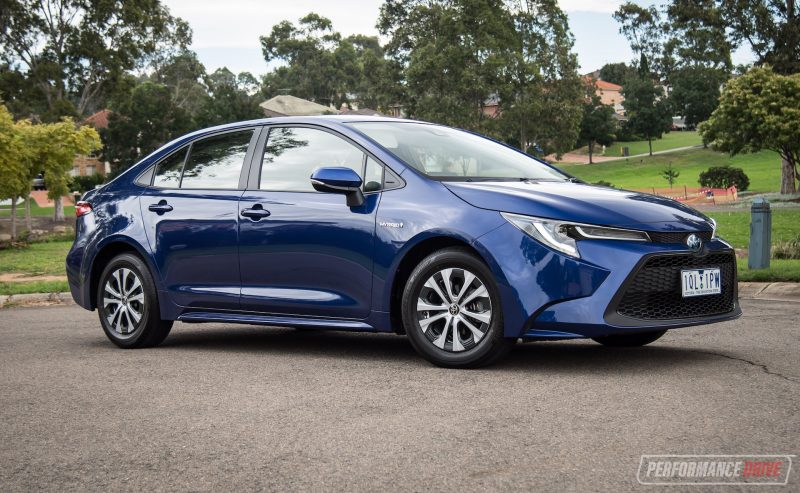 If there is one car that proves to be unstoppable time and time again, it’s the Toyota Corolla. According to May 2020 VFACTS figures, it has nailed the small car market in Australia with an enormous 23.9 per cent market share. Now, with the recent release of the all-new sedan, that number will no doubt rise further. 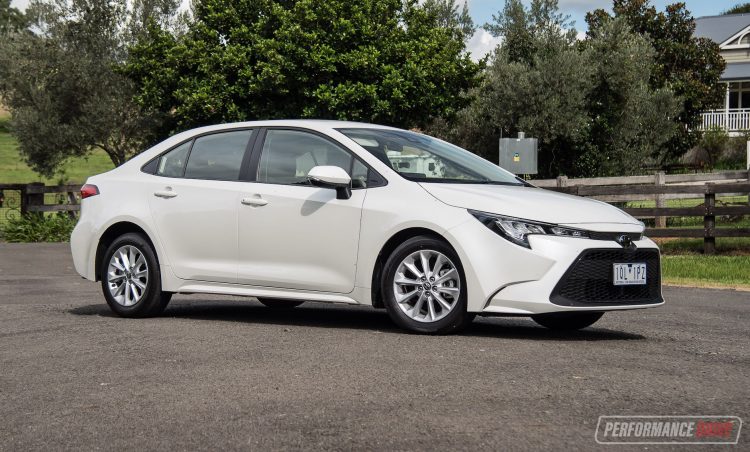 The Corolla sedan and hatch are on completely different life-cycle timelines. Usually, the sedan is about 12 months behind the latest generation hatch. So, it’s about time we had some fresh Uber sedans to look at on the road.

The range starts with the Ascent Sport manual priced from $23,335. Then it moves up to SX from $28,235, and then the ZR at the top from $33,635. With the popularity of hybrid technology, Toyota is kind enough to offer a hybrid engine in every sedan variant except the ZR. It combines a 1.8-litre four-cylinder petrol engine with a pair of electric motor generators that produce a combined 90kW. Otherwise, a humble 2.0-litre petrol engine is offered that produces a peppy 125kW of power and 200Nm of torque.

Here, we’re giving most of the lineup a thorough going-over by testing three models in the range; the petrol Ascent Sport, and the SX in both hybrid and petrol form. 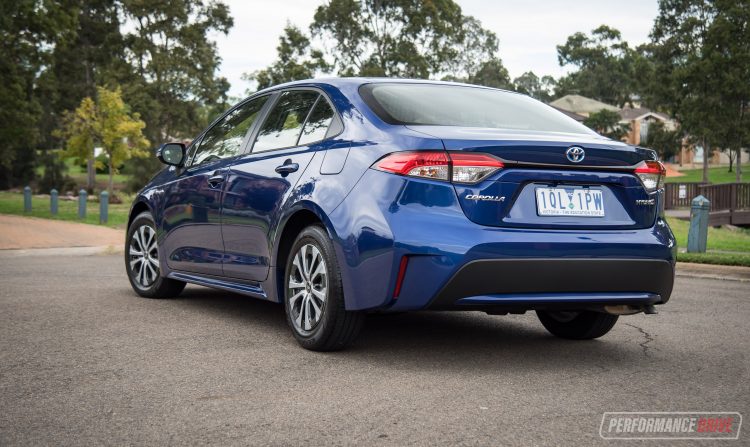 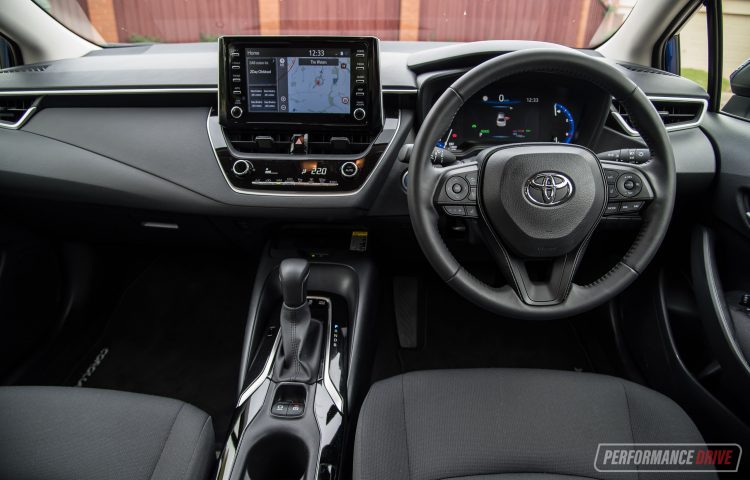 Previously, the Corolla sedan was made in Thailand. Now, the latest-gen model is built alongside the hatch in Toyota’s home country, Japan. Exterior design is a leap forward from what was typically a conservative-looking four-door. The front end now replicates the generally well-received hatch launched in 2019 with its large dark trapezoidal grille and aggressive swept-back headlights.

The rear appears a little more conservative, but not as boring as the previous model in our opinion. New LED taillights and a sharp boot edge give it a neat look, and the lights are bridged together by a countersunk black strip that adds sophistication. A black lower bumper section mirrors the front end’s black lower grille. 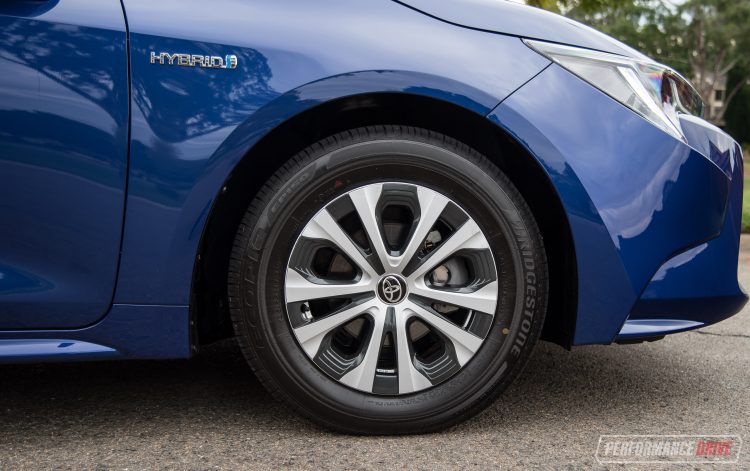 There is not a real stick of difference in the exterior as you slide up the model ranks – different wheels are the biggest item to tell these tested models apart. The SX hybrid uses special 15-inch wheels with 195/65 eco tyres, while the lower-grade Ascent Sport gets 16-inch wheels wearing 205/55 tyres.

Overall length has grown from 4620mm to 4630mm, and width is also increased from 1775mm to 1780mm over the old sedan. This translates to an incredible amount of space on the inside for a small car. Speaking of the interior, let’s hop inside. 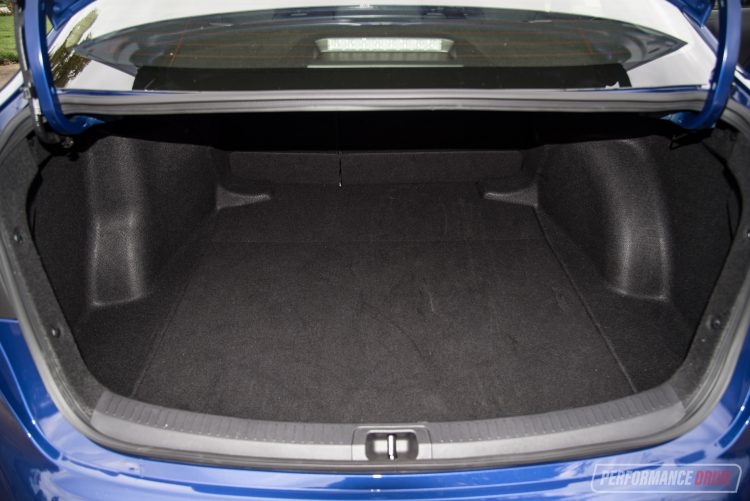 Whether you’re being chauffeured around in the back seat or being the chauffeur, you’ll feel like you’re in a mid-sized sedan. There is plentiful legroom, headroom and width for five adults. And the luggage of as many people will stand the best chance fitting into the Corolla sedan than most other small sedans on the market. Officially, it offers 470 litres of volume. That makes it 26 litres bigger than the Mazda3 sedan, but 32 litres smaller than the Kia Cerato sedan. It’s also a big step up from the 217L offered in the Corolla hatch (333L for ZR hybrid hatch).

Design-wise, the cabin of the Corolla sedan is kept simplistic yet modern. It continues to be one of the quickest and easiest layouts to navigate. Quality materials and strong controls will no doubt help it stand the test of time, but the Ascent Sport lags behind with no leather steering wheel or gear shifter. Positioning of the centre touch-screen is strategically high up on the dash to reduce loss of driver focus on the road. 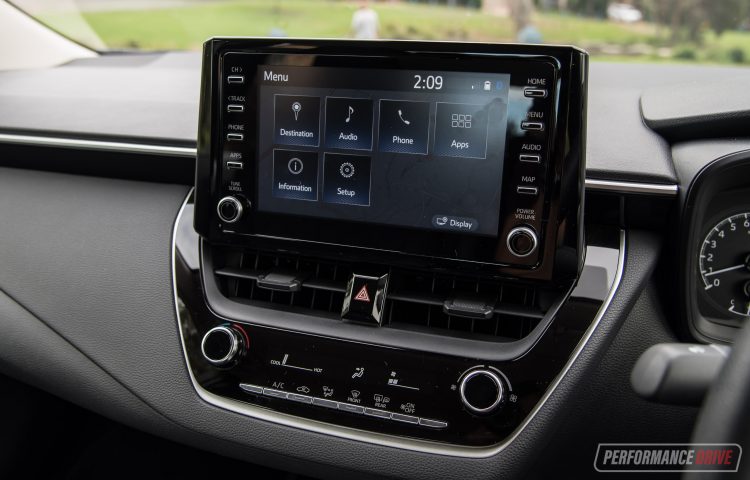 Our only other gripes are the centre cup holders are too small, and the lack of somewhere to grab on the door. There is a handle closer to the hinge of the door, but there needs to be an additional handle that is positioned to control the door opening angle better we feel – especially in tight carparks.

If your budget limits you to the base model Ascent Sport, you’re still treated to many important features. For example, forward collision mitigation and braking with pedestrian avoidance, distance-controlled cruise control, auto dipping high beam, lane departure warning, heated door mirrors, speed limit reminder with road sign detection, keyless smart entry and start on hybrid models, and an 8.0-inch touch-screen with Android Auto and Apple CarPlay are all standard. Toyota has been very generous to include all the above in the base model, especially when you see some expensive European brands making you pay extra for some of these items. 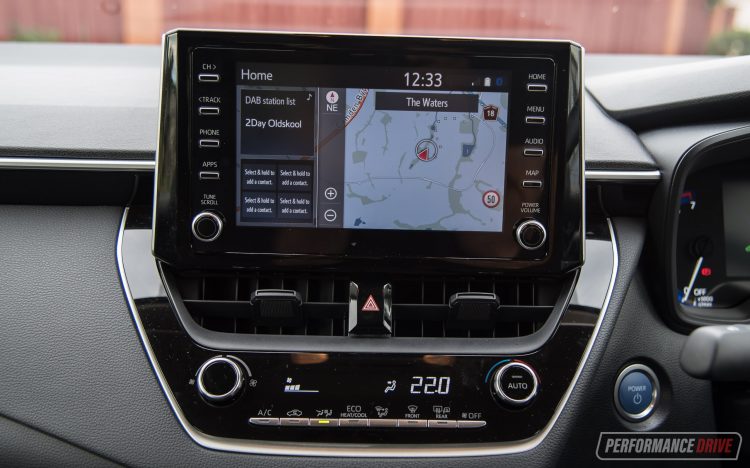 Stepping up to the SX variant upgrades the package with climate control, blind-spot sensors, gear shift paddles, sat-nav and digital radio, a leather steering wheel and gear selector, and a handy wireless phone charger. But keep in mind these equipment upgrades on the auto-only petrol SX do translate to a $3400 premium over the auto Ascent Sport sedan. In that sense, the Ascent Sport seems to offer the best value for money.

Good on you Toyota for bringing your warranty up to speed with the rest. All Corollas come with a five-year, unlimited kilometre warranty. Servicing is also now required less often, at 15,000km or 12 months. And the first five services are capped at just $175 each.

The petrol engine sees vast improvements over the old engine. It is now bigger, at 2.0 litres, and it produces 20 per cent more power than the previous-gen 1.8-litre. 125kW and 200Nm in an entry-level model finally takes the Corolla from being a boring and lethargic performer to something that offers class-leading power.

On the road, it zips up to speed effortlessly. We clocked a best 0-100km/h in a respectable 9.32 seconds. The engine is very thrashy and shrill higher in the rev range, but with these output gains you’ll find it doesn’t need to be revved as much to get things going in normal conditions. 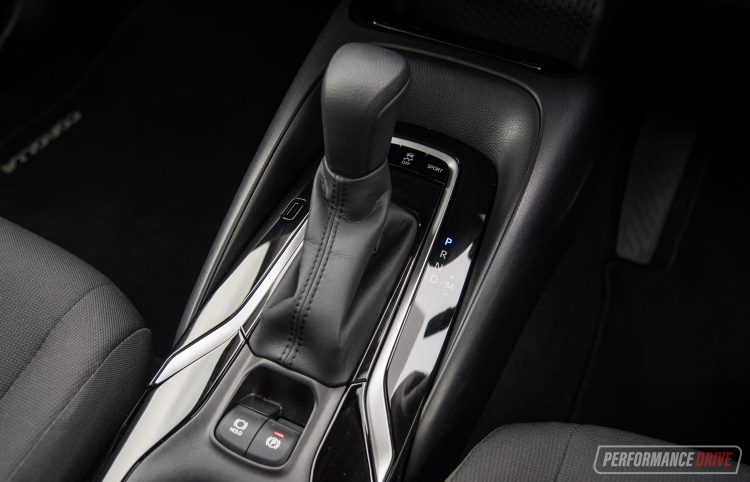 Unfortunately, the CVT auto makes the engine sound droney and dull – and there’s no getting away from it, with manual only available on the base Ascent Sport. The benefit of the CVT auto is that it vastly contributes to great fuel economy. Officially it averages 6.0L/100km. In real life, the figures can be just as impressive. Our harsher testing revealed 6.2L/100km. That is a great score. But Toyota can go even better than this with the hybrid.

No matter which variant you plan on buying, the hybrid system is around $1500 more expensive. That’s a gigantic step closer to making hybrid technology accessible to all. But, are the benefits there? Well, in terms of fuel savings, certainly. Officially the hybrid averages a meagre 3.5L/100km. Our harsher testing saw an average not far off, at 4.2L/100km. Compared to the already efficient all-petrol engine, that’s a 2.5L/100km saving. Fantastic work, Toyota. 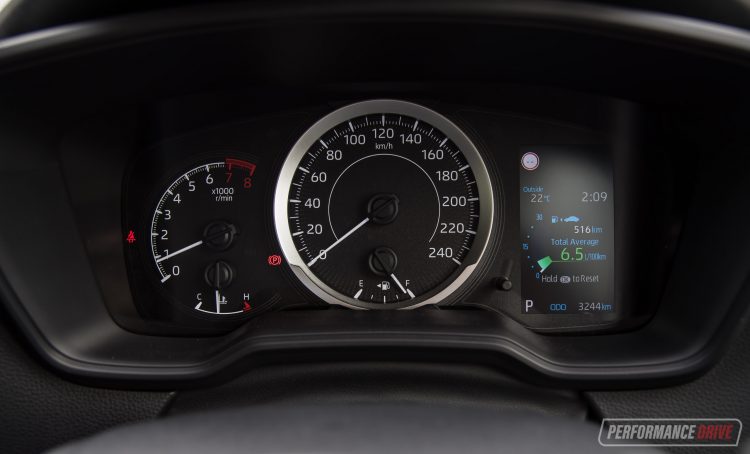 If power is important to you, the hybrid will seem very slow. We clocked a best 0-100km/h in 12.44 seconds. Though, even we think those fuel consumption figures are worth the power cut. It’s not terribly slow to drive around the city, it just doesn’t go well alongside an eager traffic rush or when needing to overtake at highway speeds. Surprisingly, the fuel readings are better in city stop/start traffic than in higher speed conditions. If you live in the city, you will benefit from even better fuel consumption.

Whether you reside in the city or country, all Corolla sedan models deliver a refined ride on all road types thanks to Toyota’s New Global Architecture. At the front, new MacPherson struts complement an all-new multi-link system at the rear. Stability and handling are near the top of the class in our opinion, while ride comfort is pretty much perfect for this style of car. 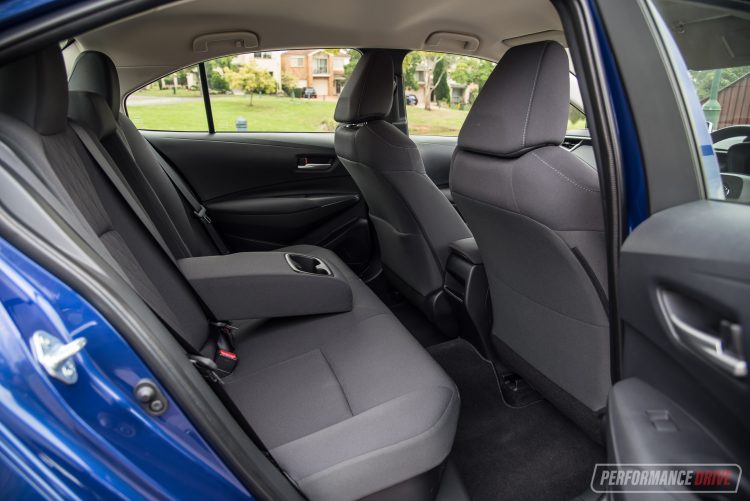 Improvements can also be felt in the steering. The previous generation suffered from a stiff and characterless steering feel, with little feedback delivered to the driver. Although not quite class-leading, this new model feels more engaged and connected to the road than before.

Speaking of connected (or lack of), the distance-controlled cruise control is not a very intuitive system. Toyota (and Lexus, actually) really needs to update it. It’s inconsistent with traffic flow, and doesn’t shift between lanes as smoothly as nearly all other brands out there. There is some hesitation, confusion and some annoying beeping during use as well. It also struggles to hold a set speed, sometimes fluctuating by up to 20km/h. And down hill, it has no qualms in making the engine rev right up to 5000rpm without any meaningful engine braking, yet there is no automatic brake pressure. That’s just silly and noisy.

It’s great to be surrounded by so many features in the ever-common Corolla. The only trouble is Toyota could be doing itself a disservice. Because the base model Ascent Sport is so well-equipped, buyers could be less coerced into buying higher spec models. Well, at least until the rumoured GR Corolla hot hatch is released.

It was a car that used to lead the way solely through means of proven reliability, but in a vanilla fashion. Now, it leads the pack in three more ways: it has standardised important features that some luxury brands still charge extra for, it now has one of the most powerful entry level engines in its class, and Toyota’s answer to fuel efficiency with affordable hybrid engines is ultra-strong in the latest Corolla.

If your need for power is not as strong as ours, spend the extra $1500 for the hybrid. At 3.5L/100km (and real-world figures not far off), it wouldn’t take long to pay that margin off.