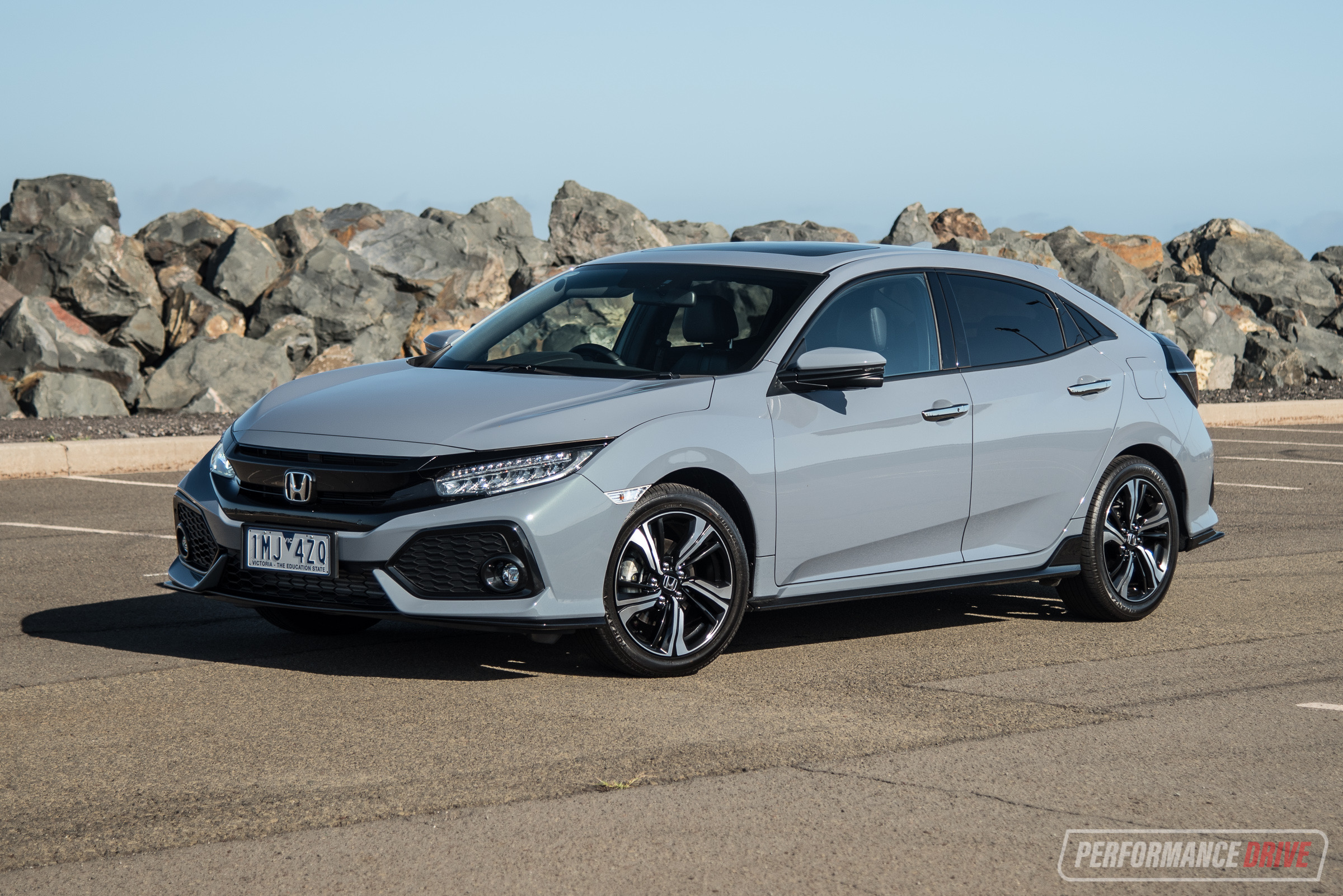 When it first launched a couple of years ago, the Honda Civic RS blew the market away with its hugely practical cabin, clever features, and brisk new 1.5-litre turbo engine. So we thought we’d sample the hatch version now to double check that it’s still one of our favourites. 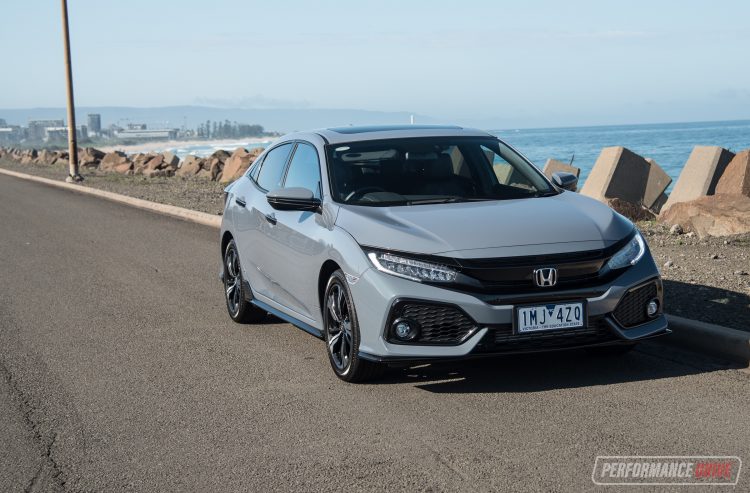 The Civic lineup remains expansive, comprising of six variants; the VTi, VTi-S, VTi-L, VTi-LX, RS, and the hardcore hot hatch, the Type R. All models are fitted with a constantly variable auto transmission (CVT), except for the Type R.

Here we’re testing out the RS in hatch format, which has a price tag of $32,290 (excluding on-road costs). You can also read our initial review of the RS in sedan form here. 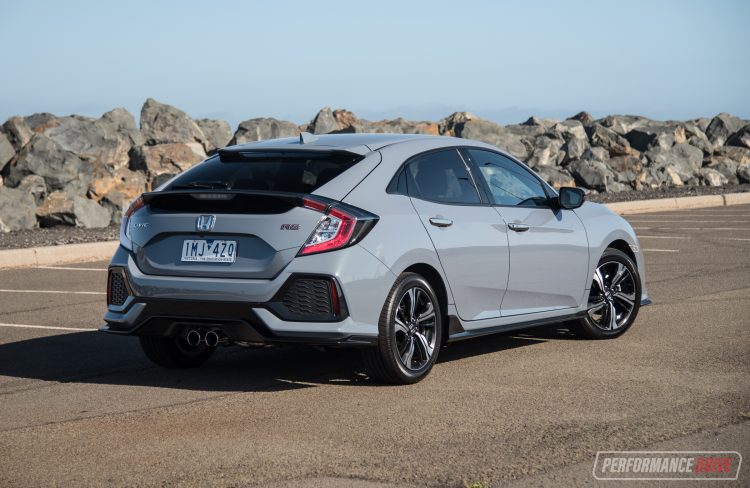 Being the second from the top, the Civic RS is not as feature packed as you might think. In today’s market anyway. It’s a shame it misses out on the crucial forward collision autonomous emergency braking and radar-guided cruise control. But you do get front and rear parking sensors, partial leather trim with heated front seats, proximity key with push-button start, auto wipers and headlights, daytime running lights, and tyre pressure monitoring. You also get Honda’s truly innovative ‘LaneWatch’ system, which gives you views of the left blind-spot whenever the left indicator is activated.

Up on the dash is a 7.0-inch touch-screen media interface filled with sat-nav, digital radio, and Android Auto and Apple CarPlay. There’s also HDMI input, and an awesome 12-speaker sound system with sub-woofer. This latter feature is a particular standout for us. We found the touch-screen somewhat painful to operate, as different USB sticks would crash the system to the point that the reversing camera wouldn’t even display. This happened multiple times. 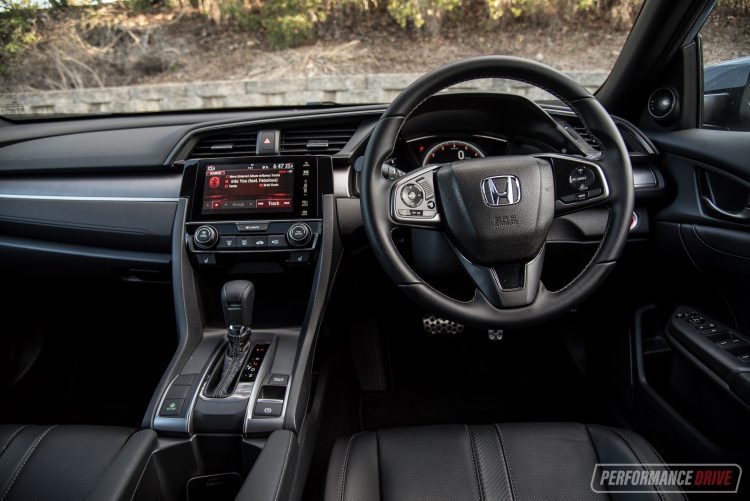 The Civic continues to sport an eccentric design, but we think it does seem to be blending in well with the modern market compared with when it first hit the scene. Going for the RS means you get a racy bodykit with a more aggressive front end, lots of black trimmings including for the front grille and window surrounds, and a sculpted rear bumper bar complete with twin centrally-mounted exhausts.

Front passengers enjoy some big and lightly bolstered sports seats with electric adjustment for the driver. The driving position is excellent, with a highly adjustable steering column allowing you to hunker right down low or go for a raised, see-all position. 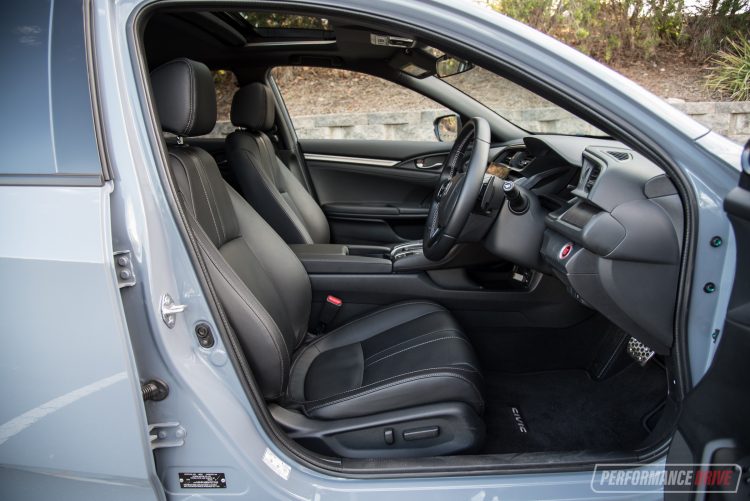 Rear seat space is very accommodating. One of the most accommodating spaces in the segment, in our opinion. With bottle holders in the doors and cup holders in the flip-down centre armrest, two adults will be comfortable back here for a while. The centre console in the front also offers cup holders with secret cubby holes underneath, and more than enough little storage pockets and shelves around the place. 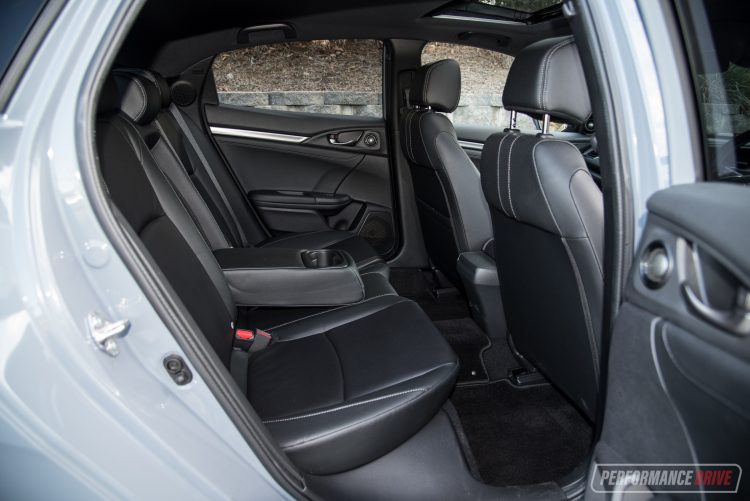 If boot space is important to you, you might consider the Civic sedan. It fits 410 litres with rear seats upright. The RS hatch offers 330L of space due to the dual-muffler exhaust heightening the boot floor. But the hatch boot is still bigger than the current Mazda3’s 308L, and smaller than the Hyundai i30’s 395L. It’s not that it’s small, as it stretches fairly deep. The relatively high boot floor is what saps outright volume, on paper.

Servicing is required every 10,000km or 12 months, which is more frequent than some rivals. All Hondas now come with a generous five-year/unlimited kilometre warranty in order to keep up with local market standards. 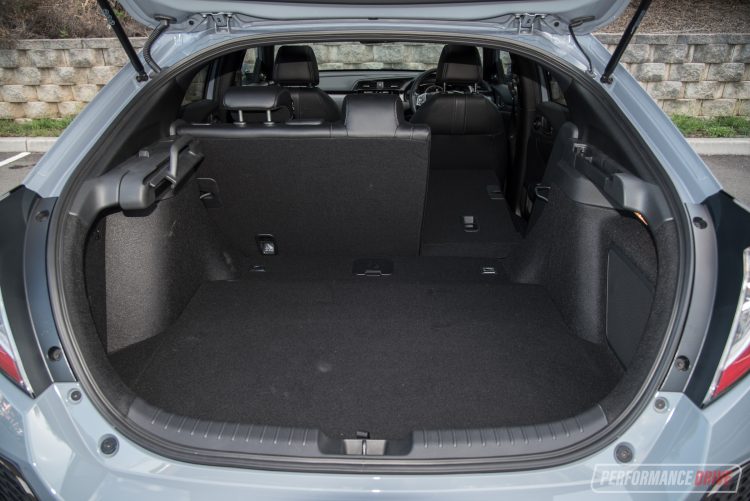 One of the greatest moves Honda has made recently is switching to turbocharging. The latest 1.5 turbo engine is available in the VTi-L, VTi-LX and the RS. It produces 127kW and 220Nm. It’s doesn’t transform the Civic into an absolute powerhouse, and nor does it make the Civic the most powerful in the class.

For the RS, which usually stands for ‘rally sport’, the outputs are perhaps less aligned. On paper, anyway. It is a shame we miss out on the ‘Civic Si’ offered in the US, which features a 153kW version of the same ‘L15B7’ 1.5 turbo engine, running 20.3psi (local tune runs 16.5psi). Over there it’s also offered with a six-speed manual. Nonetheless, we clocked 0-100km/h in this hatch in a very respectable 7.xx seconds.

We think the torque figure is a bit misconceiving, as 220Nm doesn’t seem like much on paper. And actually it’s not much. But thanks to the RS’s fairly low 1337kg tare weight, and the adaptable CVT auto transmission, there really isn’t much hesitation in most circumstances. Even uphill overtaking is fine, unless you’re carrying a full car load or something. 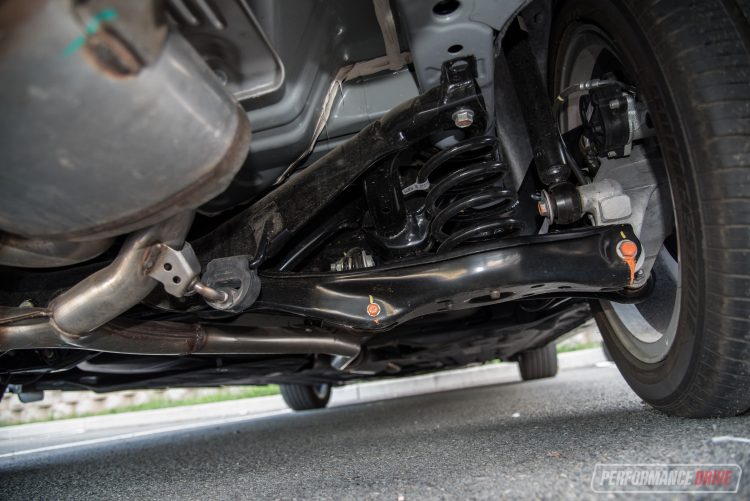 It’s around bends where the Civic RS impresses the most. This is a wonderfully well-sorted vehicle. The MacPherson strut front end and multi-link rear is not too dissimilar to what most premium European vehicles use. Both the front and rear offer plenty of compression range too, so it’ll absorb big bumps mid-corner without upsetting the balance or compliance.

And then there’s the steering. Although assisted by electricity, it’s perfectly weighted and highly communicative. Steering rotations from lock to lock vary thanks to the variable ratio gearing, helping to provide responsive turn-in yet without being too sensitive as to ruin stability. If you want the best-handling practical hatch in the non hot hatch market, this is one that deserves checking out first. 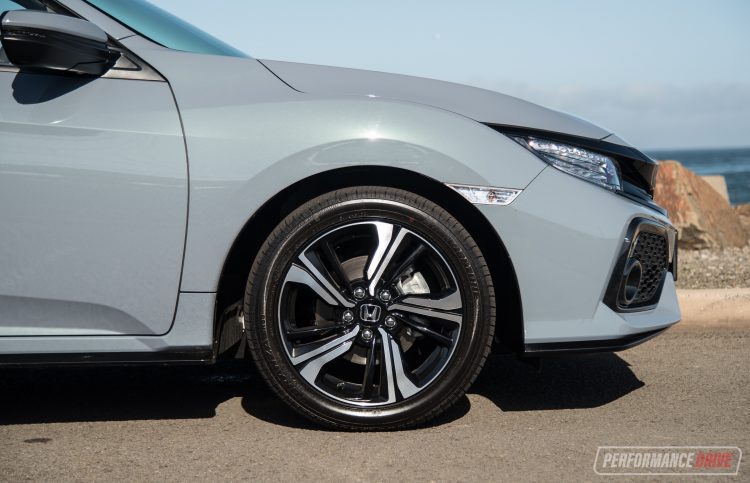 One of the main reasons Honda switched to turbocharging is to reduce consumption and emissions. Need proof? The base model Civic with the 1.8L non-turbo four-cylinder, producing just 104kW and 174Nm, offers an official average consumption of 6.4L/100km. This 1.5L turbo is stamped at 6.1L/100km.

And in the real world, the turbocharger helps maintain highway cruising more effortlessly, which means you’ll likely find it easier to experience good fuel economy. During our test the trip computer said 7.0L/100km, while the 1.8L VTi-S we tested a few years ago chewed 8.0L/100km. Obviously you can’t compare two different tests as we could have been driving in a different style, but even still it’s a decent little indication of what to expect. There’s also an ‘eco’ driving mode which may improve real-world economy.

The RS version isn’t the ‘rally sport’ edition you might have expected, but all of the foundations are there; an extremely well-sorted chassis and handling, decent acceleration, and undeniably engaging styling. You also get some other ‘cool’ attractions such as a kicking stereo, very innovative side-view camera technology, and good interior space for the class filled with multiple connectivity options.

We’ve heard Honda Australia is planning a light facelift for the Civic a little later this year. This means you might be able to get a good deal on this existing model. Alternatively, holding out for the facelift might be worth it, especially if some desirable improvements are brought in.