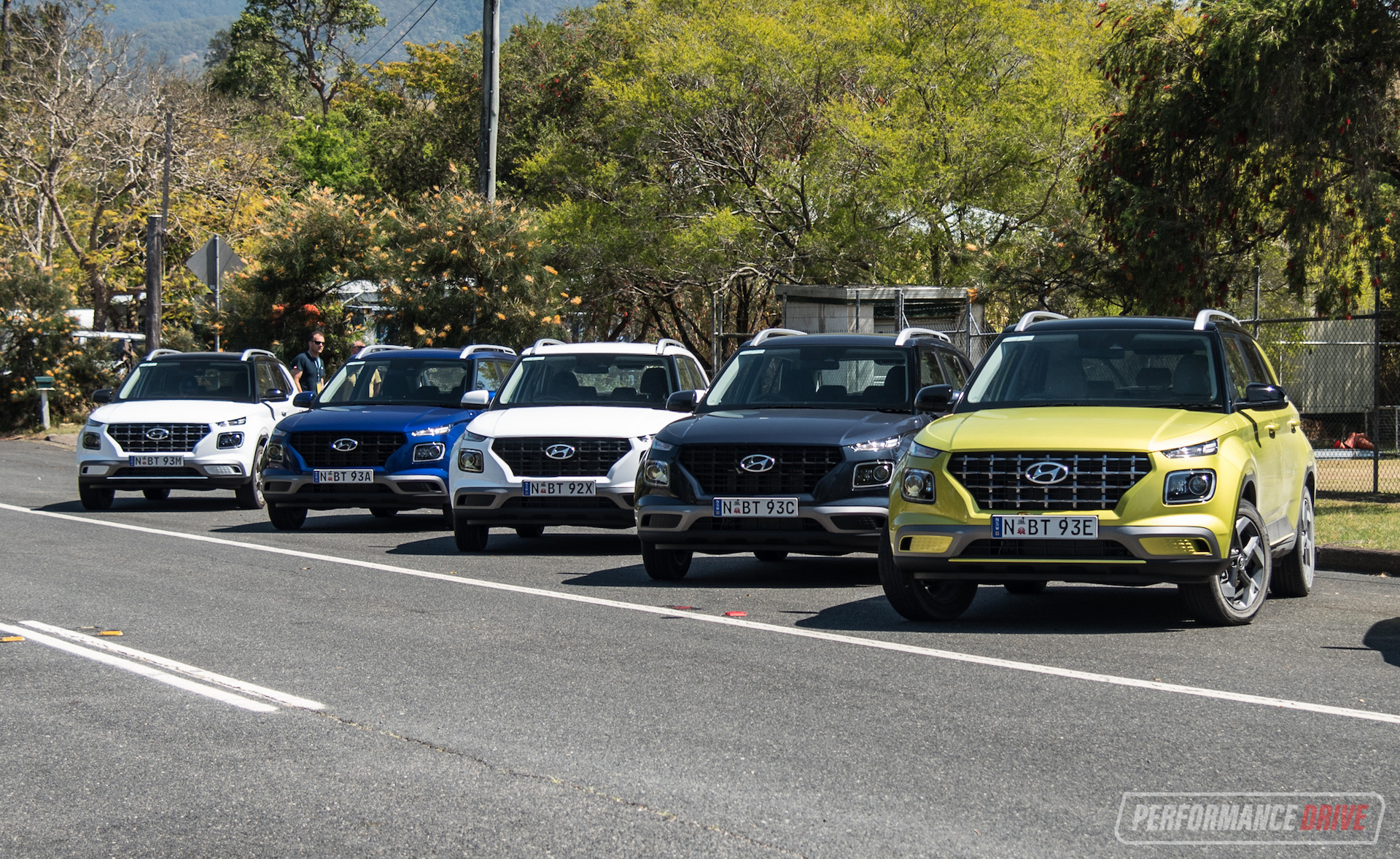 Not another small SUV. We know. But this is what the market wants. This is what you want. Even if you say you don’t. Deep down, this is exactly what you want. Can you blame Hyundai for serving to market demands? We better take a proper look. 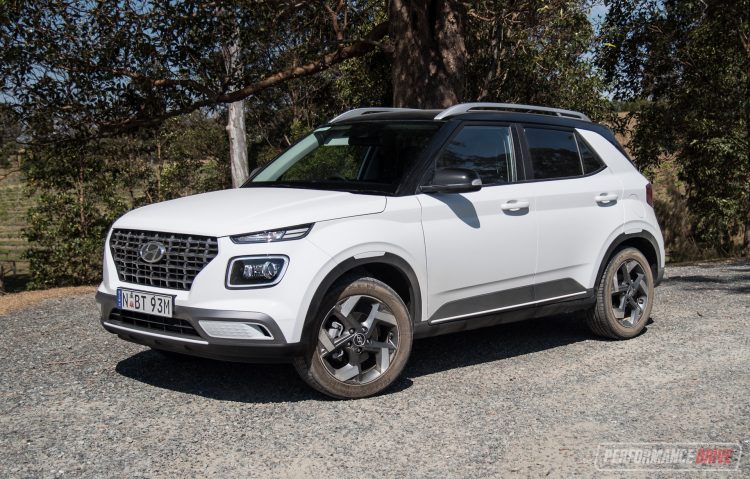 To be clear, this, the Hyundai Venue, is a compact SUV that competes in the ‘SUV small below $40,000’ class, according to the Federal Chamber of Automotive Industries. So that’s the same class as everything from the Holden Trax, Honda HR-V, Jeep Compass, Mazda CX-3, Mitsubishi ASX, Nissan Qashqai, Suzuki Jimny, Suzuki Vitara, Toyota C-HR, and, the Hyundai Kona. And that’s not even all of them.

Aside from this year, which is seeing a downturn of 8.0 per cent in new vehicle sales so far (through August), this small SUV segment is the fastest-growing of all SUV classes, and one of the fastest-growing overall in Australia. During 2018 the segment reported a whopping 17.2 per cent increase in sales compared with the previous year (the premium ‘SUV small above $40k’ class actually saw a 28.1 per cent rise). That’s more than the medium SUV class (up 5.7 per cent), and more than the coveted 4×4 ute class (up 4.7 per cent).

Australia is one of the first markets to receive the Venue, following a recent launch in India. America will soon welcome it, too. Amazingly, since launching in India it has become the best-selling SUV in that region, outright. That’s an incredible effort, especially for a brand new, unestablished model.

In Australia there are three main trim levels, as recently announced, running from the Go, the Active, to the top Elite. All are powered by a 1.6-litre petrol four-cylinder (other engines are offered overseas) that produces a petite 90kW and 151Nm. You can get it with a six-speed manual (Go and Active only), or a six-speed auto. All are front-wheel drive. 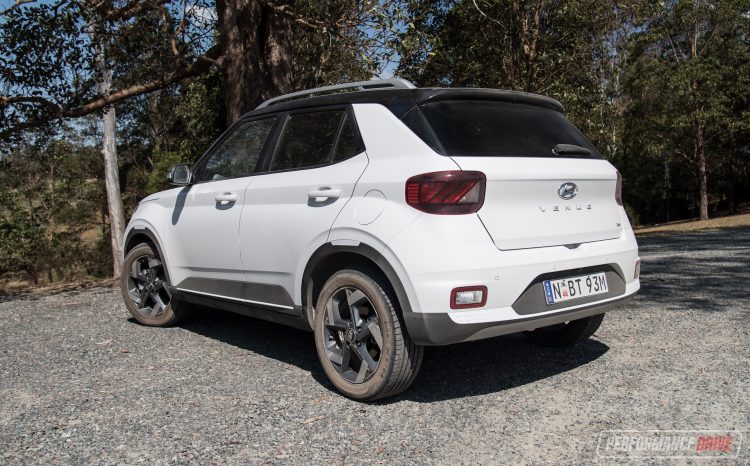 We won’t go through this whole review and compare it to the Kona, even though that might be the first thing that spikes your curiosity. But just quickly, the Venue presents a more upright cabin orientation, with what feels like a taller ceiling inside. The seats are also mounted at a higher position, and the pillars aren’t as raked, making it easier to get in and out out.

As a result, the cabin actually feels a bit roomier and certainly more open and airy. The boot measures 355L, which isn’t far behind the Kona’s 361L capacity. Obviously all of this means the Venue doesn’t present the curvy, coupe-like profile on the outside like the Kona. 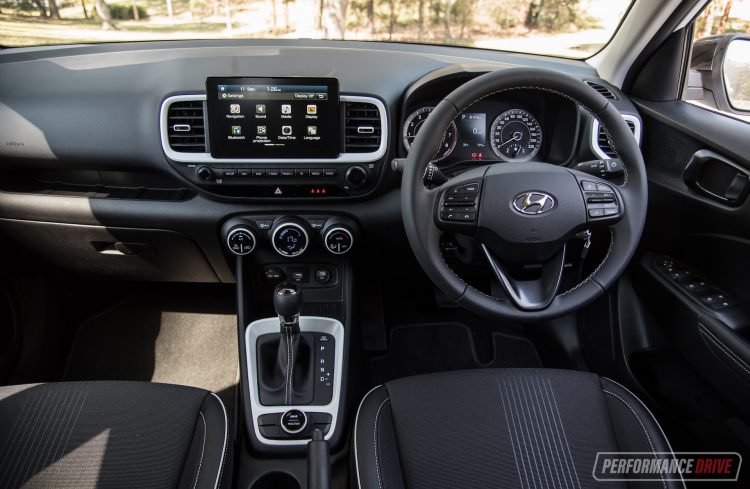 From the outside the Venue looks like a rugged little go-getter in our opinion. Its plucky stance with short front and rear overhangs give it the stature of an off-road vehicle, and the pumped wheel arches add some macho character. We reckon it looks good in the metal, with modern fixtures and panel contours.

Well, that’s if you look at anything but the base model Go. The Go uses teeny tiny 15-inch steel wheels with hub-caps. Without meaning to sound racist, they make the Venue look like a cheap-and-nasty Chinese car, or one of those blatant rip-offs with proportions that aren’t quite right. 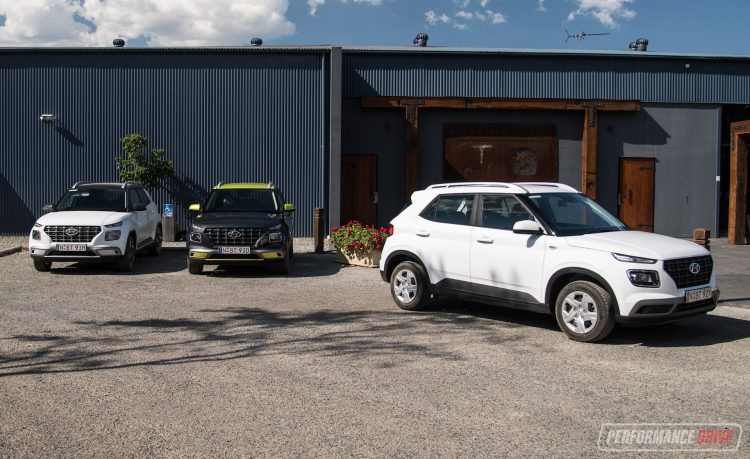 The Go is pitched toward the budget-conscious buyer. Prices start from $19,990 for the manual, which, on paper, is very attractive. However, you do have to put up with some unpleasant sacrifices, such as a plastic steering wheel and gear lever, a four-speaker sound system (six in the others), as well as a lack of a centre armrest/storage box in the front. 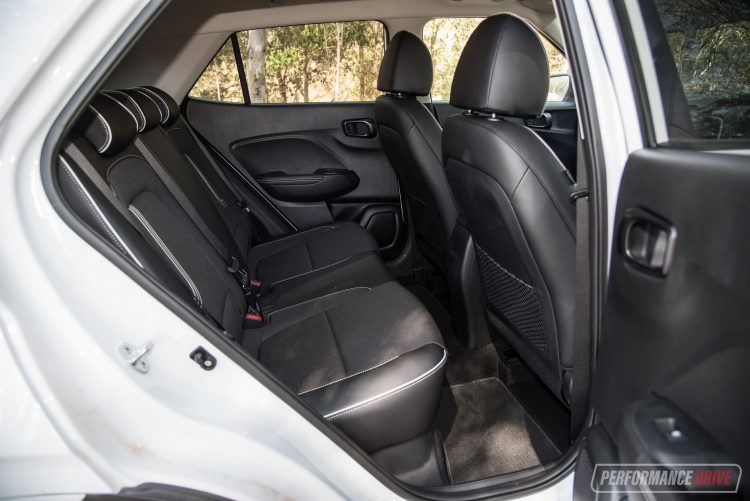 If you can’t already tell, we’re discouraging the idea of going for the Go variant. Both of the others are quite well packaged overall, particularly for this class. There’s an 8.0-inch touch-screen media interface for all variants, with Android Auto and Apple CarPlay as standard, digital radio and sat-nav for the Elite, LED daytime running lights for the Active and Elite (Halogen for the Go), and power folding side mirrors for the Active and Elite.

Stepping up to the Elite brings in a fashionable two-tone roof and mirrors, as well as live traffic updates, and bonus safety tech like blind-spot warning and rear cross-traffic alert. All models are impressively equipped in this department, though. All come with Hyundai’s SmartSense suite which includes autonomous emergency braking with pedestrian detection, along with a rear-view camera, and even lane-keep assist (auto steering input). 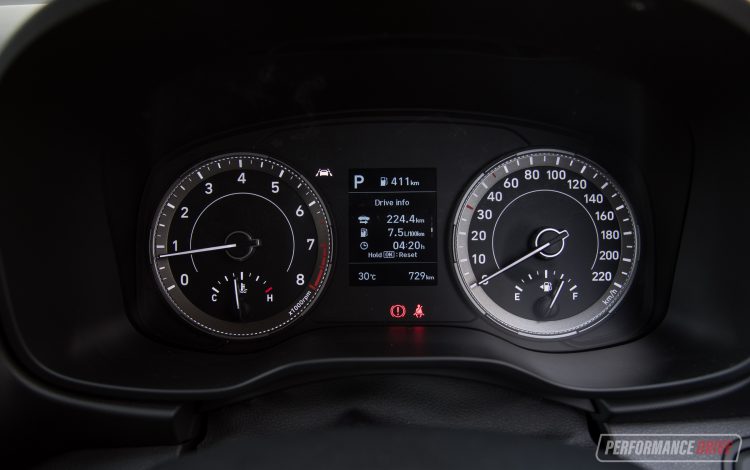 With that tall cabin orientation the visibility is great. This has to be one of the easiest cars to park, put it that way. You can see straight over the bonnet and doors, making it easy to predict where the wheels are placed on the road. In that sense, there is a degree of confidence added to your drive, especially in tight city conditions.

Hyundai’s local team have conducted extensive tuning on local soil to make sure the Venue lives up to our tough standards. And the results speak for themselves. This offers a great ride and plenty of control and composure for this class. You can smash over potholes and ripples on the road and the Venue won’t crash or shutter, despite featuring a basic torsion beam rear suspension layout. 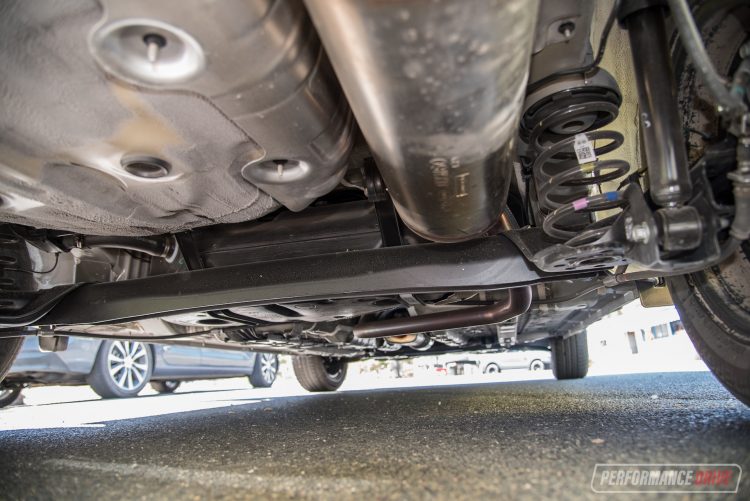 Push it harder and you’ll find the Venue can be quite fun to thread down a series of S-bends. We had the pleasure of tackling some nice hilly roads in the hinterland between the Sunshine Coast and Brisbane during the official launch event. You probably won’t believe us, but we think this car handles really well for this segment.

The high centre of gravity means you can tip it into corners and experience some playfulness and action, but it never comes across as nervous or unsettling. It leans for a bit and then stays at a certain point. Throw it back the other way and it’s almost like dancing. Some vehicles in this segment handle with a bit more composure, like the CX-3, and some can lack engagement altogether, like the ASX. In our opinion, the Venue walks somewhere in between these two. 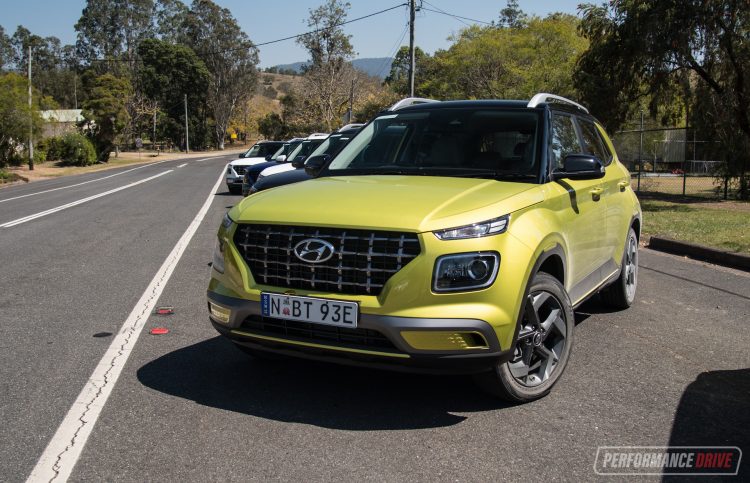 As for the performance. Well, you know this isn’t going to be a fast car. After all, it wasn’t designed to be. In saying that, our testing showed decent acceleration figures for this class. Using our Racelogic Vbox Sport we clocked a best 0-100km/h run of 10.13 seconds in the manual, and 10.26 seconds in the auto. These times aren’t blistering, obviously, but compared with the rivals they aren’t bad at all.

The manual is the pick for driving enthusiasts, but the auto is going to be a lot more popular. And that’s fine. It is a smooth-shifting transmission, and thanks to comprehensive sound-deadening materials and insulation built into the Venue’s construction, the powertrain is quiet and refined for what it is.

We know it’s a popular phrase at the moment but the Venue is what it is. It’s charmingly simplistic, yet ambitious and successful in many areas that are important for this class; it’s great value, lots of fun to drive thanks to locally-tuned suspension, and it is very practical inside. Our advice is to try and step up to the Active if you can as the Go is very basic.

As always, if you’re thinking about buying a new car don’t forget to click here to speak with our car buying specialists to find a great deal.