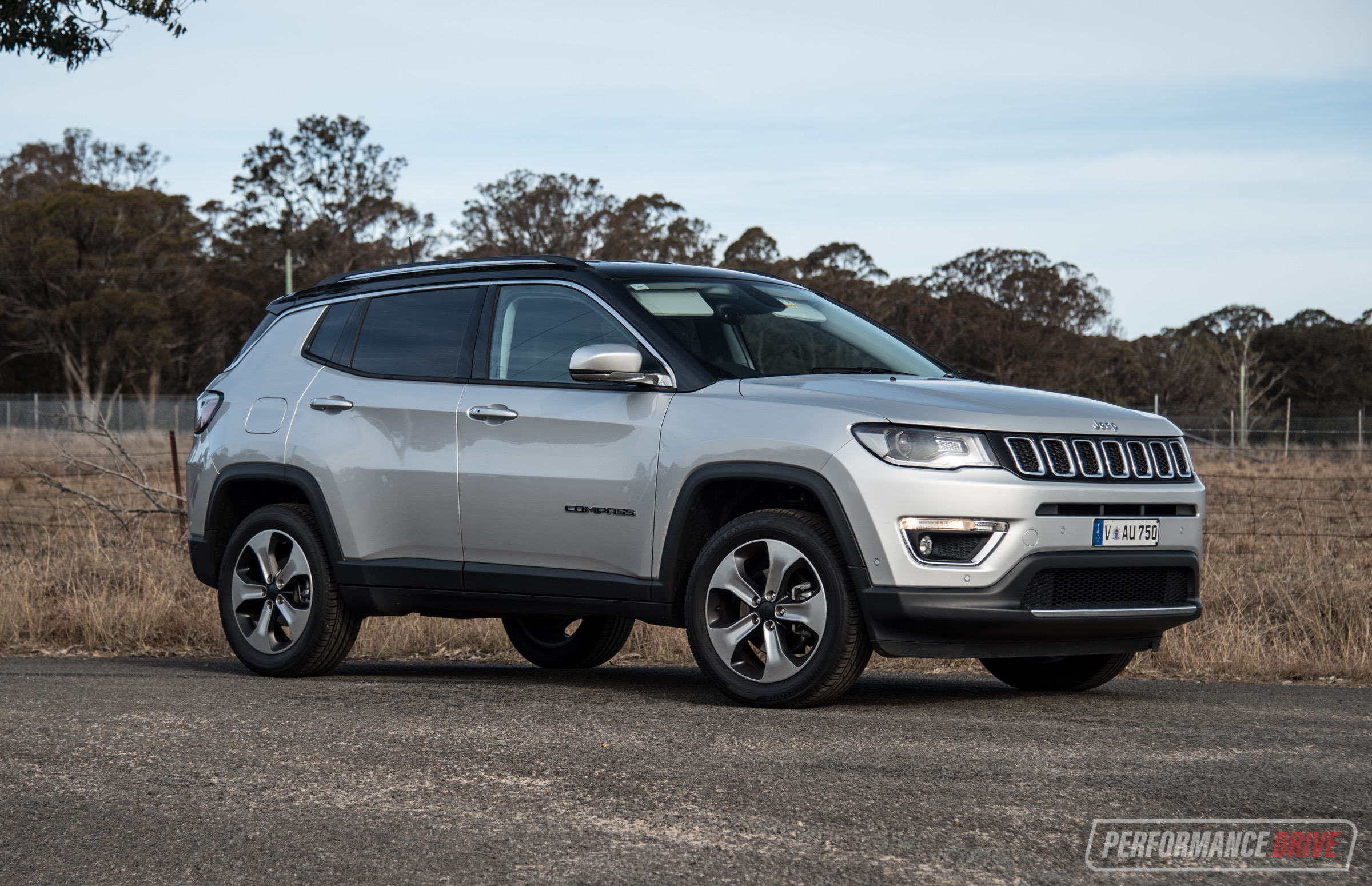 Slotted between the Jeep Renegade and the Jeep Cherokee, the 2018 Jeep Compass is a five-seat SUV that faces fierce rivals such as the Hyundai Tuscon, Honda CR-V and best-selling-of-them-all Mazda CX-5. 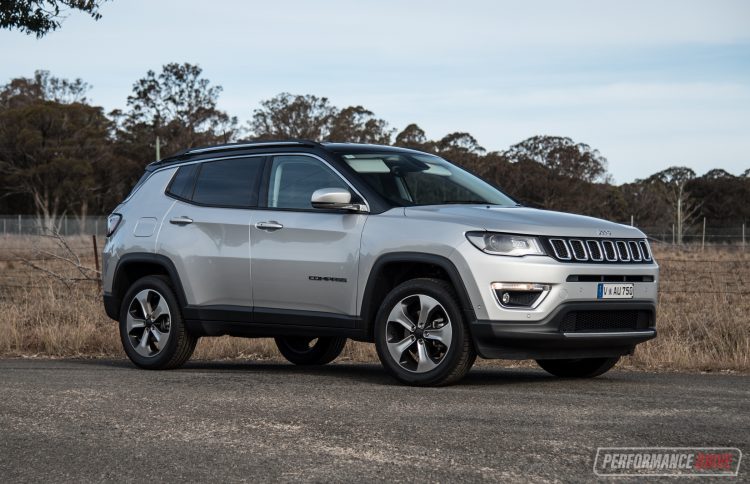 The 2018 Compass is far removed from the Compass it replaces. This new model looks a lot more rounded and has an upmarket feel about it – especially inside. It also comes with Jeep’s new five-year warranty and lifetime roadside assistance coverage. A bit like the equivalent predecessors, the new model takes its styling inspiration from the larger Jeep models, but in a smaller, more city-friendly proportion.

Prices start at $28,850, which buys you the base, front-wheel drive manual Sport model. It’s not until you step up to the $41,250 Limited model we’re testing here that four-wheel drive comes as standard equipment. 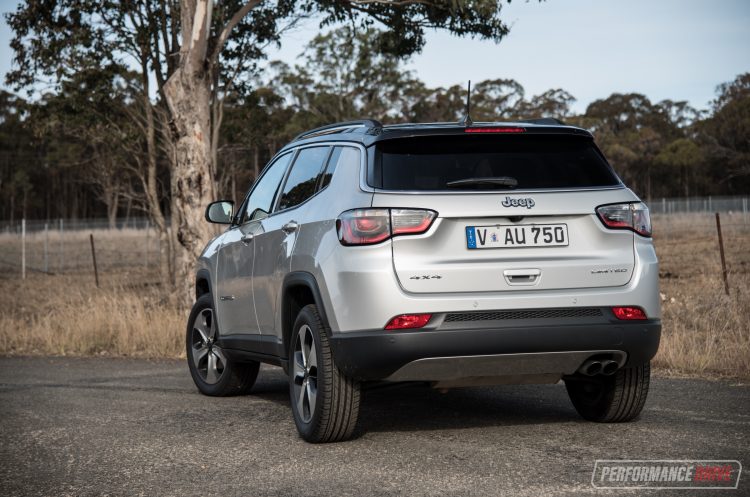 Buyers are offered with a 129kW and 229Nm 2.4-litre petrol four-cylinder, which is what we’re testing here. You can also pay a little extra ($2500 more) for a 2.0-litre turbo-diesel variant that produces 125kW and 350Nm. Though, we didn’t review the diesel model, it’s hard to deny just how handy that extra torque would be.

Moving inside, the Jeep Compass Limited presents a welcoming, functional and tech-savvy cabin, with a hint of luxury. It all feels pretty solid and well-built, and most of the surfaces and materials are nice to touch. Although, the overall decor is quite mono-tone with some tacky chrome highlights for the switchgear harking back to its American genes. 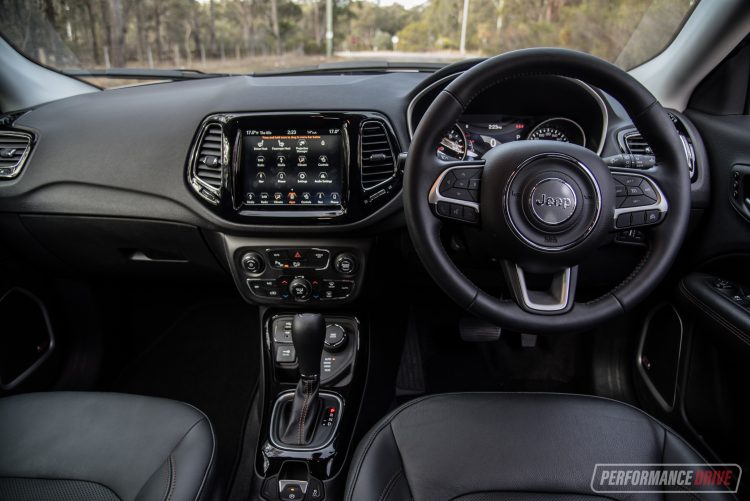 In terms of comfort, the front seats are a little underwhelming and could do with more lateral support. This kind of spoils what is otherwise a roomy and practical interior package for a vehicle in this market segment. The rear seat also offers decent room for adults, but can become a bit squeezy if you try for three side by side.

The infotainment system in the Compass is Jeep’s very admirable Uconnect system. The huge, portrait-layout 8.4-inch touch-screen offers excellent clarity, with all of the menus clearly laid out. We’ve always enjoyed using Uconnect systems in Jeeps and Chryslers of the past, and in the latest Compass, we’d have to say it is one of the better systems on offer in this space at the moment. 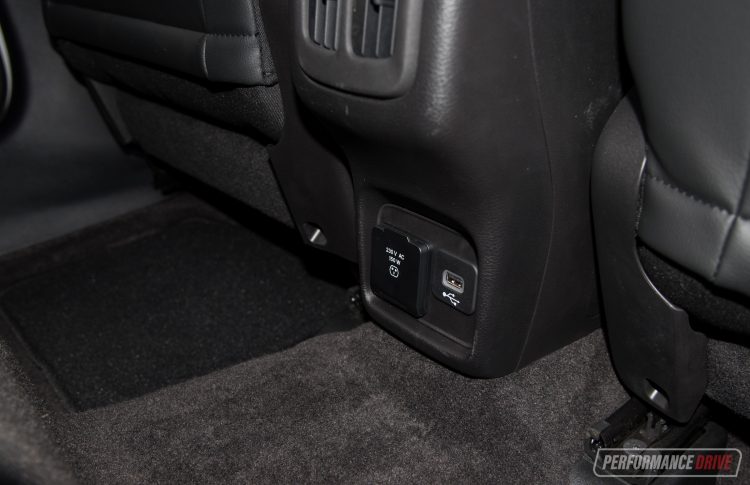 Buyers with vast storage requirements will appreciate the concealed space under the front passenger seat, while coffee drinkers will enjoy the deep cup holders. Rear passengers are treated to a USB port and 150W AC socket on the back of the centre console – perfect to keep an iPad charged when traveling.

Boot space is rated at 438 litres in the default rear seat position, which is about average volume for this class. That said, this is an SUV that measures under 4.4 metres long, so don’t expect miracles when you’re picking up that large-screen TV you want. 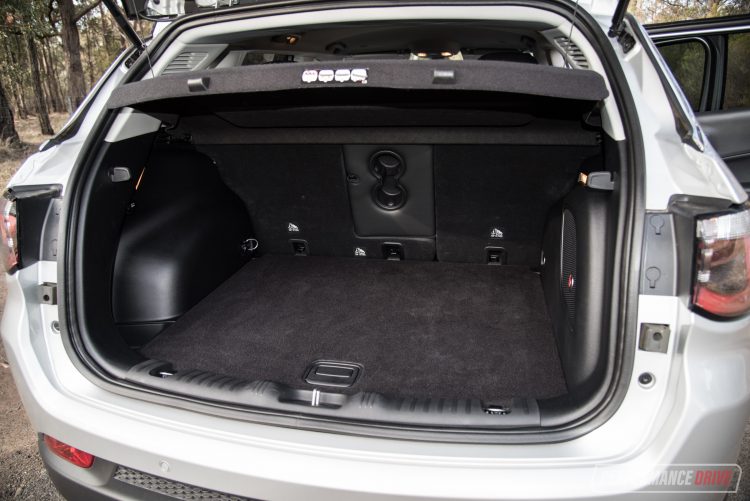 We’d have to say ride comfort is one of the main standouts of the Compass. It soaks up ordinary roads with gentle absorption, perhaps reflecting its ground clearance and off-road eagerness. It also turns into a pretty capable handling SUV should you force it down a twisty section of road. It’s no sports car, but it’s fun enough for a ‘4×4’ to enjoy a sweeping bend or two.

The steering offers a nice weight balance, with excellent feel around town and a reassuring solidness out on the freeway. This translates to a high level of confidence from the driver’s seat, allowing you to make last minute manoeuvres when and where needed. Body stability and composure is relatively good for this class, especially considering there’s 212mm of ground clearance to manage.

Up front, the 2.4-litre four-cylinder petrol engine is no powerhouse, and nor does it sound all that enthusiastic, but it smoothly delivers that 129kW of power. You do notice the lack of torque when you’re up in the higher gears and trying to overtake on the highway, and our 0-100km/h testing returned a less-than-enthusiastic sprint time of 10.85 seconds. Our recommendation would be to go for the diesel if you think any of this would bother you. 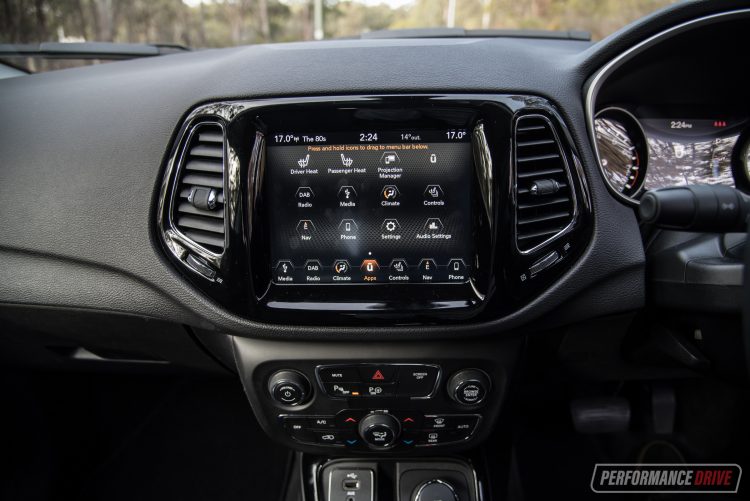 Part of the reason the power delivery is smooth is thanks to the nine-speed automatic gearbox that comes as standard in the Limited model. In fact, the only model that doesn’t come standard with the auto gearbox is the $28,850 Compass Sport base model we mentioned above. What doesn’t come as standard are some important safety systems, such as autonomous emergency braking. Radar cruise control is also missing for what is a fairly high-grade model. Fortunately, ANCAP has awarded five stars for all models.

Jeep claims 9.7L/100km as the official combined fuel consumption, but during our week with the Indian-made Compass 2.4 we saw numbers hover round the 11L/100km region. Again, another reason to go for the diesel model (if you need another one) is the fact fuel consumption for the combined trip is rated at almost half that of the petrol model, with an official average of 5.7L/100km.

While we didn’t do any hardcore off-roading during out time with the Compass Limited 4×4, we did use it down quite a long, twisty unsealed road. Never did we feel like it lost its composure, even when pushed. In fact, the Compass gives a bit of an inkling that if you faced some rougher, bumpier terrain it would more than likely be up to the job. This is a sense that’s really only exclusive to the Compass.

The 2018 Jeep Compass Limited is a much better car than the one it replaces. The jury is still out as to whether it’s pick of the bunch in this vehicle segment, but the improvements should be applauded.

We like the design, there’s no denying that. Especially with the optional $495 black roof finish (as featured on our test model). Whereas some of the other vehicles in its segment feel like pure city SUVs, the Compass gives you the impression that it’s as ready for a weekend away down a beaten track.

If you are planning on taking it off road, though, best to spend the extra money on the diesel variant as its higher torque would definitely come in handy we think.

PROS:
– Tough looks for the segment
– Big Uconnect touch-screen is great
– One of the segment’s better off-roaders
– 5-year warranty