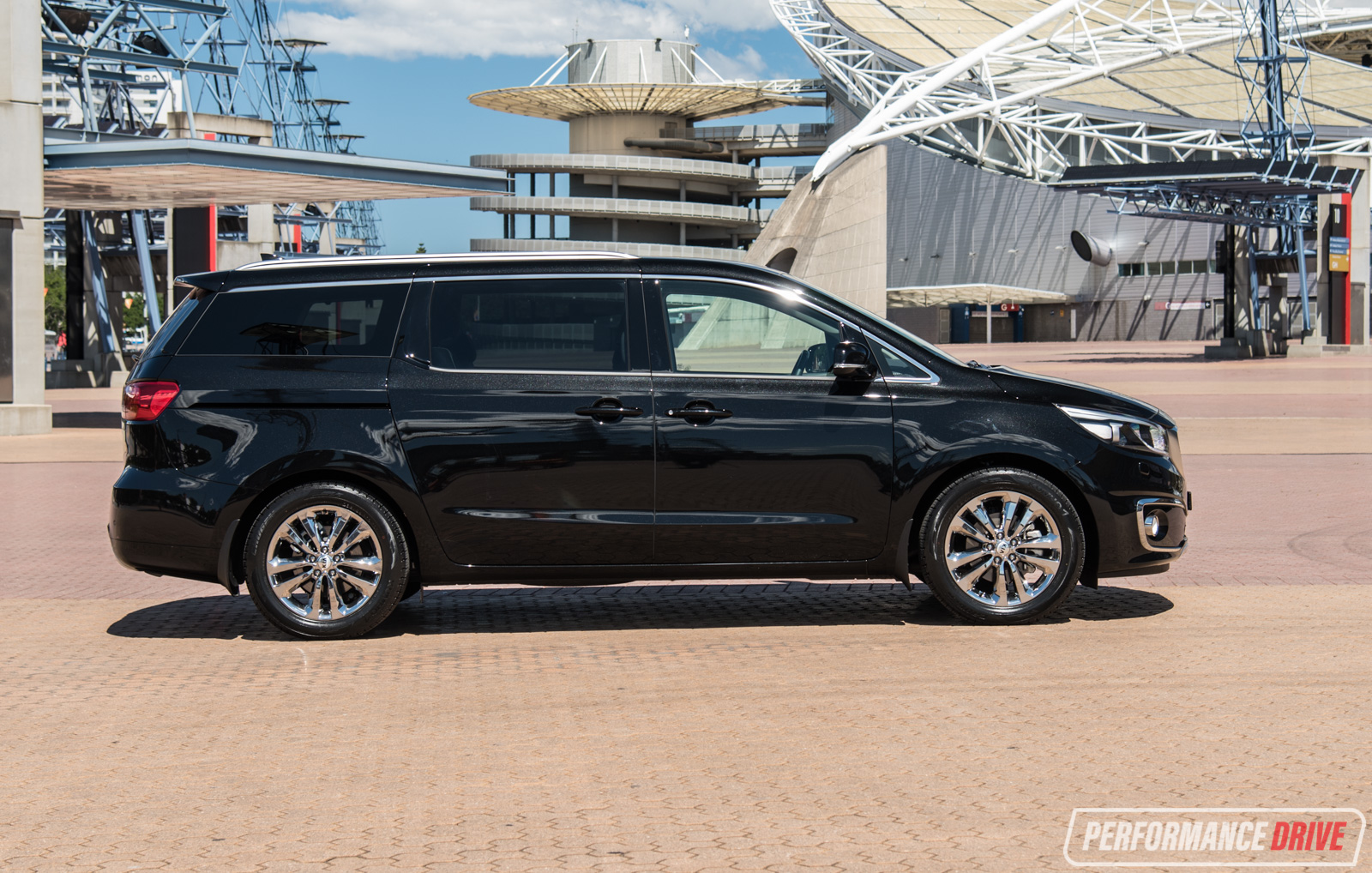 A carnival ride can be a very fun, memorable experience for the whole family while others can be let down by cheap-looking attractions and mediocre plastic gimmicks, like a yawn-inducing ghost train ride. The Kia Carnival used to fall into the latter category. 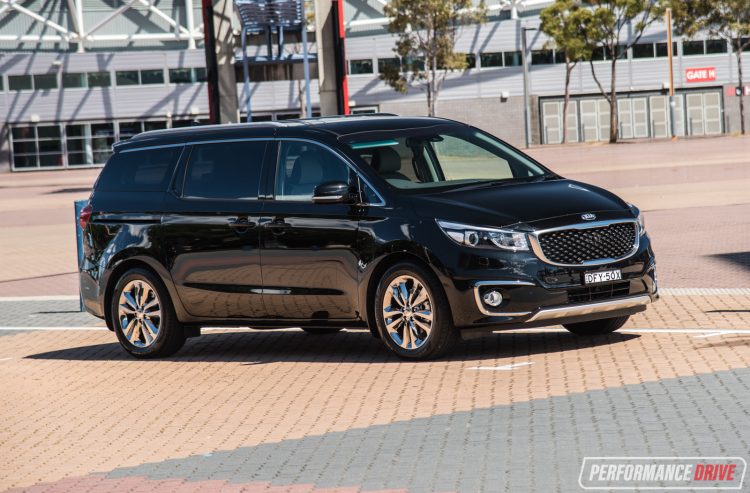 Not anymore. The 2016 Kia Carnival Platinum is a whole new kinda ride, promising luxury, safety and utility that leaves SUVs for dead. As we recently discovered with the 2016 Toyota Tarago Ultima, MPVs have a way of maximising space that you just don’t get with a style-conscious urban tractor.

Kia promises wide-ranging improvements including 74 per cent increased chassis rigidity as well as major leaps forward in drivability and refinement. We gave it a thorough examination to determine whether it lives up to these promises. 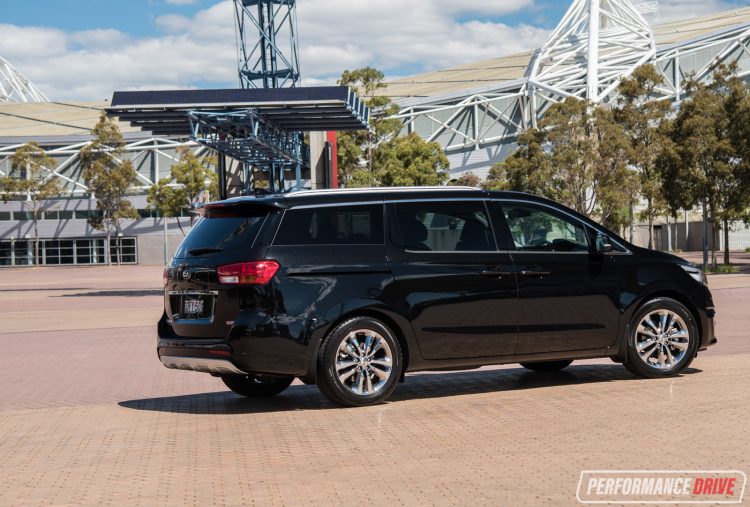 The 2016 Carnival starts from $41,490 for the V6 S, which, at 5115mm long, 1755mm tall and 1985mm wide on a 3060mm wheelbase, represents a huge amount of metal and space for the money. Nothing else can match these figures for such little outlay. In fact, to get a more capacious van you’d have to spend $87,200 on a Mercedes-Benz V-Class with its 3200mm wheelbase. People know it too, which is why Carnival has a 41.6 per cent share of the people mover market in Australia.

The Carnival is a porker, though, at 2100kg (kerb), some 170kg heavier than the Tarago Ultima, which is also 305mm shorter with a wheelbase only 110mm shorter. All that bulk does make it somewhat difficult to park.

The Si starts from $45,490 and adds things like front parking sensors and surround view, which alleviates any concerns about the sheer size of the thing. The base S comes only with a rear-view camera and sensors. 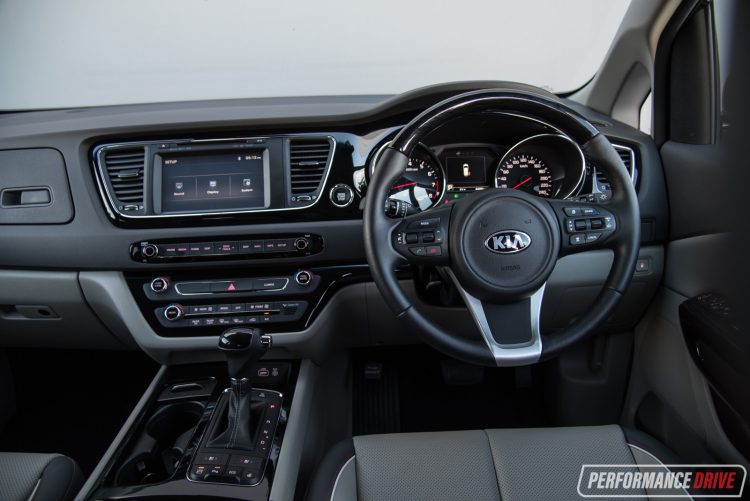 As for the Platinum, it kicks off from $58,790 for this V6 version. It is steep, but again, the amount of car your get for the money does justify it, especially if you compare it with other luxury or luxury-minded large vehicles. Unfortunately a power moonroof is conspicuously absent, unlike the US-market version.

The basic package is well built and high quality, with a logical and user-friendly interior. The leather and panel gaps are in line with what you’d expect from a $58,790 car. We particularly enjoy the two-tone theme on this test car with cream leather. Heated and cooled seats are a delight to use, while the heated steering wheel is great for barmy nights.

Stylistically, the Peter Schreyer-penned design is taut and clean, making it potentially the nicest-looking MPV, aside from maybe the Chrysler Pacifica – unconfirmed for Australia. Chrome 19-inch alloys set off the yakuza black paintjob, giving it an unexpected presence.

You sit nice and high, overlooking a broad switchboard of neat controls that have a nicely damped press to them. Some things seem more attuned to left-hand drive, like the volume and tuning knobs being on the wrong side, but overall the main audio and stereo controls can be adjusted without looking down. In the instrument cluster there’s an array of trip computer functions including a handy digital speedometer.

The second and third row are treated to their own overhead vents with adjustable temperature in the second row. Access is via large power-operated sliding doors on both sides that can be controlled via the key fob or inside the car, giving the Carnival wide open entry for all.

The third row stows flush into the floor thanks to a clever hand fold mechanism, while the second row of seats slides against the front row with the pull of a lever. It’s all highly configurable with a sliding second row and reclining seats for every position. Cargo volume can open up from 960L to a whopping 4200L. 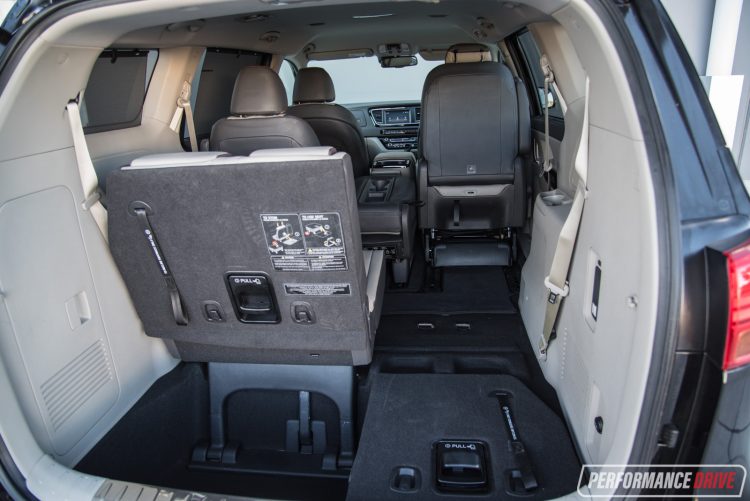 Being a V6 propelling over two tonnes, we expected the Carnival to be heavy, numb and thirsty. This is not the case, as the Carnival impresses with relatively taut body control (for such a large car), direct steering and good bump absorption. The hydraulic steering does feel a bit wishy-washy with sudden high-speed manoeuvres but is otherwise confident and effortless.

The 3.3-litre ‘Lambda’ V6 has a zingy top end giving the Carnival a surprising turn of speed and is maybe 95 per cent as smooth and aurally pleasing as Toyota’s 2GR V6 featured in the Tarago. With peak torque coming in at 5200rpm, it does require lots of revs to really get going. We timed 0-100km/h in 8.59 seconds.

Fuel consumption is actually superior to the claim of 11.6L/100km, which is impressive. We averaged around 11L/100km during our week. We can only imagine the R-series diesel engine option is the more flexible and usable choice in the real world, though, even if it lacks the V6’s sweeter note. Having driven this unit in other Hyundai and Kia vehicles we can attest to its grunty nature and efficiency. We also suspect the 440Nm torque output would lend itself better to the hefty Carnival.

The six-speed automatic seems well adapted for most situations without hunting or hesitation. Paired with the standard radar cruise control on the Platinum though, the gearbox can have a tendency to suddenly kick-down. Also, the radar cruise is one of the crudest systems we’ve tested, automatically braking too early and then accelerating harshly just to climb back up 5-10km/h, for example. 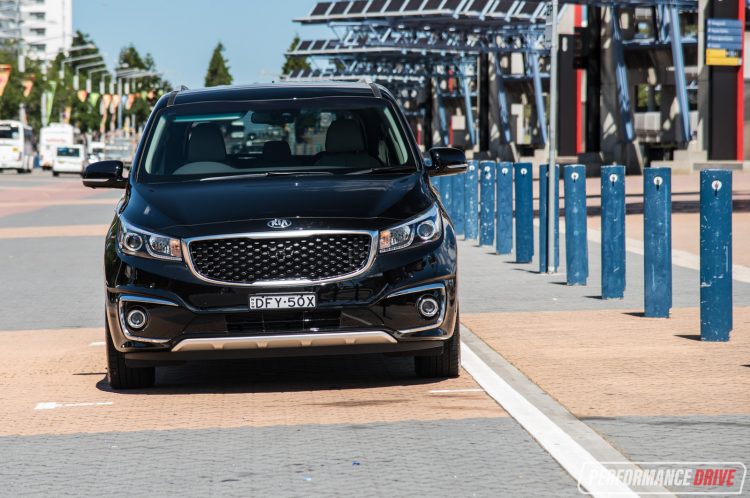 The $29,990 LDV G10 and $40,790 Hyundai iMax are slightly larger dimensionally but are both based on commerical vehicles and lack the polish of the Carnival. The $45,490 Tarago GLi has a wheezy four-cylinder engine and is positively geriatric in comparison.

The Platinum here feels genuinely luxurious and pampers all of its occupants for the price. The more value oriented S would be the pick if it had the surround-view camera to make parking easier, but as it doesn’t perhaps the Si is the sweet spot of the range. Price conscious customers would be encouraged to haggle for the diesel and check they do enough kilometres to offset the $2500 premium.

All said, the Carnival is a trusty and highly versatile family cruiser that doesn’t feel cumbersome to drive. Add in the knockout punch of a seven-year/unlimited km warranty with roadside assist and you can see why 3720 have been snapped up this year to make it the dominant player in its sector (September VFACTS). There is no other MPV with this combination of attributes for this price at this size, unless Toyota gets back to the drawing board for a well overdue Tarago redesign.