You may have heard of the Porsche 911 GT3 RSR race cars. Well, the wicked Champion Motorsports Porsche 911 RSR is one for the road. It features the full fat bodykit and plenty of getup and go in the engine compartment. 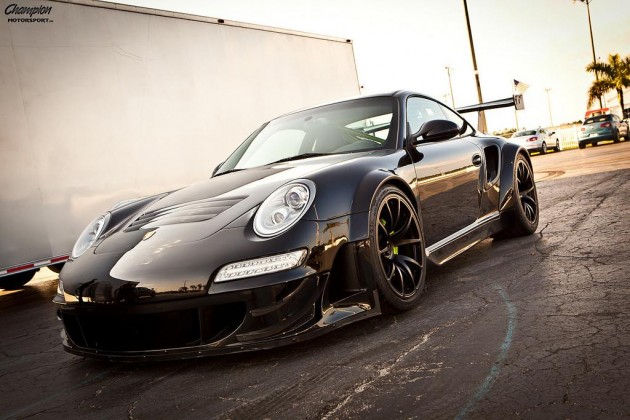 The monster is based on the 997 Porsche 911 Turbo, featuring the 3.8-litre flat-six twin-turbo engine. Power has been boosted of course, to match the imposing bodykit, primarily with the help of two new VTG turbochargers and a straight-through exhaust system.

In standard form the Turbo produces 368kW at the engine, after the new turbochargers are added and some revisions are made to the ECU, this custom RSR creation pumps out 429kW and 855Nm at the wheels. It’s no wonder really that Champion Motorsports has fit a complete RSR-style bodykit. 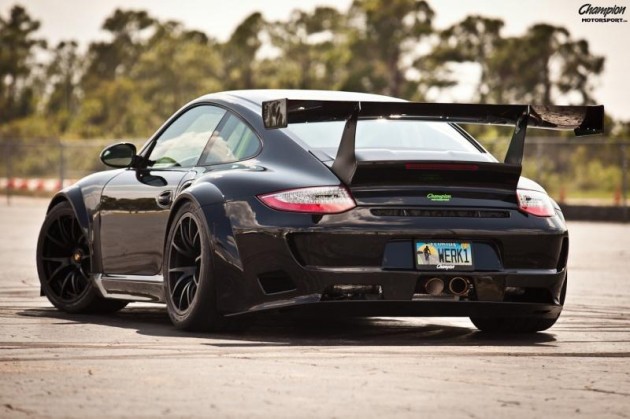 The custom-built kit has been developed from scratch, with new wheel wells and heavily pumped guards. The kit guides airflow up and over, through, and out of all the critical aspects of the body and engine compartment. It also adds downforce to increase grip and stability. There’s a set of brake ducts to aid cooling too. Best yet, most of it is made from carbon fibre so it’s very lightweight.

To give it that perfect aggressive stance, and so it all handles around corners and under power, the Champion Motorsports Porsche 911 RSR features a set of fully adjustable Ohlins coilovers. The suspension keeps the company’s set of magnesium lightweight alloys firmly planted onto the tarmac.

Overall, it’s a mega kit, and one that would be perfect for scaring a few too-gooders off at a local track day.